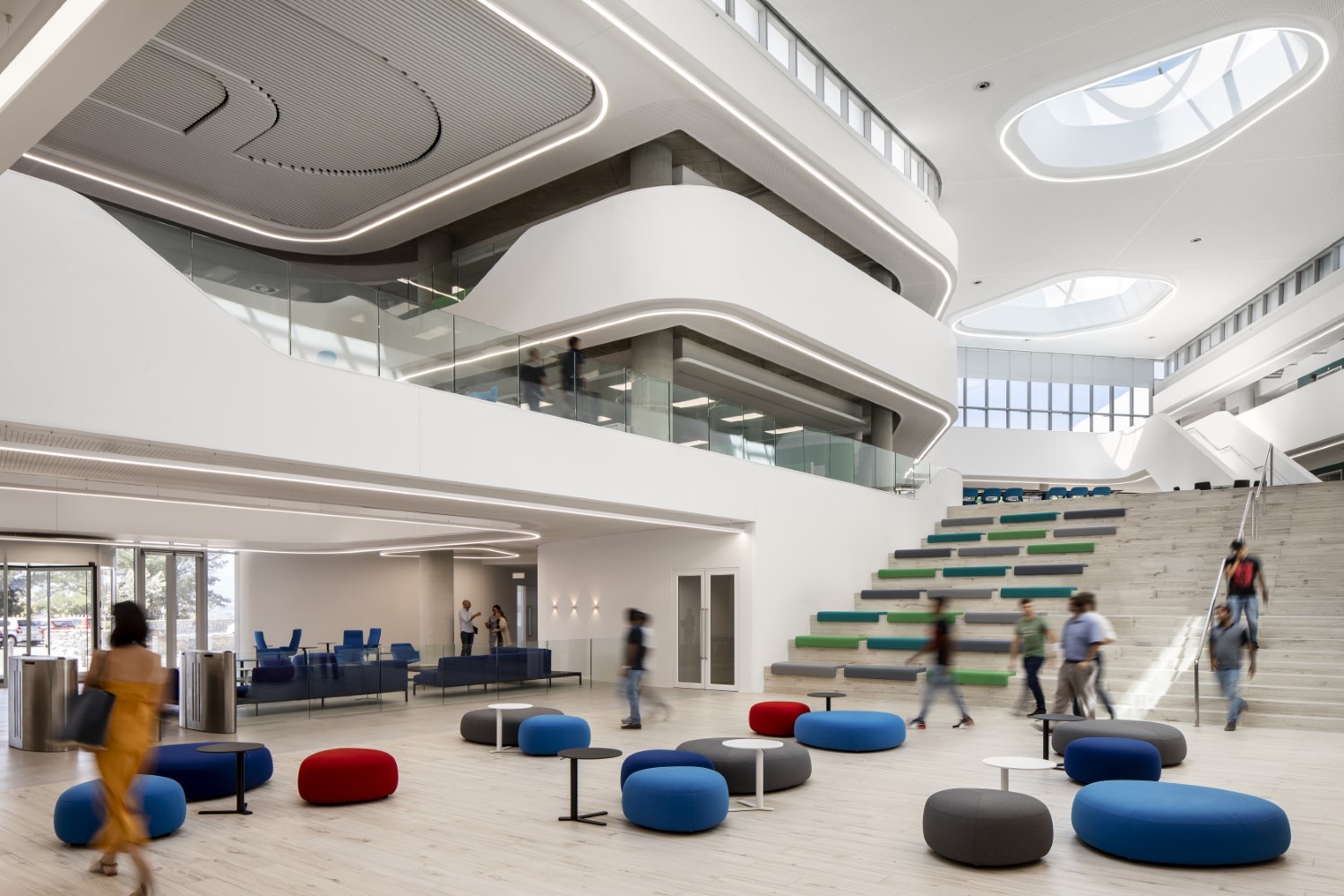 Capitec Bank, one of the largest and most progressive banks in Africa, has unveiled its innovative new headquarters, iKhaya, meaning ‘home’ in Xhosa.

Designed by multidisciplinary studio, dhk Architects, the three-storey curvilinear building is defined by its dynamic interior architecture, which embodies the company’s progressive outlook and embraces the concept of agile working. Striking and otherworldly, dhk’s holistic architectural approach considers both the exterior and interior to optimise corporate expenditure, internal flow and sustainability – demonstrating that commercial offices can be innovative and cost-effective while driving operational efficiencies.

Capitec’s success and growth over time meant that the company came to occupy numerous offices. These offices were geographically dispersed, resulting in departments becoming increasingly isolated  from one another with the need to move between buildings to meet face-to-face. Consequently, Capitec opted to consolidate its staff and facilities into one operationally efficient headquarters. Located in the scenic Cape Winelands in South Africa, a key driver of the design concept involved capturing panoramic vistas and drawing the landscape within.

The building form optimises the shape and size of the site while referencing the brand’s distinctive curved logo. The three-storey superstructure wraps around itself, which creates a unique ‘doughnut’ shape and forms a central triple-volume atrium – an internal ‘social spine’ at the heart of the building. Contributing to the contemporary appearance, white aluminium panels clad the building’s sinuous form which is further accentuated with continuous ribbons of fenestration.

Internally, the design resonates with the company’s progressive outlook – ensuring guests and staff unequivocally feel the spirit of the brand throughout the building. Once at reception, visitors are greeted by a generous triple-volume space that immediately showcases the sophistication and simplicity of the interior architecture. Wide open-plan floor plates loop around the periphery of the atrium which are connected by a series of dramatic bridges and staircases. This was an intentional design element which inter-connects the various departments, creating opportunities for chance collaborative encounters and personal interactions.

Reinforcing Capitec’s brand identity, the company logo is embossed into the ceiling above reception. Overhead, clerestory windows and large roof lights ensure plentiful natural light and further facilitate the connection to the outside world. Meanwhile, touches of timber have been added throughout the office to introduce a feeling of warmth.

The new headquarters by dhk fosters a company culture of creativity, innovation and collaboration with a large emphasis placed on optimising internal flow and departmental interaction. The first and second floors, containing the office’s open-plan work areas, are largely void of hierarchal structure and closed-off cubicles. Embracing the concept of agile working, a raised access floor throughout the building facilitates maintenance and future upgrades to services. On each level, a total of four ‘cores’, containing centralized amenities such as kitchenettes, meeting rooms, breakout areas, lockers, bathrooms and fire escapes, serve to augment the floorplates into departmental zones.

Throughout the building’s ‘social spine’ there are a variety of breakaway areas; from a large ground-floor lounge at reception for guests to await meetings and co-workers to engage, to pause areas on bridges, and an internal landscaped courtyard for staff to rest. These spaces fuel creativity and innovation by allowing employees to slip away from their resident desks to enjoy a moment of solitude, conduct a private meeting or brainstorm ideas in small groups. Not only do these breakout areas increase job satisfaction, but they boost staff productivity and efficiency. Furthermore, there is a full-service kitchen and canteen area with ample seating, a small satellite café, and a grand multi-functional stadium staircase/seating area for company presentations and talks. Other useful facilities include a recording studio, Capitec Bank branch and an ATM lab facility.

Capitec championed environmental sustainability and employee well-being throughout the building, particularly where it made sense and value could be demonstrated. Natural light is optimised via clerestory glazing, roof lights and internal courtyard windows, while artificial lighting is zoned and activated by sensors. Environmental performance modelling directly influenced the articulation of the façade. The process informed areas of fenestration, glazing specification, glare control measures and solar shading. Performance modelling also informed the primary ordering of the internal layouts. For example, a circulation zone was provided along the external perimeter of the building to distance resident desks from sources of radiant heat.

To promote employee well-being, the building is purposefully limited to only two passenger lifts for its workforce of approximately 2,000. This is supplemented by a variety of generous feature stairs to encourage walking and limit the use of confined lift spaces. As such, the fire escape stairs were designed for dual functionality; where the quality of finishes were upgraded, they serve as ‘communication’ stairs. Further promoting employee well-being and to ensure that the needs of universal access were met, Capitec engaged with a disability consultant and an acoustic specialist early on in the design process. The recommendations of both specialists were incorporated into the building. For example, sound-absorbing materials and acoustic separation between meeting rooms were included throughout the building to achieve a specified performance in terms of decibel reduction.

Additionally, and beyond the requirements of the regulations, consideration of car parking locations, emergency evacuation, ablutions and vertical circulation, are all examples of how the spirit of universal and inclusive access have been addressed. Furthermore, Capitec rehabilitated a neighbouring area of public open space to be used by staff and the broader community as a recreational area for activities such as walking and running. Fittingly, the building also provides cyclist facilities and purpose-designed showers.

“Capitec is a renowned South African brand that highlights values of simplicity­, innovativeness and collaboration. dhk sought to create an extraordinary, world-class office that is progressive and relevant in the South African context – designed to be agile, drive productivity, increase operational efficiencies and ultimately reduce company operational expenditure”.

Peter Stokes, Partner at dhk and lead architect on the iKhaya project

Looking to the future, the development incorporates a car parking structure on an adjacent site that follows iKhaya’s core principles, designed for future adaptation into an office should there be a modal shift towards public transportation and less reliance on private cars.