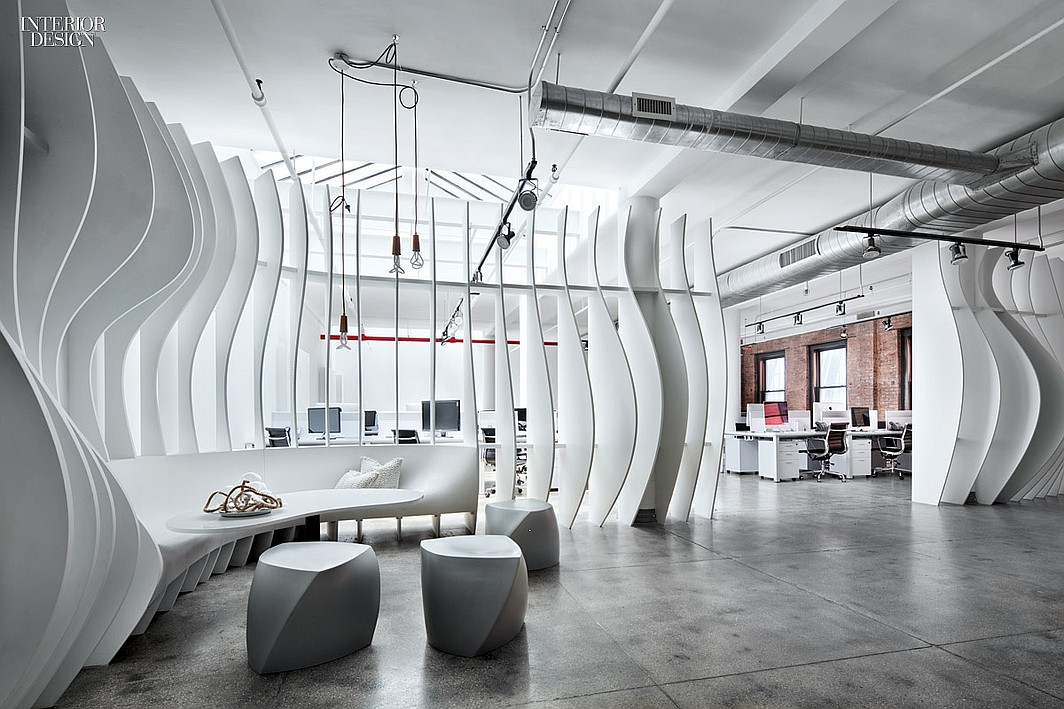 An initially empty industrial space was transformed to an amiable modern office for a digital Marketing firm in New York. The designer, Piret Johanson, drew on her background in fashion and modelling to create an elegant and inspiring work space that somehow feels pristine even with some of its previous industrial character exposed.

The prominent feature of the project would have to be the curvilinear walls and fins that meander through the space. The idea came from nature, with her citing that, “Things are never square in nature- think about the baby in the womb”. This is most evident in the form of the layout when looking at the design in plan. They create a sort of kidney bean sliced down the middle to allow for circulation space. The office comprises two free standing volumes, one enclosing the reception area and conference room while the other houses a smaller meeting room and private office which has a small ‘chaise-lounge-niche’ complete with reading light carved into it, just enough for someone to relax and recline in. This, was one of the many ways with which Johanson successfully translated the curves of the plan into the 3 dimensional space.
Citing that “Color would have been too much,” Johanson, painted her creations in a uniform high gloss white, probably most prominent on the feature that to me is most prominent -The full-height curved fins which form a divider between the lounge and workstations. These fins create a visual drama that is most appealing, trailing one another in a welcomed fluidity that is thankfully not as monotonous as one may expect. The furniture to support this elegant geometry within the lounge also does it part supremely well by becoming one with the space.
[via Interior Design]