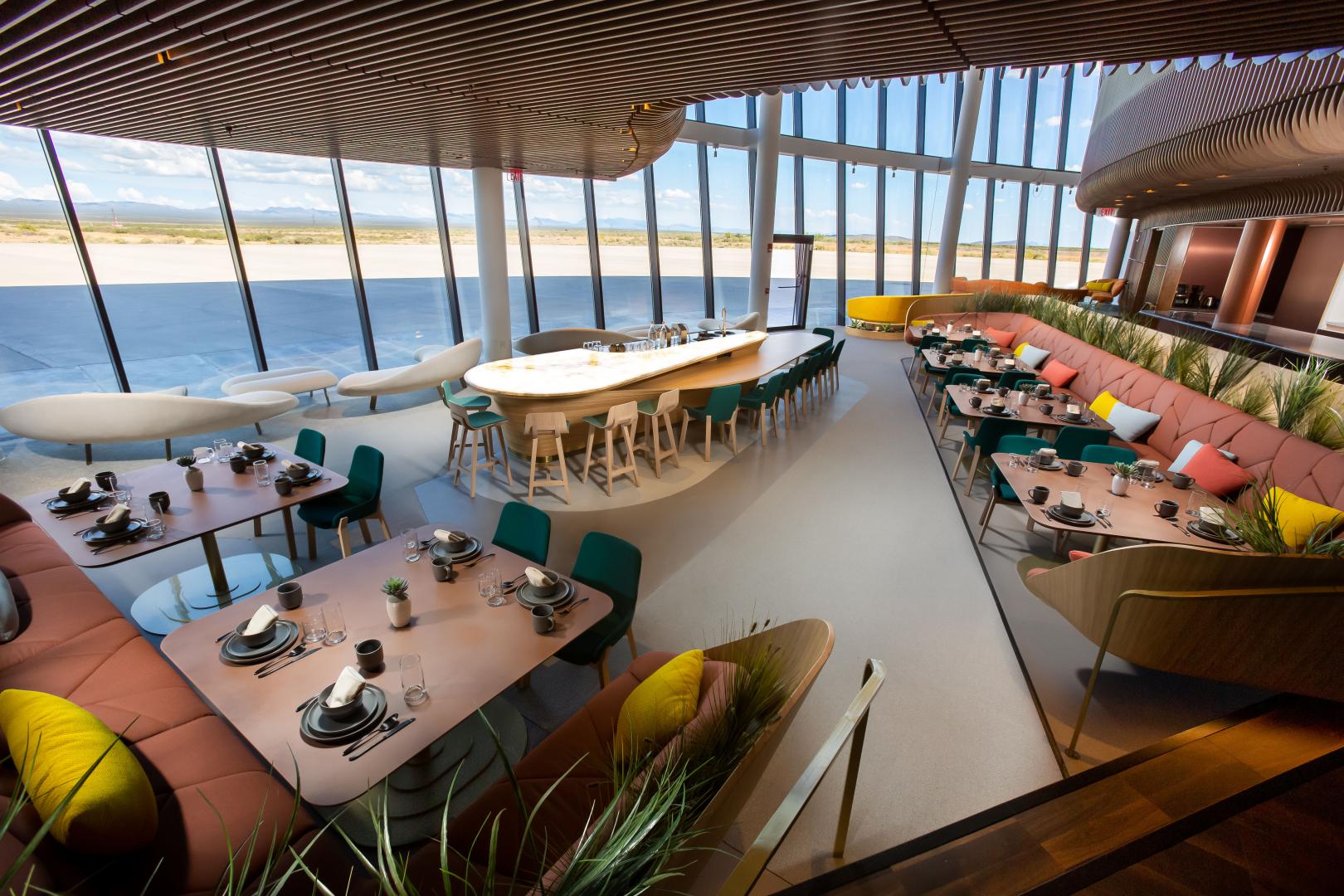 A first look at the Virgin Galactic ‘Gateway to Space’ Spaceport Interior Design.

Virgin Galactic last month revealed the first look at the interior fit-out of its Gateway to Space building at Spaceport America in New Mexico.

The work completed showcased two floors of the building primarily focused on spaceflight operations, which also incorporates communal spaces designed for use in the future by Virgin Galactic customers, along with their friends and families. Completion of this interior work means the spaceport facility is now operationally functional and able to support Virgin Galactic’s flight requirements.

The first floor is focused on our home planet, and is named Gaia, representing the point of departure and return, as well as the purpose of each astronaut’s journey. The color palettes and the use of natural materials aims to bring the stunning landscape which surrounds Spaceport inside. The floor design, furniture and fittings promote social interaction and
human discourse – a sense of togetherness and unity.

An elevated, interactive digital walkway will heighten the departure experience for the Future Astronauts and their friends and family as they set out from Spaceport to VSS Unity on the day of flight. The Earth-focused design will provide a fitting welcome to those newly-graduated astronauts returning from space with a new appreciation and understanding of our home planet.

Gaia is subtly and unobtrusively zoned into practical, formal and informal spaces which will host the space operations team, Future Astronauts and their family and friends. It serves as the social hub of the building, where everyone is part of the Virgin Galactic family; Future Astronauts will share breakfast with spaceship pilots, grab coffee with rocket engineers and pass the time of day with the team from Mission Control.

The focal point of Gaia is the Barista Island, a central bar made of back-lit Italian marble hovering above hand-crafted oak providing a social hub for our hospitality team to engage with guests and staff.

The second floor is named Cirrus, representing light, air and flight. It is the beating heart of spaceflight operations, and is connected to the community hub of Gaia below through a double height atrium. The color palette graduates from the earthy tones below in Gaia to lighter white and grey shades, reflecting the skies beyond and providing a clean environment supporting operational focus.

This area is home to Mission Control, the Mission Briefing Room, the Pilot Corps and the rest of the Flight Operations team. Mission Control enjoys a dedicated space which allows focus on flight operations. Outside this space, the Flight Operations team and the pilots are positioned to give an unrestricted view of ground operation areas including the apron and runway.

Virgin Galactic’s space fleet will be housed in the Gateway to Space hangar which is already home to VMS Eve. This huge expanse in the middle of the building is large enough to accommodate two carrier aircraft, each with a wingspan of 140 ft along with five SpaceShipTwo vehicles.

The unveiling of Gaia and Cirrus brings to life a beautiful, world-first and world-class facility and means that Spaceport America’s Gateway to Space is now functionally operational – ready to host the remaining portion of Virgin Galactic’s test flight program before welcoming its very first Future Astronauts.

Virgin Galactic and The Spaceship Company form a vertically-integrated aerospace company pioneering human spaceflight for private individuals and researchers. It believes the commercial exploration of space represents one of the most exciting and significant technology initiatives of our time. It is embarking on this commercial exploration journey with a mission to put humans into space and return them safely to earth on a routine, consistent and affordable basis. Using its proprietary and reusable technologies, and supported by a distinctive, Virgin–branded customer experience, it is developing a spaceflight system designed to offer customers a unique, multi-day experience culminating in a spaceflight that includes several minutes of weightlessness and views of Earth from space. It is in the final stages of development, having already completed two crewed flights of its vehicle into space, and anticipate initial commercial launch in 2020