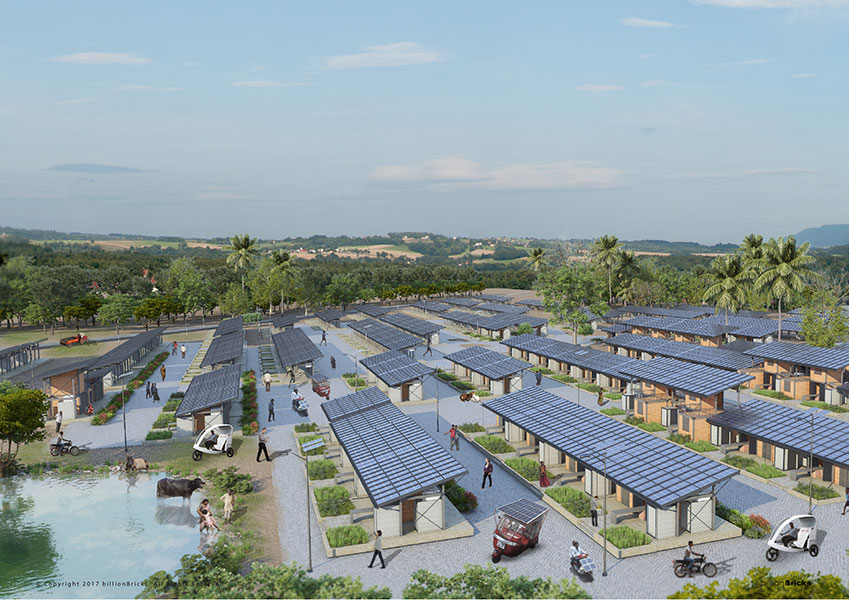 The idea was put forth by Singapore-based non-profit design studio billionbricks, and is the result of six months of research and development looking into ways to end homelessness. The team at billionbricks (which comprises CEO Prasoon Kumar, design director Robert Verrijt — partner at architecture brio — and Armand Paardekooper, founder of fUSE architecture) sought to create a system that allows homeless citizens in rural India be able to afford their own property, while contributing to an environmentally sustainable planet. For this reason, each powerHYDE dwelling is able to produce four times the amount of energy it needs for itself. It also collects 100% of its rainwater, cleans its own waste, and grows its own food.

PowerHYDE is the world’s first carbon positive home for the homeless. Designed for the 200 million rural homeless in India, powerHYDE ensures that when these are homes, they do not ad negatively to the environment and become a burden for other infrastructure provisions such as electricity, water and waste. Each powerHYDE produces four times the amount of energy it needs for itself, the additional energy is sold to power other communal facilities and generating additional income for the inhabitants. A cluster of 170 powerHYDE homes is a mini power plant generating 1 mega watt of energy.

‘PowerHYDE’ combines through one solution the enormous demand for housing (40 million rural homes in India), the increasing need of sustainable energy (300%) and sustainable financial model. The daunting numbers and lack of financing have paralysed construction of homes for the poor. We developed a house as a product that produces more energy than its own usage and generates its own income, and is easy to assemble and adaptable to different cultural, regional and climatic conditions.The powerHYDE is modular and the system of the house allows vertically and/or horizontally expansion to meet the demand of growing families. Passive and active sustainability measures have been combined to meet the needs of fossil free energy production and zero impact water re-use and circular waste treatment.