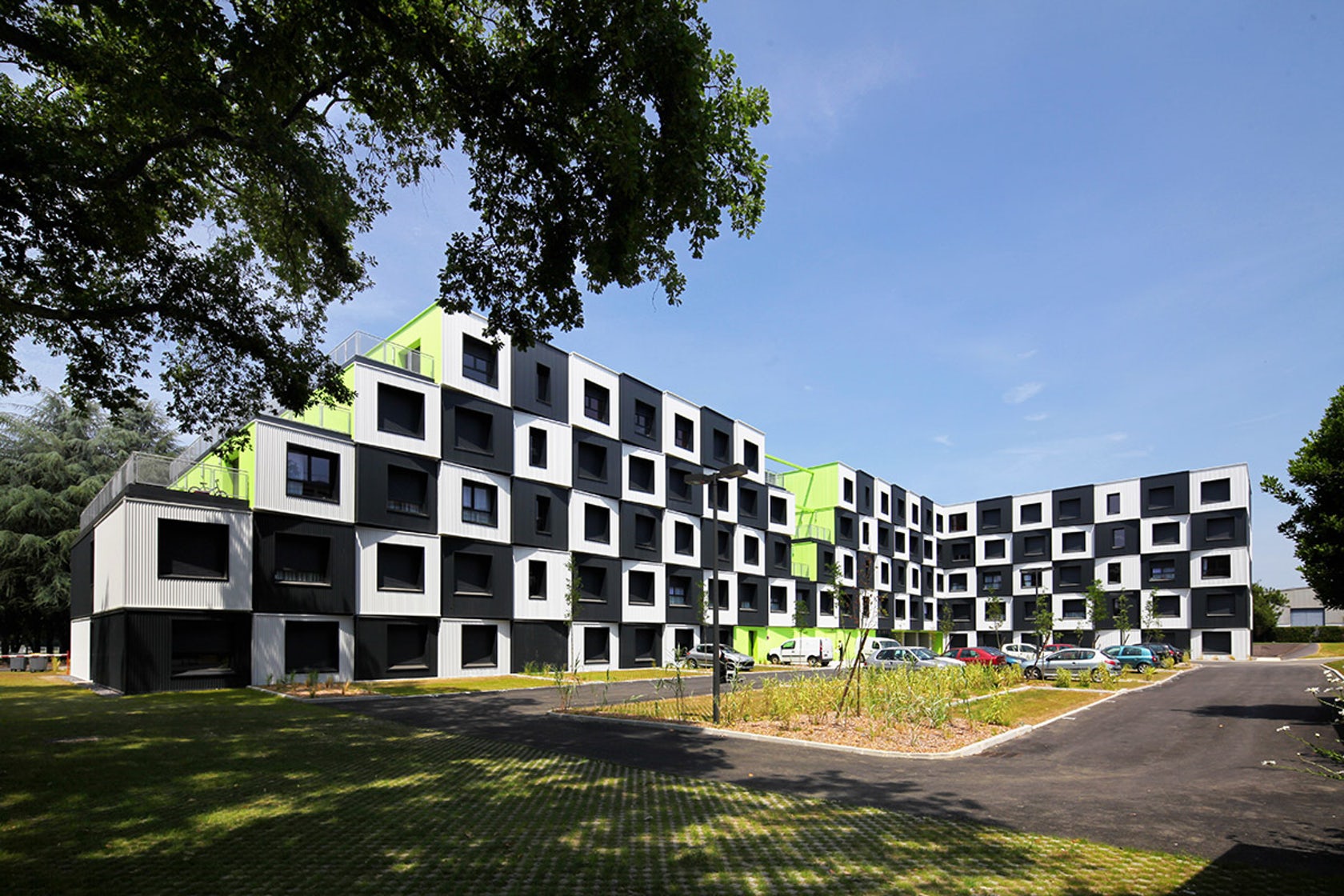 The Modular Checkerboard: A Student Housing Development in France by 2A Design

This 5 storey, 216 room, student housing development in Pau, a city in SouthWestern France, is a great case study with regard to density in housing design and alternative construction methodologies for housing schemes.

Designed by French architects, 2A Design, the development was built as a concrete modular system, with a large portion of the construction, prefabricated in an offsite factory. Transported to site by trucks, the developers were able to ‘install’ 12 modules a day, which invariably led to a faster building time and less impact on the neighbourhood. Below is a lengthy, google-translated description culled from their architizer page which was originally in French.

The site is characteristic of urban university systems, it is large landscaped spaces where buildings of different heights are sparsely distributed. . The site of our study is an islet bordering the rue Audrey Benghozi and the Avenue of the dean Robert Poplawski; Its organization is particularly well regulated, the buildings are bars aligned perpendicularly to Benghozi Street, the spaces resulting from this organization release “pockets” of car park surrounded by trees.

The building is integrated into the existing urban logic by building the building along Poplawski Avenue and parallel to the other buildings in order to benefit from more favorable orientations for housing. It stretches in the maximum possible length of the site.

The project stretches to the maximum of its possible grip, then creates a “raw” hard front hard enough, that is why, It seems essential to sculpt the building in order to break this apprehension and giving permeabilities on the scale of Pedestrians, as well as indentations marking a line of the irregular structure. With a modular concept of “adaptable” dimensions, it seems appropriate to play the lego by working the shape of the building to offer it a wide variety of spanning ranging from R + 1 to R + 4. Evidencing the building randomly allows us to work each face of the building in a different way breaking the monotony of the raw volume and offering a varied image according to each angle from which it is viewed.

The modules removed from the raw volume make it possible to release common terraces accessible from the circulations and to illuminate them naturally, breaking radically with the basic functioning of a bar. The project finds all its quality in its spaces of conviviality outside appreciable in the region.

The room’s functioning meets the client’s requirements, a room of about 16m², organized around a “piece of furniture” which combines the essential functions of the room (sleeping, eating, washing). It is for us to simplify the reading of this set by releasing the space on the ground for the students in order to offer them a maximum of quality of use.

The general image of the building then flows completely from the functioning of the building, the treatment of the façades will mark the common and technical spaces by a colored green siding reminiscent of the vegetal aspect of the site, while the facade dedicated to the rooms will be treated in a unique way . We wanted to set up a reinterpretation of the colors of the surrounding buildings, while bringing a contemporary image. The facade has a triple reading: the first perception is that of a checkerboard of facades in two shades of gray, the second plays of the shifts of facades created with the aid of decked and reversed siding frames with each change Level, while the last reading is that of a ribbed siding bringing a second finesse when approaching the facade. This treatment allows us to realize a general tapestry to the project where each module is identifiable. Above all, it allows by the combination of all these effects to break the built volume, while giving a reading changing according to the angle of the glance.

…as well as a time lapse from Compact Habit, the contractor behind the construction.

Next
An In depth Look Inside Moshe Safdie’s Iconic Habitat 67 in Canada by Andrew Cole.