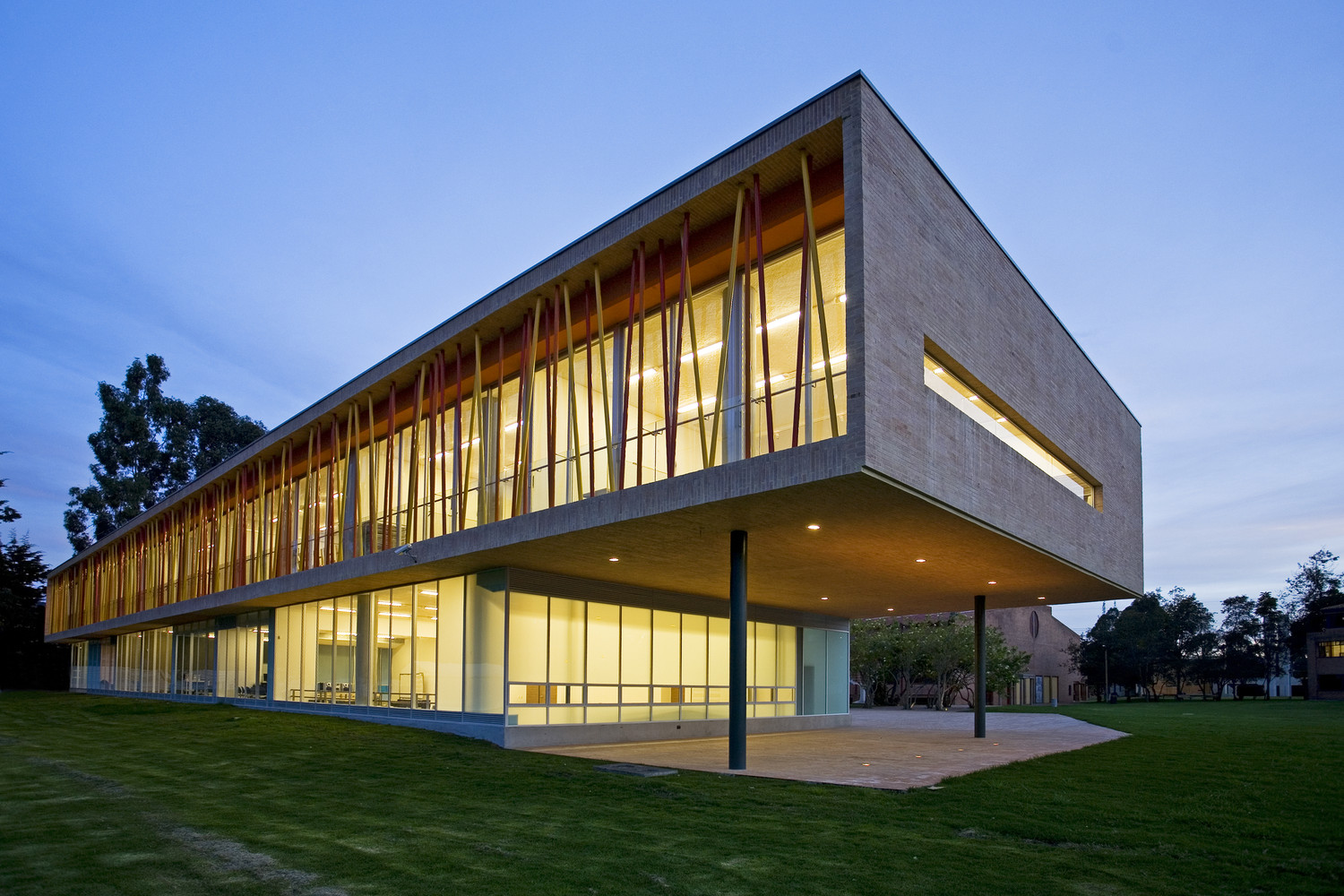 The Los Nogales school arts center building is a bold juxtaposition of rectilinear volumes enveloped by an interesting, colourful facade treatment. Designed by Daniel Bonilla Architects the arts center is one of the many structures on the school’s vast campus in Bogota, Colombia.

The building which covers over 1500 sqm features dance studios, music rooms, art rooms as well as extensive storage space to cater to materials and equipment. The Arts Centre is a building where arts and music are conceived as a pluralistic context; a meeting place, a destination and especially, an inspiring place. The project underwent numerous revisions and refinements of its content and curriculum, over several years, before arriving at its final design. The resultant building has an interesting dual relationship, where the first floor is used for music and dance, and the second floor for plastic arts. The two levels (and programmatic areas) are linked by a generous open-air (covered) grand staircase-hall-gallery that articulates itself simultaneously as a meeting, performance and exhibition space. The architectural objective of the Arts Centre was to develop a building that seamlessly integrates into the school campus (pattern and function ability), working the materiality that characterises the existing classroom buildings, with a more current aesthetic and spatiality.

In connection with the Campus and the existing Master Plan, the building is positioned as the seed of a second “quadrant” or central green space, to be accompanied (and completed) by future buildings. This generous new common area, or second quad, continues to celebrate the wonderful condition of the green college, with clusters of native trees and paths, defining a square that generates the buildings entrance.

Brick was chosen as the predominant material as the Arts Centre sought to integrate with the existing classroom buildings, with the Zapan wood of the central staircase and painted tubes (red, orange and yellow) of the upper façade completing the buildings external palette. The orchestra classrooms (which opens into a single performance space) required particular acoustical management; the entire space finished in wood – floor, walls and ceilings – with a percentage of sound absorption panels (also utilised in other music rooms). The white walls and generous sky lights of the Art rooms maximise natural light levels.

With the support of an interdisciplinary professional team, sustainability and comfort levels were implemented as key design elements. For example, in the music rooms, which were required to be sealed for acoustic reasons, an input system for natural air convection was developed (using an acoustic pipeline) injecting air through ceiling.

In detail, the building contains the following spaces: on the first floor, a dance studio, two music rooms, five test cubicles (one of which is a recording studio), and two artists studios (catering for a musician and a painter). In addition, each music room has a generous storage space, for instruments and props. The first floor also contains a lounge divisible to work with materials, and a performance hall for 200 people. On the second floor there are seven rooms for various artistic (physical) activities: including a pottery room (with an oven), a room for learning 3D industrial design, a room for engraving/painting room, two drafting rooms and a photographic room (featuring a darkroom), as well as music rooms. These spaces also have generous storage space to maintain order and care of the materials used/made and the classrooms themselves.

Next
Walkable Cities: How Barcelona is Using Superblocks To Create Pedestrian-Friendly Cities