Originally intended to Host a conference of the African Union, this year, I present the WORKAc designed L’Assemblée Radieuse.

As the winning entry for an international competition to design a new Assembly Hall, this building over-delivers. It incorporates dynamic geometry with Gabon’s ecology adhering to President Ali Bongo Ondimba’s vision of a Green Gabon. Its form and aesthetic seamlessly flow with its hillside surroundings within the cité de la démocratie, (the new diplomatic quarter that surrounds the site) complimenting one another as though they were formed together. 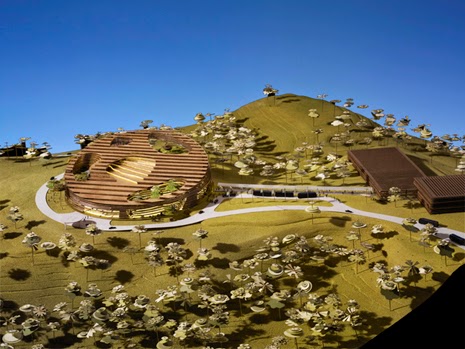 WorkAc have created an architectural Landmark within Gabon’s capital city that truly does symbolise the optimism of the nation and their desire to be seen as a leader in Africa. In the words of WorkAc’s Principal, Dan Wood, “We felt that it was important to emphasize not only the President’s commitment to preservation, sustainability and ecology but also to acknowledge that this larger conception of the role of “natural resources” is a critically important part of Gabon’s identity. We also feel that this is a model that can be adopted across the continent, as stewardship of the environment continues to become as important as exploiting it for economic gain.”
To this end the Building seeks to harness the best in active and passive sustainable design with a self shading perforated circular structure that looks as though life is growing through it. The design offers a vast array of conference, assembly and dining facilities that all sit around three carved, somewhat oval courtyards, each said to represent Gabon’s rich and diverse ecology with native plant species. The courtyards are lined with African limestone louvers that allow ventilation into the structure having similar louvers wrapping around the building exterior.
A Flexible, elliptical 1000-seat central auditorium forms the core of the building. It is designed to divide easily into two separate spaces, via removable partitions, with each subdivided space retaining optimal sightlines and state-of-the-art acoustics regardless of its required configuration. The building also features a triple-height banquet hall as well as a number of smaller auditoriums and meeting rooms. Atop these elegant spaces is a sloping, light-colored, equally elliptical roof that helps to deflect heat in the summer and collects rainwater in the wet season, re-circulating it through a waterfall before being re-used within the facility. This roof also forms one of the building’s most prominent façades, which allows views up from the city below to the courtyard gardens.

Moving around all the elegant curved spaces is made possible via semi-enclosed, shaded “philosopher’s paths” which link the garden courtyards. This fluid and interconnected promenade offers flexible and informal spaces for walking, thinking and meeting while taking in striking views of the surrounding hillside as well as the landscape and sea beyond. 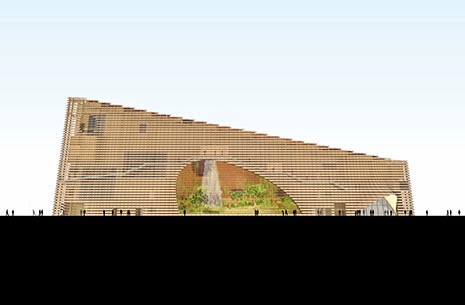 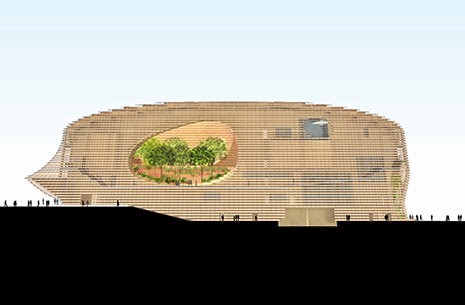 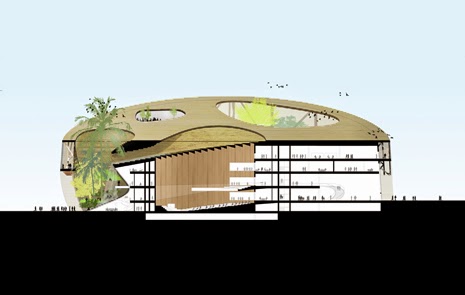 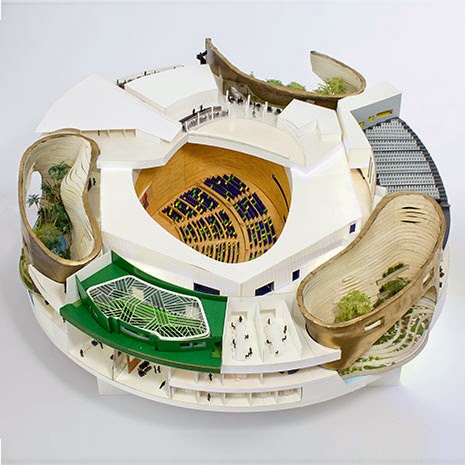 In the development of this masterpiece (in my opinion) WORKac was also heavily influenced by Libreville’s vibrant history of modernism, drawing inspiration from the work of Marcello D’Olivo, an Italian architect and one of the earliest proponents of “ecological urbanism”. He was responsible for Libreville’s master plan as well as the design of many iconic structures, one of which is the spiral sculpture at the Place de la Paix.

“We wanted to tap into that incredible spirit of post-colonial optimism of the 1960′s and 1970′s which resulted in a unique take on modernism – one that acknowledged the climate (many incredible examples of bris-solei’s informed our design of the stone louvers, for example) and presented a progressive, forward–looking vision of Africa, without resorting to historicism or cliches about traditional Gabonese building forms that perhaps have little to do with the requirements and vision of the institutions of the contemporary city.”

As described by the architect, heres a summary of some of the key features and themes included in the design: 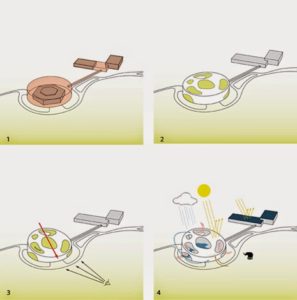 Preservation and Sustainability:
The site’s former structures were strategically wrapped to conserve resources and impart a sense of historic continuity.

Visibility:
The iconic sloped roof of L’Assemblée Radieuse is oriented toward the city so it can be seen all the way from the heart of Libreville; its circular form signifies the cycle of life and the environment and projects Gabon’s ecological consciousness to the world at large. 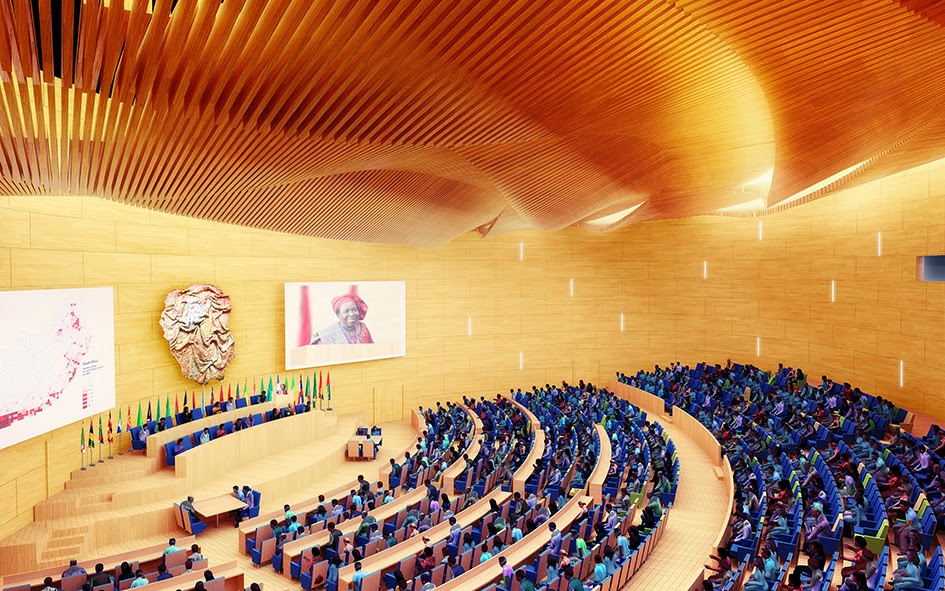 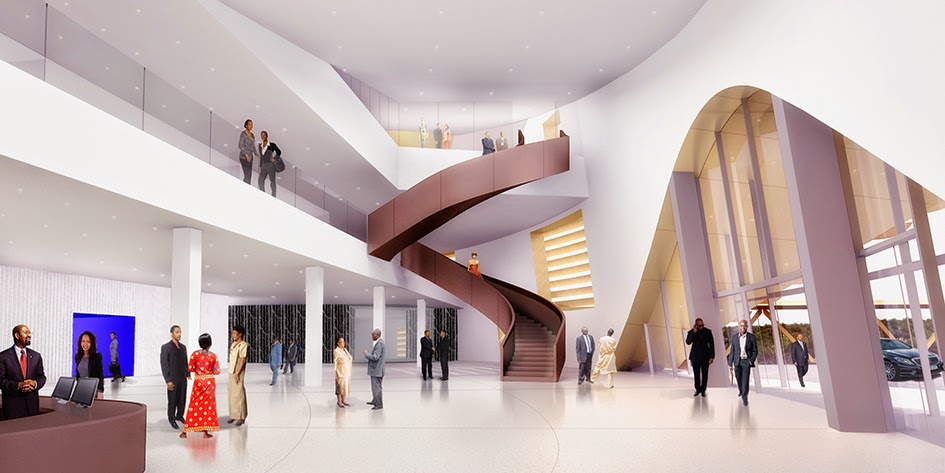 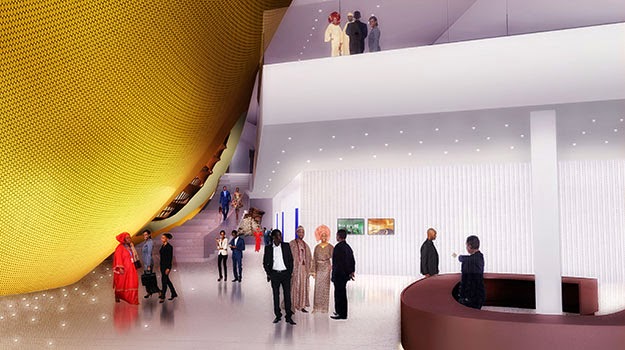 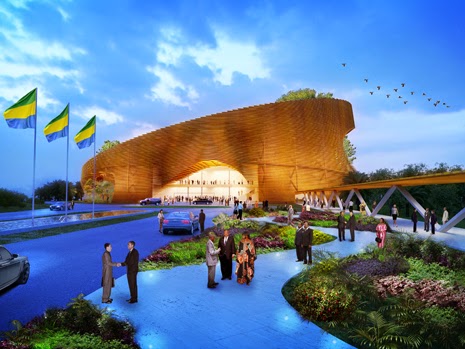 I can’t call this impressive, because I’ll be doing the designers a disservice. I’ll rather say that this is and will be one of the many iconic landmarks that will define the future of both Gabon as well as the African Urban Landscape, much like the Eiffel Tower does France, or the Burj does Dubai. Its symbolic, and this seldom happens, its not commonplace, this to me is History in the making.  With Construction having begun I look forward to something just as great as what the rendering depict. Kudos Workac and Well done Gabon.