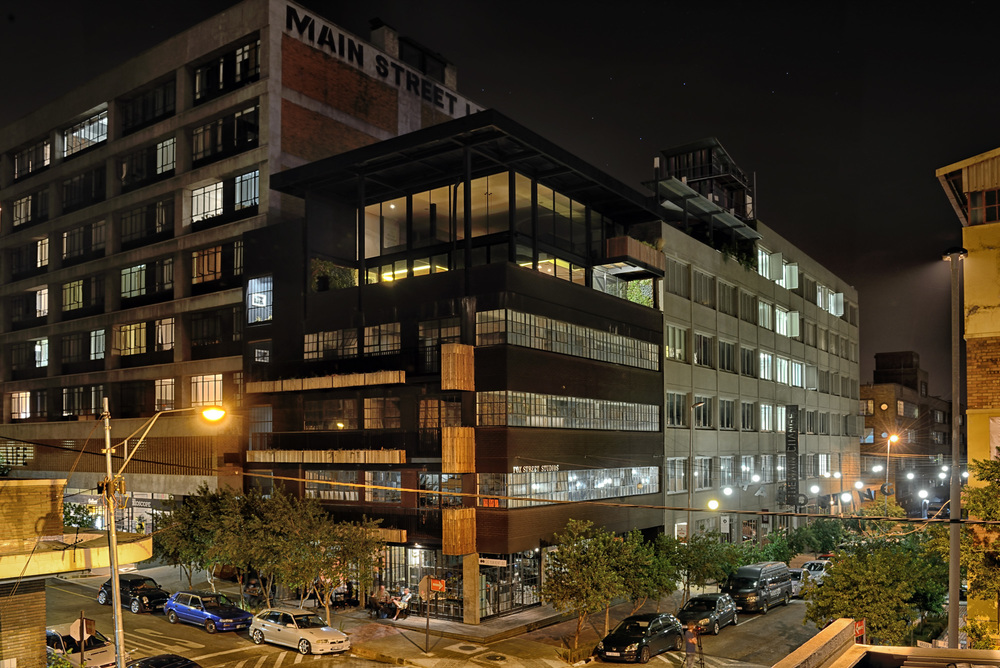 Fox Street Studios by Daffonchio Architects is an Urban Regeneration Project which repurposes an old factory building into a mixed-use development, with restaurants and retail on the ground floor, and residential / studio units above.

The building which was initially a 3 level factory with a basement, is situated on the corner of Fox Street in Johannesburg’s burgeoning Maboneng precinct, an urban area situated on the Eastern side of the central business district. The idea to repurpose the building was a collaborative effort between property developer Jonathan Liebmann of Propertuity (the company behind DriveLine Studios, also in Maboneng) and Daffonchio Architects.

The word Maboneng means “place of light” in Sotho. Maboneng originated in 2009, when Mr. Liebmann bought a cluster of warehouses in a run-down city block bordered by Main Street, Fox Street, and Berea Street. Liebmann named the development “Arts on Main” and filled the space with galleries and prominent artist studios. His company, Propertuity, then bought more buildings in the area and named the new district Maboneng.

Drivelines Studios in Maboneng, Johannesburg by Lo-Tek is Built Entirely From Shipping Containers

The architects started by exploring the history and original plans of the buildings in Maboneng before venturing into the design process, and it was during this deep dive into the past of the precinct, that they realized that there was a house on that very corner 100 years before. This birthed the idea of a black building interspaced with glass and a plenitude of plants; an anomaly in the C.B.D. at the time.

“So, the concept was in essence, to put back the original house that was on the corner on top of the factory building.”

On the ground floor, timber decks have been built in front of the restaurants and shops, allowing the retail to spill out onto the pavement. Each existing floor above the ground level is dedicated to a single unit, with balconies added along the northern length and timber planter boxes acting as the balustrades, with the plants inside screening the balconies for privacy. The timber provides a soft, natural contrast to the industrial black facade.

A new 2 level penthouse was constructed on top of the existing building. The external skin of the penthouse is entirely double glazing with black aluminium frames, while the interior structure features black steel with very few internal dividing walls. This gives the exterior a light, transparent, industrial aesthetic, whilst maximising the views over the city to the north and west, and making the internal spaces light and open. The glass facades are set back, allowing for a wrap-around balcony on the lower level on the northern and western sides, a balcony off the bedroom on the top level, and deep overhangs to shade the glazing.

It was a challenge to build the steel and glass penthouse on top of the existing building, as such a specialized crane was deployed to transfer the steel sections to the upper levels. This allowed for relatively easy assembly on-site. The design also introduced some vertical gardens, a profusion of greenery, which in turn brought its own series of challenges, as when building with planters, one has to consider the irrigation systems required for the façade and ensure that these wouldn’t create a downpour onto passers-by below or the ground-level restaurant patrons.

The interior design of the penthouse picks up on the modern, industrial aesthetic by means of a monochromatic palette and the use of steel and copper, whilst introducing warmth with the bamboo floor. The living area in the north-western corner is a dramatic double volume space, with a steel spiral staircase leading to the study and bedroom suite on the first floor. The design of the penthouse proves that urban living can be sophisticated and comfortable, like living in a contemporary villa in the sky.

Next
Inside South Villa, a Five Storey Luxury Penthouse by ARRCC in the Award Winning Clifton Terraces Development