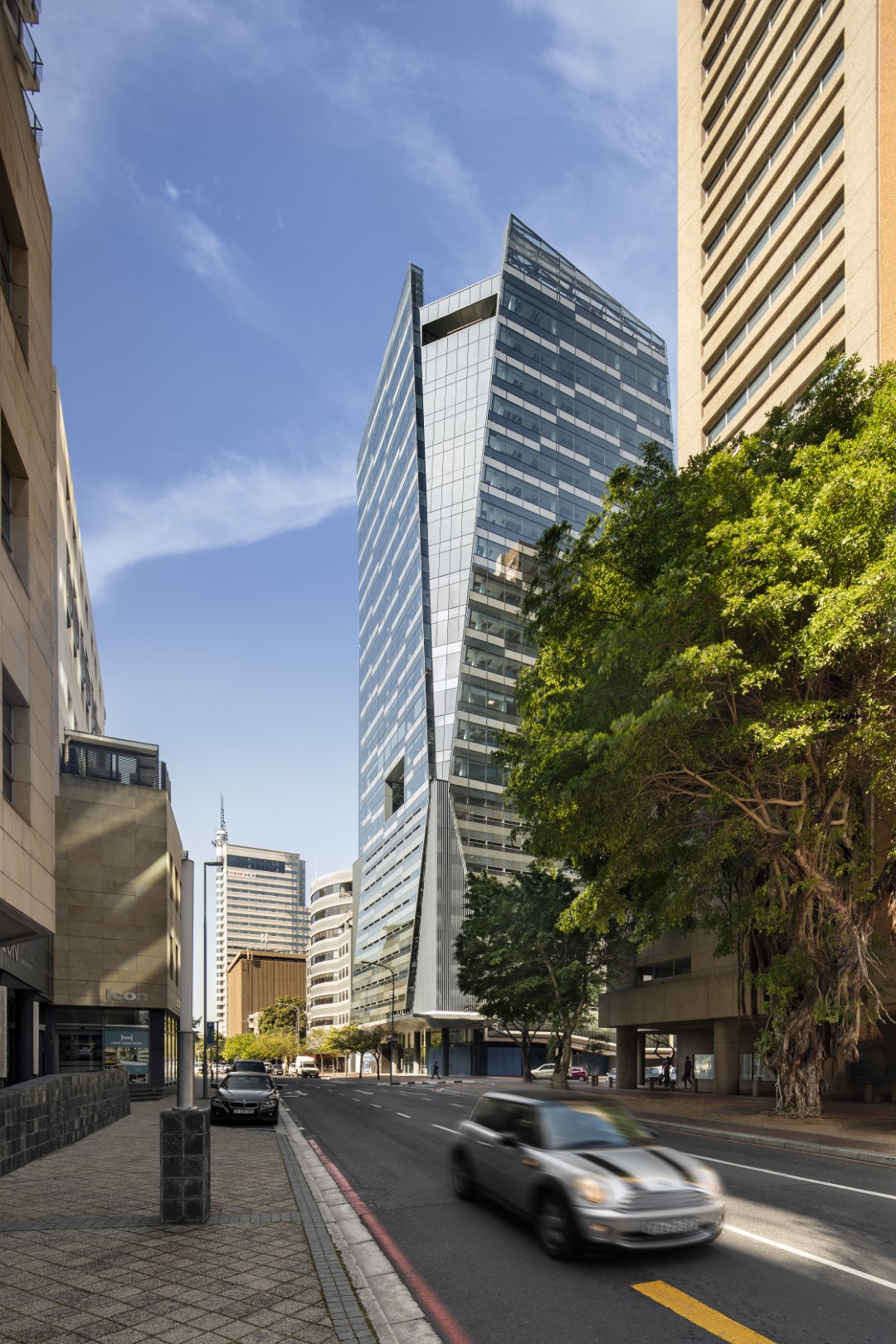 dhk Architects designed the glass tower while Abland Property developed the building. Its character is a singular sculpted mass that transforms via dynamic glazed planes. The mass further extends over the office and parking levels. The two main corners of the building are chamfered towards the roofline and soar upwards. This forms a striking wing-like effect – resulting in a distinctive, non-orthogonal addition to Cape Town’s skyline.

The site is in Roggebaai (Cape Town’s growing financial and hospitality precinct). It earlier housed an eight-storey 1980s office building. Prior to that, it was part of the now-demolished Long Street Power Station site. The peninsula site has 3 Street frontages. It causes high levels of pedestrian traffic in public domains, which suffered from limited street activation. This was compounded by the last remaining portion of the demolished power station (S ite B). It hostile frontages of both the 80-metre office building to the south and the dilapidated office building to the east.

A fundamental component of the design involved the activation of the street edge with retail. This improves the quality and safety of the public realm. It also takes advantage of the high levels of pedestrian traffic passing the glass tower.

The initial brief was to remodel and extend the existing 1980s building. It was discarded because of an impractical core design. The core limited addition of floors, replacement of an outdated façade and long-term viability. The revised brief, by the co-owners Ellerine Bros and Abland, offered a more positive medium to long-term viability. It also enhanced Cape Town’s skyline with a taller, inspirational tower.

However, the challenge was to maximise the quality of multi-tenant commercial space while accommodating the core components. These include the lifts and stairs with a basement parking – all within a small floor plate.

To maximise the floor plates, dhk proposed a simple singular orthogonal massing bar. This mass articulates the southeastern and southwestern corners. With a solid building mass, a dynamic, non-orthogonal sculpted mass was created. This fostered via tapering or cranked façade planes the extension of the mass. That part extends above the office and parking levels. They achieved this by chamfering both the southeast and southwest corners of the building. First at the top of the orthogonal parking base and widening them towards the roof.

The technique articulates the façade and defragments the solidity of the corners of the glass tower. The wings shape the elevations and extend past the top office floor. By extending the wing-shaped façade screens beyond the roof level, it created the appearance of soaring shards as opposed to an abrupt utilitarian termination.

In terms of materiality, a glazed façade was selected due to its flush and sculpted reflective form. It conceals both the parking levels and solid spandrels. Not only does glass facilitate an exciting play of light, but it also allows for expression on the screen and shard-like elements. Introducing pixilation on the portions fronting the parking levels, ceiling voids and structure allows the building to conceal both the parking levels. It also avoids overbearing horizontal bands.

The entire length of the street frontage along Lower Long Street and Jetty Street enlivens new ground-floor retail. These have multiple entry points into the office building. At street level, a double-volume entrance connects to shuttle lifts at all parking levels. It also connects the ground floor to a spectacular arrival experience within the 10th-floor sky lobby.

Thereafter, individuals move via a double-volume area and terrace to the office lifts. These connect to all the floors above. This ensures mid-building activation. An experience for all users to enjoy as part of the arrival journey into the workspaces. It encourages interaction between different tenants.

Internally, the glass tower offers expansive 360-degree views over the city, ocean, and mountains. The glazed façade allows for floor-to-ceiling unencumbered vistas. Its mullions at 2.4-metre-wide centres enhance the experience. The chamfered corners also offer oblique views. These facilitate the appreciation of the architectural form, both externally and internally. A desirable design aspect often not apparent in tall buildings.

The multi-purpose roof area has terraces above both chamfered corners. They offer a spectacular city entertainment space and signifies high-level activation. From an external viewpoint, the perimeter desk height upstands provide ease of furnishing. It is right against the perimeter with fire separation between the floors. Therefore, an external view of the building conceals the office furniture.

The immediate neighbour to the north and sharing a common boundary is a nine-storey 1980s building. It also has the potential for redevelopment in the future. Rather than merely providing a blank common boundary façade, dhk articulated both northern corners. It returns the glazing around onto the common boundary.

This is sacrificial in the sense that the neighbour could in future build higher against the common boundary. It also offers spectacular corner northern views of Cape Town’s harbour. The solid wall concealing the stair core is pixelated with coloured plastered panels. These echo the glazed façade’s articulation of the glass tower.

To reduce both solar gain and radiant heat, which lowered HVAC requirements. Other environmental considerations included building efficiency, choice of materials, energy-efficient lighting and services. The lower parking ratio encourages the use of public transport. It also encourages showers and bicycle parking facilities around the glass tower.

Overall, 35 Lower Long is a much-needed contemporary addition to Cape Town’s skyline. It positively contributes to its surrounding cityscape. Pierre Swanepoel, dhk partner and lead architect on the project, says “With its sleek, sculpted form and soaring-shaped facade, 35 Lower Long is an exemplar of how to meet client requirements without comprising on design standards. dhk is extremely proud of this glass tower. It also views it as a catalyst for future developments to come in Cape Town’s CBD”.