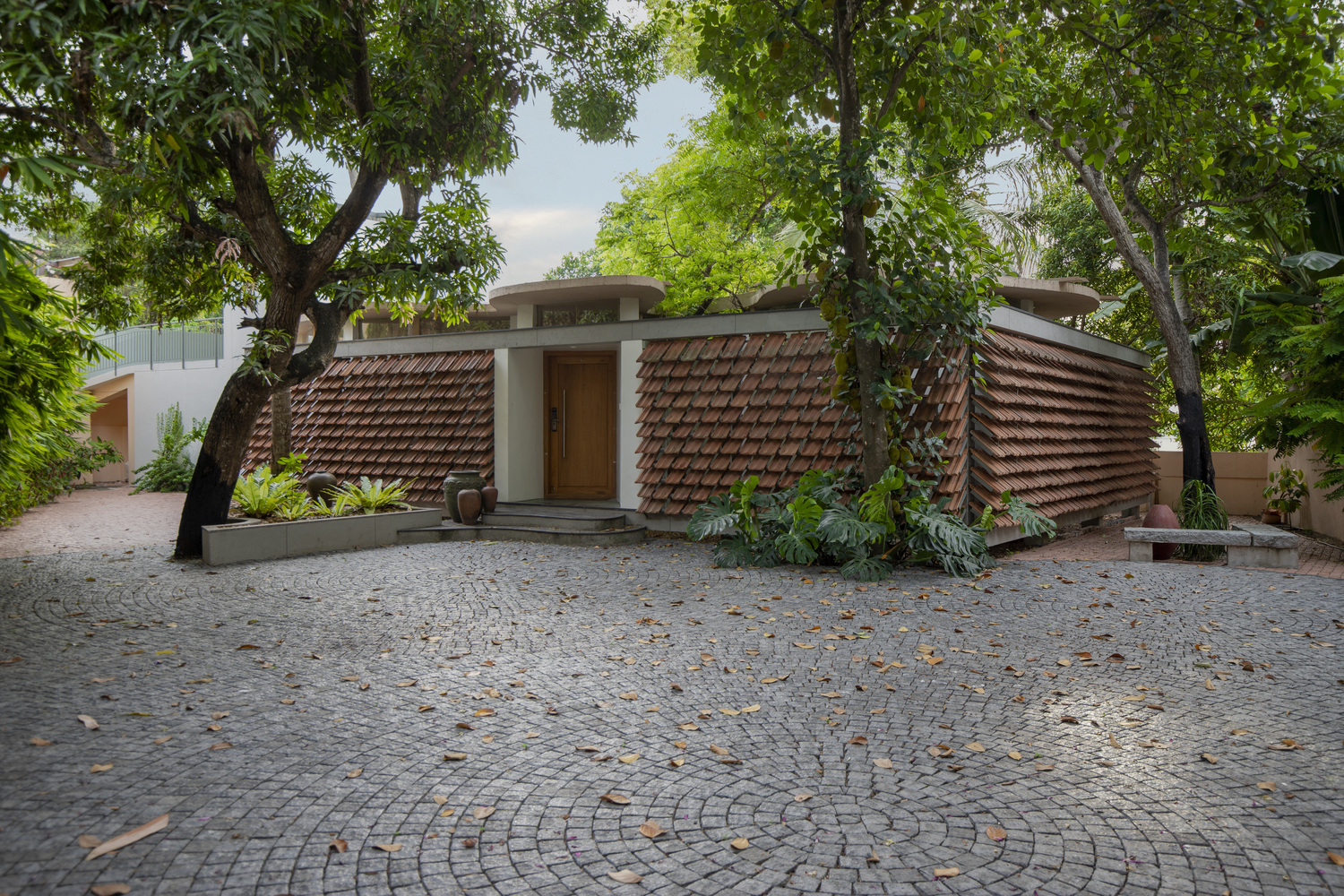 The project is a weekend home on the Ashtamudi Lake in the tropics. It is a sustainable house with a minimal footprint, that upcycles various spaces, components, and materials from a dilapidated structure, that existed on the site. The design retains traces of the existing house while adding new spatial volumes, satisfying the functional requirements of the users.

The site is located on the intermittent level of a terraced hill, sloping towards the lake shore, with access on the lower level. The site had several tropical trees, which were retained and made part of the new intervention.

According to Derrida, our thinking straddles binary oppositions in language, which often leads to unjustified and unhelpful, privileging of one thing, over the other with regard, to these extremities. Privileging involves a failure to see the merits and values of the supposedly lesser part of the equation. Often times the crux of the matter lies in the `in between’, termed as the zone of Différance, rather than the limits. Architecture as with any other art is torn between binary terms, which often leads to privileging. In this house, we are trying to create a permanently oscillating typology of spaces, without privileging one over the other.

Built over nature. Grid over Fluid. Interior over the exterior. Light over darkness. Rustic over Sublime. Conservation over Creation. Sky over Earth.

This house uses extremities of spatial vocabulary while leaving pockets of différance to mediate the meaning of the architecture. We believe that the society is transitioning from the extremities of the binary opposites, like east and west, capitalist and communist, man and woman, etc. to a more mature narration of the in ‘betweens’, and our architecture represent this cultural transition and re-reading of the existing structures of society. After careful demolition and refurbishment of the selected areas, the structural grid was extended, and new walls were added along curved lines, saving the positions of existing trees. This resulted in fluid spaces that merge with the neighboring volumes and nature.  The newly introduced curved walls are riddled with punctures, opening into the pockets of Différance. The secondary facade that defines the architecture is perforated to `supplement’ these pockets.

A car porch is given at the first-floor level, connected by a ramp opening up to the road, on the rear side, resulting in an additional entry to the new house. The freely flowing curved volumes are connected by a floating roof, that rests on a layer of clerestory windows, supported by I-sections. The common spaces like living, dining, and the kitchen are placed along with the curved spaces, opening up to a deck, with views of the backwaters. One circular bedroom is placed along these curves, with an additional deck, along the water’s edge. The other bedroom follows a rectangular geometry, based on the footprint of the retained walls.

The exterior reflects the rustic rawness of the tropics, allowing the built spaces to be camouflaged amongst the flora. Strategically placed pockets of greenery, enhance the tropical vibe. Sturdy tropical plants were selected based on the form and textures of foliage, also ensuring minimum maintenance, for the landscape, as it is a weekend home. During the summers, the tropical fruit trees produce different varieties of mangoes, jackfruit, rose apple, and many other berries, creating a food forest, and inviting birds and squirrels to this home.

Global warming is real and it affects everything on the planet. A climate-conscious living is essential for mitigating the ill effects of climate change. This house with a small footprint of 123.67 Sqm is an attempt, to reduce the carbon footprint, wastage of materials, and overuse of energy for sustenance. It also aims to create permeable built spaces, through a careful understanding of the local winds, orientation, and topography. Materiality and breathability of built volumes are considered as two separate entities, and dealt with accordingly, with respect to sustainability.

Cross Ventilation which is required for a comfortable microclimate, was minimal due to the contoured profile of the site. The stairwell is strategically placed, to attain breathability, and acts as a ventilation shaft, which collects the hot air from the interiors and emits it through a lift system, when the wind blows from the lakeside. It inverses its role as a wind scoop, when the cool winds blow down the slope, during the retreating monsoon, creating comfortable living conditions, during all seasons. The roofing tiles for the façade were collected from the dilapidated structure and reused.

Crushed concrete chips from the demolished slabs were used in the columns of the outer façade to reduce material wastage. The polishing of the base layer for flooring helped in avoiding the use of tiles or natural stone.  The horizontal members for the stairs were salvaged from the staircase of the old structure, and the frames for the car porch were upcycled from a local scrap dealer. This experimental house has widened our understanding of residential typologies, to include a multitude of possibilities, often questioning the existing, and being in a constant state of Aporia.