The Casa Port railway station, designed by AREP in collaboration with Groupe 3 architects is described as a dynamic transport hub that anticipates the needs of the city of the future.

Located in the city of Casablanca, Morocco, the station, which is designed to anticipate 25 million passenger trips annually in the future, features a large passenger hall which serves as a central node from where users can access a shopping center, underground parking and ofcourse the boarding platforms for the trains. This vast complex is housed underneath a single, fairly large hypostyle roof made of wood and steel which provides much needed shade in tandem with a facade of contemporary mashrabiya. 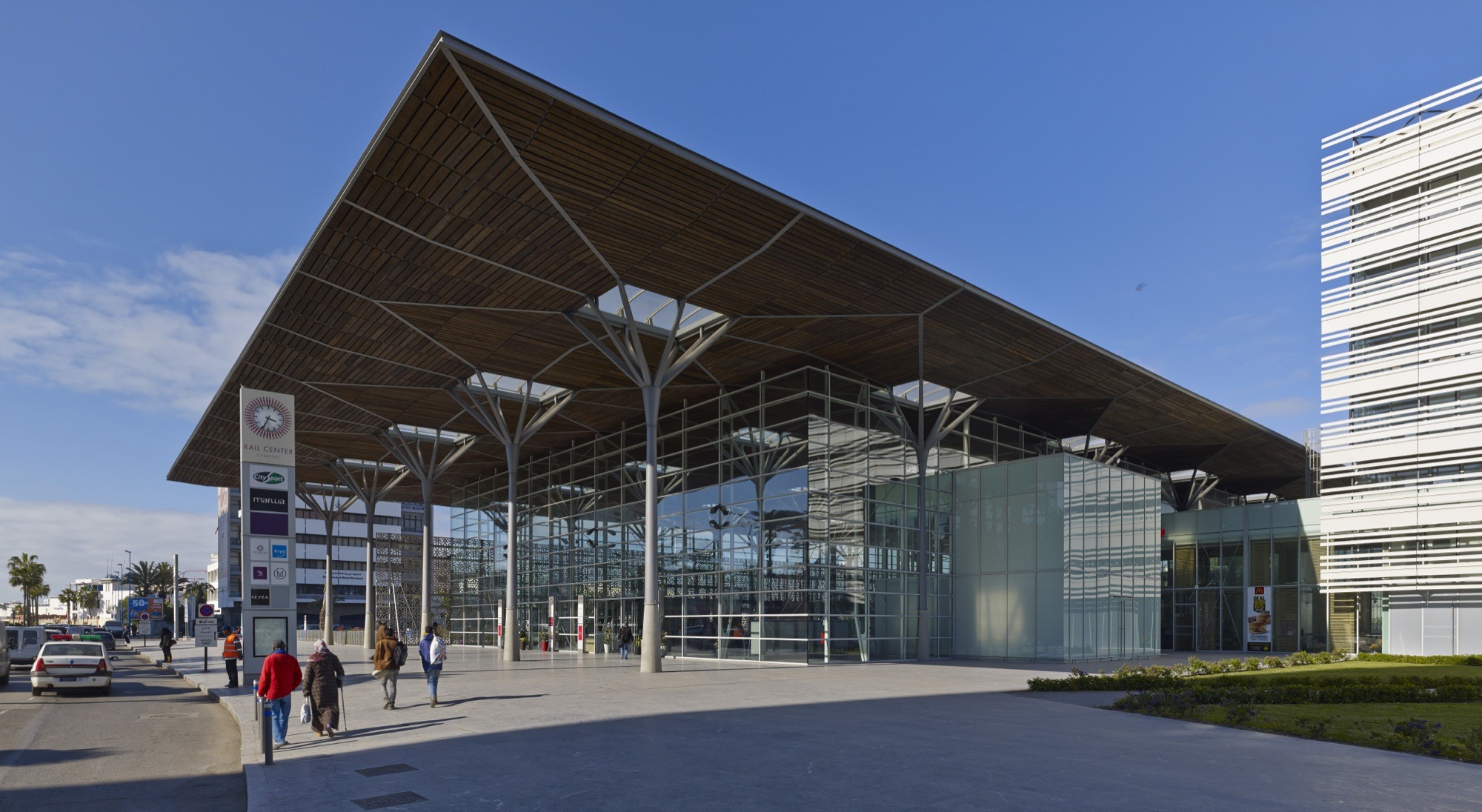 Facing the port of Casablanca, the economic capital of the country, the railway station is located at the meeting point between the medina, the art deco district and the new developments in the city centre. The station needed to be rebuilt in anticipation of the increase in passenger numbers in the future, where 25 million travellers are expected to use the station every year. The general design of the station and of the adjacent public spaces reflects broader considerations regarding the urban remodelling of the waterfront and the districts in the vicinity of the port of Casablanca.

Under its large roof, the transport hub houses waiting areas, circulations, services as well as retail outlets and a two-tier underground car park facility. The concourse is the major element of the hub and opens up onto a large forecourt on the south-west and the platforms on the north-east. As if in anticipation of possible new transformations, the station has been devised in a way that allows its future connection with a potential regional express line station.

The dimensions of the vast concourse and the walkways leading to the transverse platform are suited to deal with, mainly, commuter travels and peak time loadings occurring over the same periods during the day. The concourse hosts all travel-related services (ticket offices, information displays, reception, waiting areas etc.) as well as a prayer room away from the bustling crowd. Vertical circulations pass through a central floor opening and link the main concourse with the lower level, which completes the retail offer of the ground level (fast-food restaurants, kiosks, vending machines and ATMs) by providing food court areas and some retail outlets. The underground car park is located below this level and has a capacity of 380 places.

A wooden and steel roof obeying a rigorous geometry, tops the “hypostyle” concourse. It is supported by thin columns, the upper part of which splits into eight branches to filter sunlight through the skylight. Its floor-to-ceiling glass facades ensure continuity between indoor and outdoor public spaces while allowing passengers to grasp the general layout of the station and, thus, anticipate their movements. On the west facade of the building, the modern mashrabiya acts like a screen between the city and the station to reduce direct sunlight in the afternoon. On the south facade, the roof covers the vast outdoor public spaces. By its spaces, volumes, materials, lighting and geometry, the station carries on the heritage of Moroccan palaces and public buildings while paying tribute to the modernity of Casablanca. 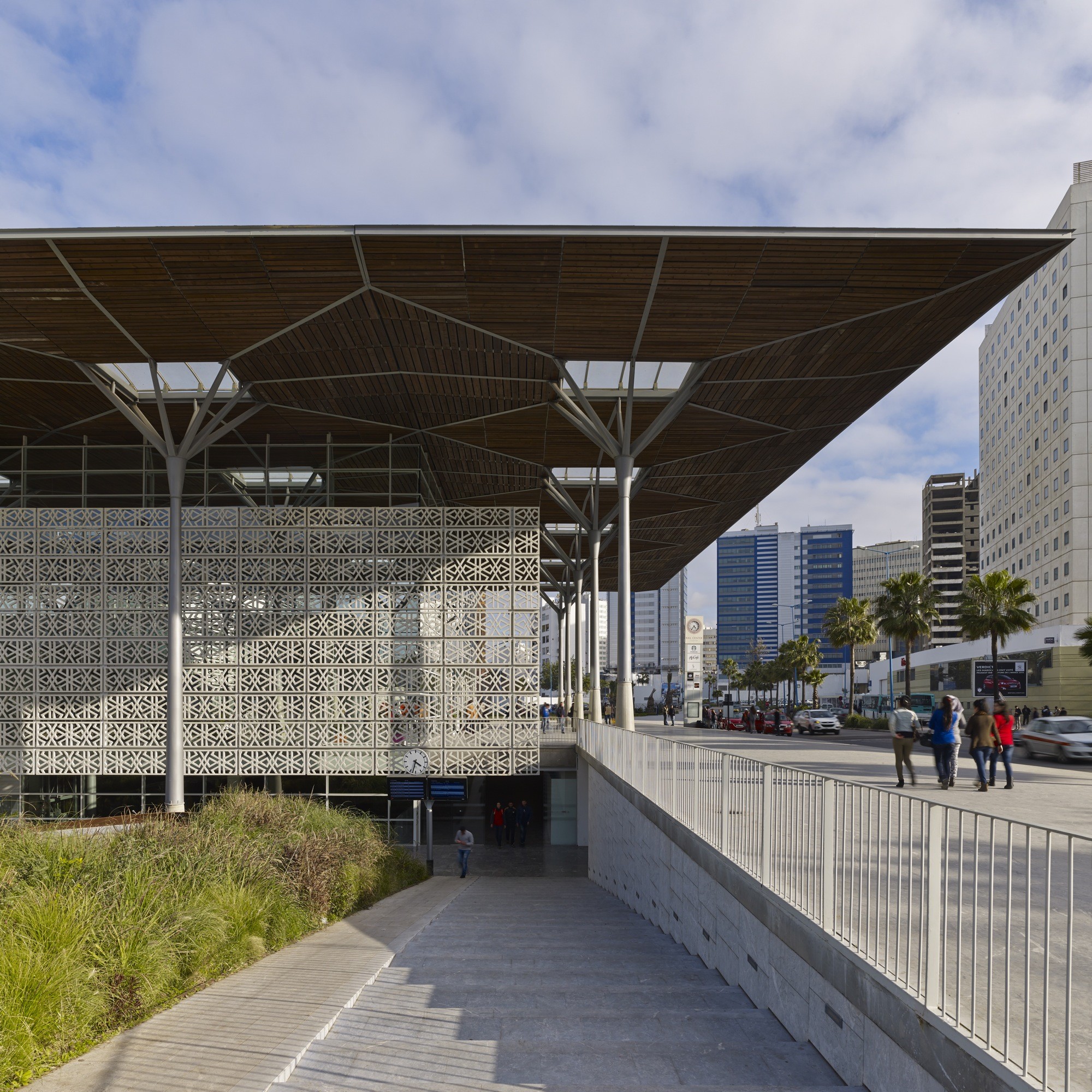 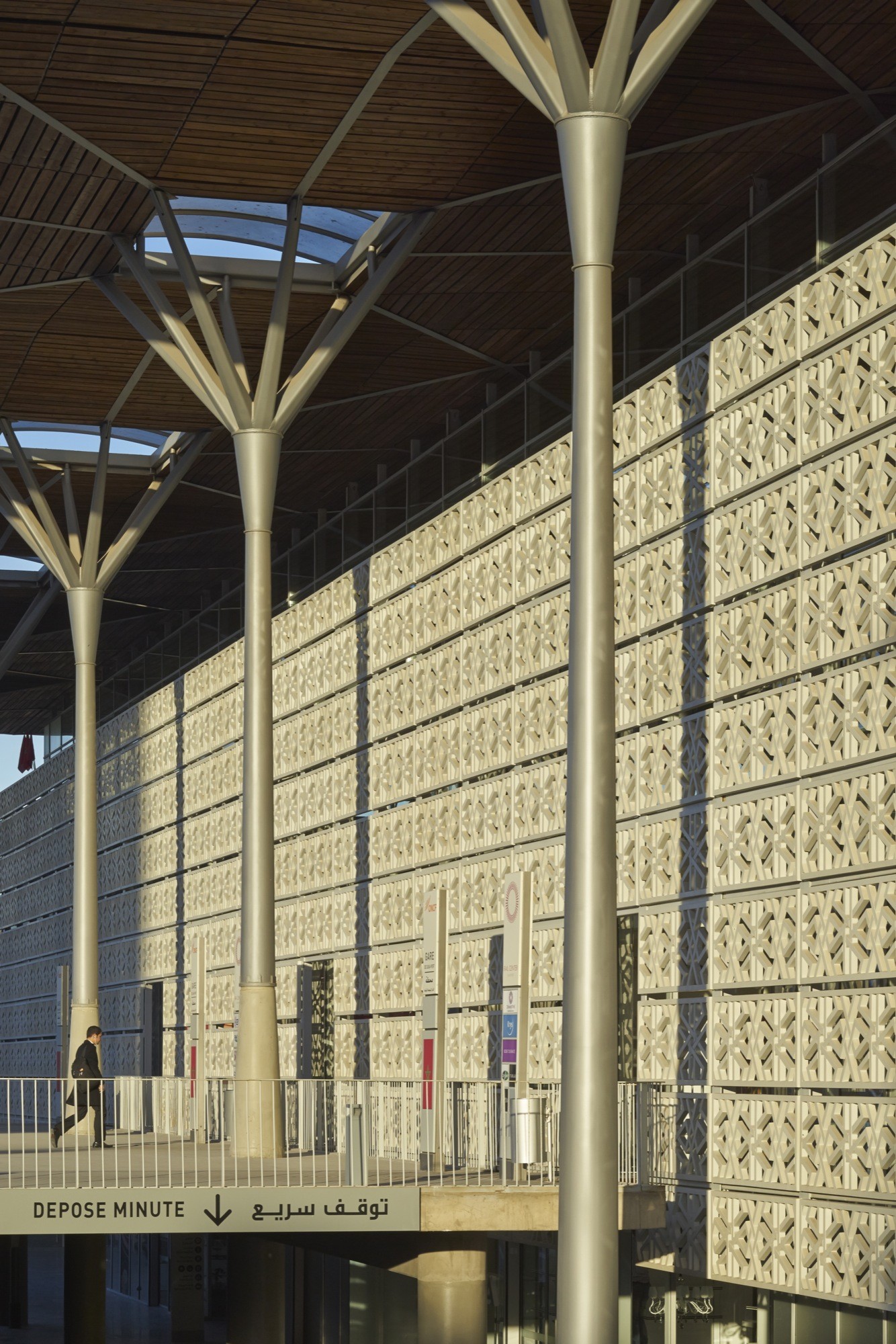 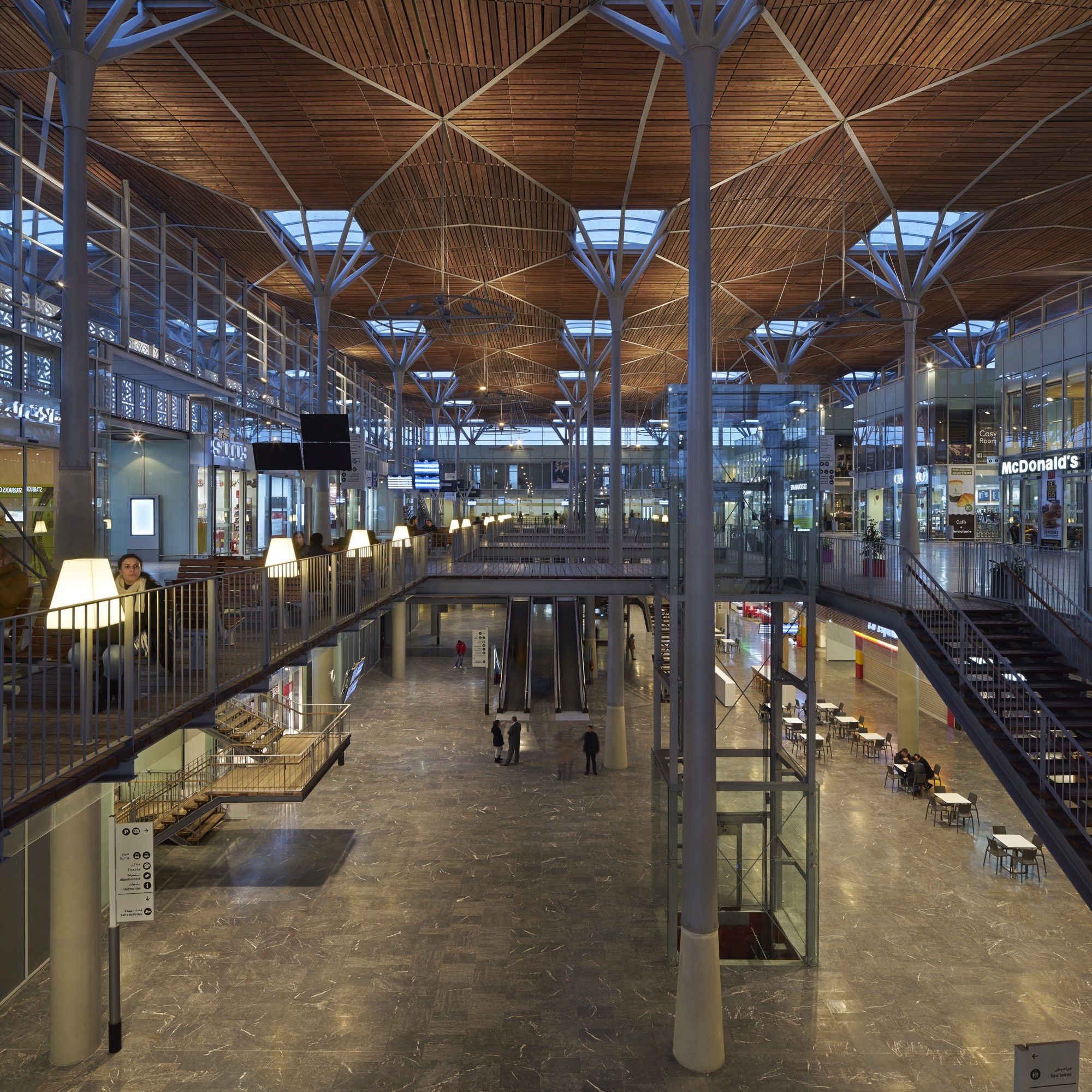 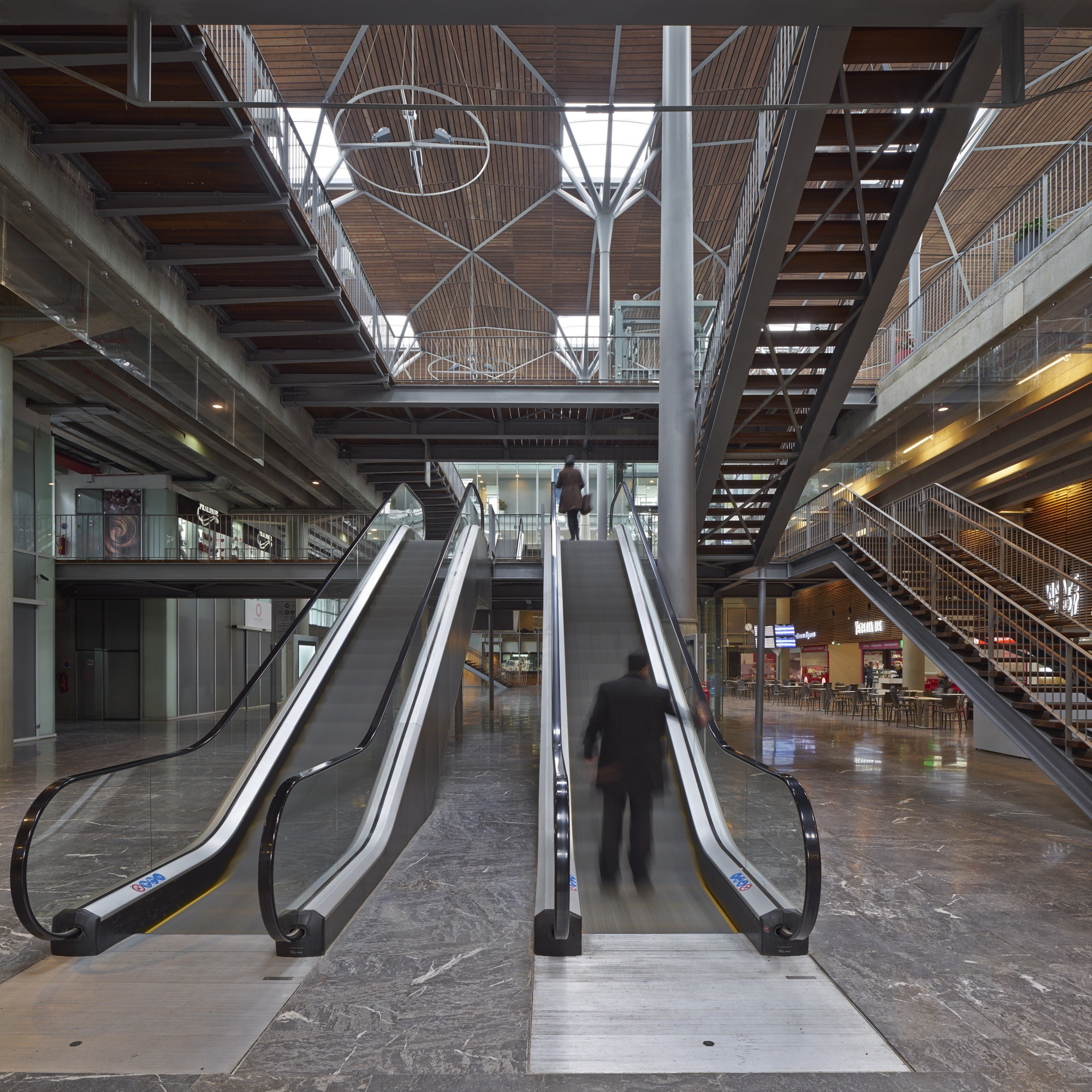 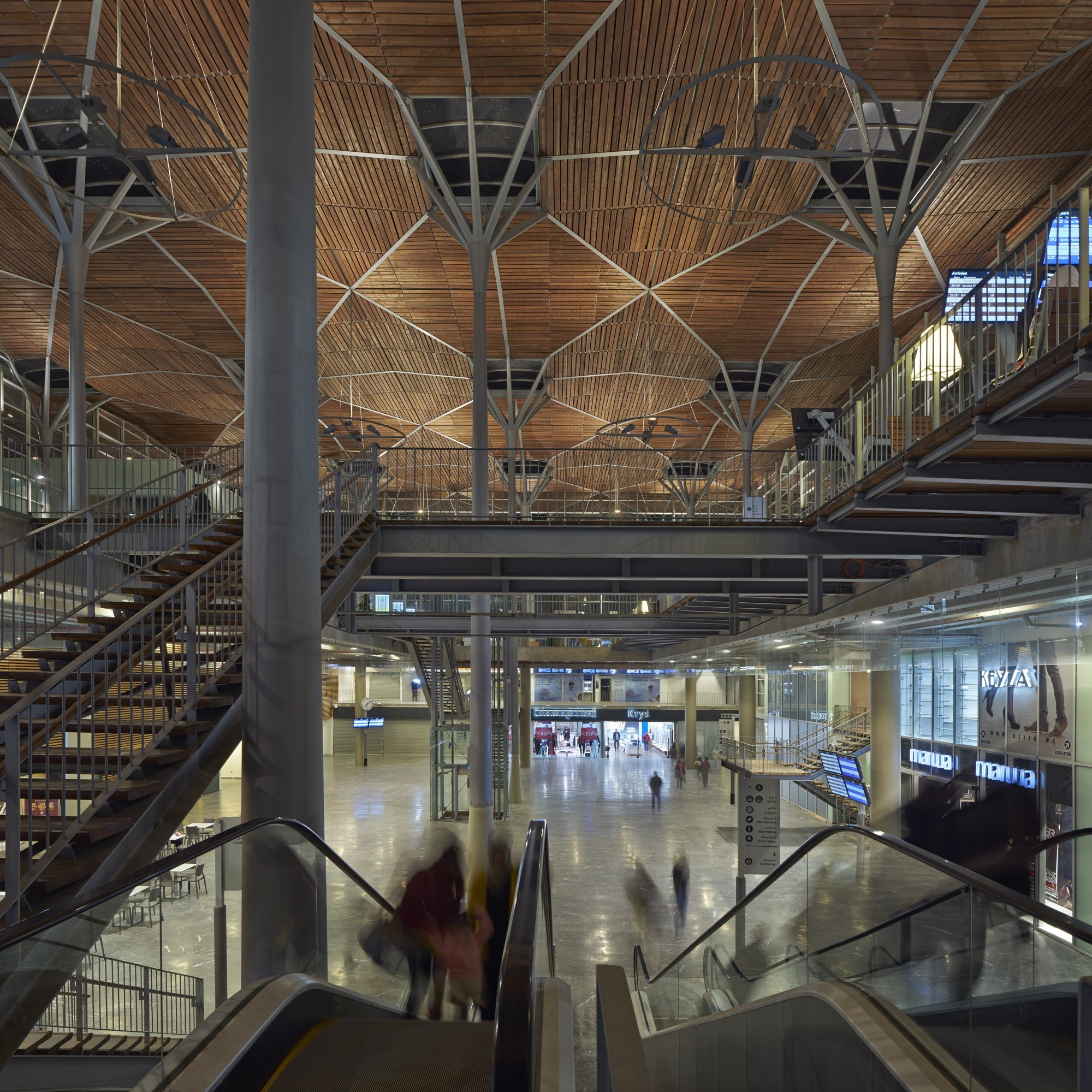 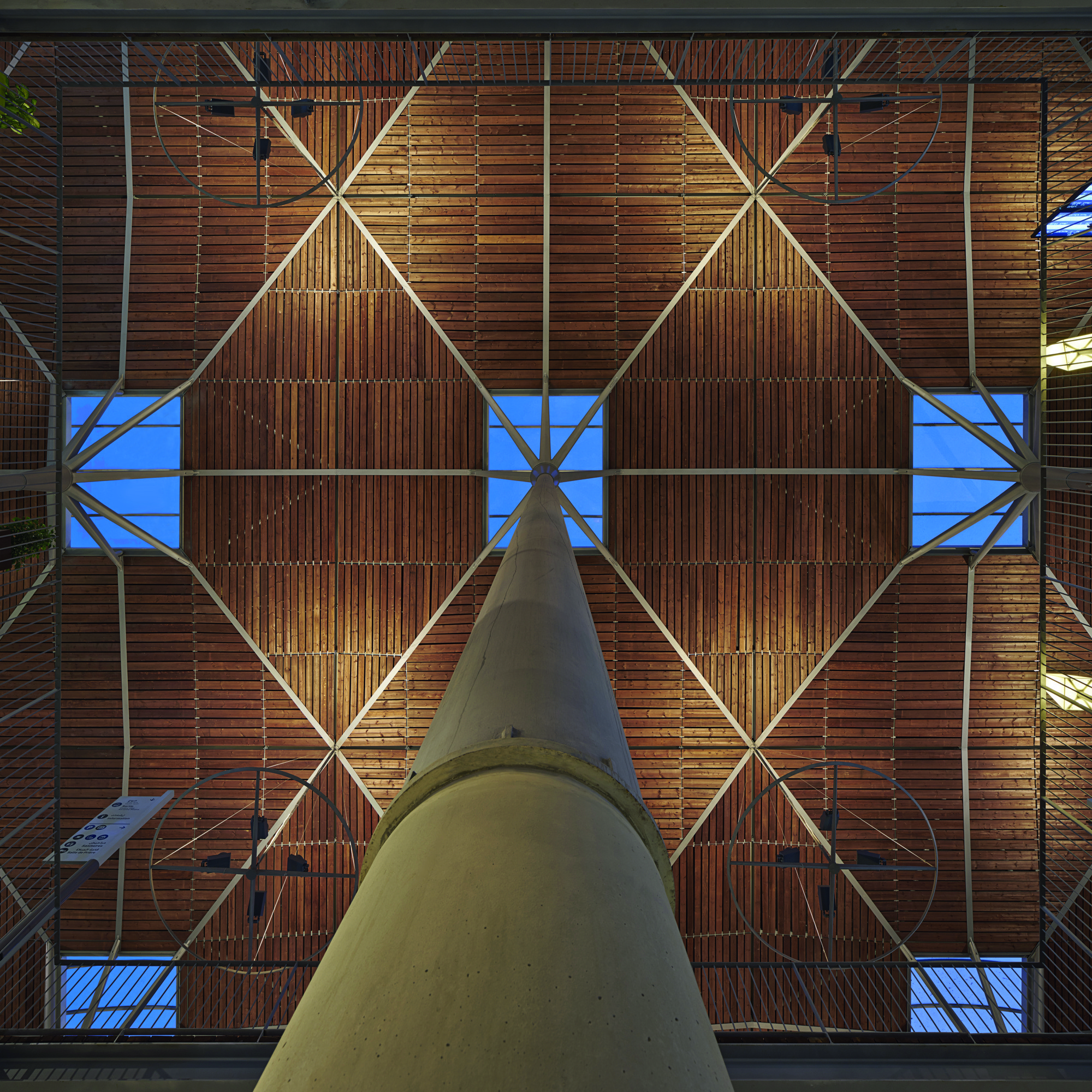 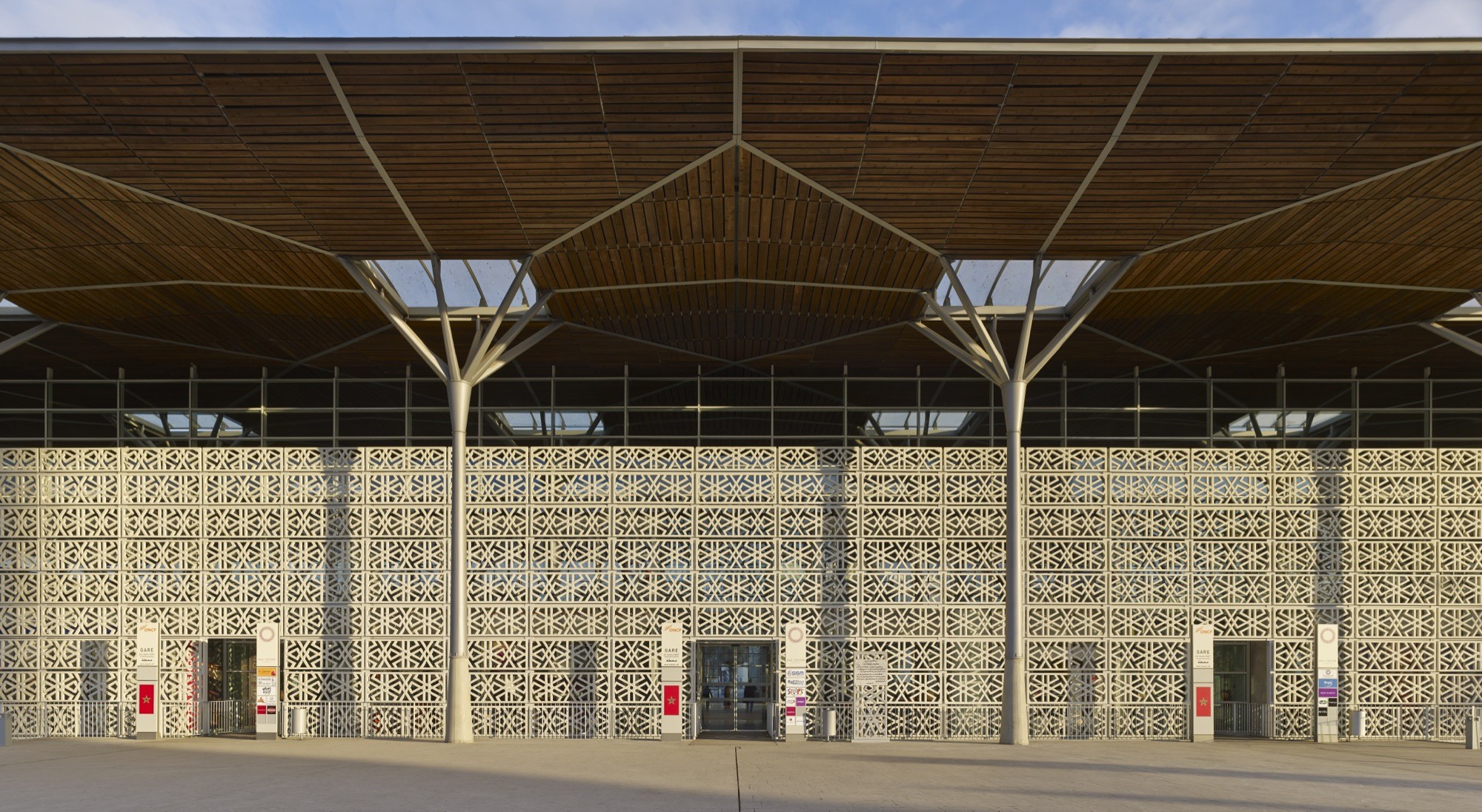 The project also includes a building intended for tertiary sector activities, which is connected to the passenger building and marks the starting point of further developments along the Almohades boulevard. The second stage of the tertiary development project includes two buildings, whose horizontal future development should echo the form of ocean liners and the Art Deco style of Casablanca. Their north facades will offer unimpeded views of the ocean.

The car park is located both under the forecourt and the passenger building thus providing direct vertical access to the platforms. It has only two storeys, which makes usage and management easier, especially in terms of safety. Its entry and exit ramps frame the taxi drop-off areas on the ground level, Boulevard Houphouët Boigny.

Materials and lighting draw on the architectural modernity of Casablanca while benefitting from the main principles of Moroccan traditional architecture (geometric patterns, lighting design, simple and noble materials, use of traditional techniques). Both the station and the forecourt are paved with Benslimane limestone slabs (a province about 80km north of Casablanca), thus extending and unifying the pedestrian areas beyond the concourse. The pillars supporting the roof consist of light-coloured concrete and extend into a steel bole and an aluminium casting bearing the eight branches of the “capital”. 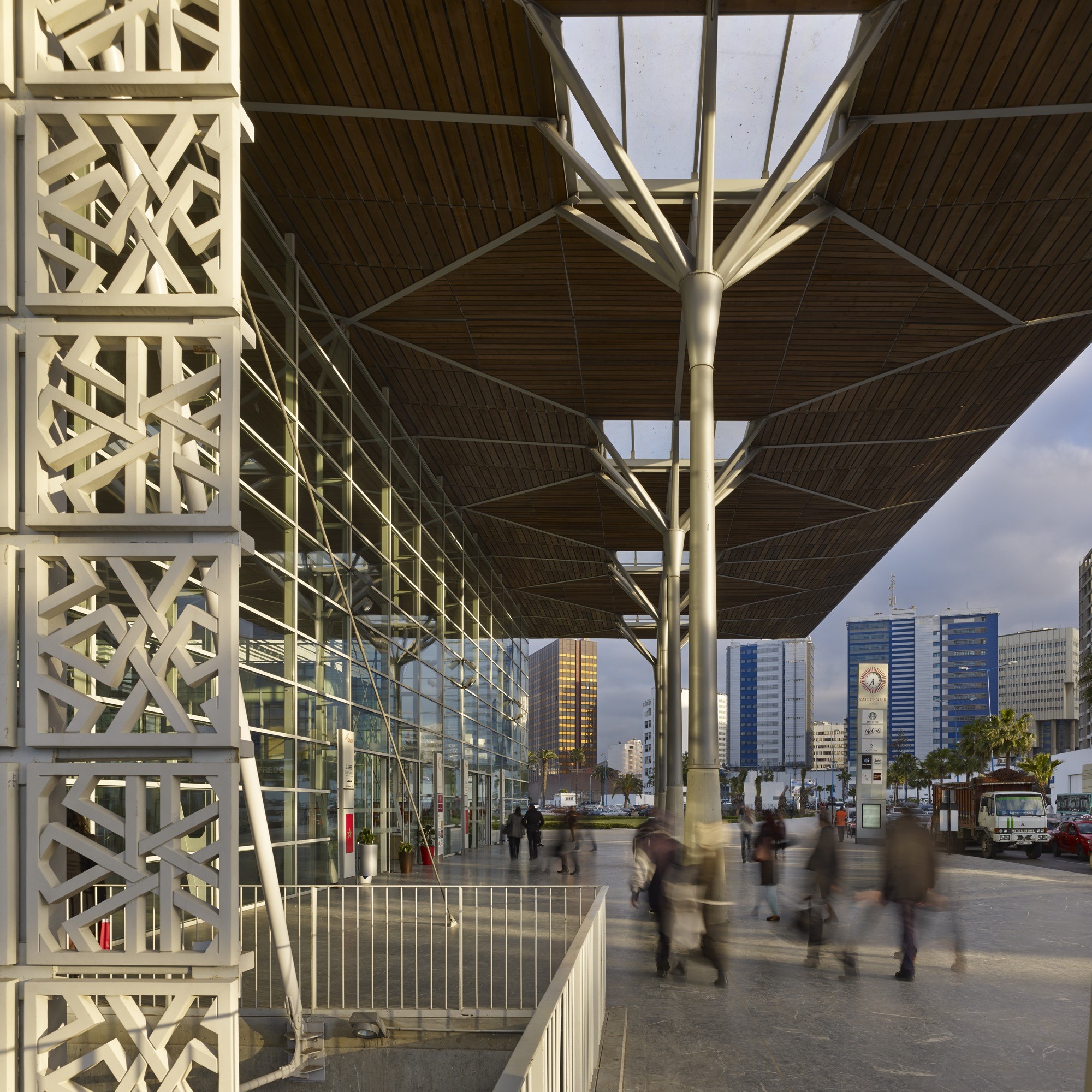 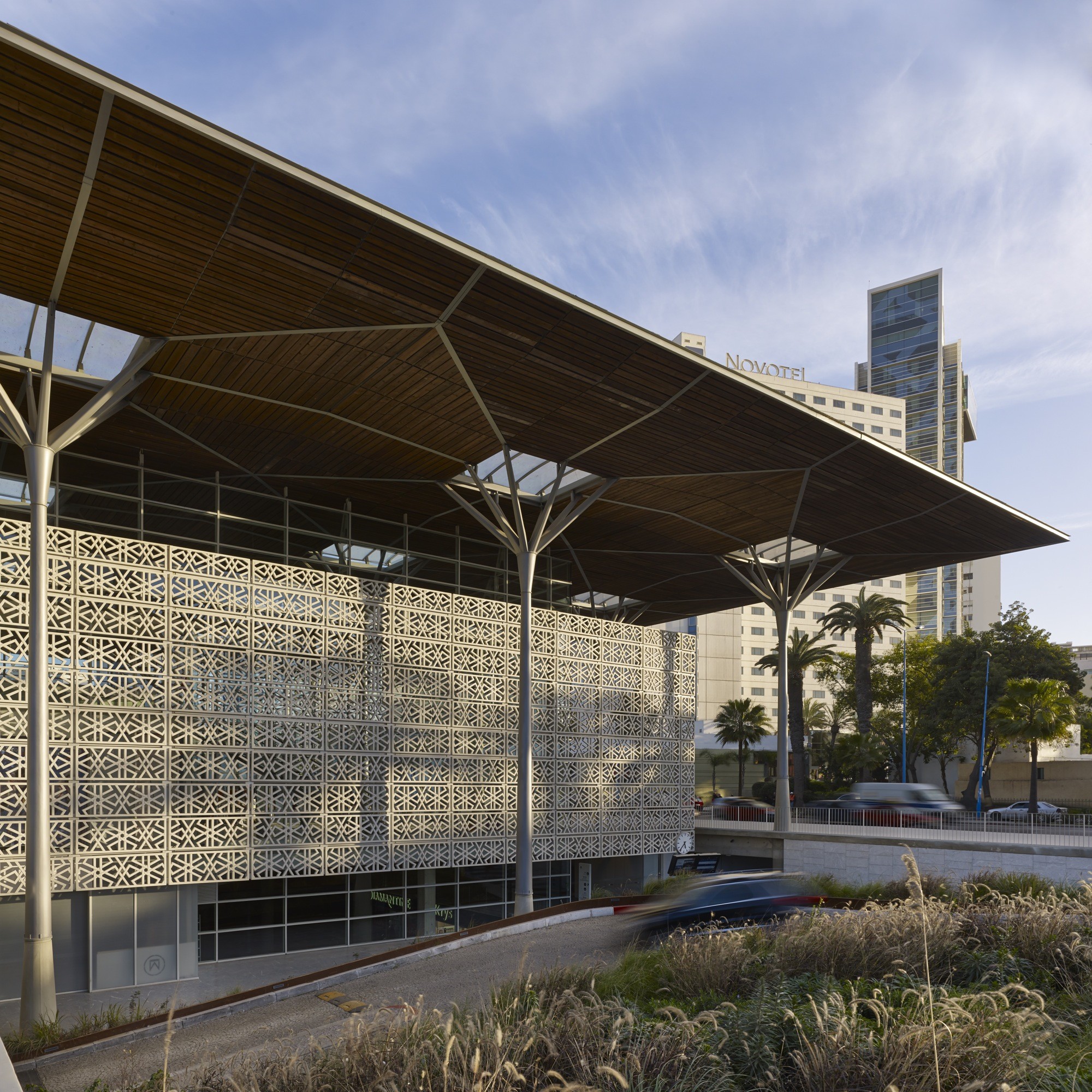 The underside of the roof is made of wood. The facades are clad with clear, transparent glass framed in steel structures. The mashrabiya is made of fiber-reinforced concrete. Kiosks housing shops and services are designed as easily modifiable objects featuring metal structures and glass panels. Their expected lifespan is shorter than that of the building as they should be easily modulated to adapt to the potential development of new programmes in the future, and to reflect changing life styles and the evolving relations between the national rail operator (ONCF) and its users. The main passenger pathways are equipped with automatic doors which allow for fluid movements while minimising air draughts. Upper and lower levels are linked by lifts. The whole building can, thus, be accessed both by mobility impaired users and by people laden with luggage or carrying pushchairs and prams.

Next
Pixa: A Modular Outdoor Shade Concept by Hermann Kamte and Associates