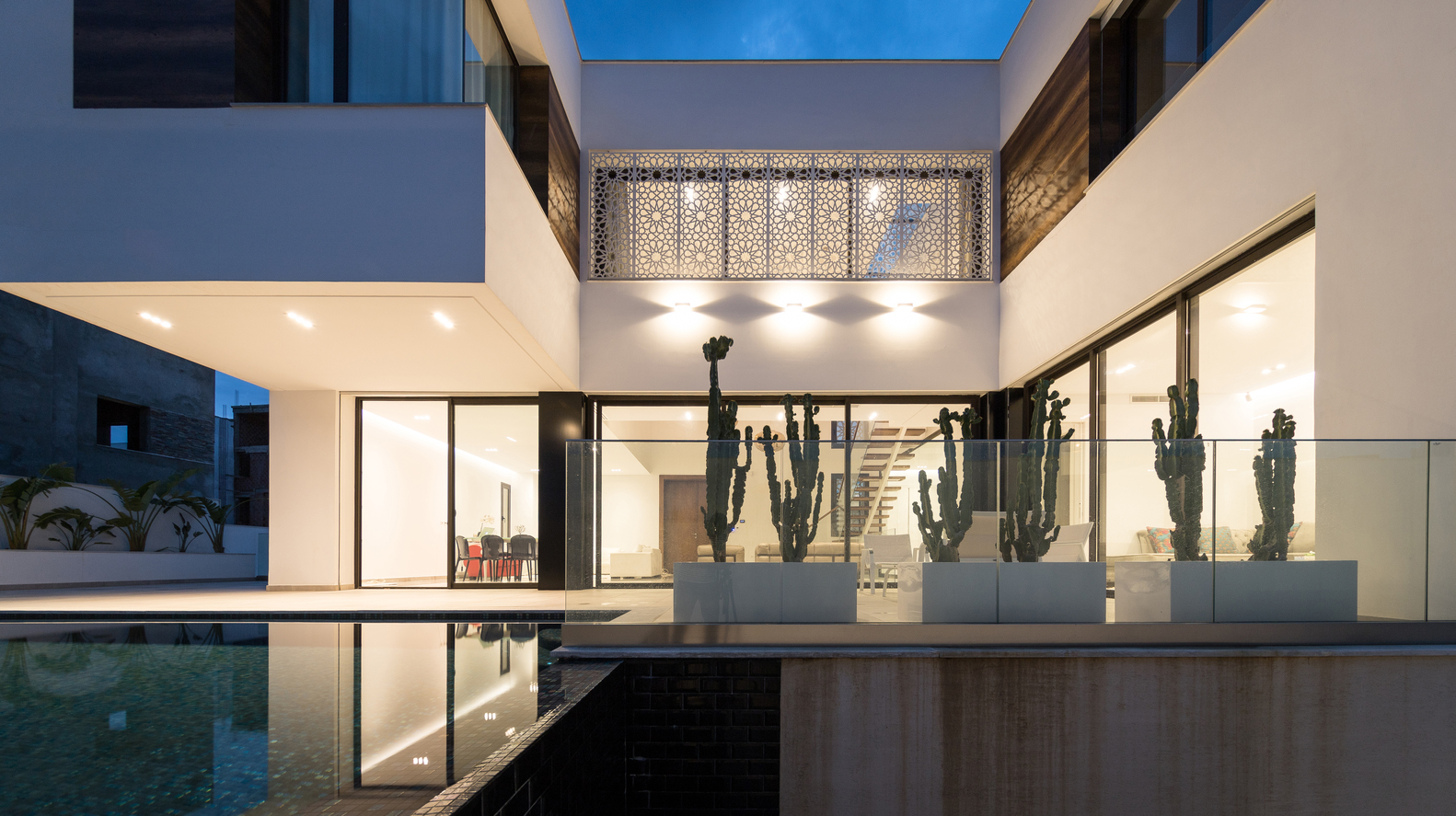 Laying at the confluence of the Mediterranean and the Orient, Villa Z displays a fusion between North African architectural vocabulary and attributes of the Arab and Islamic art. The sheer whiteness of walls, the distinctive interplay with light as well as the Mashrabiya, are merged and rethought to fit the needs of contemporary living.

The villa, located in a rather dense residential district, unfolds a sober and refined façade alongside the street with minimum openness as to preserve privacy. The main entrance, cladded with wood-like HPL, has been covered by a metallic awning that ensures both its demarcation and its protection. Apart from the entrance, this northern façade incorporates a glass slit splitting an otherwise plain wall. The slit, simulating a mashrabiya, is subject to some delicate latticework of an arabesque pattern. It is in the vertical continuity of the staircase, a continuity that is also horizontally expressed with a glazed sky-dome.

This line of light hence becomes a fundamental axis of the overall design, and a metaphorical representation of a privileged connection between the building, the sky, and the earth. An olive tree planted in front of the villa rises as an honorary celebration of Tunisia’s natural heritage and generously brings its part of shadow and greenery. Attention paid to daylight and to the site’s natural elements is not exclusive to the front façade. Fully seizing the site’s topographic potential, and in contrast to the northern front, the southern façade has been garnished with large openings embracing a panoramic view on a suspended infinity pool and a cleared surrounding.

As light plays a key role in the design of Villa Z, all façades and openings have been thought so to highlight the project’s assets and to offer a myriad of atmospheres throughout the day. Openings are placed in synchronicity with the sun’s path optimizing daylighting and immersing all spaces in natural light. A high-performance, low-emissivity, glazing has been used to ensure an optimal thermic balance. Consistent scrutiny has been equally granted to artificial lighting to further emphasizing the project’s assets. Nighttime lighting obeys to per-zone intensity control, offering different atmospheres and a wide range of options for endless indoor personalized usages and outdoor landscapes.

Built on a 540sqm site, Villa Z counts a total surface of 450sqm dispatched over three stories. On the ground floor, daytime spaces revolve around a double-height living room that is entirely open on the kitchen and the dining room, and by extension, on the terrace and the outdoor pool. Floating stairs lead to an indoor bridge splitting the first floor into two parts, one being reserved for the children rooms and the other being entirely dedicated to the parental suite, which is a three-meters-deep cantilevered volume overlooking the pool. As per the garden level, it is dedicated to leisure time but also work, while welcoming a playground.

Playful, sophisticated, and discreetly bathing in its delicately intertwined flows of light and shadow, its subtle contrasts between opacity and transparency, voids and volumes, the mineral and the vegetal, Villa Z stands as an ode to its native land and to the spirit of its seedbed.