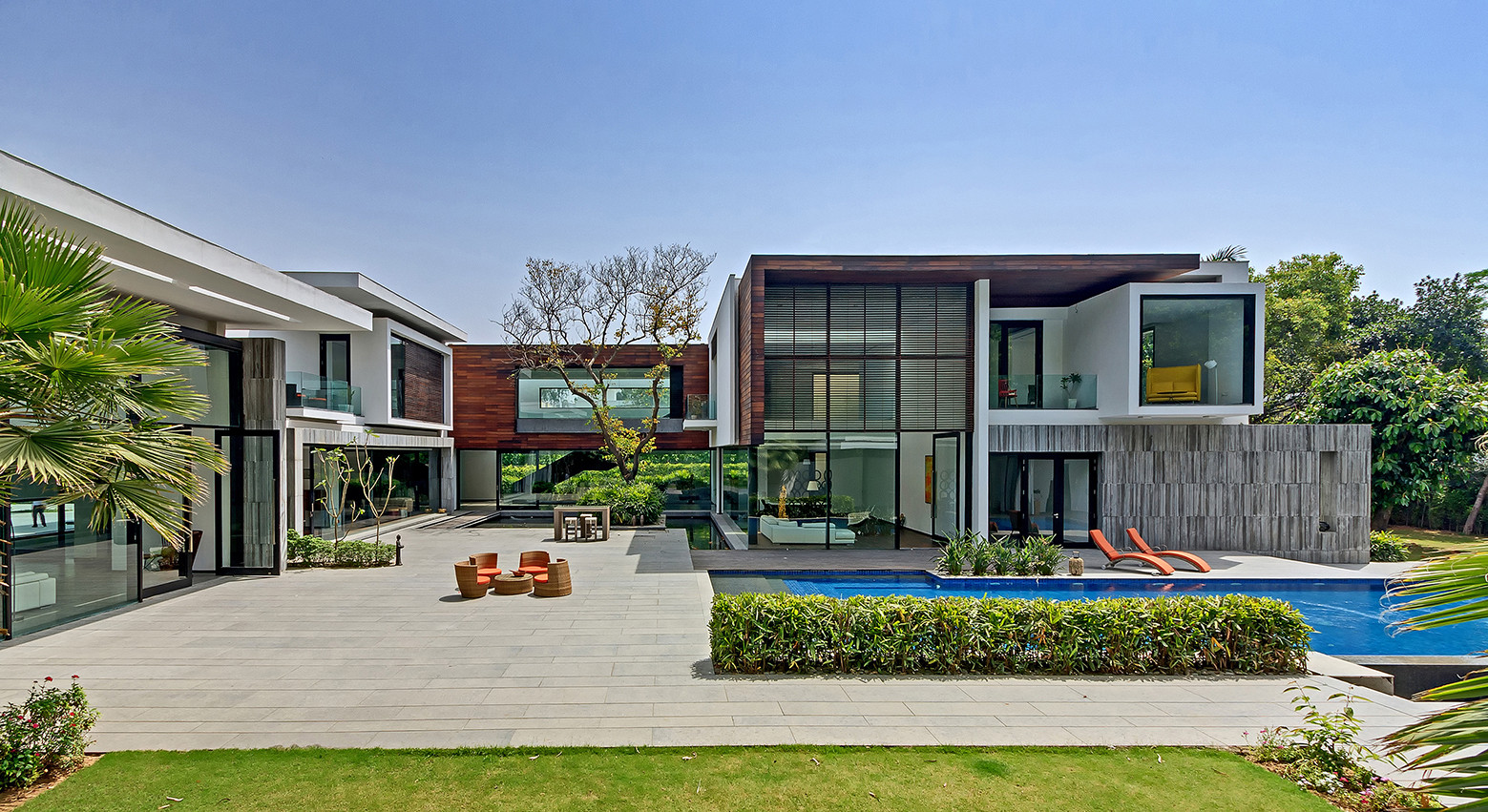 THE THREE TREES HOUSE IN INDIA BY DADA AND PARTNERS

Dada and Partners’ “Three Trees House” in India is a sprawling “FarmHouse” covering over 1500sqm. Rectilinear volumes meander around existing vegetation, most especially three notable trees, hence the name. Their signature straight lines and use of material (stone, wood, granite etc) are reminiscent of some of their other residential projects, but the three trees house stands out by immersing itself into the site.

Here’s how the architects describe it,

Set on a verdant land parcel dotted with large mature trees, the Three Trees House house is nestled -much like a fork- between three large trees. The premise for choosing to situate the building amidst the trees was to preserve the existing trees while enjoying the natural setting in close proximity of the habitable areas.

The house is conceived as an assembly of two fairly rectangular blocks, the east facing front block and west facing rear one. Both are connected by a narrow, transparent, staircase block. The largest tree of the three, a flowering Kachnar (bauhinia), becomes the centerpiece of the courtyard space. The shaded north facing courtyard is further animated with different rooms fronting onto it along with the large overhang canopies providing constant play of light and shade. As experienced from within the house, this space brings an enhanced sense of openness inside and also unfolds constantly changing views of the outdoors, as well as the building, as one moves around the house and vertically between different levels of the house. 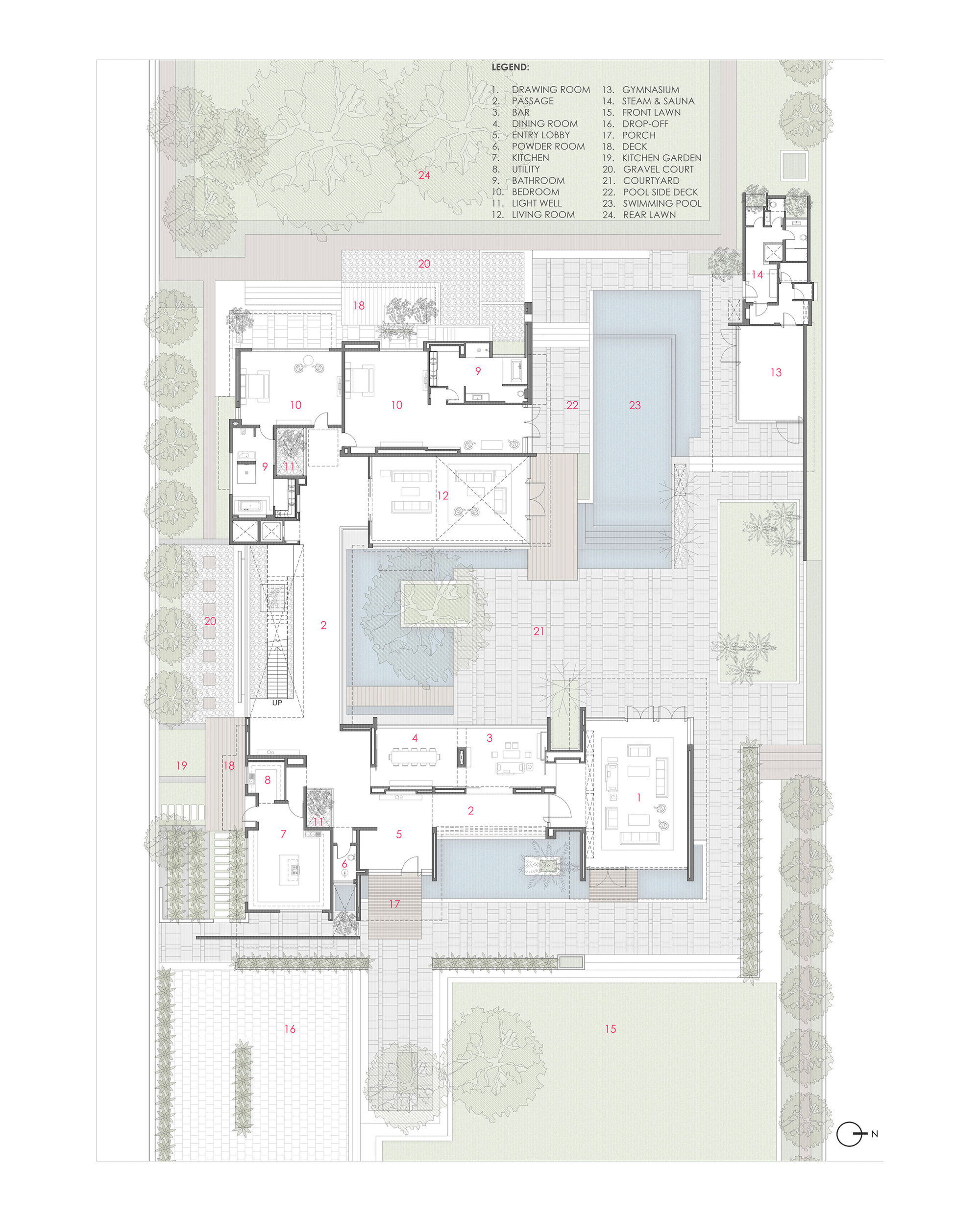 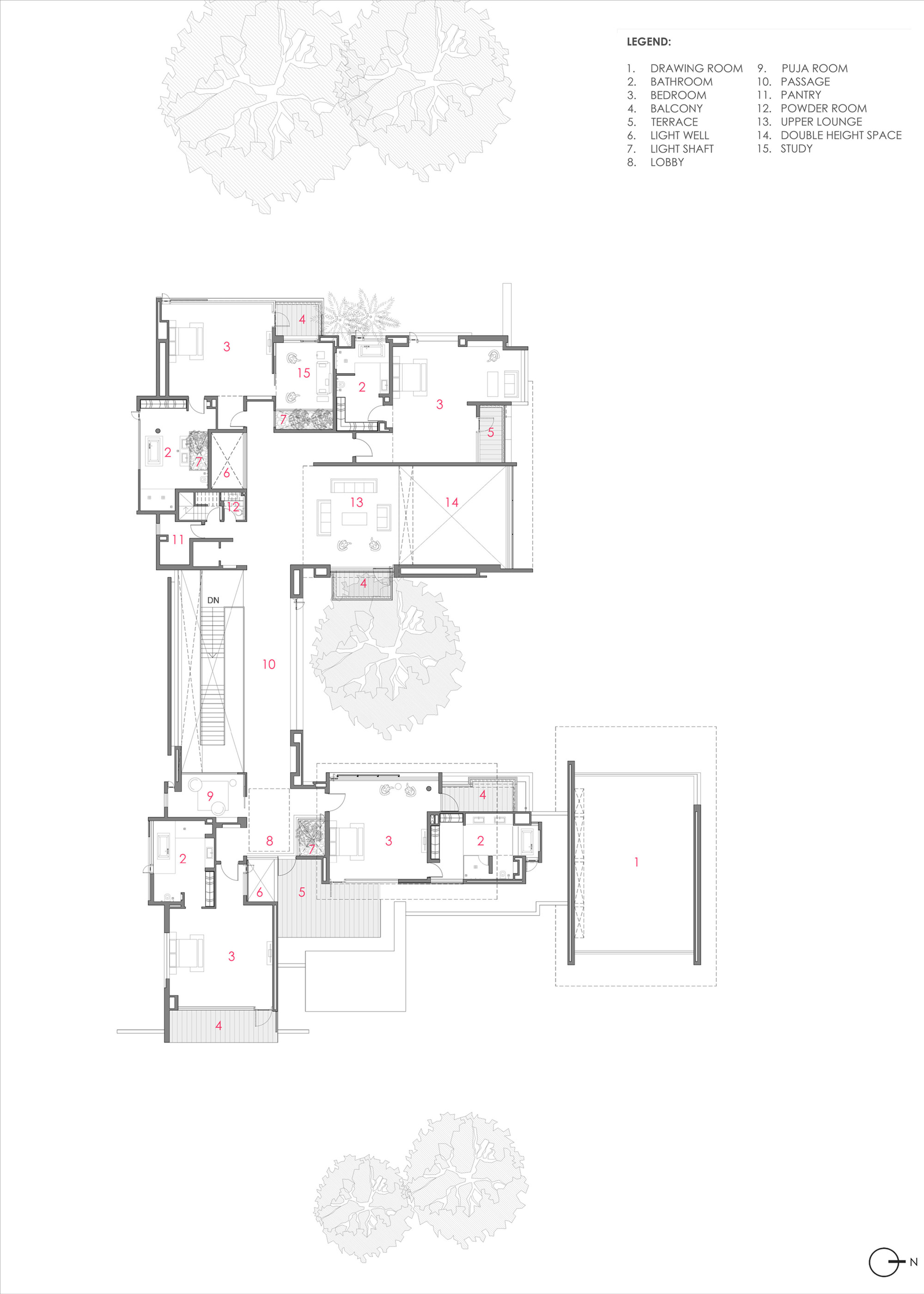 The front or east block has the public functions such as the entry lobby, drawing room, dinning, and bar all of which face the large front lawn as well as the relatively intimate courtyard. The rear block has a large double height family living room which opens out to the courtyard and the pool deck and two bedrooms facing the rear lawn. The upper level has four bedroom, puja room, and a lounge area for the family to gather. The gym and sauna pavilion sits just across the swimming pool, along the Northern face of the property, and squares-off the sense of enclosure around the courtyard. 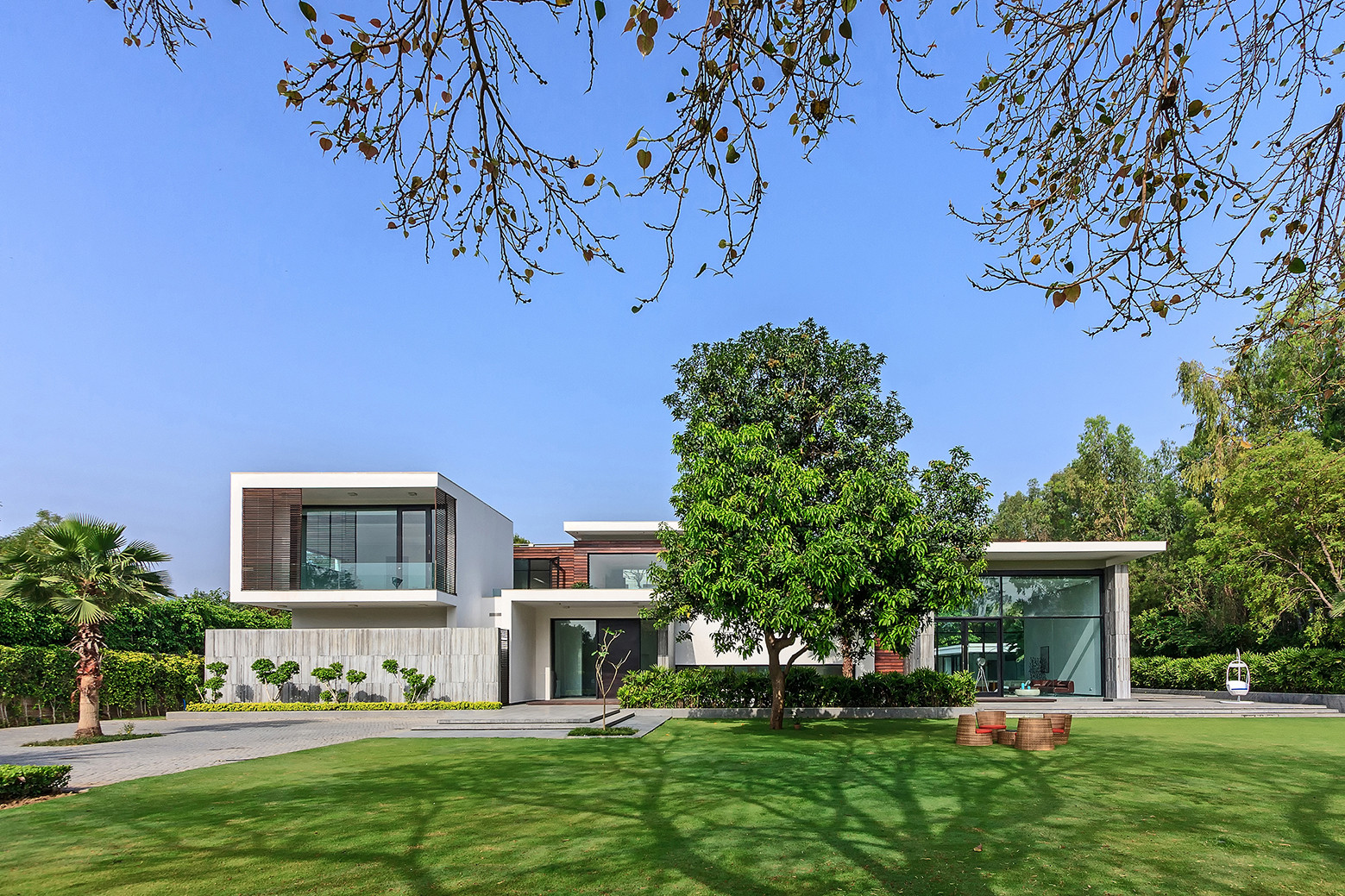 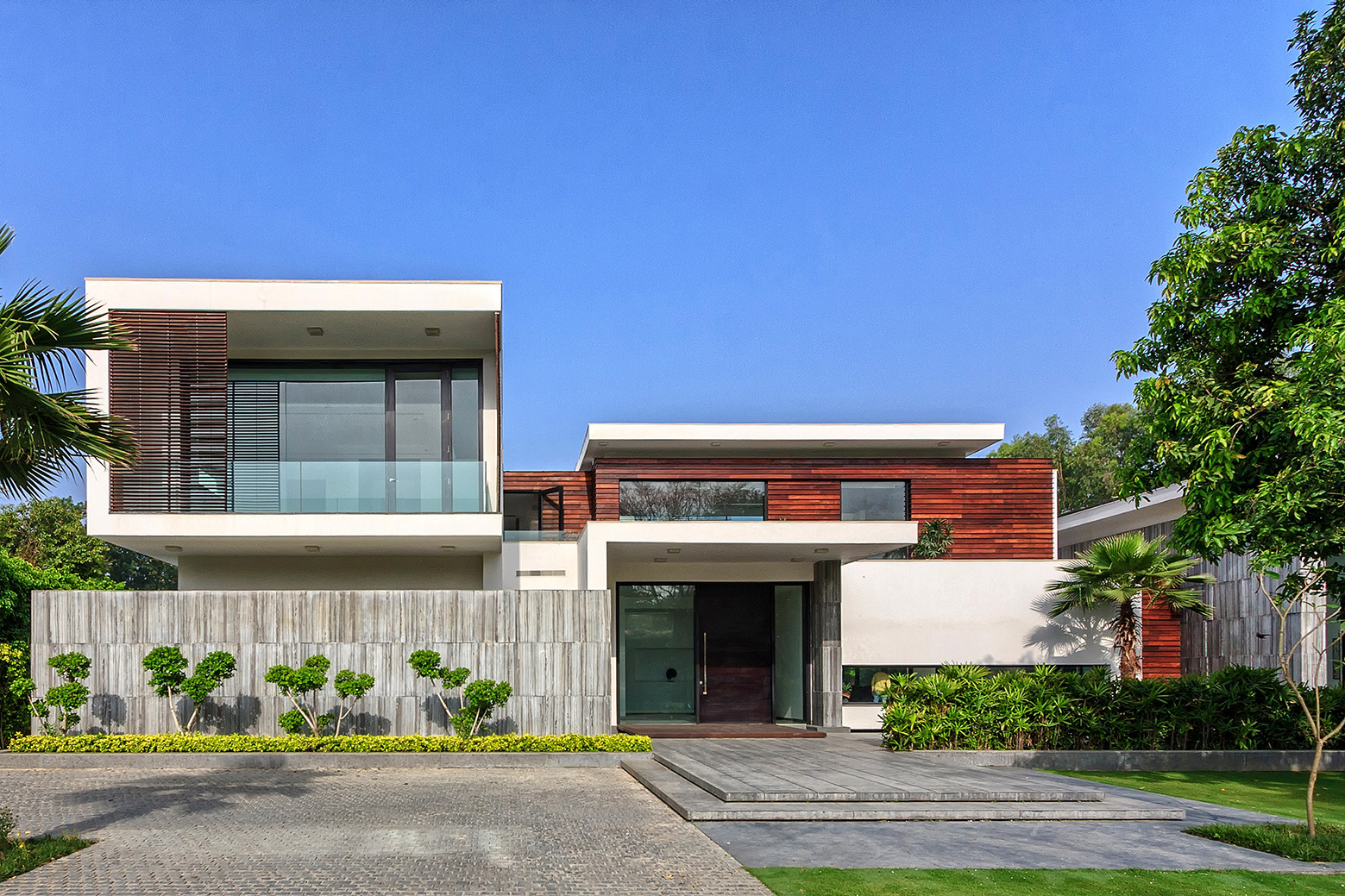 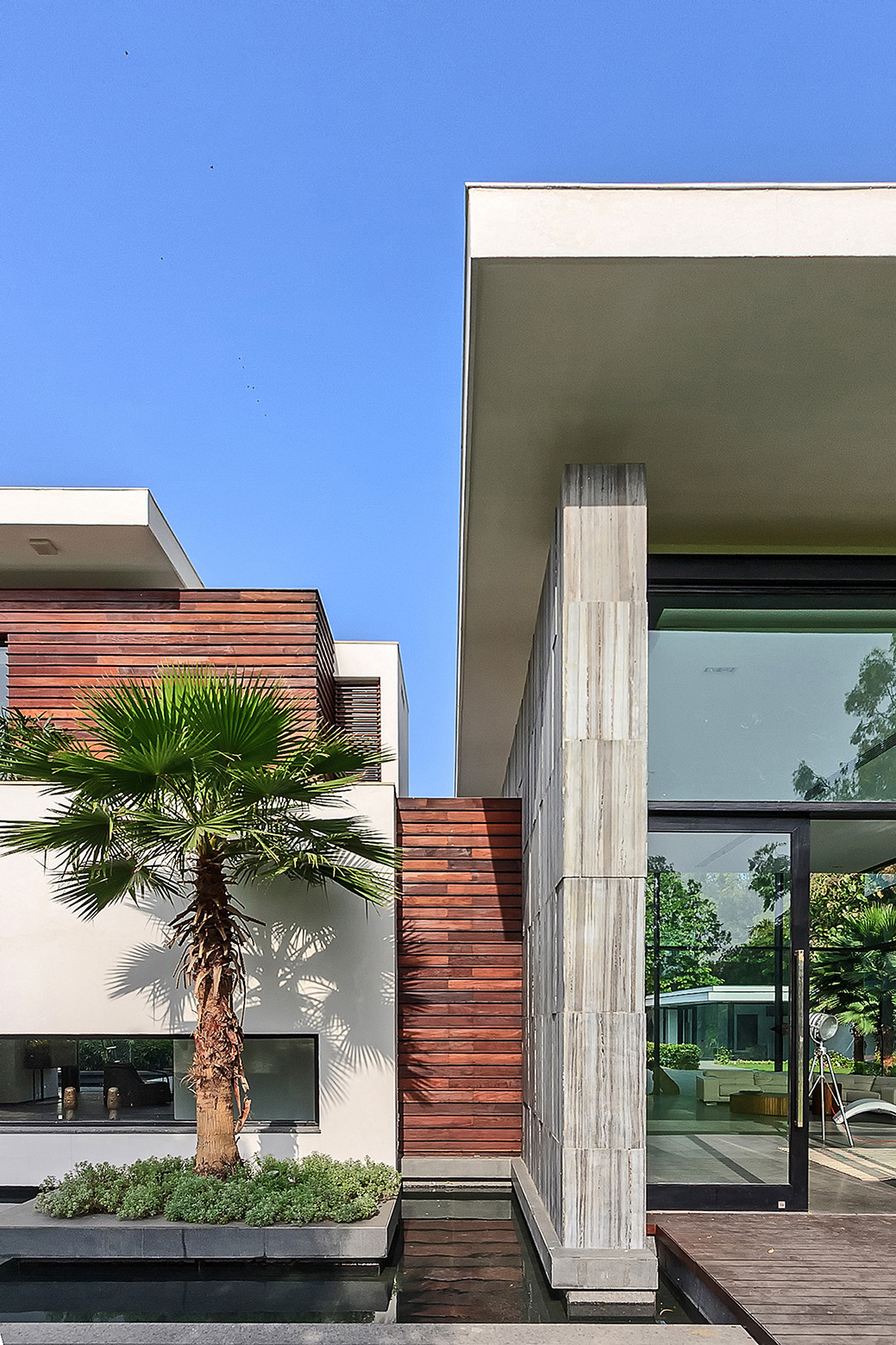 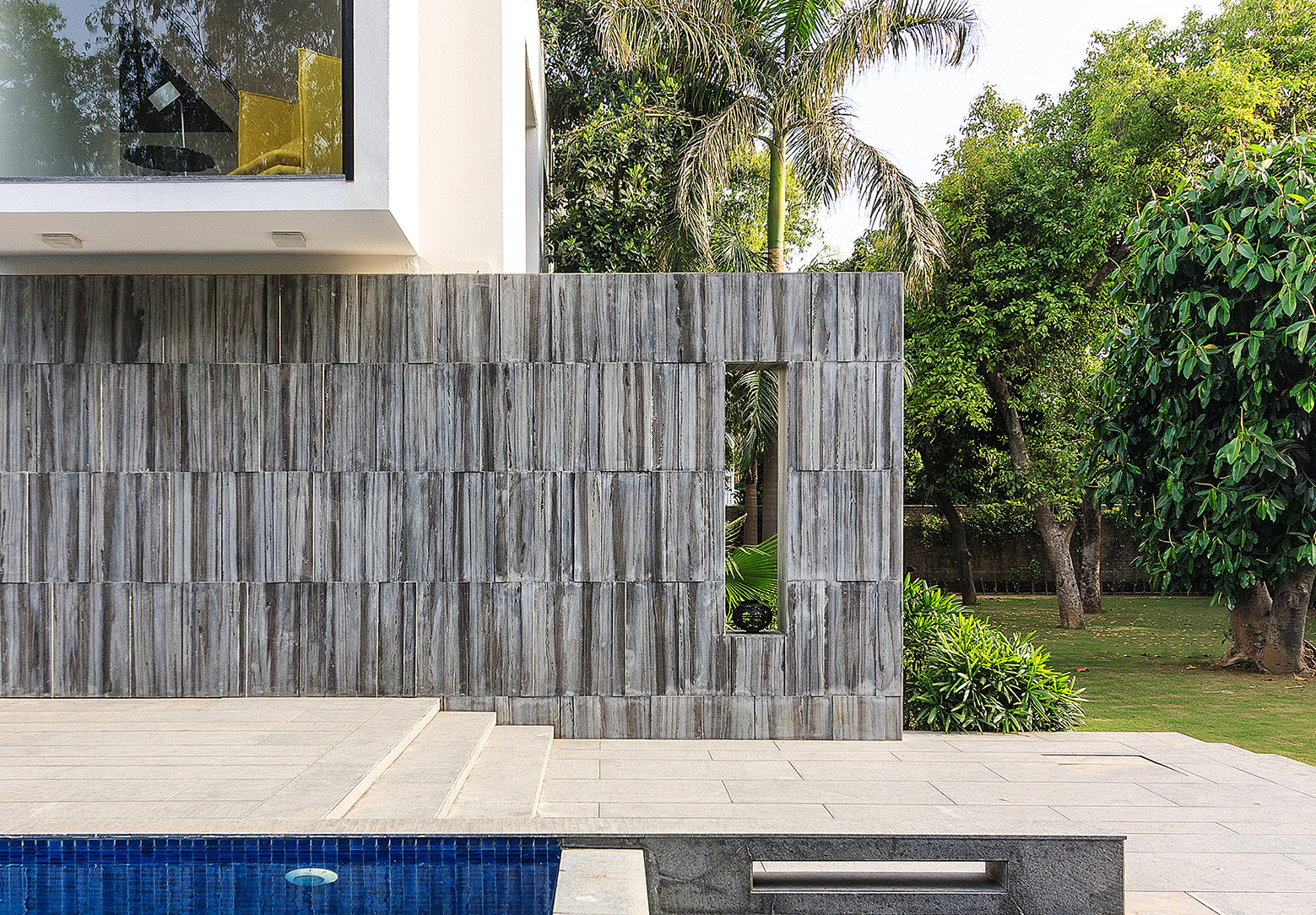 One of the the clients needs was of a large and lofty formal drawing room spilling out to a garden. This resulted in a three side open, 20 feet tall, lantern like space framing views to the picturesque front lawn on the east and the eventful pool-side on the west side. 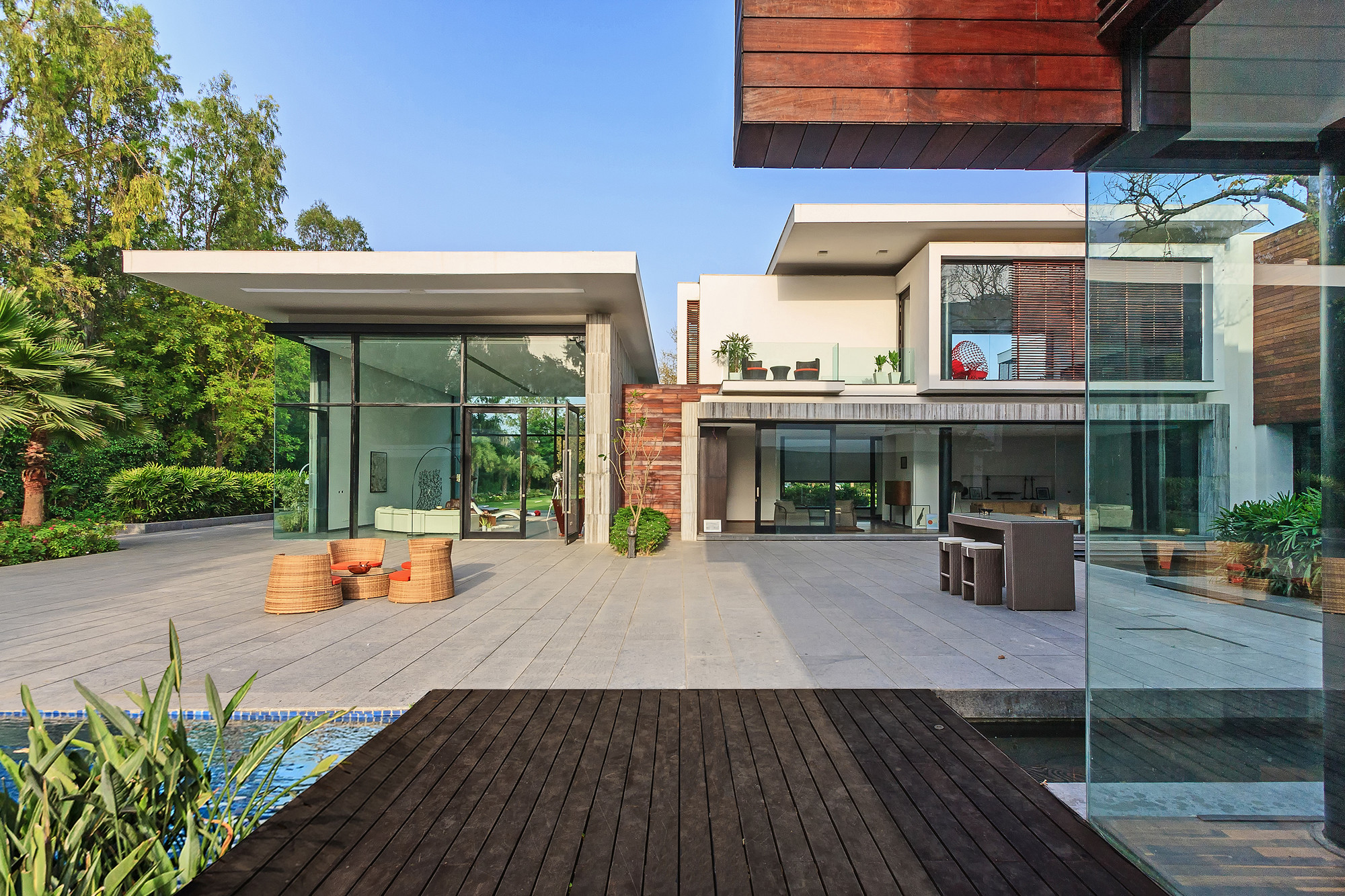 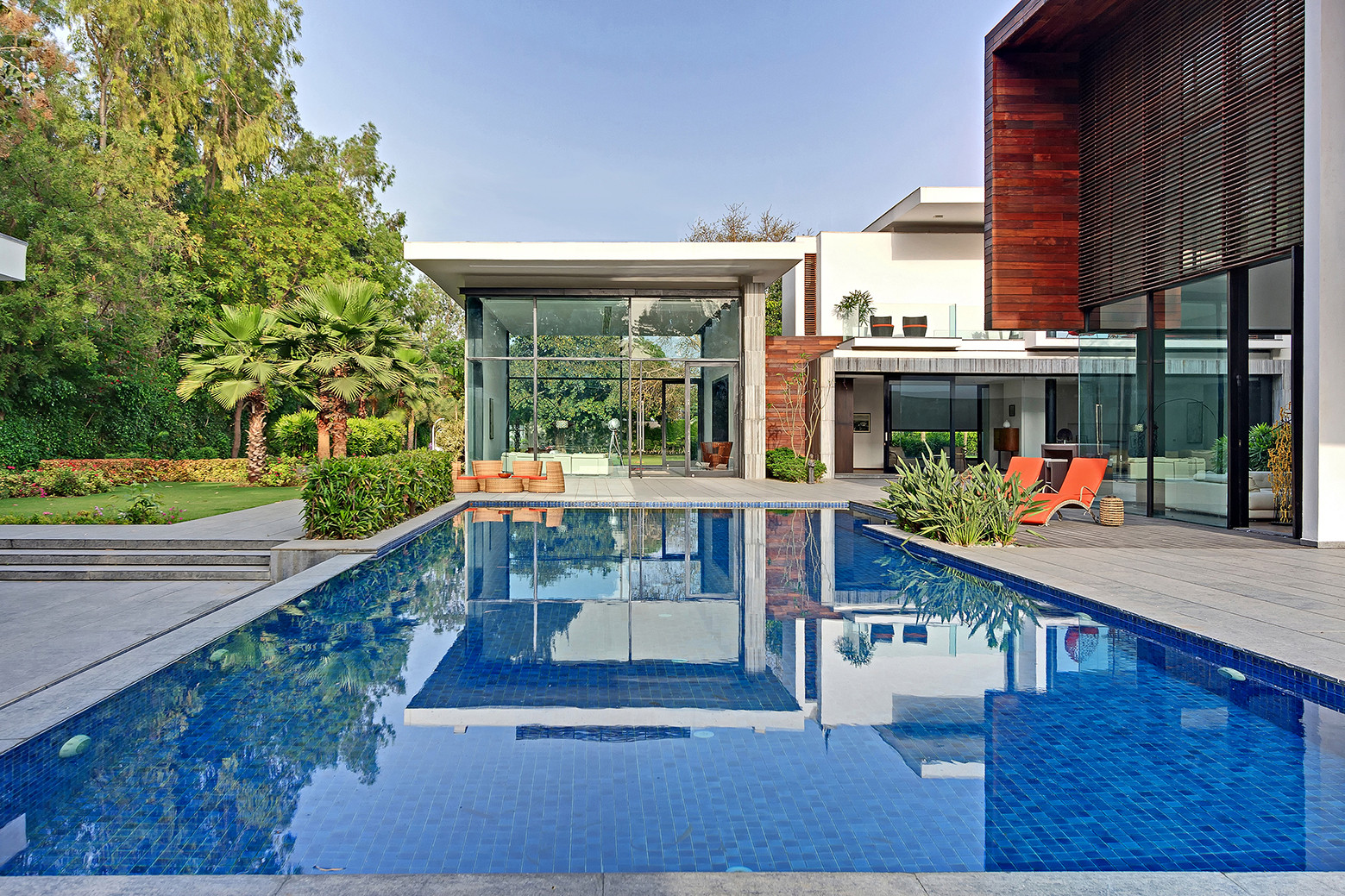 Within this lush almost ambrosial setting, the predominantly hard and monolithic landscape design creates a deliberate experiential counterpoint. The building facade also becomes part of this setting, especially at the ground-plane level where, every so often, large vertically furrowed stone-clad panel walls frame the open space expanse. The expansive and largely untouched front and rear lawns are anchored by couple of anachronous ficus trees that act as generous foreground for the house. It is the courtyard with its orchestrated reflective pool, infinity-edged swimming pool, and floating wooden decks which engages with the mostly transparent, folding threshold of the house. 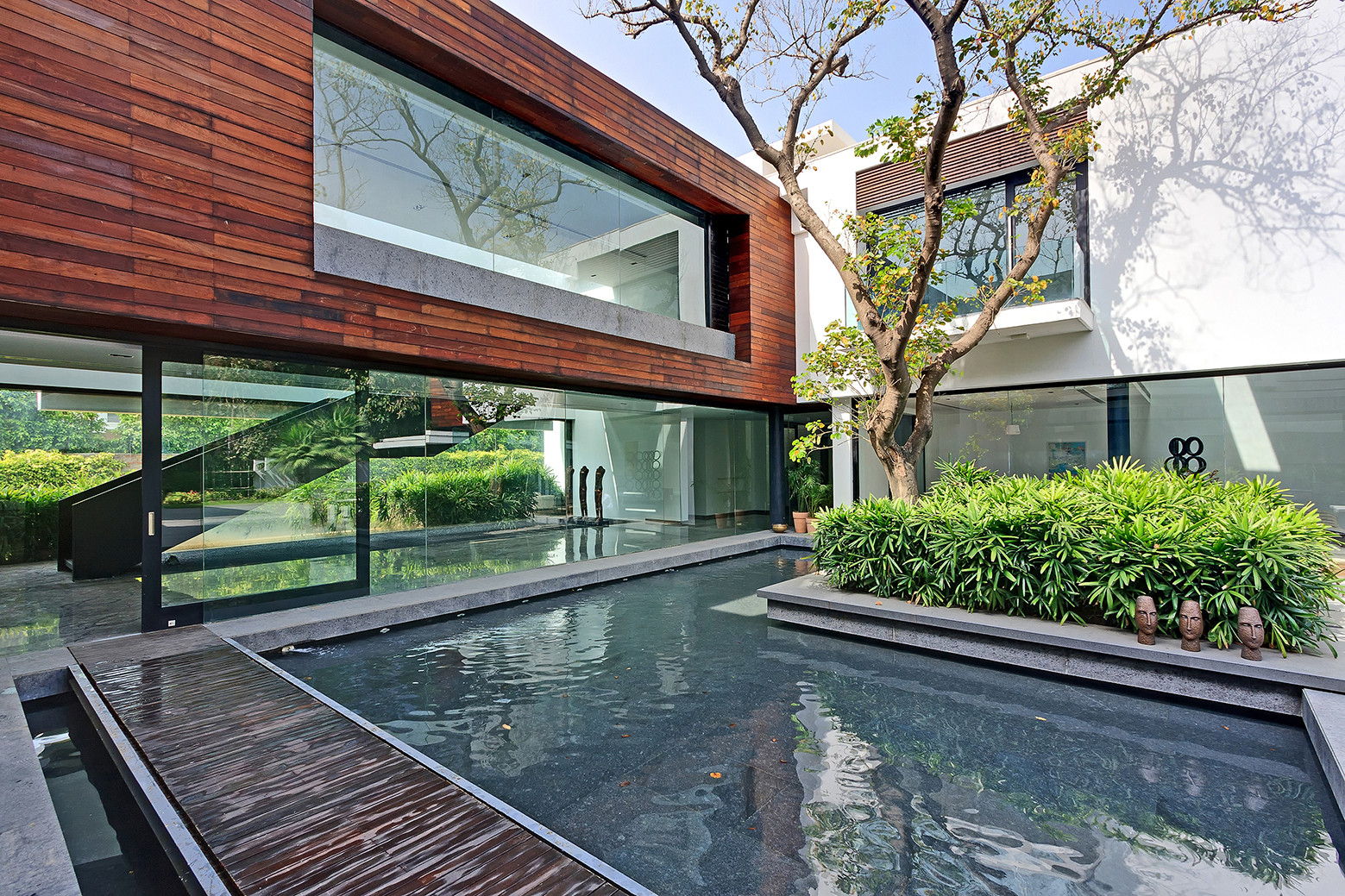 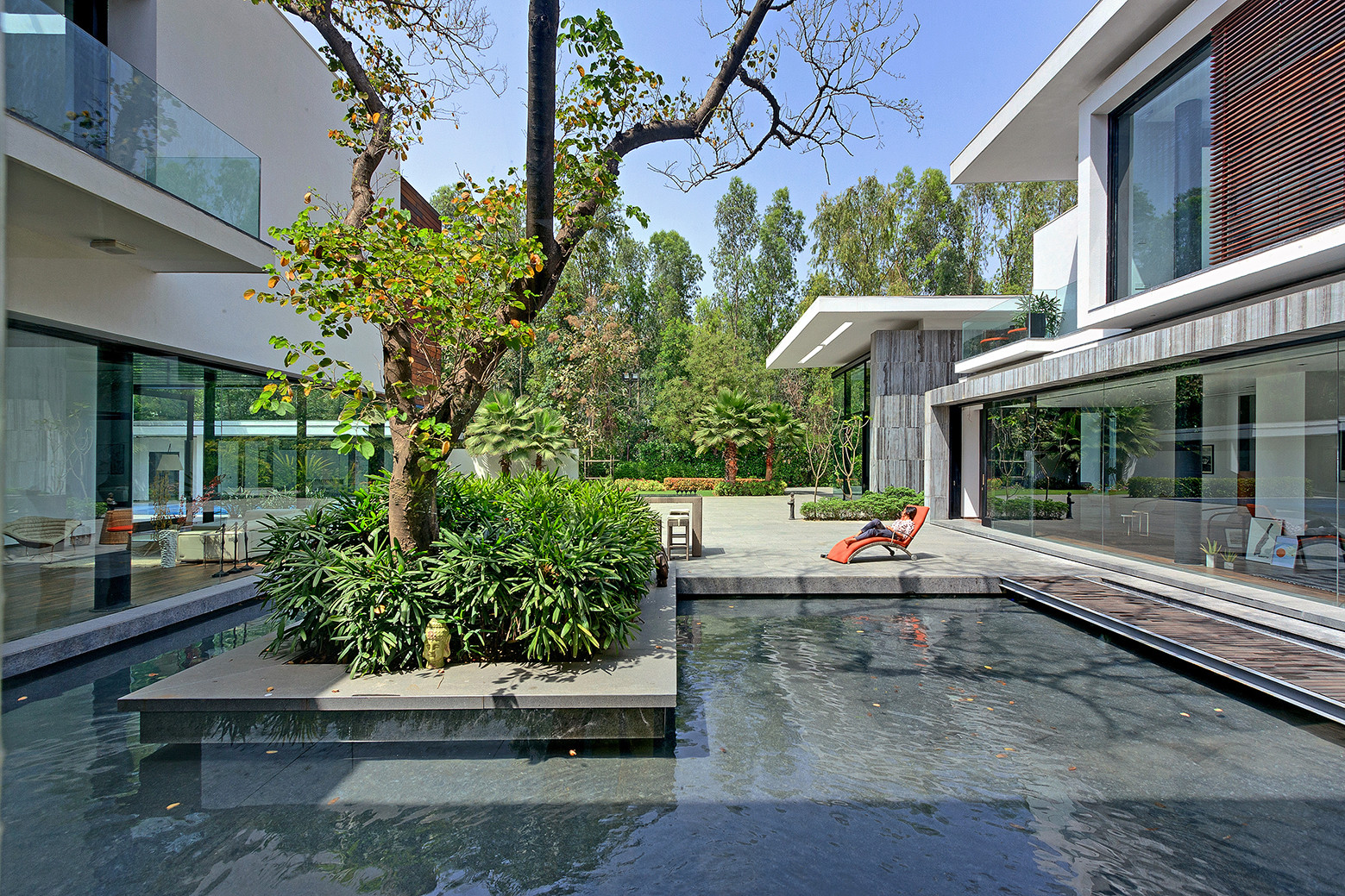 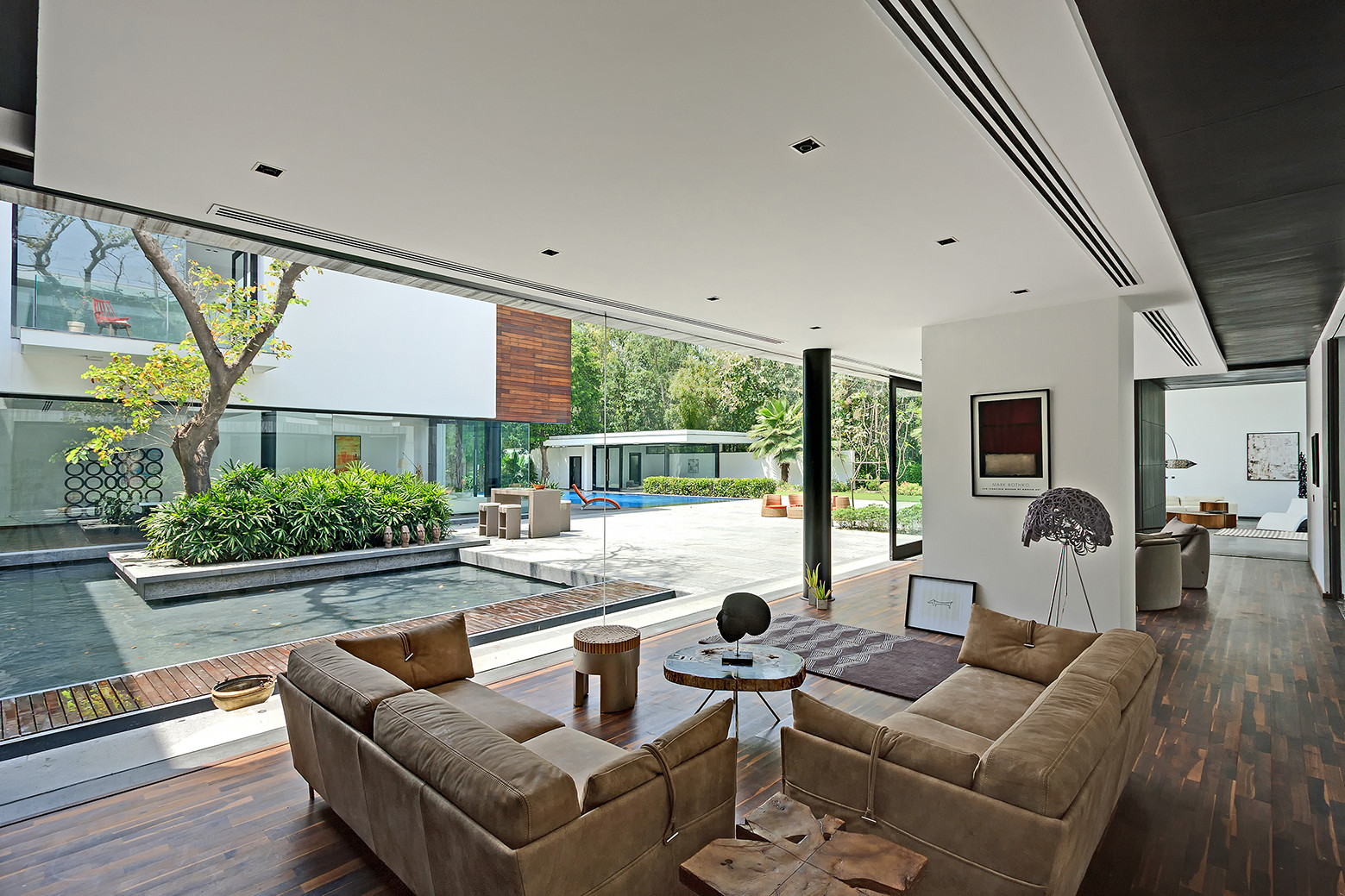 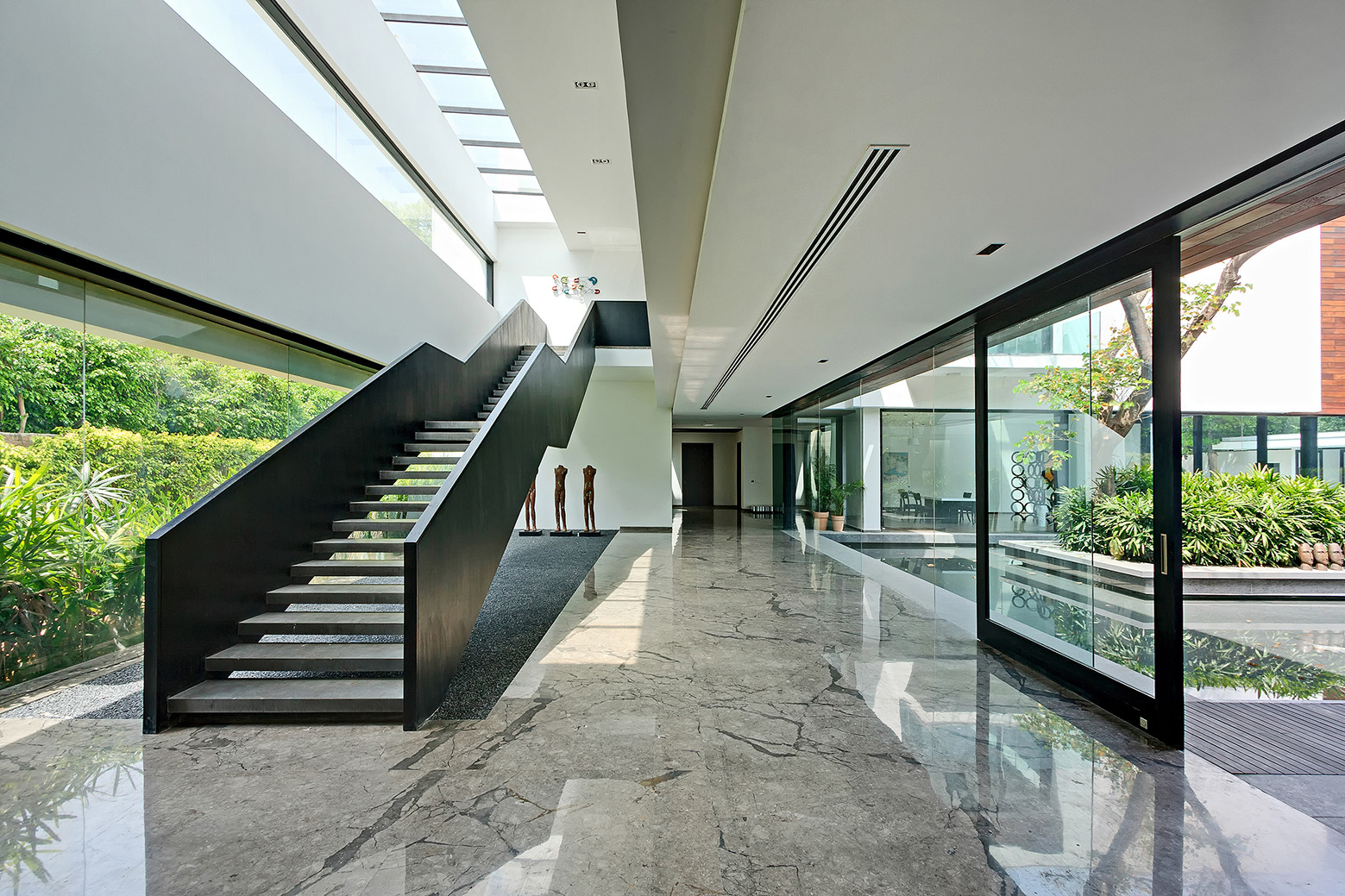 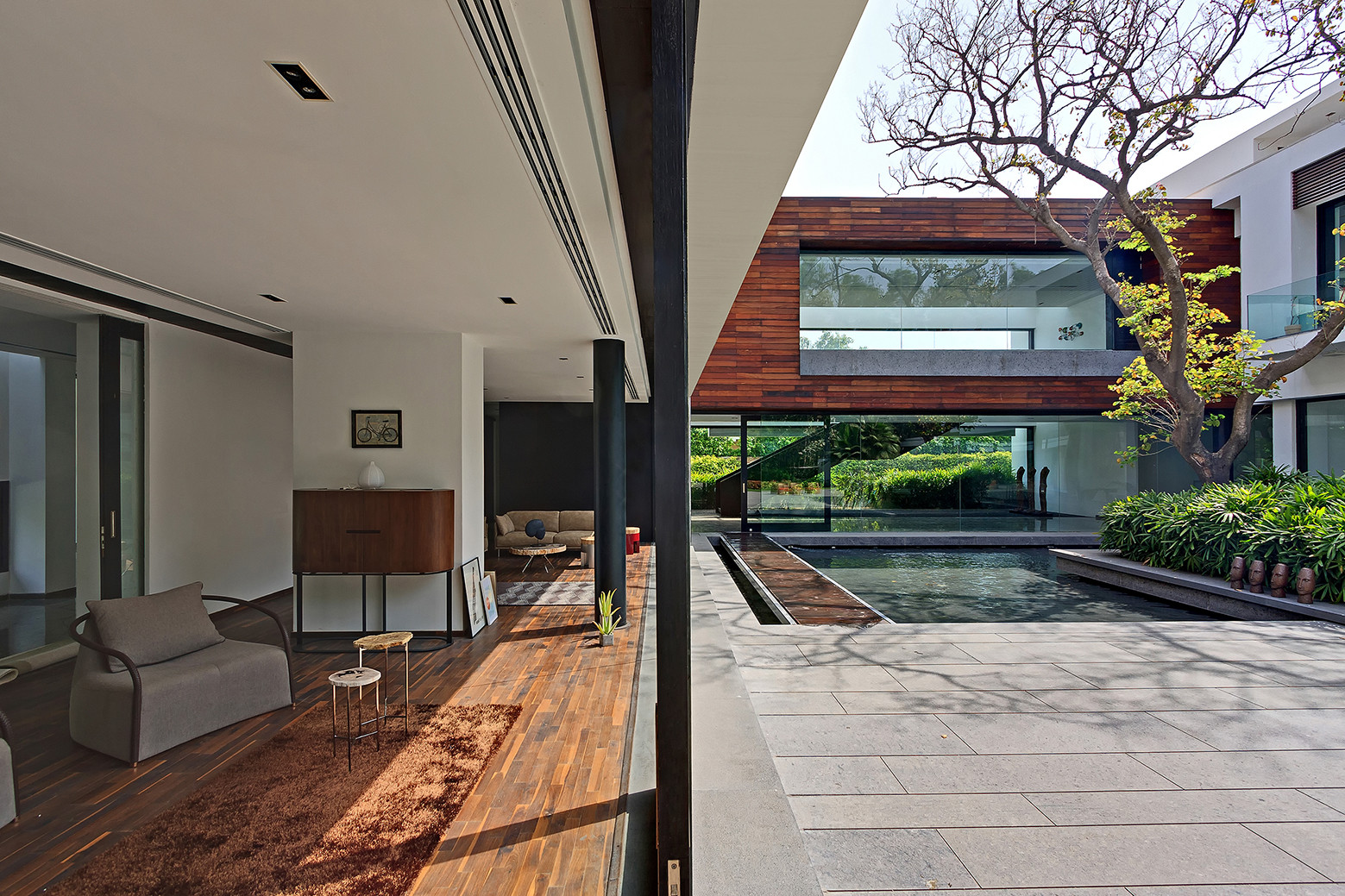 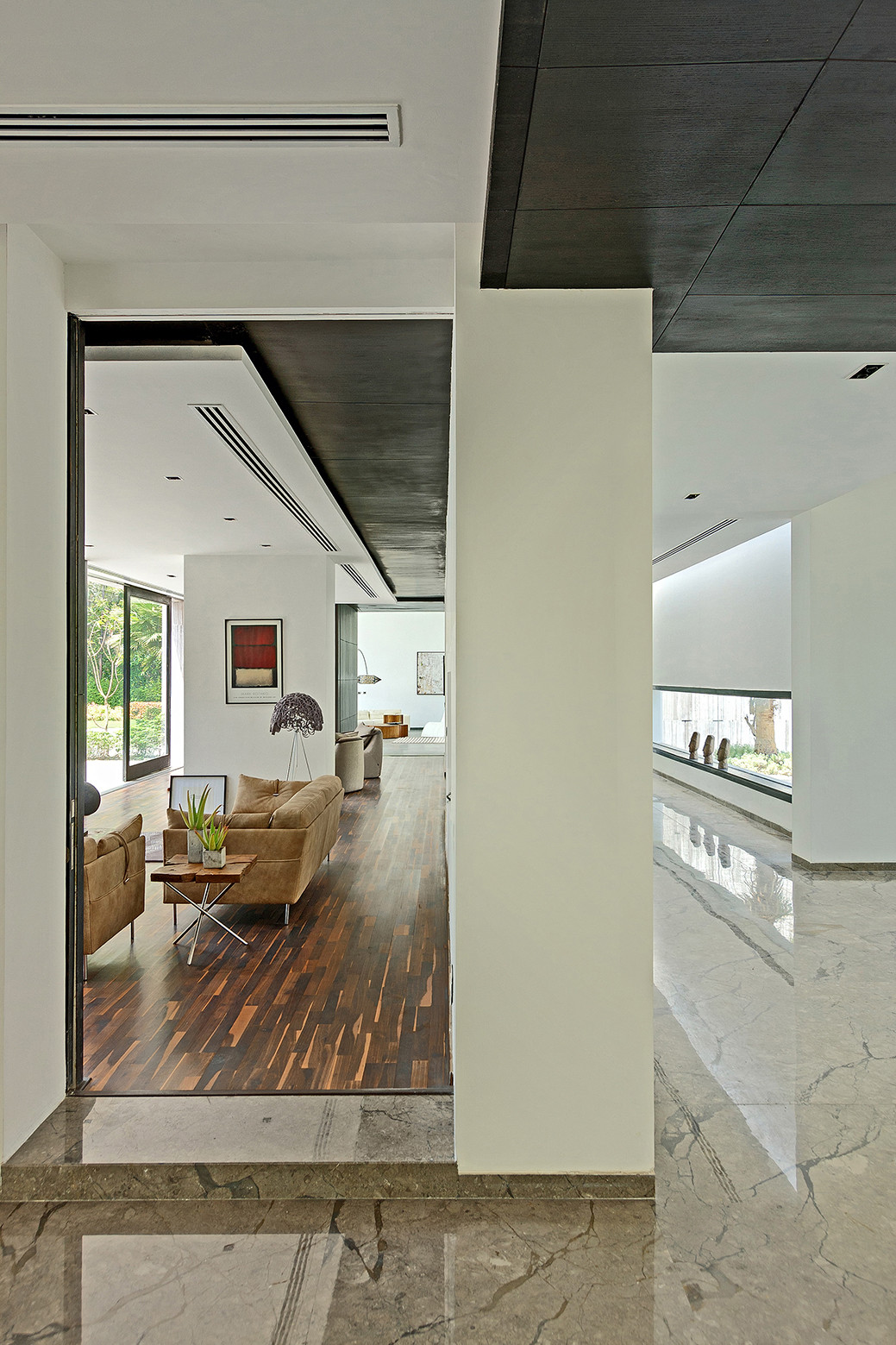 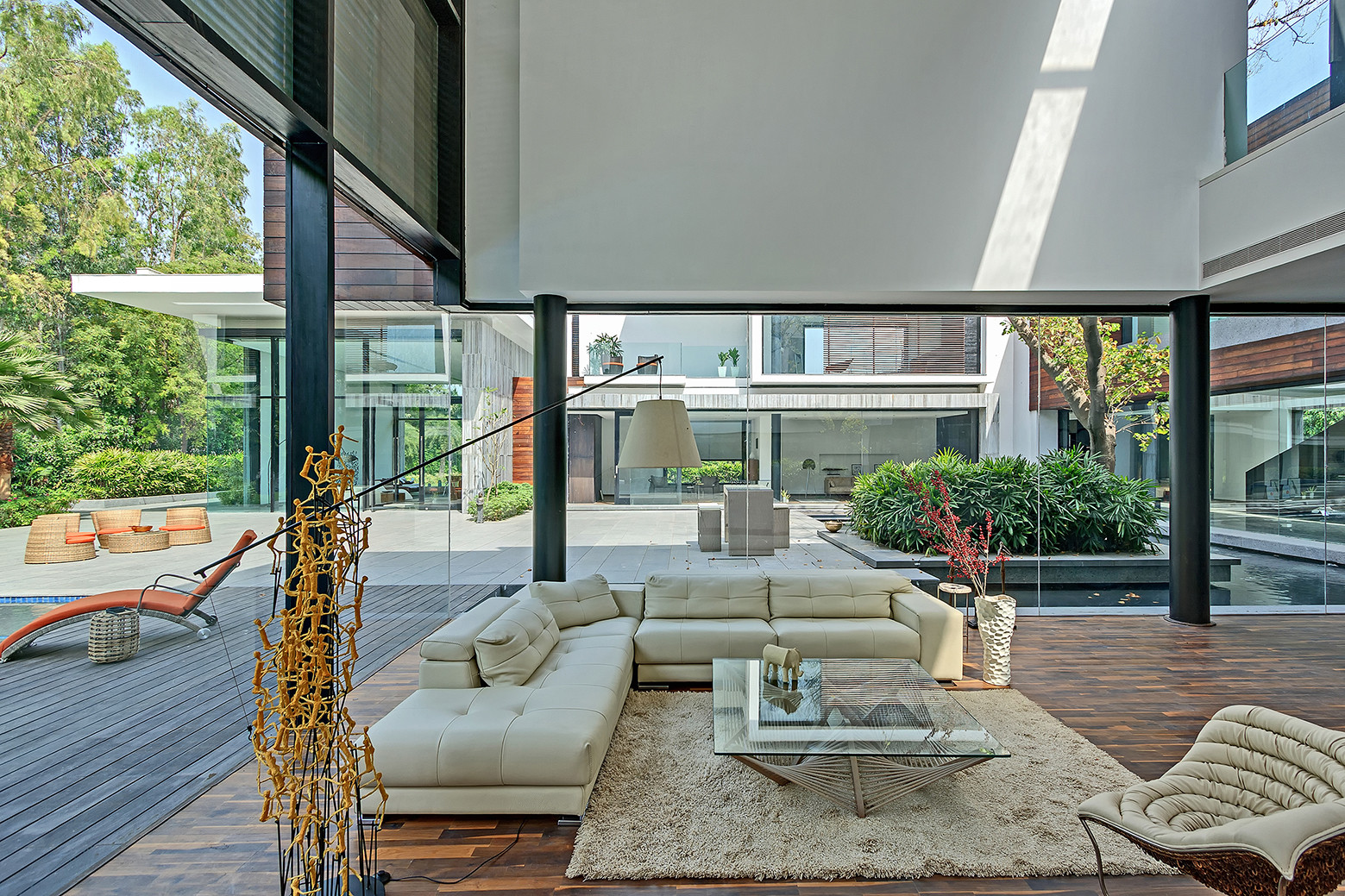 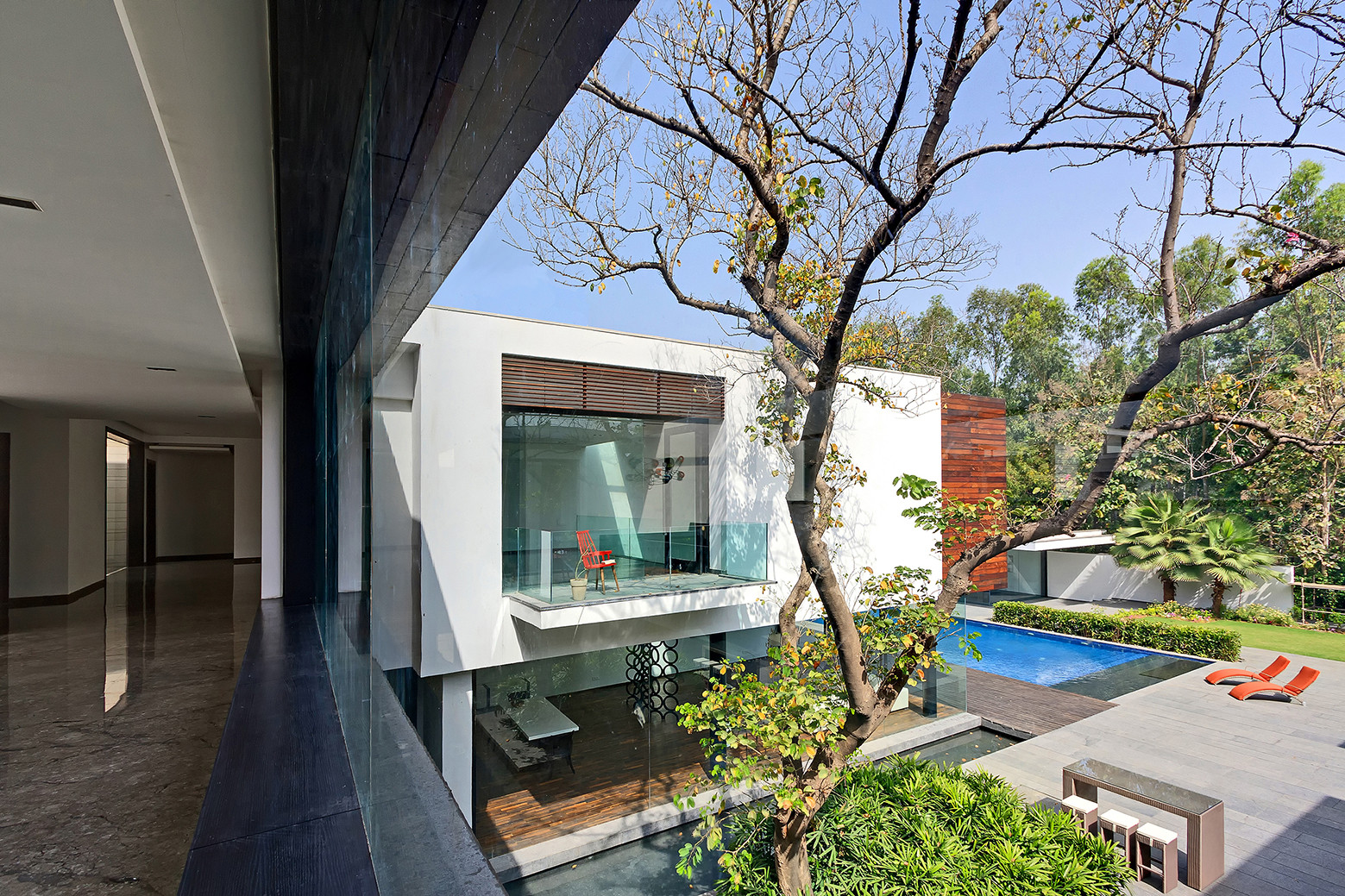 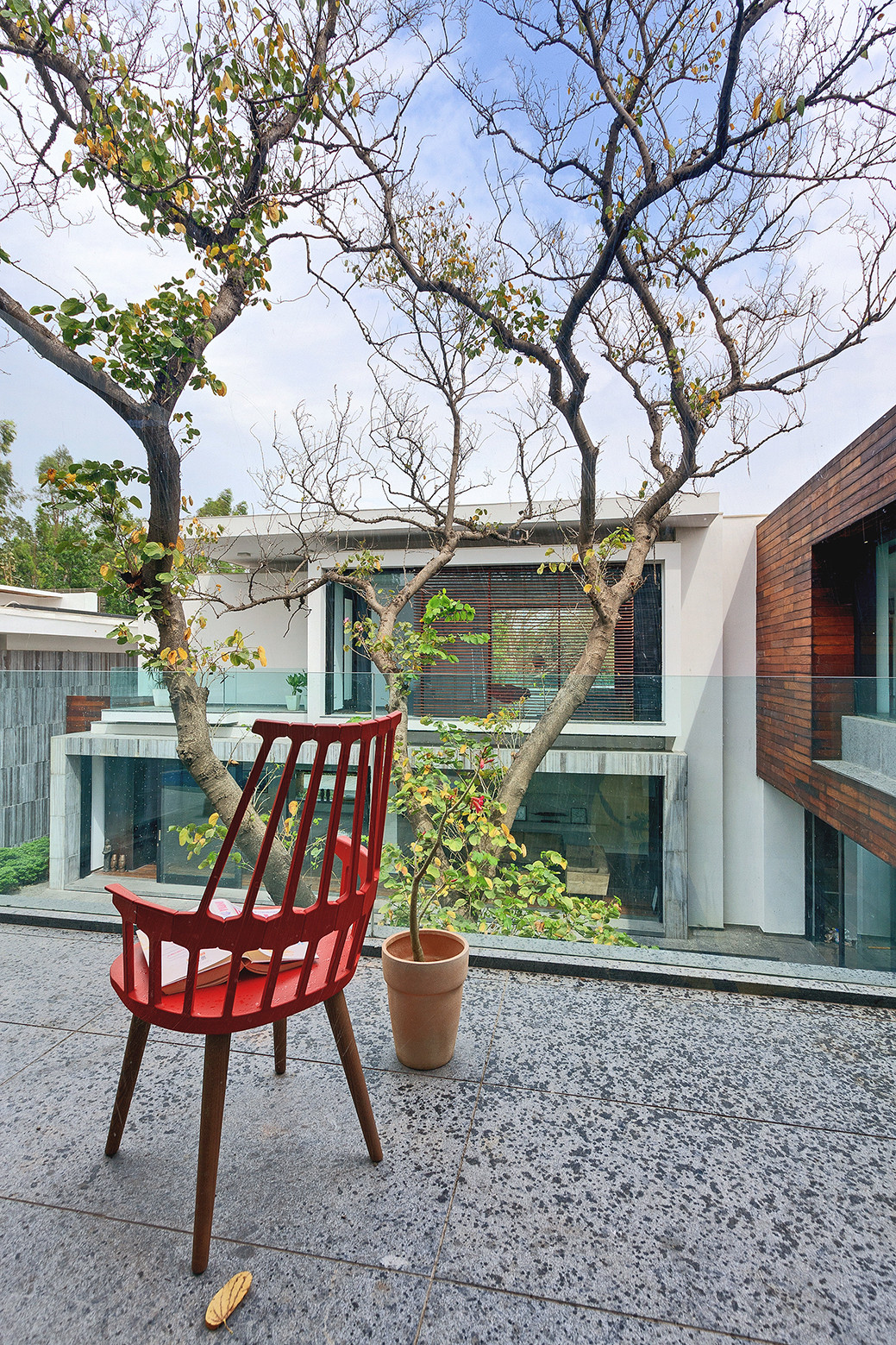 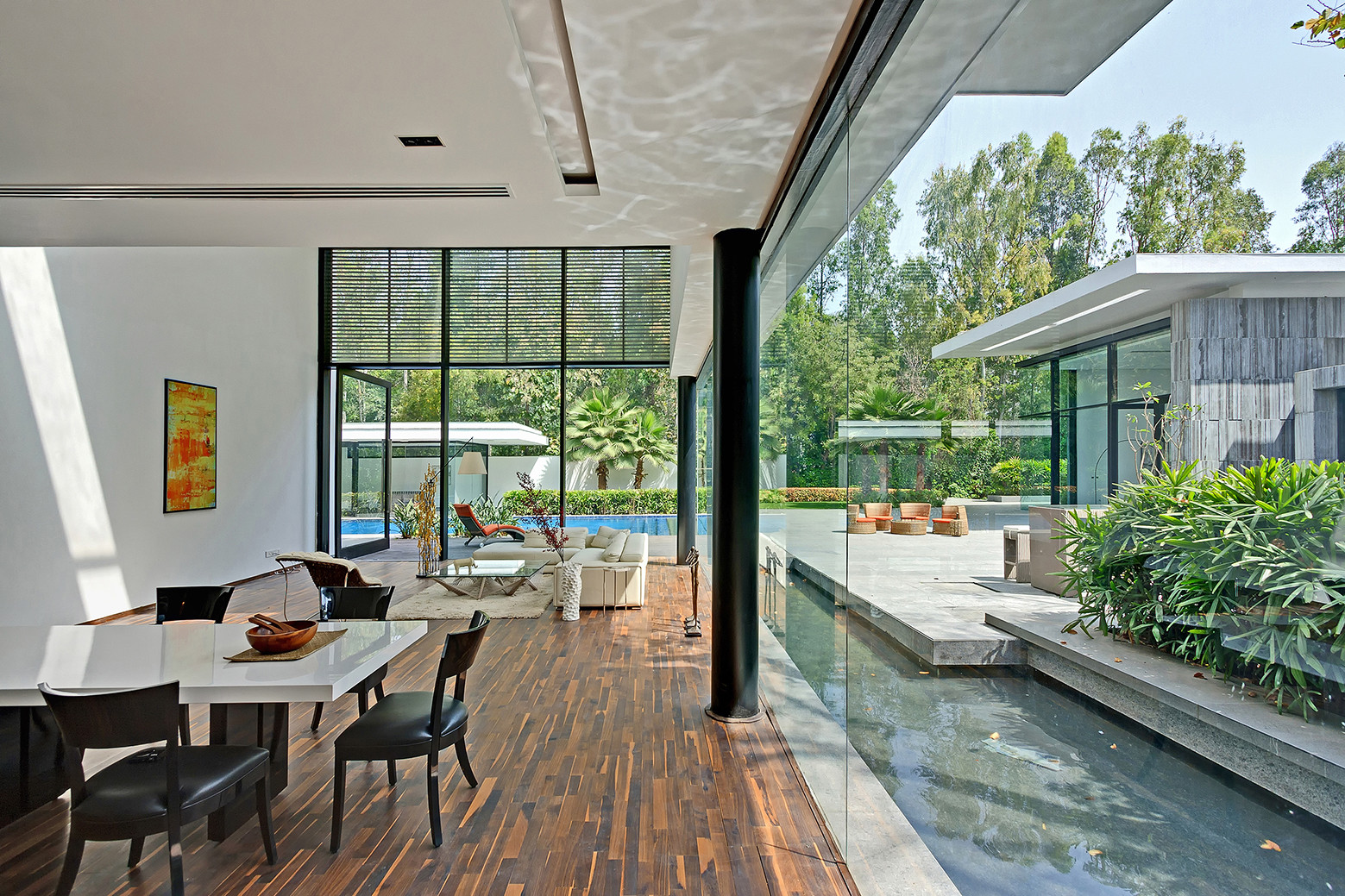 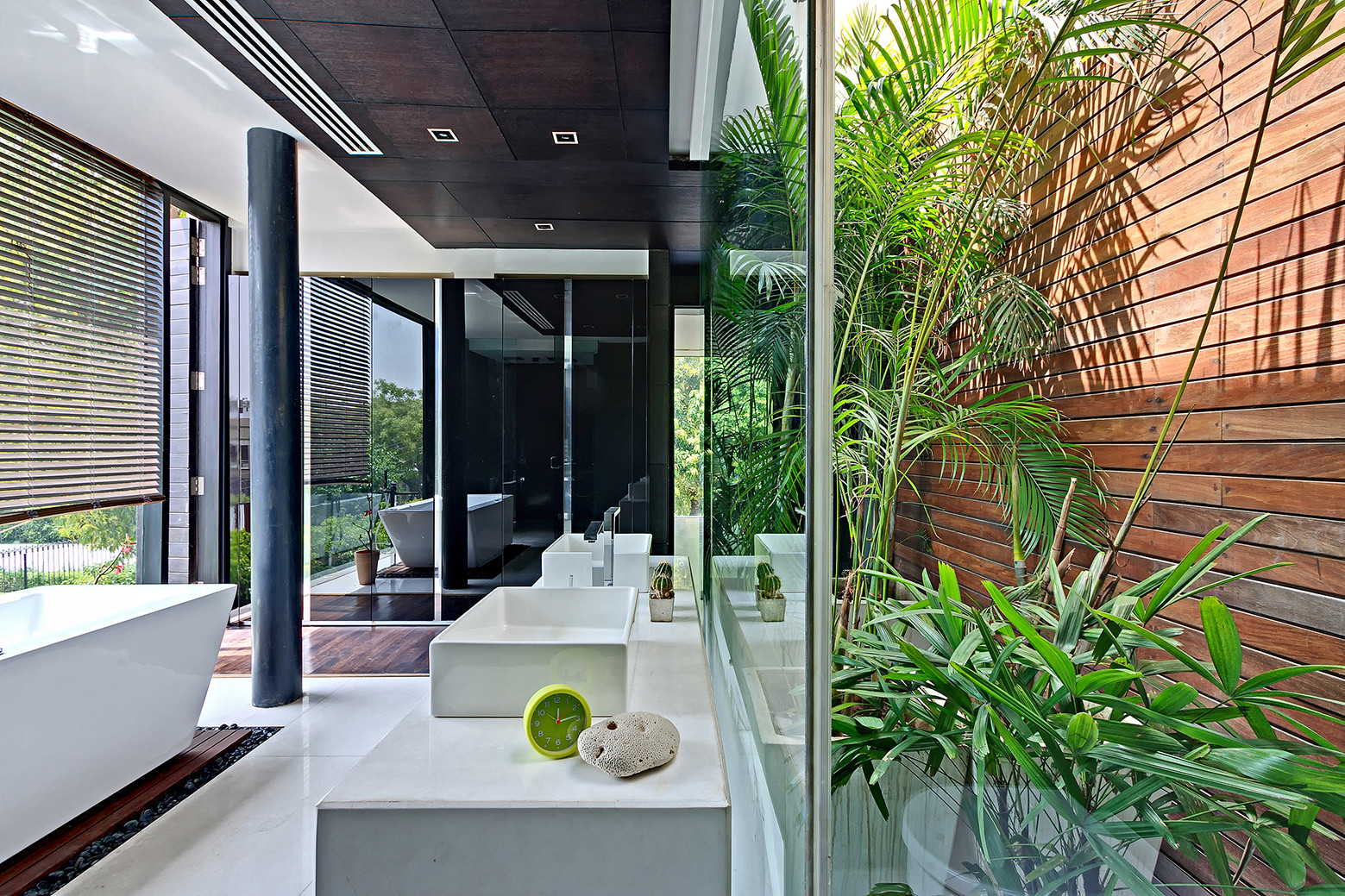 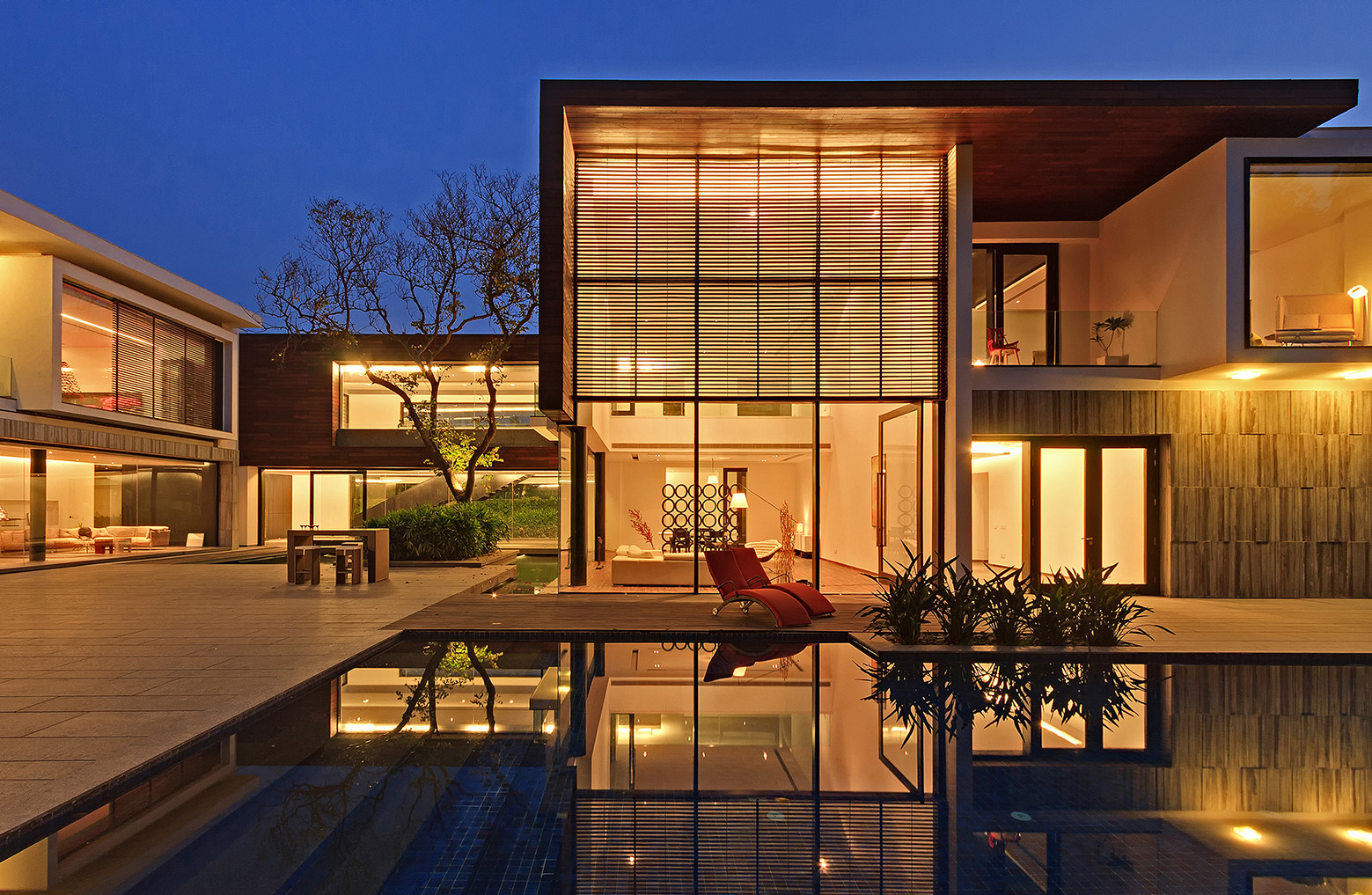 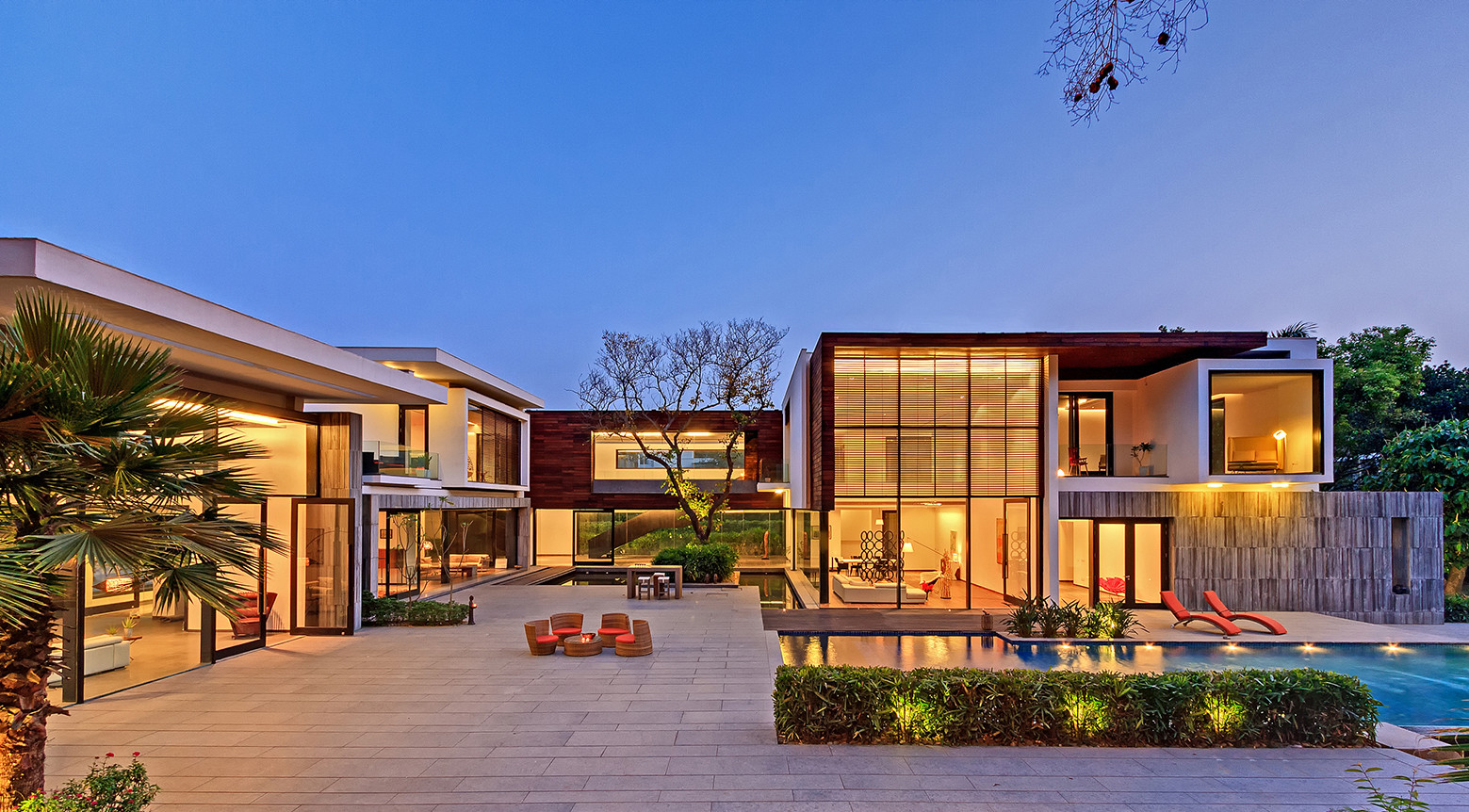