You may remember in our feature on LAF2017, we mentioned coming across submissions for the competition but were unable get much detail. The entries were developed by post graduate architecture students from UNILAG under the supervision of Mr. Ajadi, and won out in two separate categories, namely “Market from waste” and “The Olaiya Project” . Here’s a look at the entries.

In this category, students tasked with designing a market from rubber and plastic waste amongst other low-cost materials. Their submission “SHELTER FROM WASTELANDS” employs a circular economic model that center around re-use and recycling as well as sustainable environmental design elements. The team members for this project include: 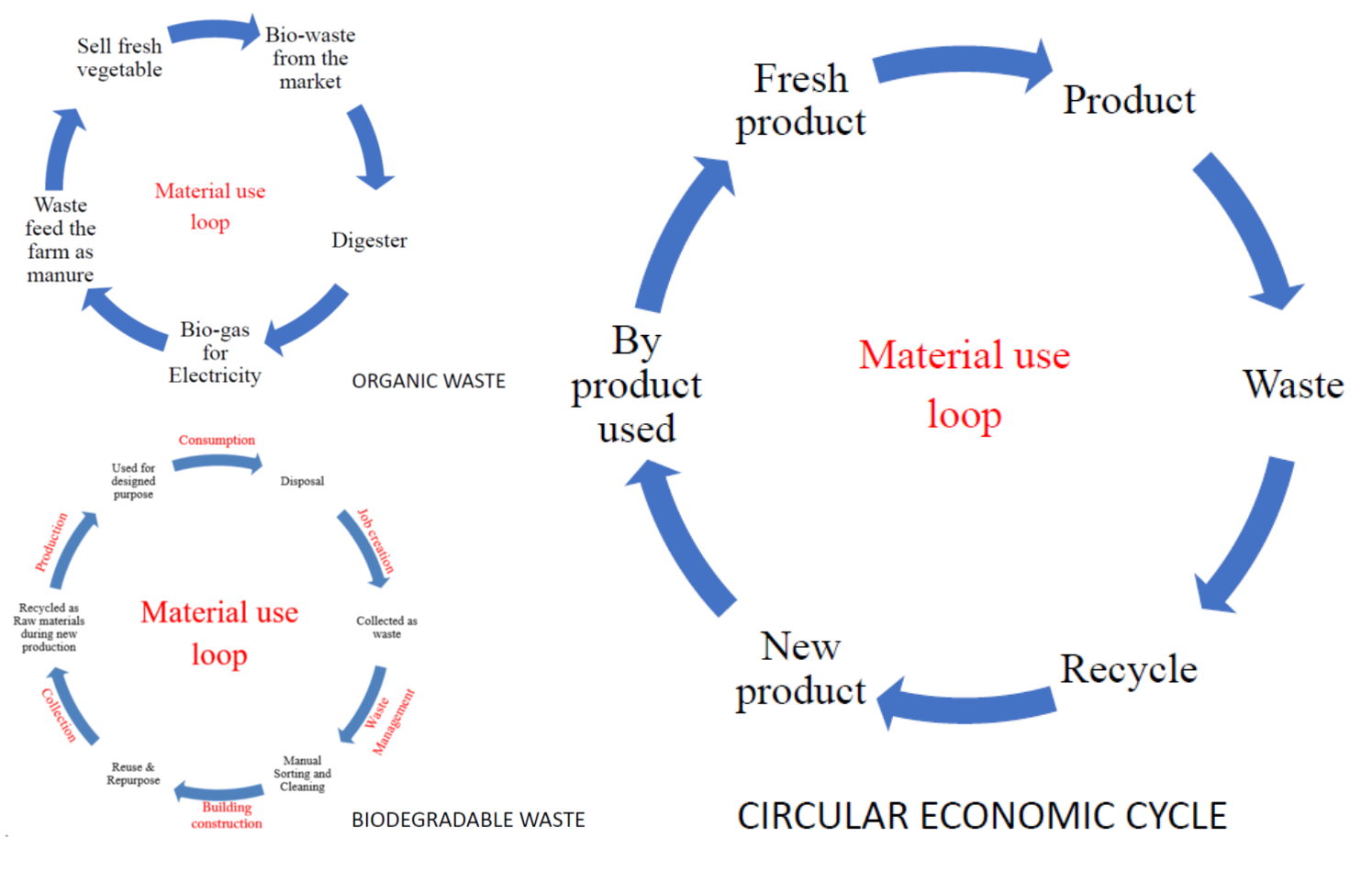 Conserving the environment through resource re-use is one of the greatest challenges of social waste management. Lagos and many major cities in Nigeria are witnessing massive urban migration trends with increasing problems of inadequate housing, infrastructure and services to support the trend. Resulting also is the rise of shanty towns, poverty and squalor. The waste generated, especially in plastic products is alarming and will cause negative short, medium and long term effects in our environment.

The proposed model seeks to repurpose waste while creating awareness and engaging the public on the issue of sanitation, sorting and separation of waste. Some of such repurposing will include:

The site is zoned into four segments, which are laid out based on a grid pattern. They are,

The market also has a muster point, delivery point, bio-gas plant, waste bank and plastic collection point as well as an ATM gallery, restrooms, a farm and rainwater harvesting facilities. 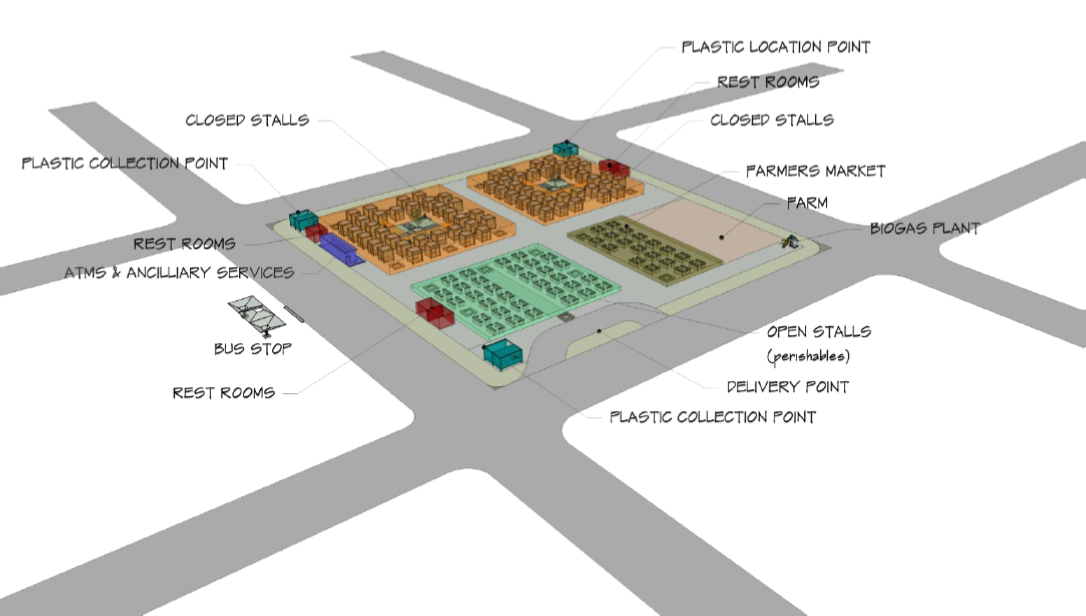 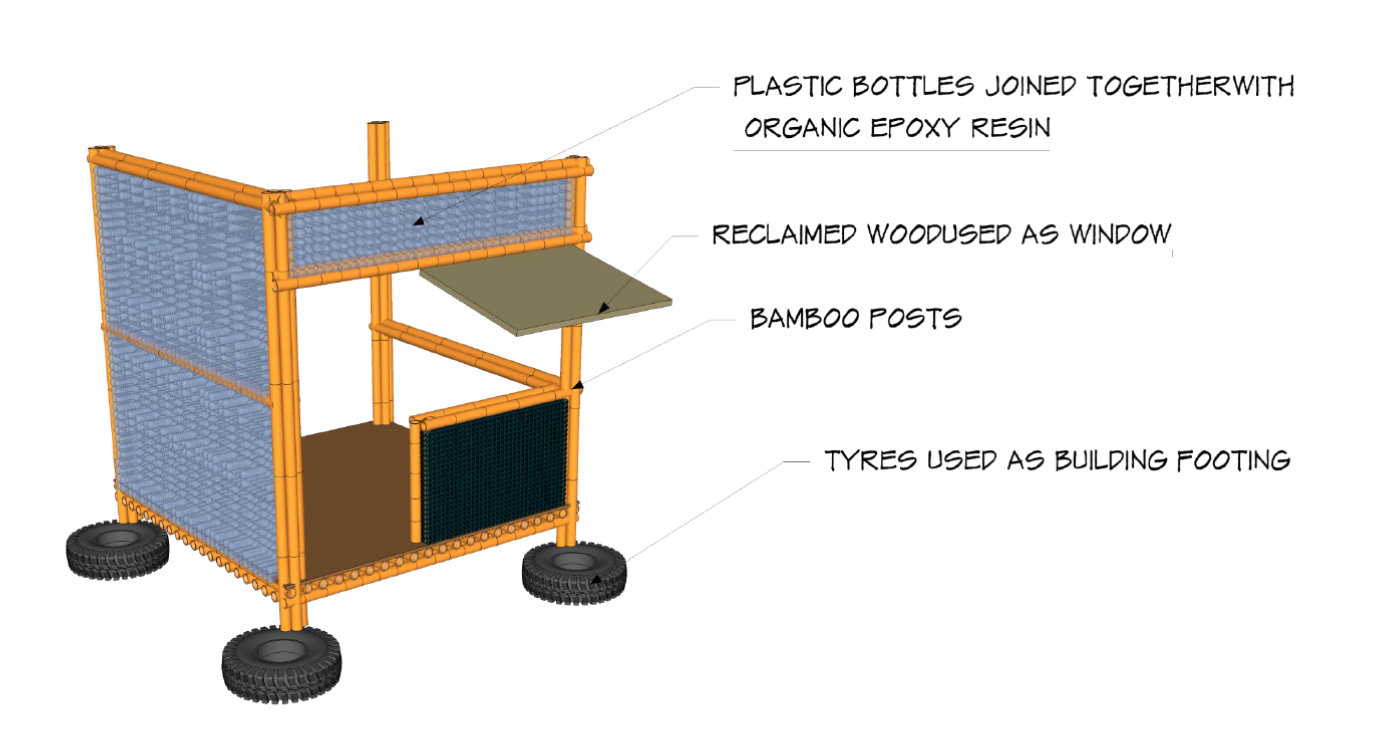 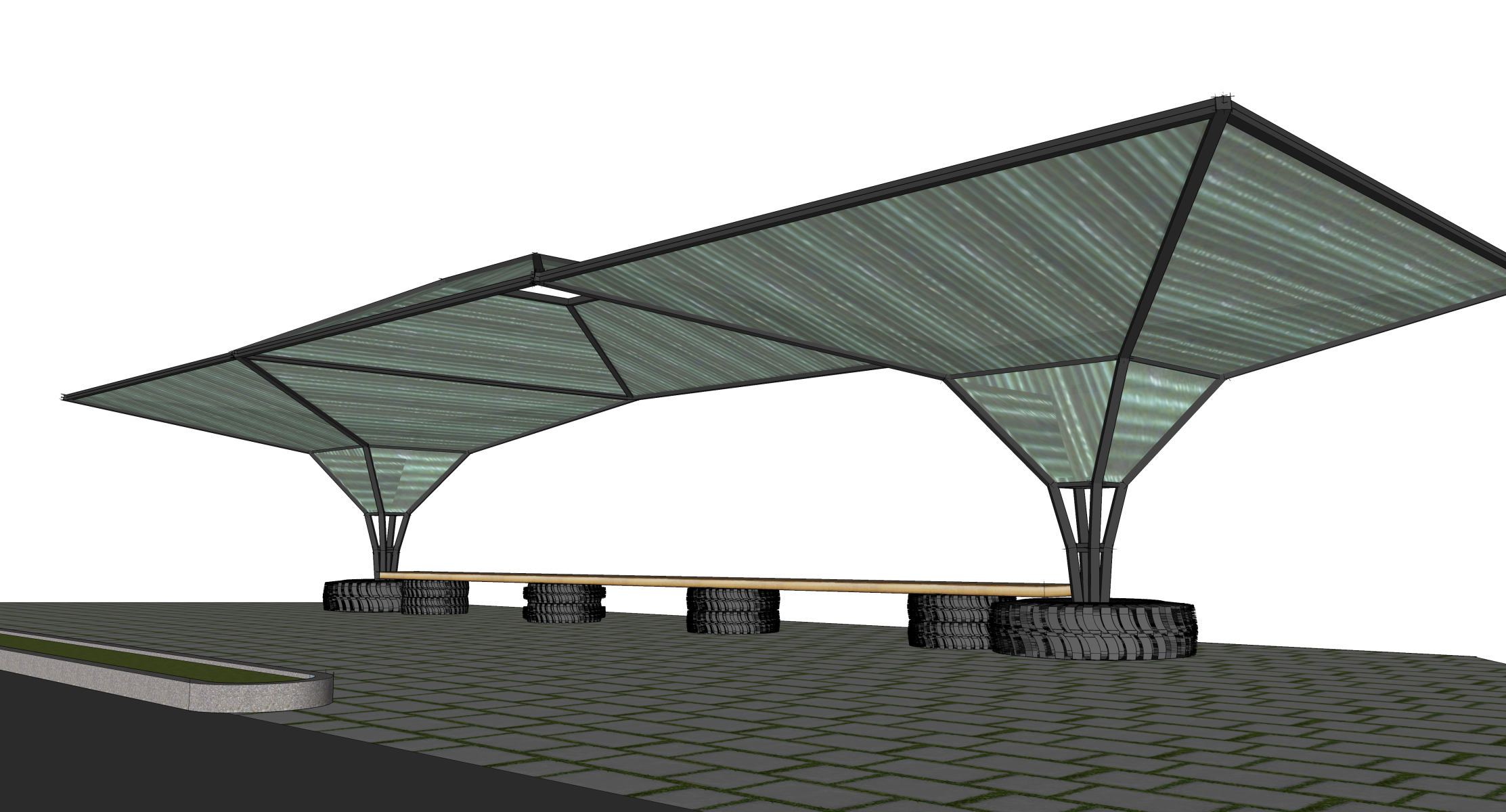 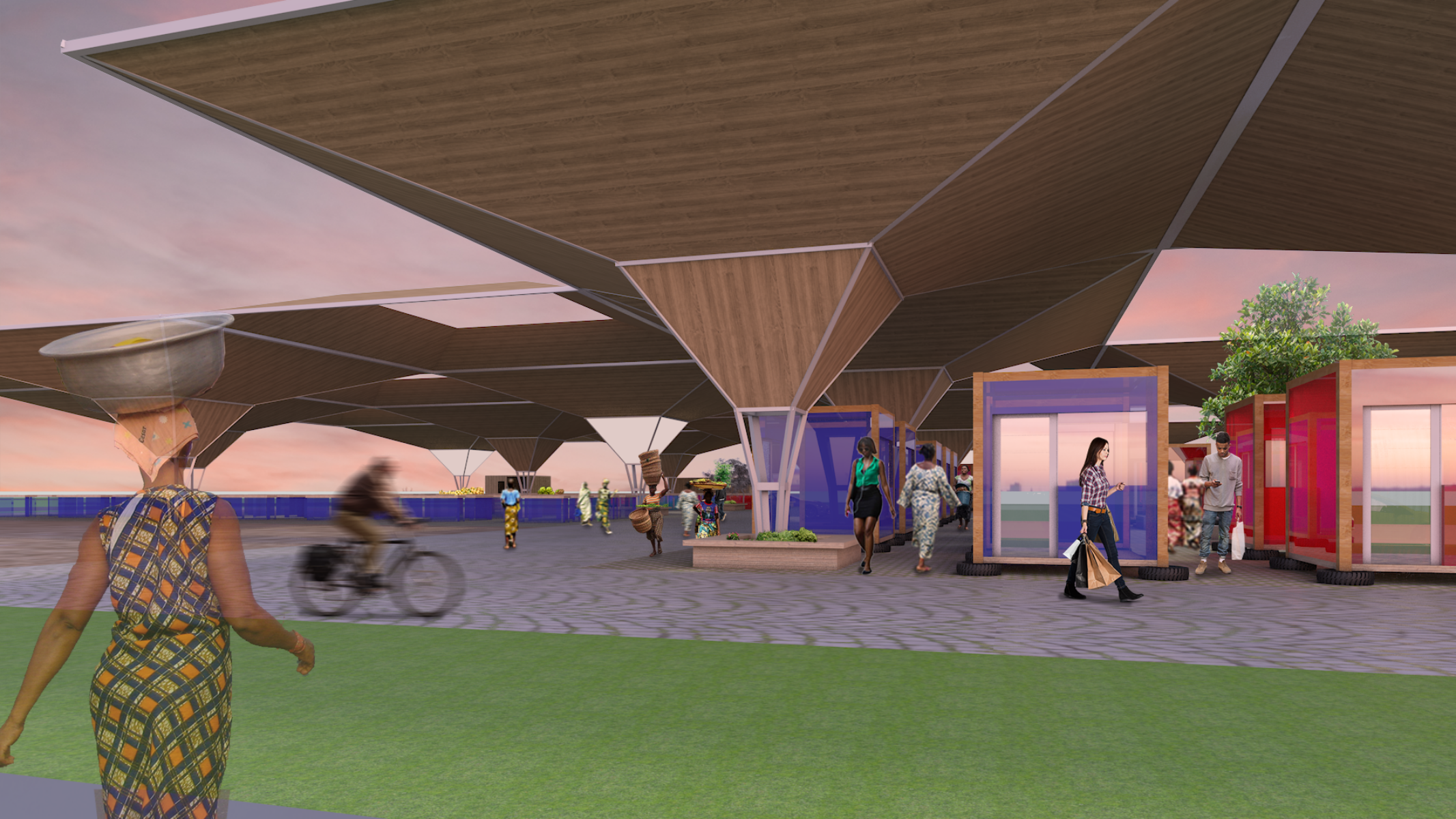 As described, this category sees students “attempting to create a loop between the past, the present and the future, in a utopian dreamscape using the Sankofa which signifies the importance of learning from the past.” Their submission “THE KLEPTOMANIACS UTOPIA” creates a statement that frowns at the demolition of the Olaiya house, which takes away and disconnects the learning process from the past, seeking to show the relevance and importance of how the past influences who we become in the future.

The team members for this project include:

The Olaiya House was built in the decade between 1846 and 1855 by returning slaves, and granted National Monument status in 1956 under the British Colonial Administration. After years of progressive neglect it was demolished on the 10th of September 2016.

According to Alonge(1991), “The original owner was a slave merchant called Fernandez who was of Afro-Brazilian descent. His father was of Portuguese Brazilian descent and a slave merchant himself. His mother was African, The Fernandez House was built to serve both as a residence and as a punishment house for slaves.. The house was a two story building with a roof terrace. There was a backyard that was used for storing slaves to be sold and sometimes they were also locked up in cells and beaten as punishment” (Alonge, 1991).

Olaiya house, however, over the years has connected with Lagosians as a place that determines the quality of life for generations to come. Olaiya house held significance from its initial function as a bar and restaurant (Ilojo bar) a place for the Lagos big shots; to the residence of Olaiya himself a prominent figure in the evolution of the Nigerian Film industry now known as ‘Nollywood’, to the hub for musical instruments where the legendary King Sunny Ade got his guitars from. This house has now been demolished, well almost totally.

The design attempts a rebirth of the demolished building by casing a facade in glass and surrounding it with a hologram of the rest of the building’s exterior. The concept also features public spaces like dance studios, bars, performance rooms on intersecting levels of glass walls and floors suspended by gold scaffolds and accessed via floating stairs along the cased structure. This creates an impression of people walking in the sky above the Olaiya house. 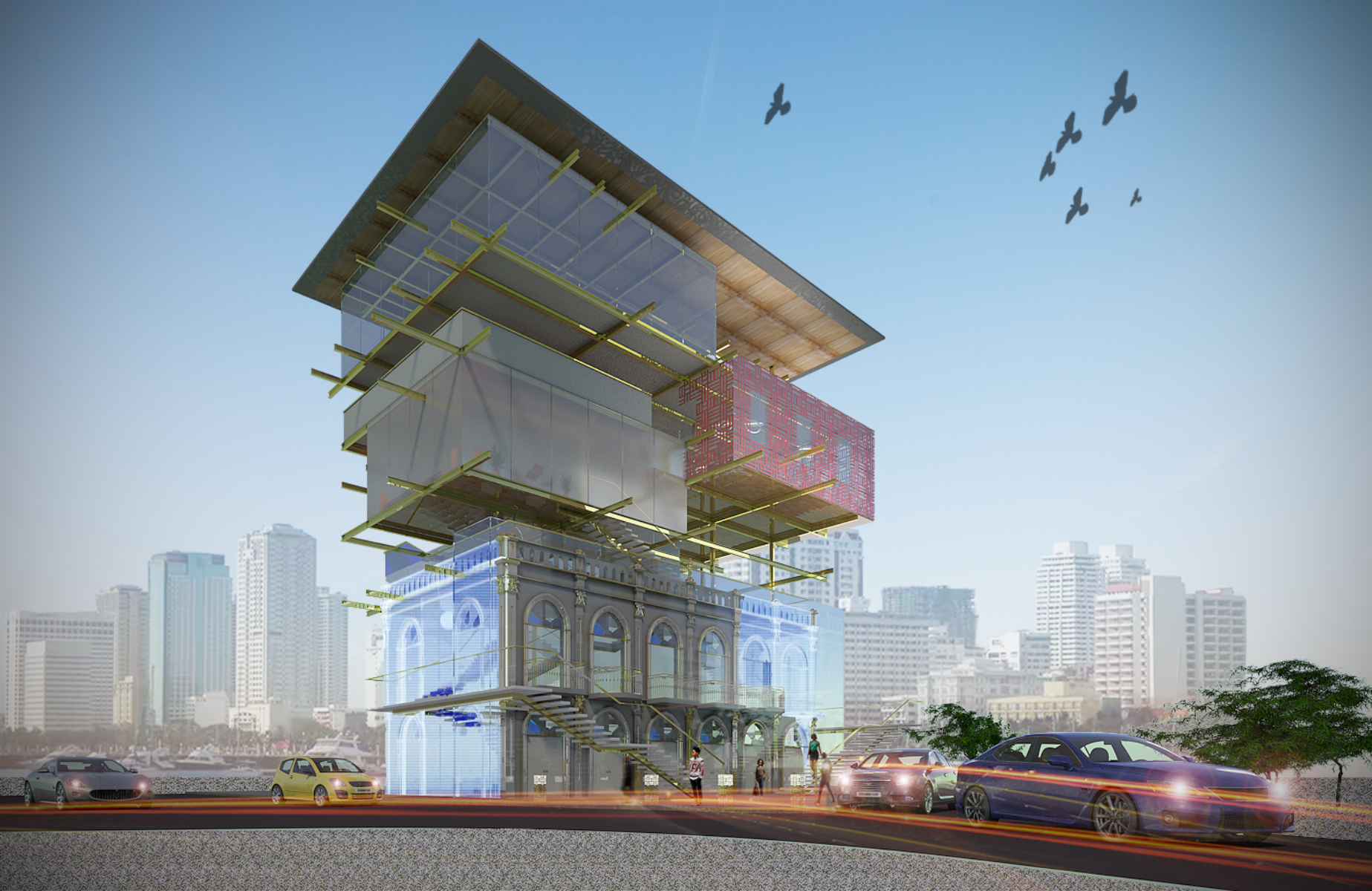 The first level lands on an exhibition floor (Sky deck 1). This space has all glass balusters around the edges and an observation deck on the top of the cased faced where one can actually walk on. The floor houses relics and priceless art that have been collected and preserved over the years, educating them of the history of these relics.
Following the floor is an open space for live performances, music, spoken word poetry, jazz, afro pop. 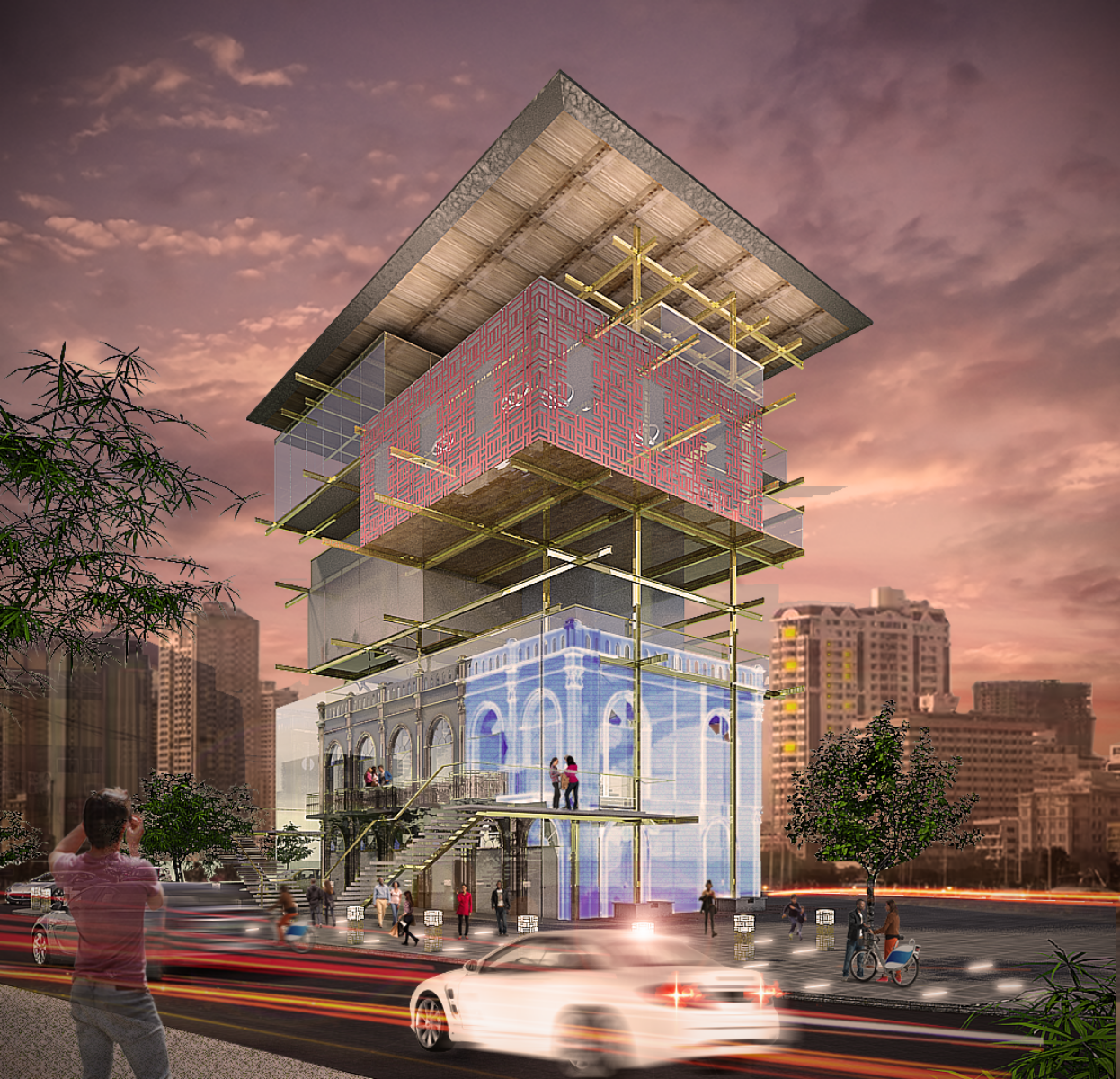 The new bar is opened to the live performance room, to create a continuation of the feeling and separated by a half landing across the space. The bar is a modern form of the Ilojo bar placed at the point of emphasis on the façade with the adrinka symbol meaning ‘Nea Onnim No Sua A, Ohu’ : ‘he who does not know can know from learning’. This creates an atmosphere of information dissemination. The last floor is an open sky deck (Sky deck 2) that leads into the creative art studio. 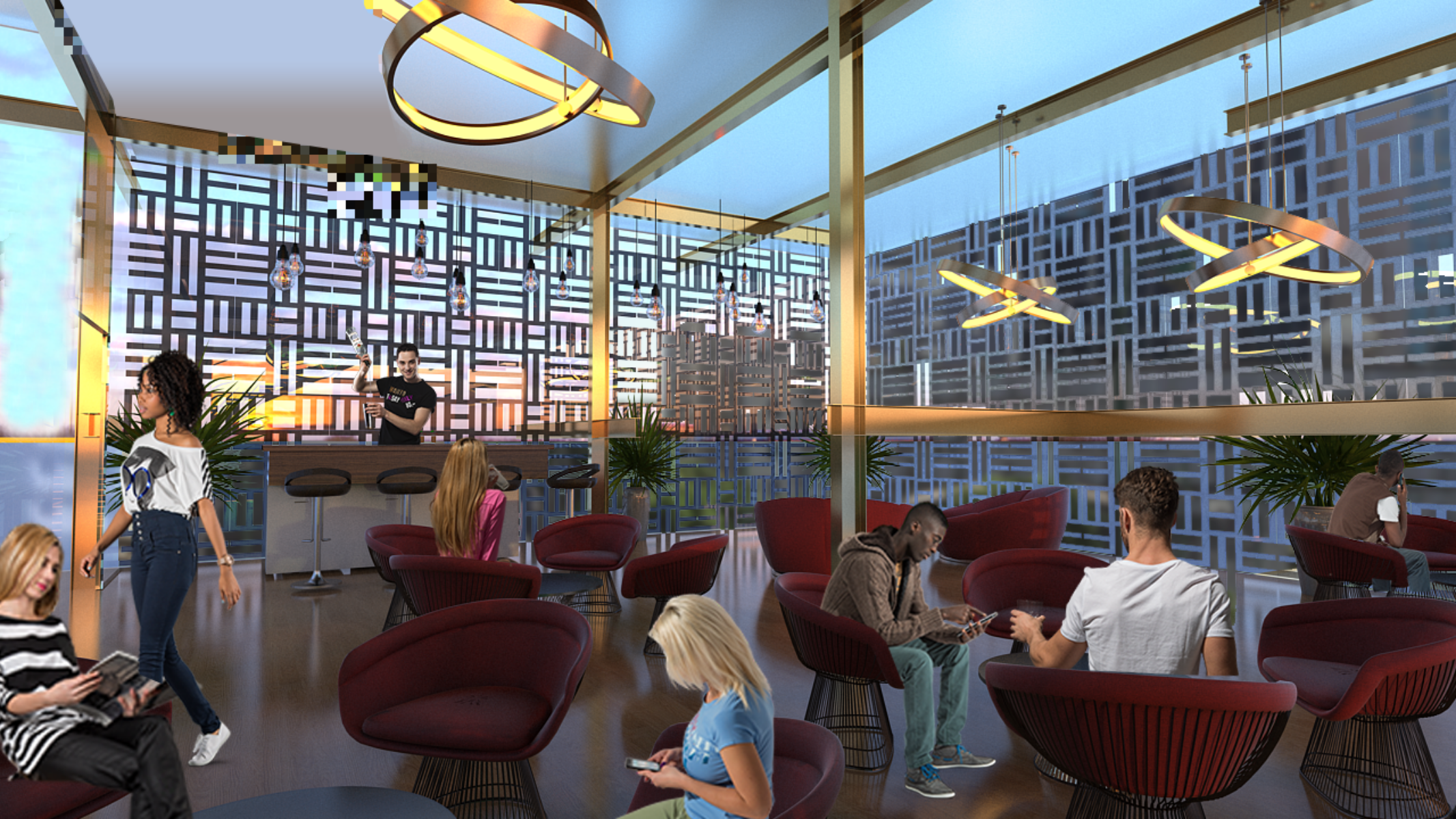 The building is composed of an array of stairs (amongst other things) at varying positions, landing at different level, consciously to impose the movement throughout the space instead of using an elevator.

The wall and floors are composed of triple layered glass panels that insulate the building from the heat of the sun. A central HVAC duct runs through the building supplying cool air at every floor with distribution ducts. Timber floors are introduced at the bar and the performing arts room for sound insulation and heat radiation reduction. For safety, an emergency stair that connects all floors run to the ground floor at the back of the building leading outside the site.

The large mass on the Olaiya site shows that our future is bigger than our expectations, we are great and we can be even greater if we work together and learn from the past in other to make the future better.

Next
Alexander Academy of Arts, Design and Alternative Methods: A Case for Sustainable Local Materials