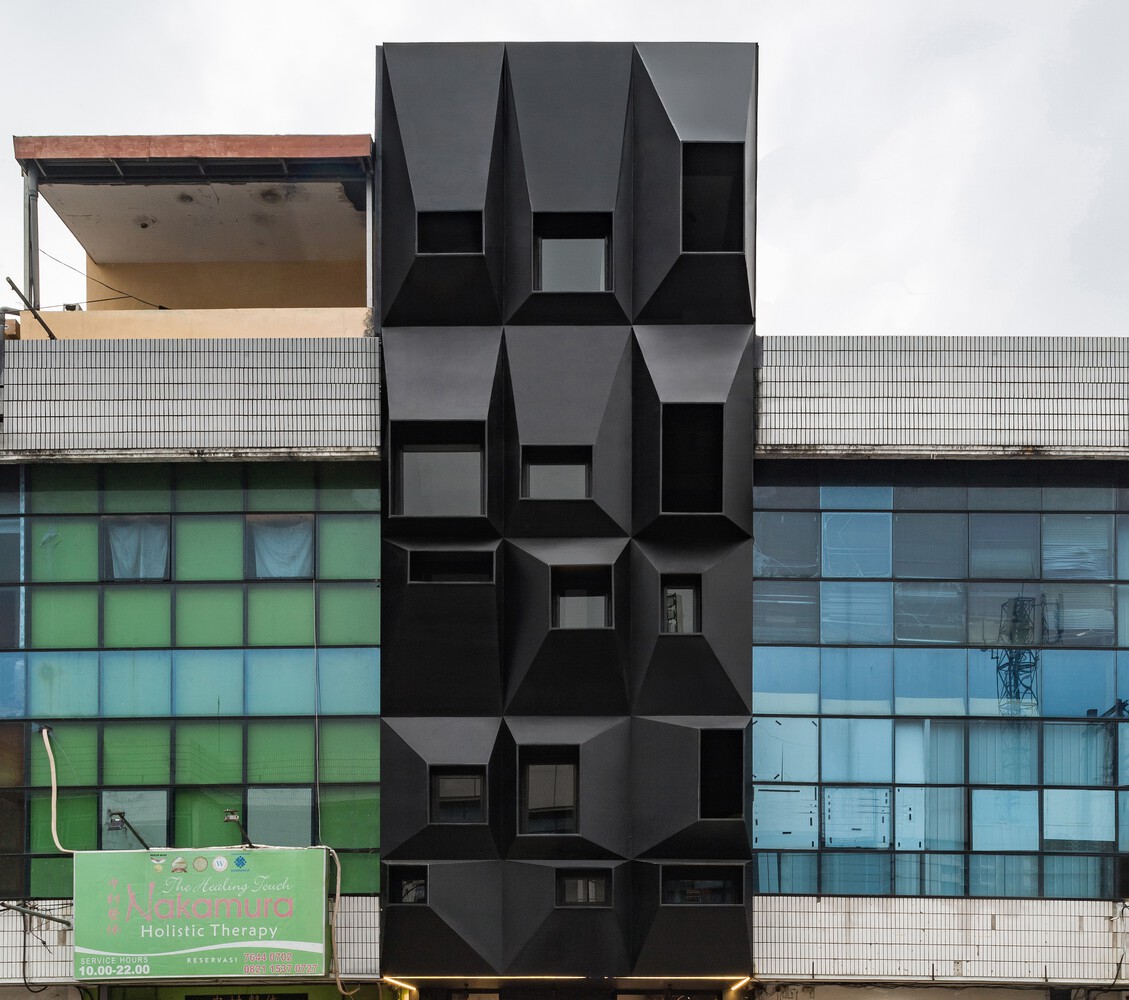 Qub Rooms is a 10-room hotel located in a dense commercial strip in the center of Semarang, Indonesia. Once a mundane 3-story shophouse, the building was transformed into an industrial yet chic structure creating an unexpected sight among the 90’s white ceramic tiles and blue glass facades.

Fitting within the urban fabric of the city, the qub(ic) shaped openings articulated across the black steel facade in varied sizes are meant to blur the visual understanding of the real floor levels behind the facade thus heightening the scale of the building.

The existing structures were reutilized as much as possible to sustainably reuse the building while adapting it to a new function. The old drywall ceilings, walls, and existing staircases were all stripped off from the building to maximize the usable space for the hotel. The interior design of the hotel is a play of monotone new elements such as curved white exterior walls of the rooms and rough black brick walls as the backdrop of each hotel room. They are juxtaposed with the rawness of exposed concrete ceiling deck that is adorned with a network of electrical conduits playfully running across the rooms and corridors of the hotel.

Sleek lines of steel bar lighting were added in the design of the lobby, the hotel rooms, and the corridor to create a sense of finesse and sophistication of the hotel. The stairs were fully made out of perforated steel plates so it allows air to go through the void. Movement up and down the stairs can be seen through its transparency which further makes the public space more active and dynamic. The corridors of the hotel are also allowed to breathe, which is made possible by the use of louver windows at the front and back of the hotel thus allowing cross ventilation throughout the building.

Behind the louver windows at the back, lust tropical greeneries are planted to reduce the effect of air and noise pollution in the city as well as to reduce heat gain while creating fresh air into the hotel. Qub Rooms challenges the typology of common 3-story shophouses that are found in many corners in the city of Semarang. Within the typical width and height constraint, a transformation of function is able to form a much more interesting articulation of commercial facade utilizing specific material and architectural form while enriching the urban experience.