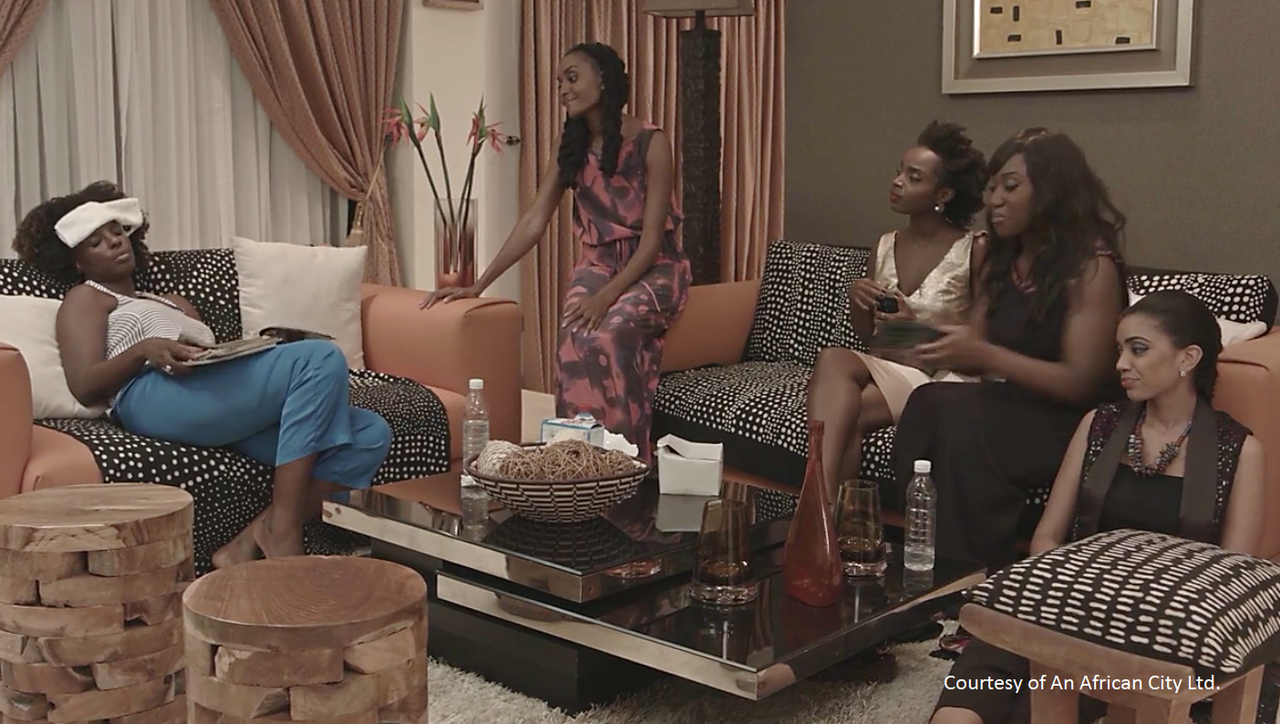 Step Inside the Set of the Hit TV Show, ‘An African City’, Designed by Blueprint Africa

Designing the set for Season 2 of critically acclaimed TV series, An African City, was both an exciting and daunting experience for Set Designer and Interior Stylist, Nana Spio Garbrah.

“The expectations were so high!” she recalls.  With a span of two years between the release of the first and second season, to say the show was highly anticipated would be an understatement.  Creator Nicole Amarteifio called on Nana’s company, Blueprint Africa to work with DAAR Living to complement the modern Accra setting of the show with stunning African-inspired interiors.  For a story of five successful, beautiful women who return to Ghana after years of living abroad, Nana’s first question was, how does a returnee live?

“To start I studied Season 1 and went over the script of Season 2 line-by-line taking notes of all set related needs mentioned or inferred.  I was in shock when I saw my name in the script.  Nicole named one of the minor characters after me.  It was such an unexpected gesture – like a little secret between girlfriends.” For the spaces of the five female leads, Nana’s aim was to balance luxury with the mundane. “First, I wanted to give each character a unique interpretation of modern African design.  Secondly, I wanted to avoid having any of them come off as too highbrow.”  As such, Nana’s visual storyboard for Nana Yaa, Sade, Ngozi, Makena and Zainab began with trying to understand each character’s distinct temperament and lifestyle.

Local real estate developers Clifton Homes and others provided show houses for the design team.  The team worked in both a three story, 3-bedroom townhouse in the East Legon neighborhood of Accra, as well as a two story flat in the Airport Residential area.  The latter served as home to the show’s protagonist, played by actress MaameYaa Boafo. “The design team was lucky in that respect.  The apartments had modern finishes and large-scale furniture already in place, which made sourcing easier.  Open space layouts meant we could execute different interiors within the same space without hassle. In fact, the open floor plans inadvertently reflected what I believe to be the spirit of the show, that is, that Western and African [design] can merge flawlessly.”

Working on location as opposed to a built set had its advantages but also required some out of the box thinking.  “I struggled with the news that I would not be able to touch the walls at all.  I love a good wallpaper or bold paint color! We opted instead to focus on sourcing large colorful art that we could prop on furniture.  It all turned out perfectly.”

Joining the design team three months before shooting began made cost and time efficiency very important to Nana’s décor sourcing strategy.  As a result, a good number of Blueprint Africa’s accessories on the show came directly from her.  The others she sourced in bulk.  “I sourced pure brass statuettes from artist Kukua Ampaw of Joe’s Perspective Art Boutique for both Sade and Ngozi.  Both characters exude a strong femininity, just like the statue, albeit at opposite sides of the personality spectrum.  Sourcing in bulk and using similar pieces in different sets was practical and still hit the mark.”

Nana still remembers the experience fondly.  Although the design team sometimes set up before 8AM, remained present throughout all the scenes scheduled for the day and strike down the set once shooting wrapped in the evening, she still calls it some of the best fun she has had in a long time.  “On set, I did not feel there were any egos.  We all got along, joked, blushed during some of Sade’s scenes….You just roll up your sleeves and do whatever is necessary. I had a good time!”

Makena lives with her aunt and uncle and so she spends a lot of time at the house of her boyfriend Stephan played by actor Jeff Spain on the show.  The chair featured in his living room is over 20 years old and hand-carved from an artisan in Bassam, Cote d’Ivoire.  We used upholstered cushions to soften the masculine feel.  His bedroom features a texturized self-portrait of artist Ato Ribeiro.

The team was lucky with the set locations.  Zainab’s living room is open space – a trend finally taking hold in the residential market in Accra.  It was important to the producers that Zainab’s house reflect her work with artisans so the final mood board called for traditional African color palettes and wood carved furniture.  Zainab’s space also feeds into the storyline. She needed a neutral oasis to decompress from the travails of fighting the dumsor wars! Her living room features a carved floor lamp from Happy Art Academy located in West Legon, Accra and her Madiba pillow from Episode 4 was sourced from a textile company Kerry Cherry Design and Prints, available on Etsy.com and Ezebee.com and based in in South Africa.

Because Nana Yaa is a radio VJ, I considered her to be by default into the arts so the concept brief for her living room featured bold saturated and contrasting color.  However, as the narrator of the show, she bares her soul and is very introspective so I think it was apt that her bedroom is kept relatively sparse to reflect that sentiment.

Sade being Sade, the bedroom had to be glam.  The original brief called for metals and mirrors, but we cut down costs by introducing this imagery with color – golds and yellows.  This turned out to be a smart move since it is easier to shoot with non-reflective surfaces.  We did bring some bling with a DAAR Living sequined mustard throw over her headboard!

“I hope that viewers see themselves in all the spaces I design whether they live in Banjul or Bangkok!  If my interiors are aspirational to others, then my work is done.”

Follow Blueprint Africa for more insider scoop and subscribe to Season 2 of An African City or on Ebony Life TV!

[All images courtesy of An African City Ltd and Daar Living. ]

Next
The Falomo Collection by Eva Sonaike