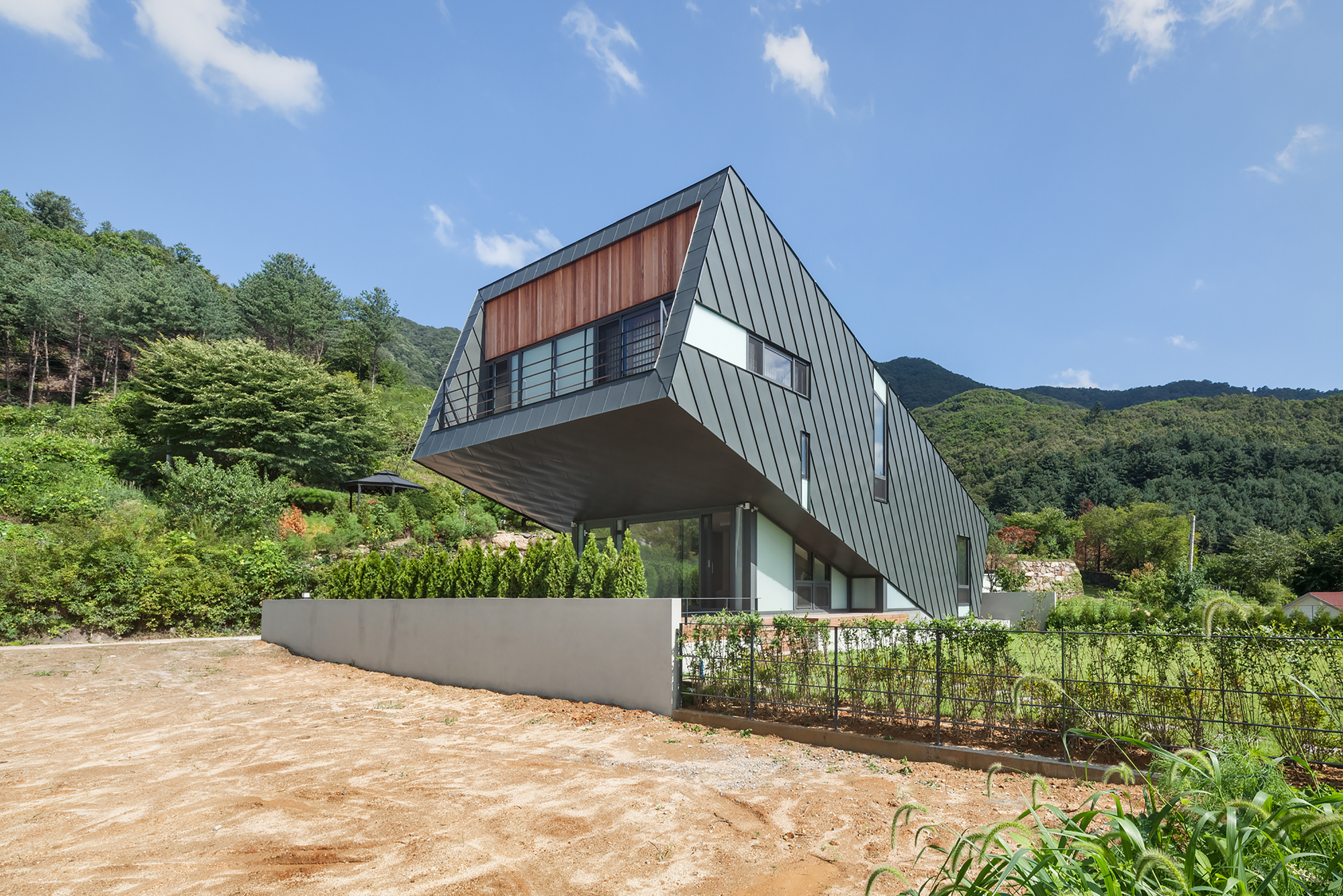 Lean on me: Leaning house in South Korea by PRAUD

Convention is getting less and less attractive. That must have been the mindset of the architects at PRAUD when they chose to make their house Lean as opposed to the norm of an upright structure.

Located in a hilly region of South Korea, close to the Chungpyong Lake, the house sits on a challenging site with regard to its surrounding topography and orientation. As such, the architects first had to solve the positioning of the house to get optimal comfort. To this end, the house receives southern sunlight with views of the lake while the house is oriented to the East following the site’s topography. The basic idea or concept of the house, was to lift a typical box at an angle creating space underneath to add to the volume of the box and provide more value and amenity.

The resultant shape and idea not only forms the geometric mass of the building, but, acts also as the structural system, employing a frame structure around the box which supported vertically by columns that envelope the aforementioned space underneath. As a result there are no redundant structural elements.
The entirety of the idea for the building stems from an architectural vocabulary that PRAUD has been developing called “Topology&Typology”. In a nutshell, this ‘vocabulary’, seeks to find harmony between the architectural form and the system/ architectural language of the time.

Now the Design. The idea to lift the proverbial ‘box’ as shown above is the linch pin in this design. It is from this point that the home is able to lean and at the same time gain a significant amount of space underneath the higher part of the leaning ‘box’. It forms a large shaded family terrace that would probably serve multiple functions aside from being the main entrance into the building.
Surprisingly, the interior spaces are not wildly sized and some may even cite them as small, but, I’d call them cute and appropriate for a single room home. Could more rooms have been included, quite possibly, but the client requirements probably didn’t exceed the one. So, on the ground floor, one fairly large space is ‘partitioned’ into Living, Dining, Kitchen and W/C with a staircase along the boundary wall, that takes you to a reading loft, with a nice open feel extending to the floor below. This first floor features only the reading loft and a slightly narrow master suite with the prominent balcony.

I somehow wish, there was more to the interior, in terms of spaces and design but, a minimalist approach seemed to suffice. Clean wood floors and accents along with white walls and ceilings make for a simple space but, this is made up for on the exterior.
With Texture and pattern, the exterior materials and treatment, lends itself to the concept of the building. The ‘box’ is wrapped in Zinc, and NO! not the type we use in Nigeria to cordon off ‘top secret’ building sites, but a Zinc cladding material that serves as  roof, siding and exterior ceiling. Its continuous diagonal ribbing adds a certain texture to the inclined ‘box’, emphasizing the angularity of it all. The supporting structure of this inclined box is basically clad with a curtain system of glass panels, giving it the name ‘glass box’. This offers a simple yet striking facade that doesn’t try to hard to stand out but  ultimately does, in a good way.

Construction on the Leaning House, finished late August 2014 with the owners since moved in. Here are some images of how it got started, how it got its lean, and whole lot of steel reinforcements awaiting their concrete concubine. Really cool and informative.

If you’d like to learn more and see more images about the construction of the Leaning House, check out PRAUD’s Blog