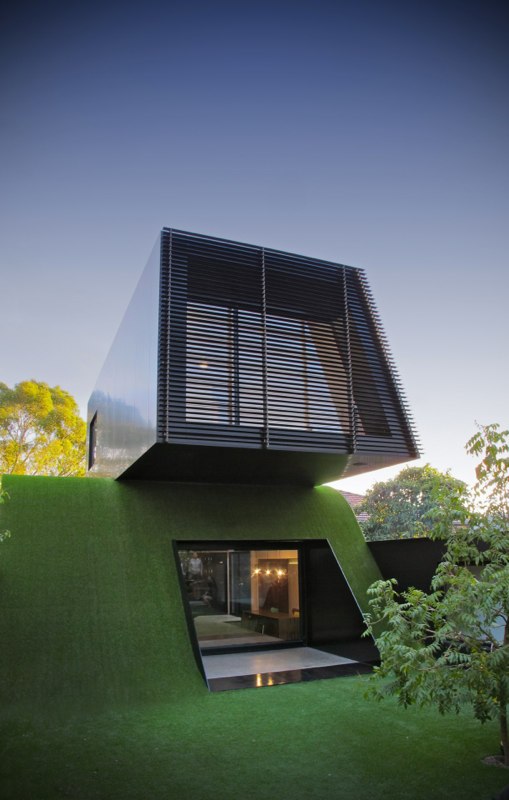 House on a Hill: Hill House by Andrew Maynard Architects

I like to keep my introductions original, but, in this case I’ll make an exception. This is an introduction to the synopsis of the Hill House in Melbourne, Australia designed by Andrew Maynard Architects, that really just gives you an idea of their approach in tackling this project.

Design is complex. There is little that is more complex to design than a home, however fundamental issues offer an architect a starting point; where is the sun? How do we capture it in winter, how do we exclude it in summer? The thin allotments that dominate Melbourne’s northern suburbs often provide indomitable constraints to solar access and therefore require the production of unorthodox ideas to overcome these constraints and convert them into opportunities.

Converting constraints into opportunities, is probably the singular thing that separates the successful from the unsuccessful. Seeing the possibilities amidst the seemingly impossible. A narrow north facing site, (in a dense suburban area) with a backyard perpetually in shade all year round could seem nice until you build a two storey home which in turn creates deep dark spaces within the house due to a lack of solar access. This was the challenge.

The family of five the owned the home wanted to create something long term that could cater to their children as they grow and mature into adulthood. So rather than  extending further from the rear, the architects built a totally new structure that not only has access to the sun but also responds to it accordingly, in both the summer and the winter.The result was a cantilevered volume atop a sloped core (the hill) that used to be the backyard. The greened slope is a particularly good idea as it keeps the essence of vegetated backyard alive while still provided the needed space and function of an additional structure. So you still technically have a backyard, it just doubles as an extension to your home in a truly ingenious fashion.

‘Borrowing’ landscaping from the neighbours creates a sense that the Hill house is enveloped in trees and greenery as opposed to the reality of its more suburban setting. The ‘old’ house is connected to the ‘new’ Hill house via a long, meter wide corridor (which also doubles as a fence) offering views of green space between the 2 houses via a large sliding window. Its a marvelous testament to intentional and creative, problem solving design that takes an unorthodox approach to create something, both functional and beautiful.

Previous
An Elegant Bow: The Dubai Opera House by Atkins is Inspired by the Traditional Wooden Dhow

Next
Interlocked: The CHEFT collection by Studio Pousti