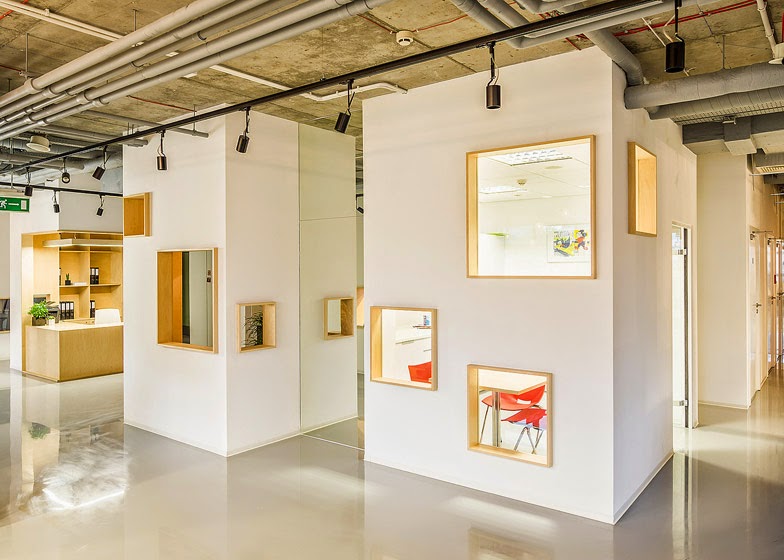 A Little Town in an Office ~ Alternative Office design by MFRMGR Design Studio.

Livin Spaces·Oct 17 2014·0
Warsaw based Design Studio MFRMGR took an alternative route to redesign the 400-square-metre office space of Warsaw-based IT company Decerto. According to MFRMGR, they sought to create an original and non-cliche space from the onset, citing that;

“In the building, all the offices looked the same, with their boring expression and sad, dark, low rooms. All designed in the same manner, using the same materials – repetitive solutions that did not take users into consideration, rendering them bored and uncreative”

Working in collaboration with  Pamela Krzyszczak, they took inspiration from the character of a town, comprising of individual houses and buildings with streets and paths seperating them. This inspiration was translated into the office space by sectioning it to create individual workspaces for employees using “wooden cabins designed to look like a mini-town”. Their goal was to create a more homely atmosphere for the staff that will enhance productivity.

The typical work cubicles, translated into these “wooden-lined booths” looked like mini houses with flat roofs. They were plastered and painted on their exterior to resemble the finished walls of a house.  The walls were cut through with plywood-framed windows creating the illusion of more openness within the office while it allows communication with passers-by. 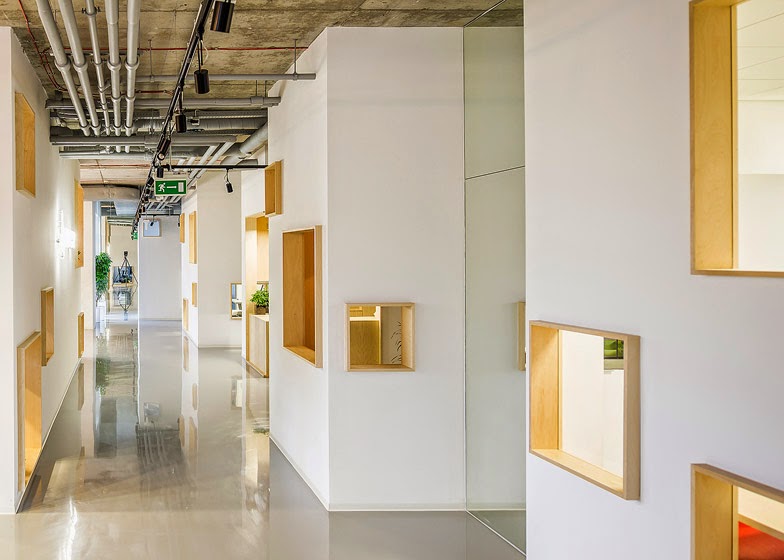 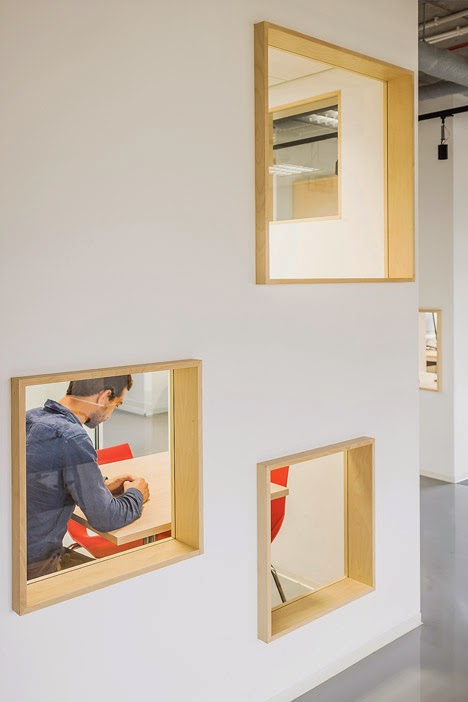 In a short time the staff started putting their personal items, books, and flowers on the window sill which was not originally part of the initial idea, though a very welcomed one. According to MFRMGR,  “by putting their belongings in these places, the users of particular spaces provide a specific character to each of the rooms, just as residents adjust the appearance of windows in their homes by hanging curtains and placing plants and flowers on the windowsill or hanging laundry to dry”. This definitely showed their inspiration and goals were successful. 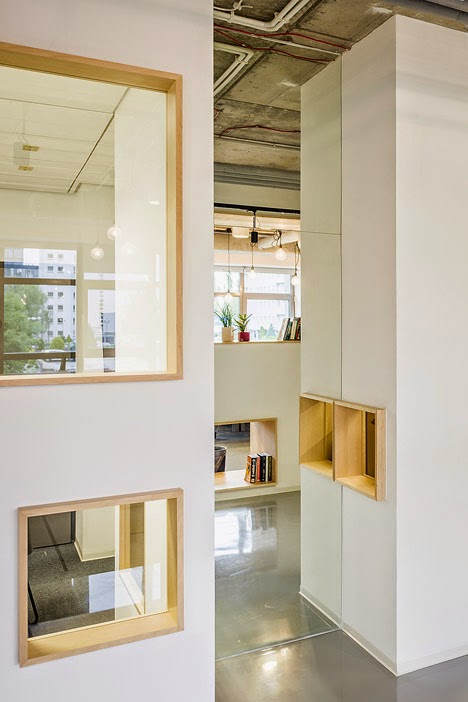 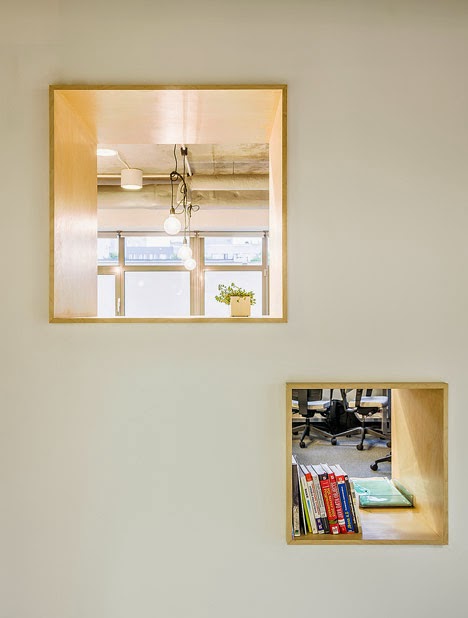 Mirror walls were inserted between the offices to “give the vision of a larger space”. The mirrors were deliberately distributed in specific areas that gave the illusion of streets flowing between houses, thus, successfully crafting a “mini-town” within the office. They combined grey carpet on the floors with light coloured plywood walls inside each office. The result was a soft, warm and friendly space with built in closets and shelves for office storage. 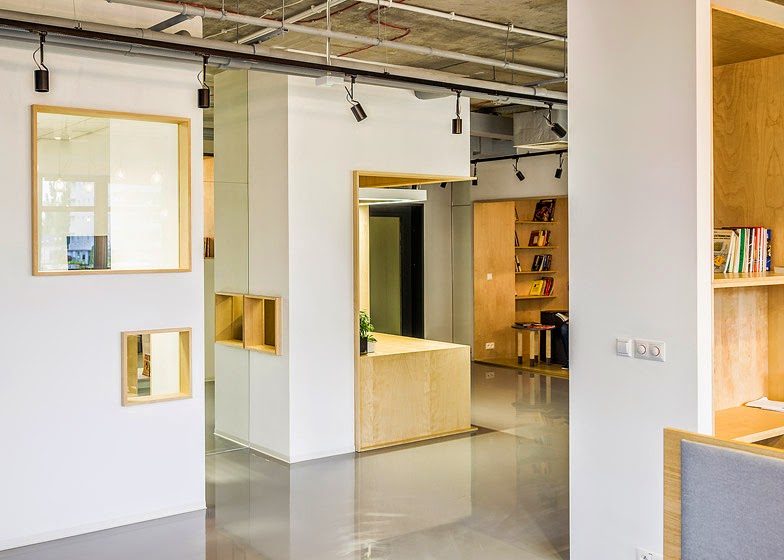 They used simple pendant lightings hanging from the black electrical cable to light up the space.
The suspended ceiling was removed from the hallway and conference rooms exposing the concrete ceiling, cables and pipes creating a strong modern industrial look in combination with its grey resin floors. Opposite an “open-fronted reception cubicle”, they created a waiting area for clients off the Hallway in a wood finished alcove. 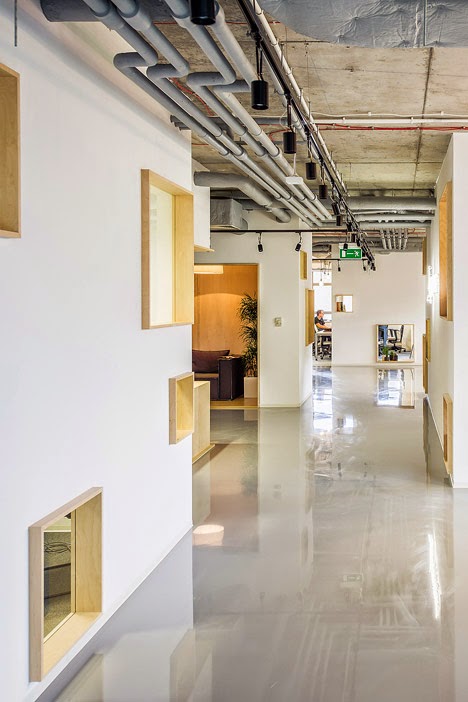 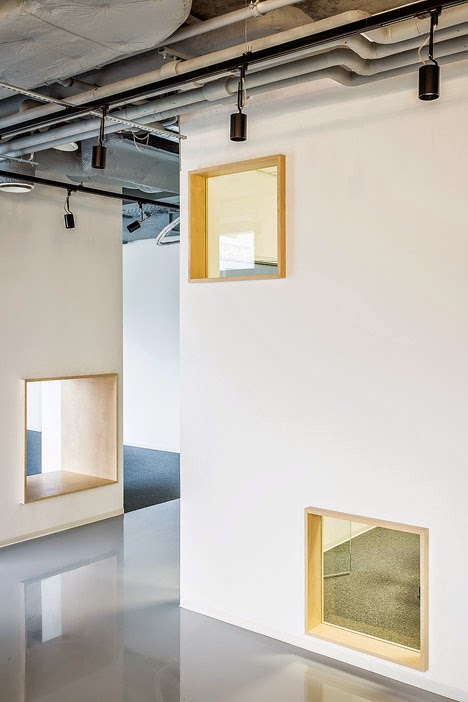 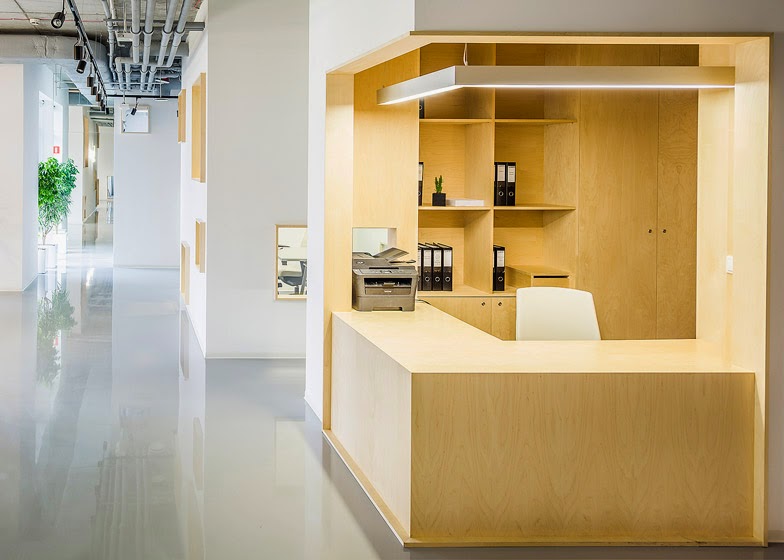 Next
Shelving from the future: Helix Furniture System by OSW