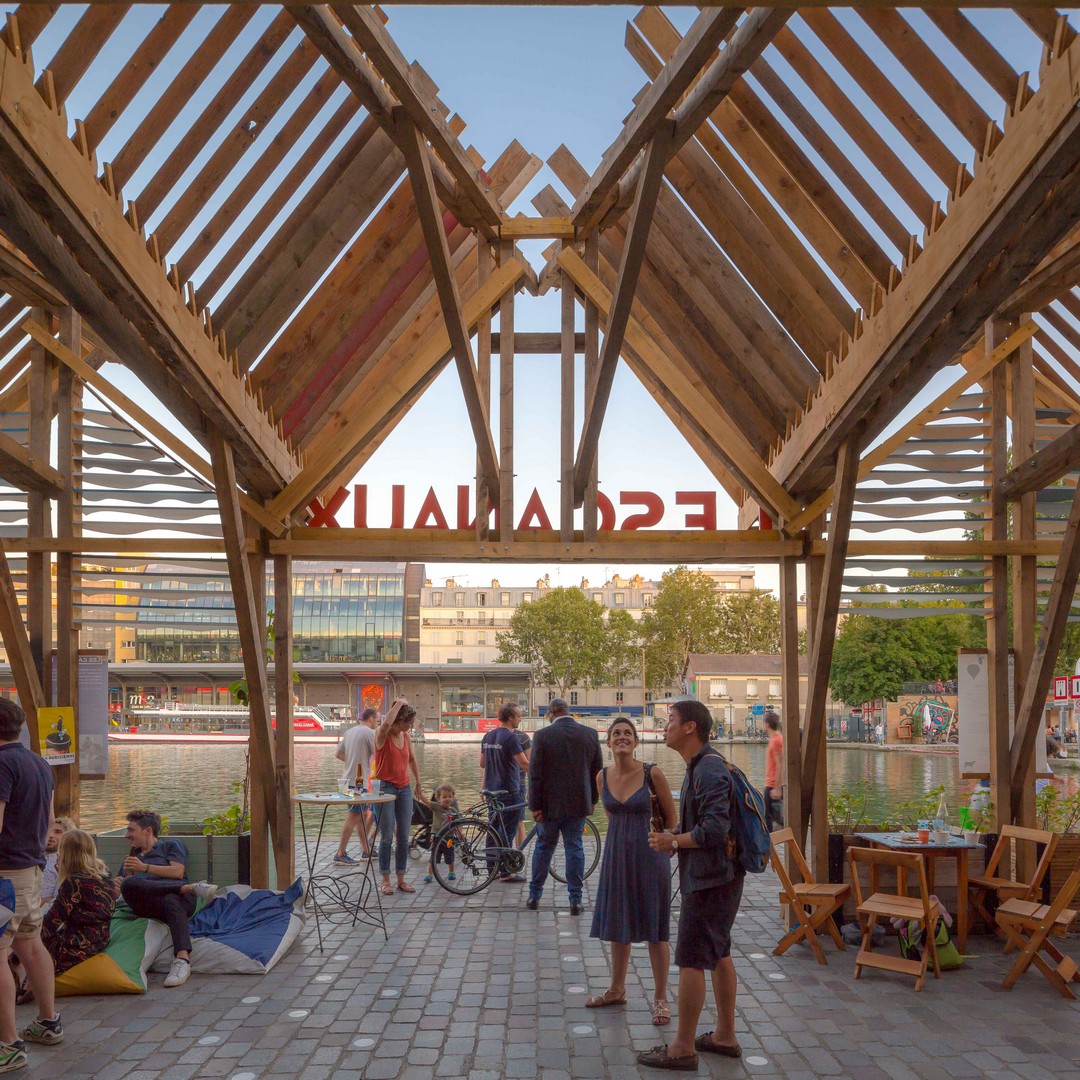 Shadow Of Channels: A Circular Shade House Made Of 90% Recycled Wood

A circular challenge- The architectural and structural manifestation of a threefold success story, this project demonstrates the strength of a collective, the advantages of circular economy and a practical application of the international FabCity movement. It came to life thanks to the support of Icade Promotion, REI Habitat, Quartus and SUEZ.

Following a call for projects published by Les Canaux: La Maison des Économies Solidaires et Innovantes (an organisation for innovative and solidarity-based economies), the collective Re-Store by WoMa (www.res- tore.woma.fr) was selected to create this shade house made of reused materials. The enterprising team was given two months to complete the project, which was tasked with enlivening the quayside during the summer months before being taken down in September. The structure was delivered on time, with 5 minutes to spare before its inauguration, and remained intact until its dismantlement.

With about 8.4 tons of reclaimed and reused wood, making up 90% of the shade house, the project was a real achievement in terms of reclaimed material use.

The purpose of the shade house ordered by Les Canaux was to shield the activities of the organisation from the sun during the summer, with notable demands: the materials used in its production had to almost exclusively consist of reused or recycled materials, and the project had to be completed within two months, from sourcing and design through to manufacturing. The Re-Store collective tackled these challenges by channelling its members’ diverse areas of expertise, from design with WAO Architecture (coordination), R-Use, Studio Pour- quoi Pas and EMA architecture, through to production with Super Cube (mandatary company), ReMake and Force Pure. The project was thus designed, produced, and materially sourced by various players.

The collective was able to build the shade house thanks to the generous space offered by the Orfèvrerie in Saint-Denis, where it could store its materials, as well as experiment and produce collaboratively. This third space was created by three partners: the proper- ty developer Quartus housed the collective; REI Habitat/REMAKE installed a carpentry workshop there, with machines and tools for traditional craftsmanship, and WoMa managed the space while contributing its community and digital skills.

With its sinewy wooden pieces, the facade of the shading house reflects the undulating movements of the canal. The roof was designed in reference to the hull of a boat; it compliments these movements and rises in its centre to mark the entrance of the house. It was designed as a storage rack made of wood planks as well as wooden elements cut out in the shape of a comb. This makes it possible to vary the inclination of the skylights that rest upon it. It also enables the structure to adapt to the dimensional heterogeneity of the sunbreakers. The study of the sun and the parameterisation of the model have actually informed the design of the vents whose orientation takes into account the sun’s trajectory to maximize any shadow it might cast.

The tubs play the double role of revegetating the terrace and weighing down the structure. They were made of wood recovered from the Réserve des Arts and the Re-store stock by our collective, with the help of Vergers Urbains for the revegetation.

The challenge presented by Les Canaux goes beyond this mere architectural project. It highlights a global challenge that all construction industry players need to tackle, be they architects, engineers, contractors or developers: reducing the use of new material and therefore reducing the use of limited resources, while reusing more of what is often discarded as waste.

Each project has an impact on the environment, ma- king it critical for the building and public works industry to fully commit to such an approach and avoid following the linear consumerist path where products are transported only to be discarded. We need to favour a circular approach whereby we produce new commodities from waste material; where knowledge is also shared freely among cities, promoting the expansion of a wealth of new strategies. The shade house project is also in line with the global Fab City movement which advocates a move from a “Product In Trash Out” ideology to a “Data In Data Out” philosophy (www. fab.city).

The structure must be reassembled in the spring for a REI Habitat project and serve as the project house for the renovation of the Freedom Museum. No part of the project was discarded

WAO Architecture develops two activities concomitantly: architectural production on the one hand, and research on circular economy on the other. Both activities feed one another in a virtuous circle that favours a type of innovation directly applied to a mode of construction in which materials are given a second life rather than being discarded and replaced by new ones. Our twofold focus informs every stage of the conception and construction of our projects:

WAO works on circular economy via R&D as well as via its practical applications to architectural projects. Each operation is for WAO an opportunity to apply the findings of the R&D arm of the company as a proof of concept. In return, the agency’s architectural production gives concrete answers to the questions brought up by its R&D department. We truly believe in the need to drive the building industry to work towards a new way of seeing architecture, and towards circular architecture…

Previous
How This Apartment Building in Argentina Maximises a 235sqm Lot