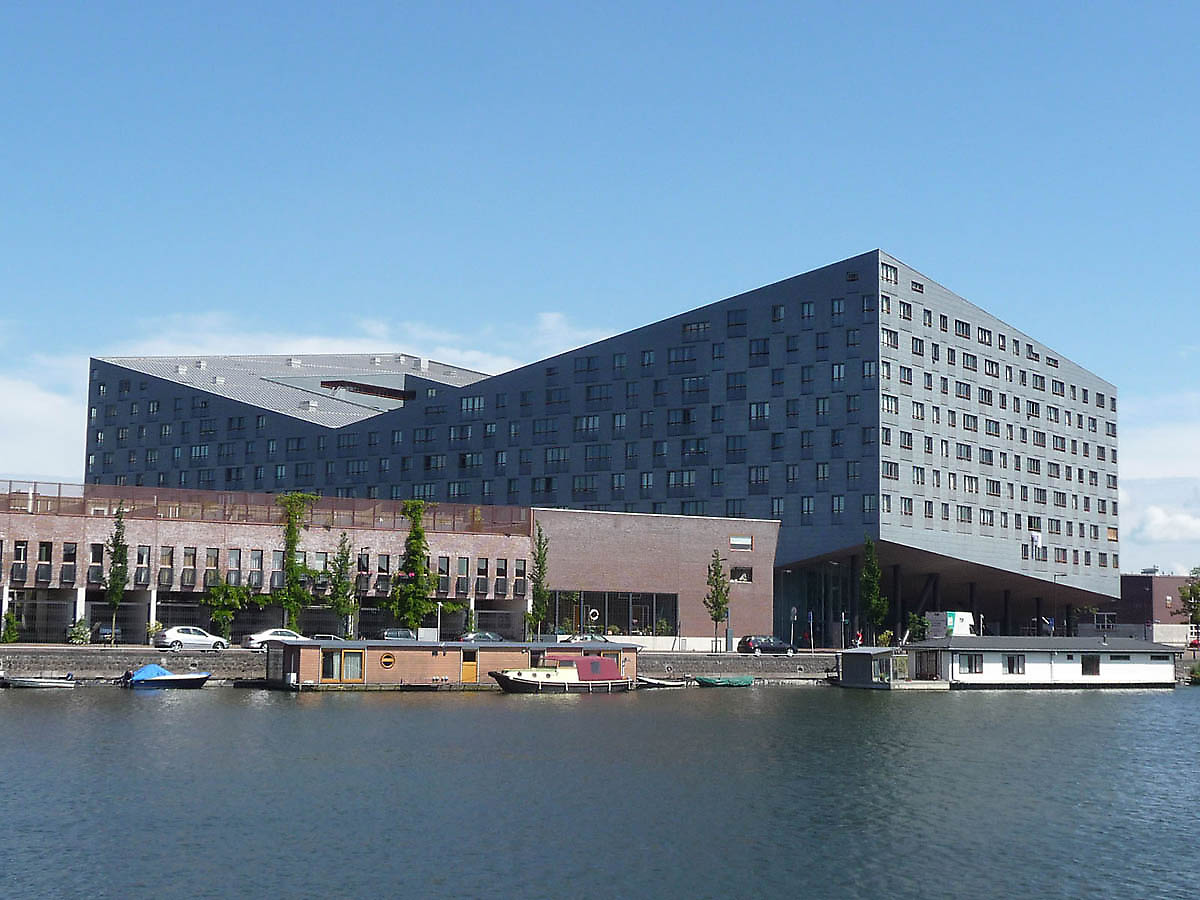 The Whale is a housing project in Amsterdam designed by De Architekten Cie and developed back in 2000. Comprising over 200 apartments as well as office/rental space, the whale is a prime example of high density housing that does not compromise design. Its peculiar form and massing aid its function and optimise its location, thereby evolving its courtyard typology to be more effective for both residents and the public.

The design is actually intended as a suburban programme within and urban context for which the required density is 100 dwellings per hectare. To achieve this urban concentration the designers introduced a fresh typology: inspired by the surrounding water, they created a sea of low-rise buildings, given rhythm by the variation of blocks and open spaces. This rhythm recurs on a larger scale in the tapestry of land and water characterizing the whole area. The sea of low-rise buildings is interrupted by three enormous ‘meteorites’, both to throw into relief the low-rise landscape and to achieve the inner-city density. 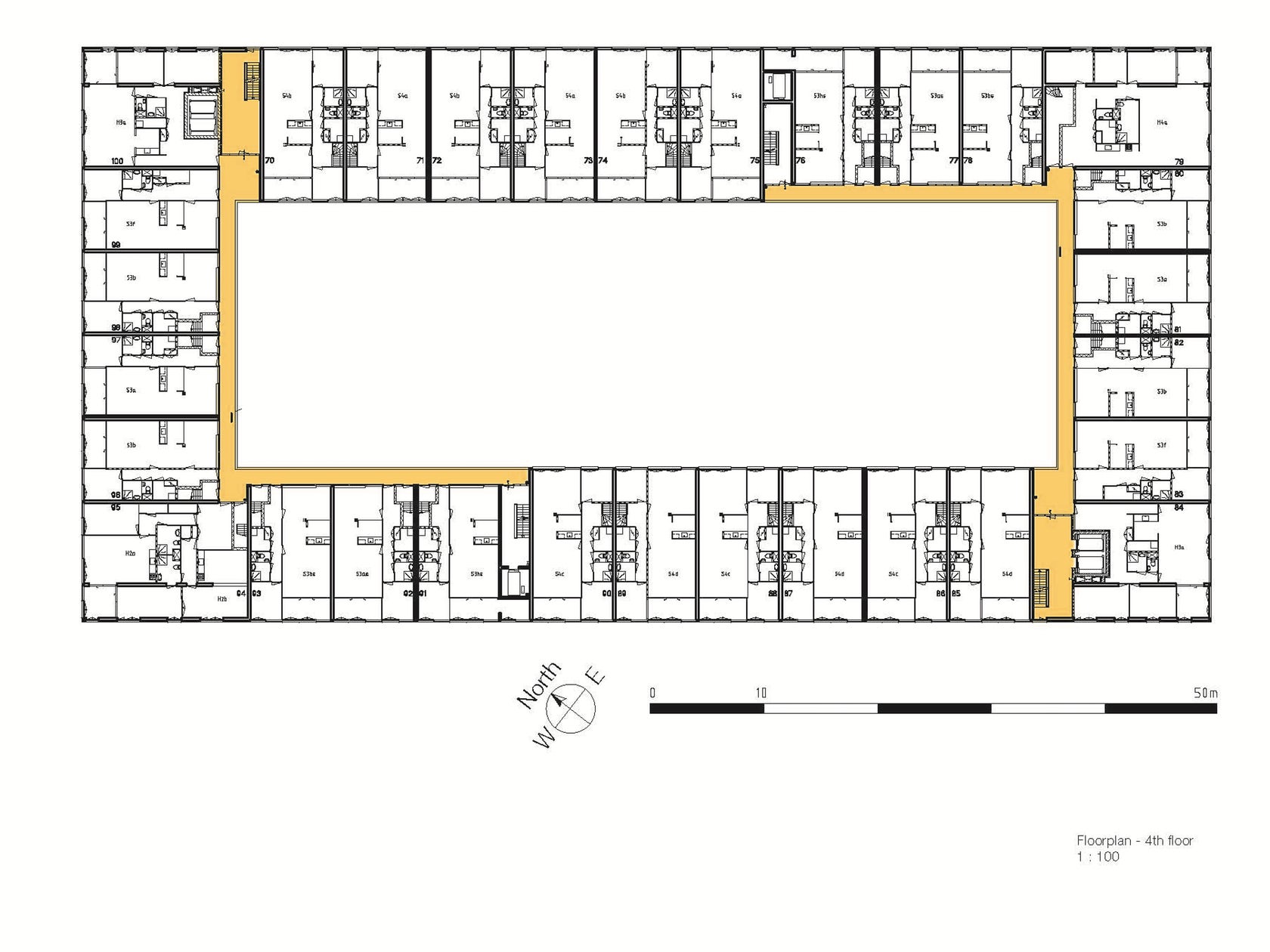 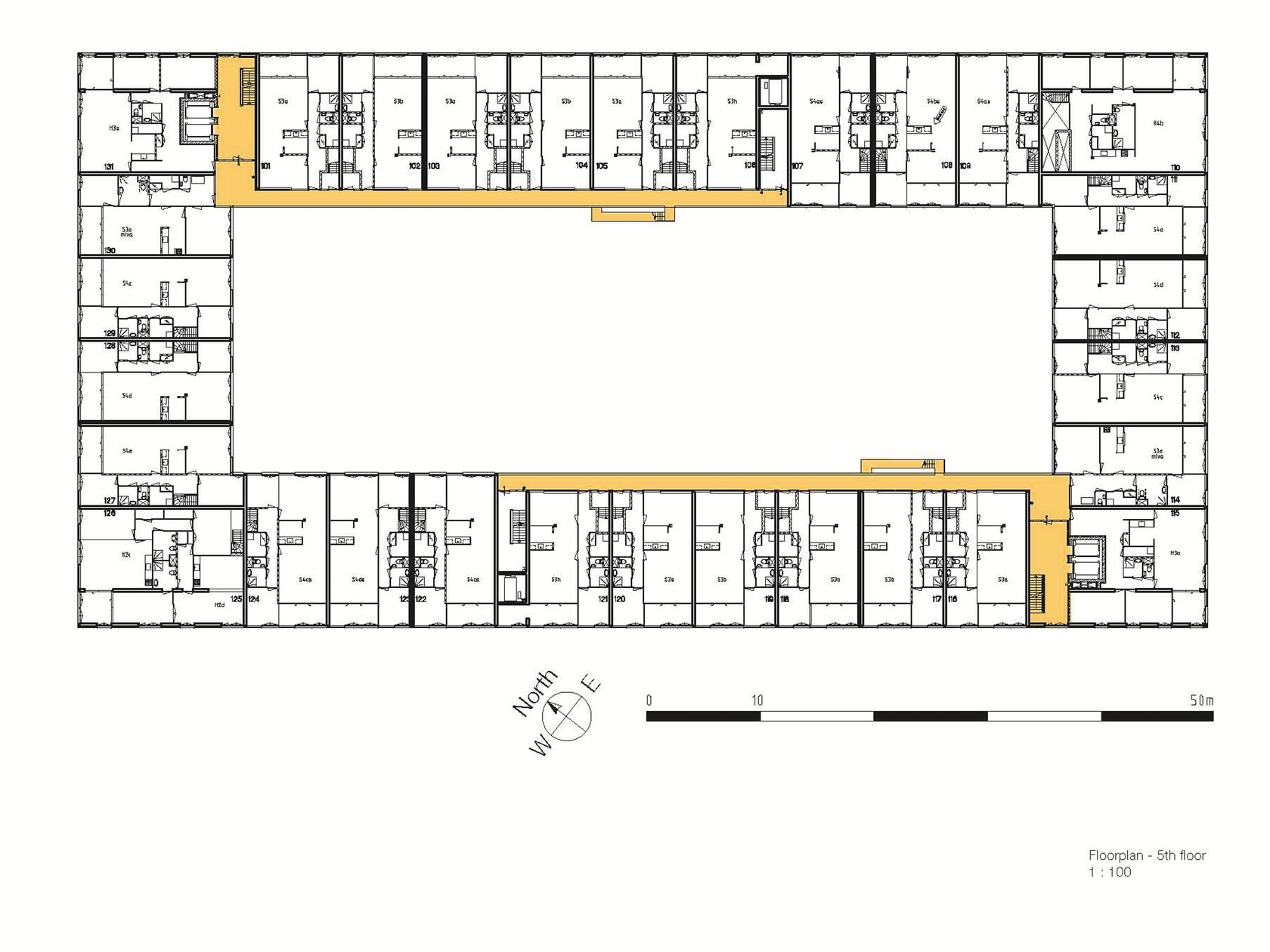 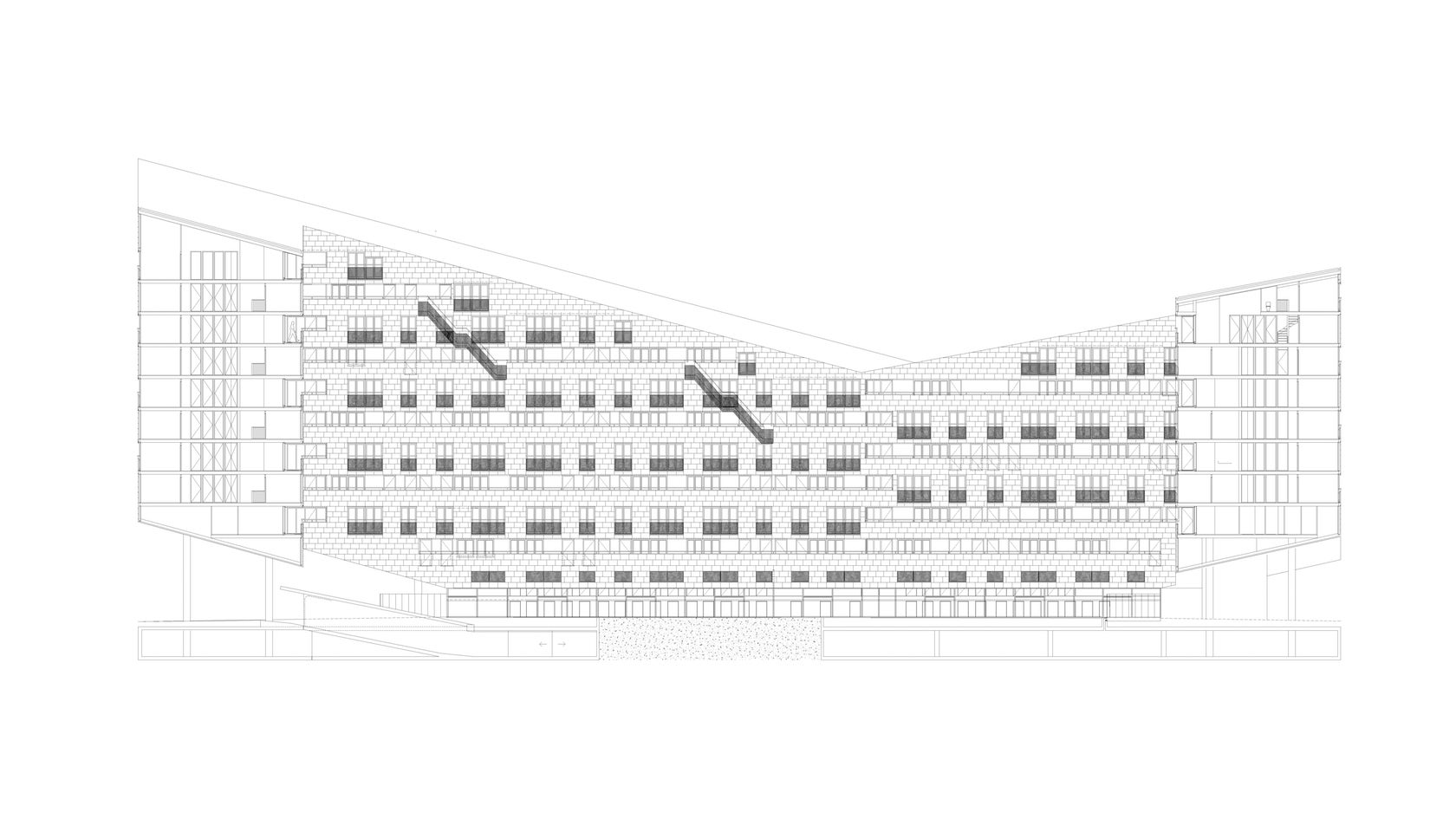 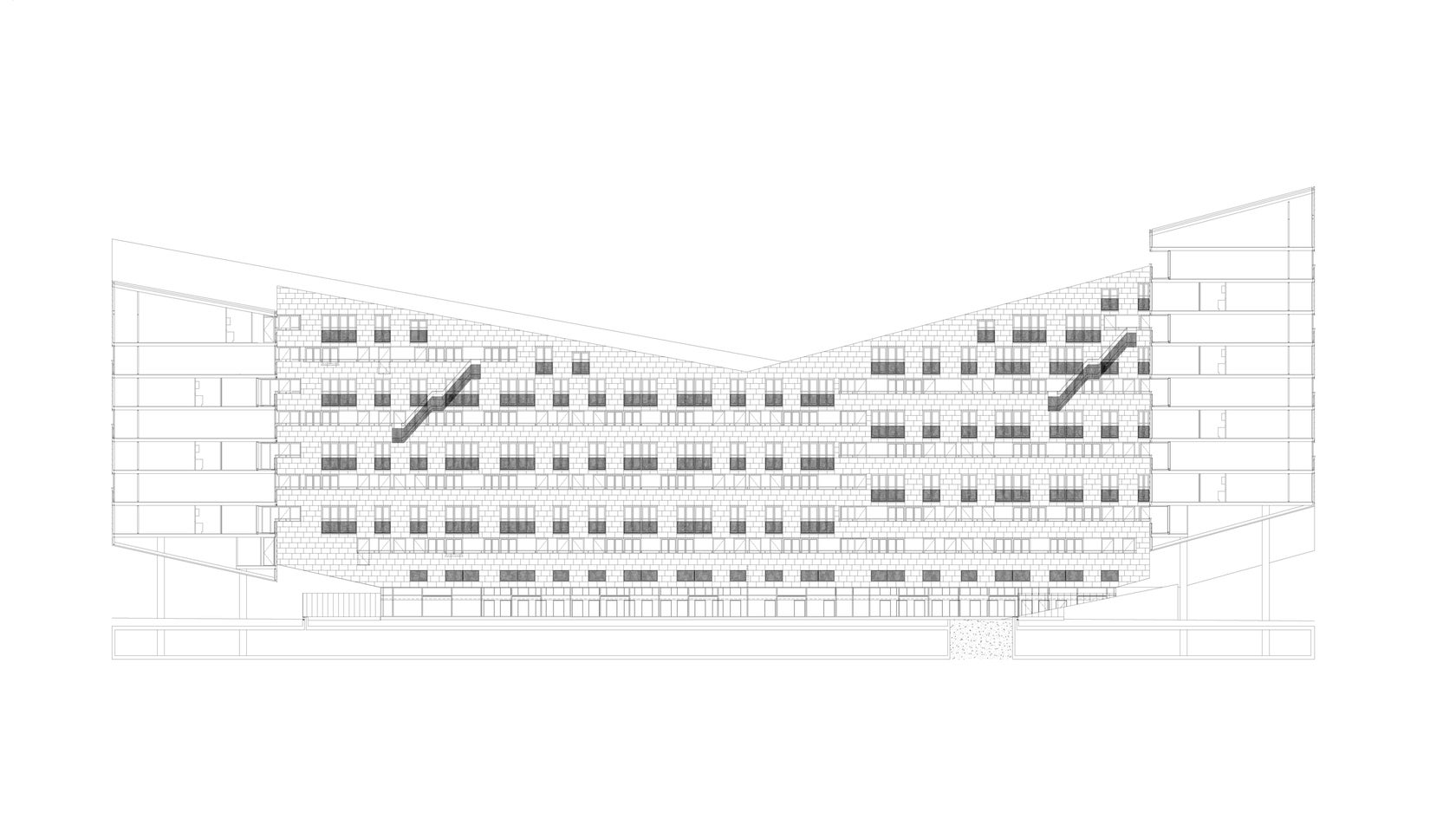 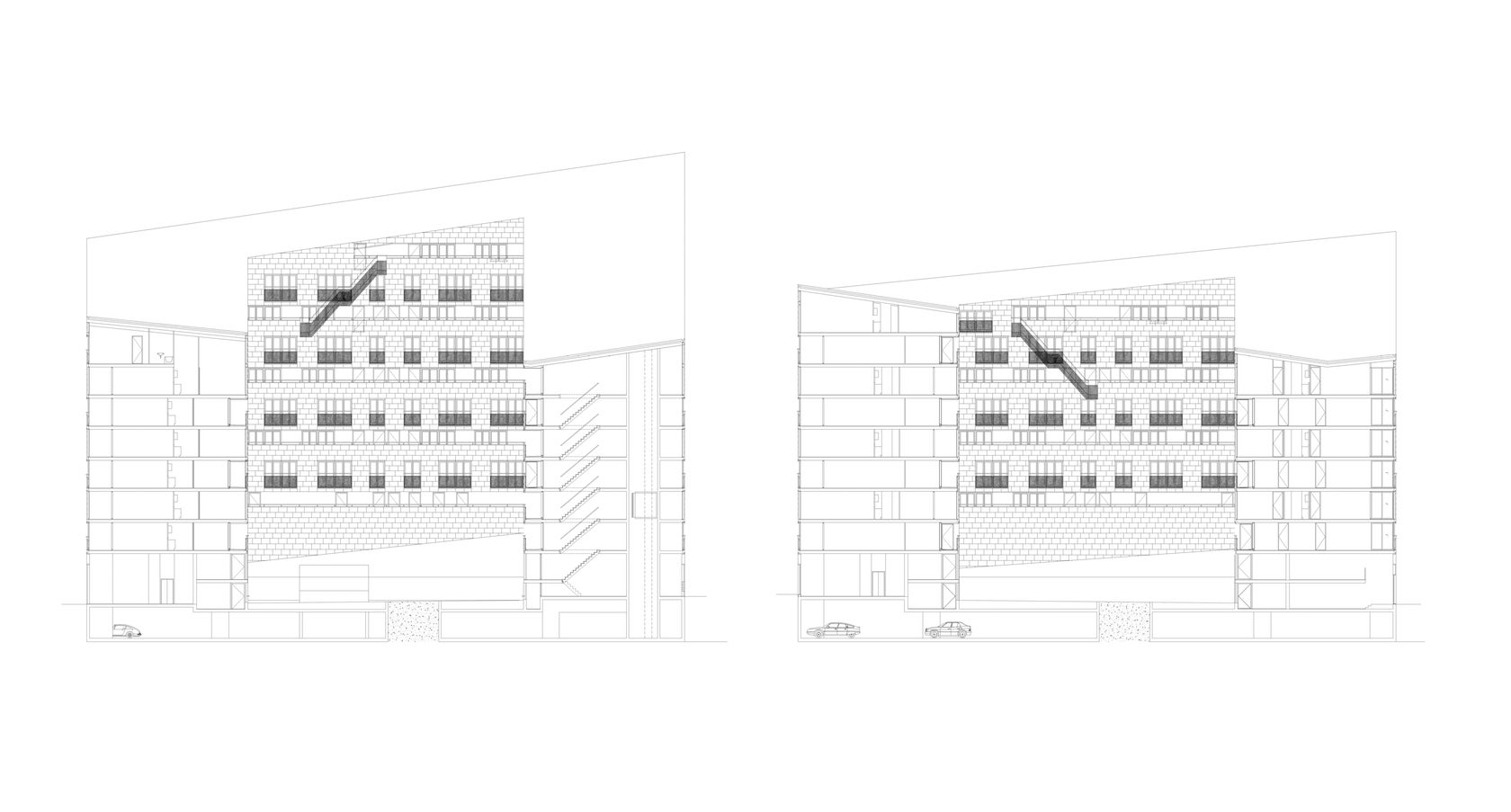 The inner city character is reflected in yet another way: the 3.5 m high ground floors of the low-rise buildings create a programmatic flexibility that allows for both living and working.

By elevating the building on two sides – the line of the roof corresponding to the movement of the sun – the lower floors receive sunlight coming in from under the actual building. Accordingly, light and space have free access into the heart of the building. The result is a redefinition of the closed block: the inner area transforms the traditionally private domain into an almost public city garden. 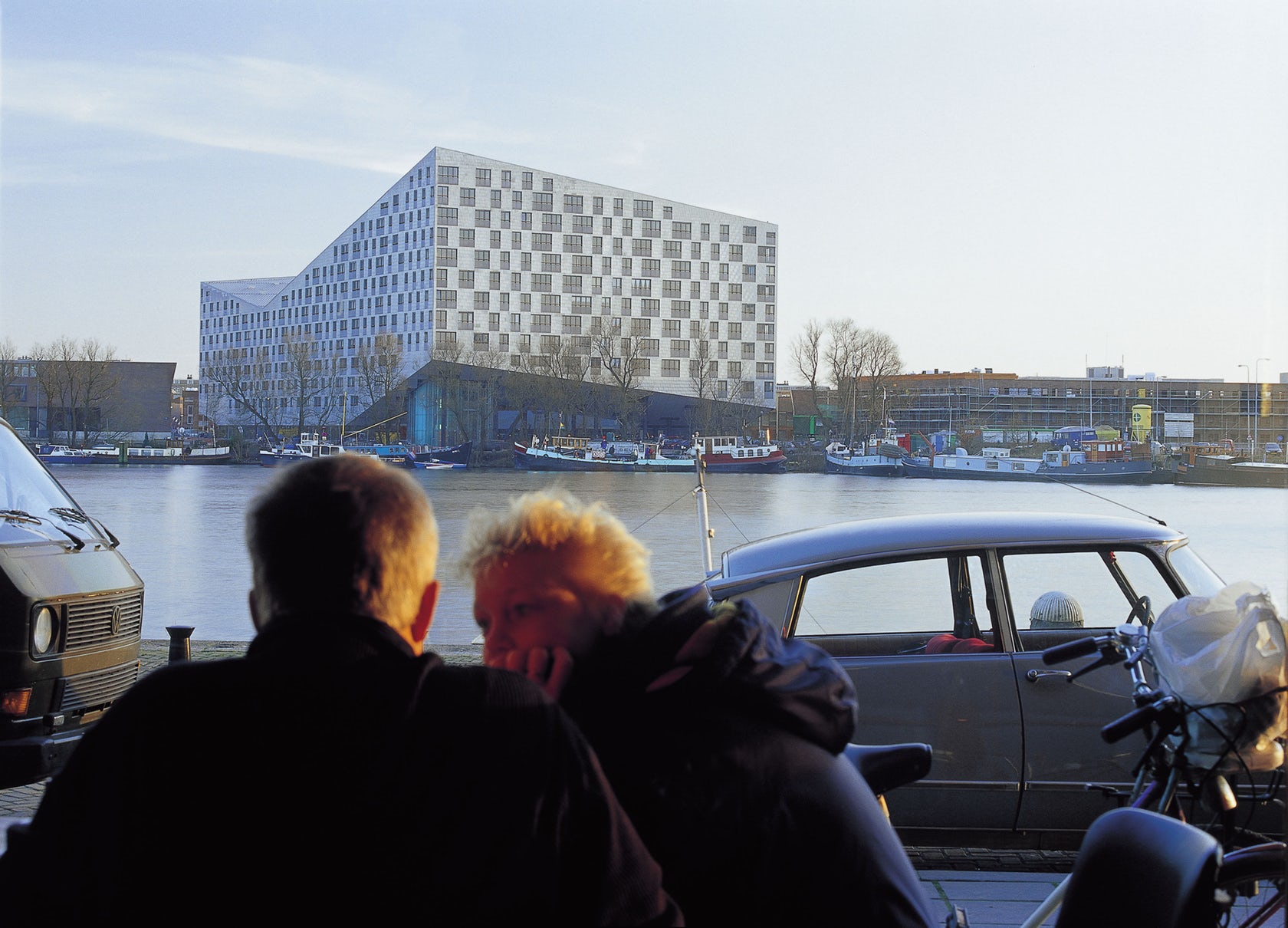 The elegant, elevated form conceals the enormous programme: 214 apartments with business areas underneath and an underground car park on a plot as large as a football field.

As a consequence of its extraordinary design, The Whale consistently affords different views of the environment from various positions generating at the same time an enormous diversity of housing types in the lower and upper edges of the building in particular. Conservatories provide an expansive view of the Amster-dam inner city and across the expansive waters of the river IJ. 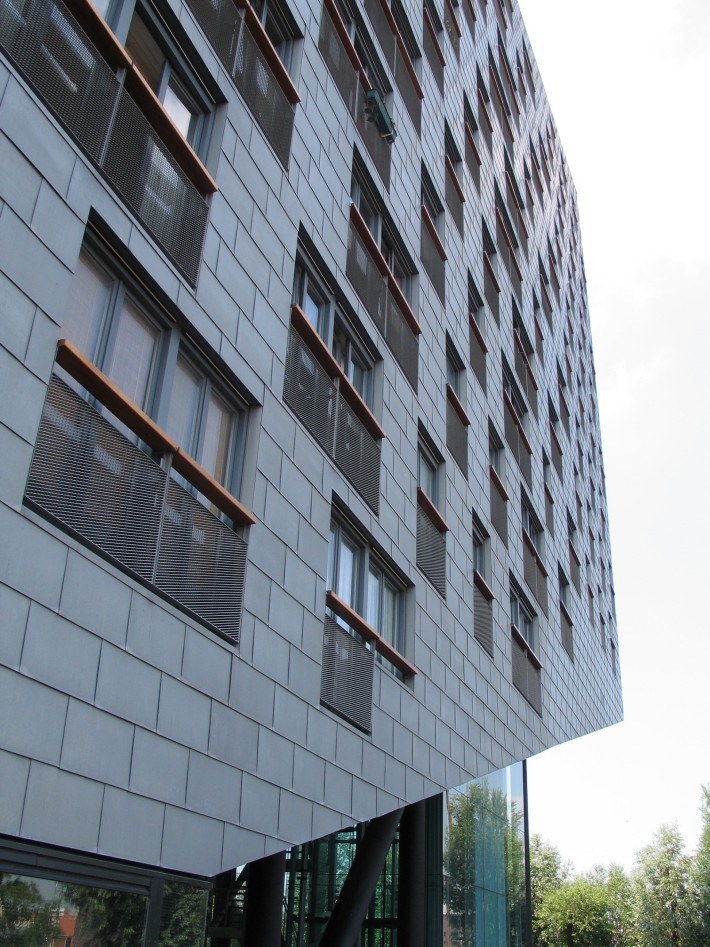 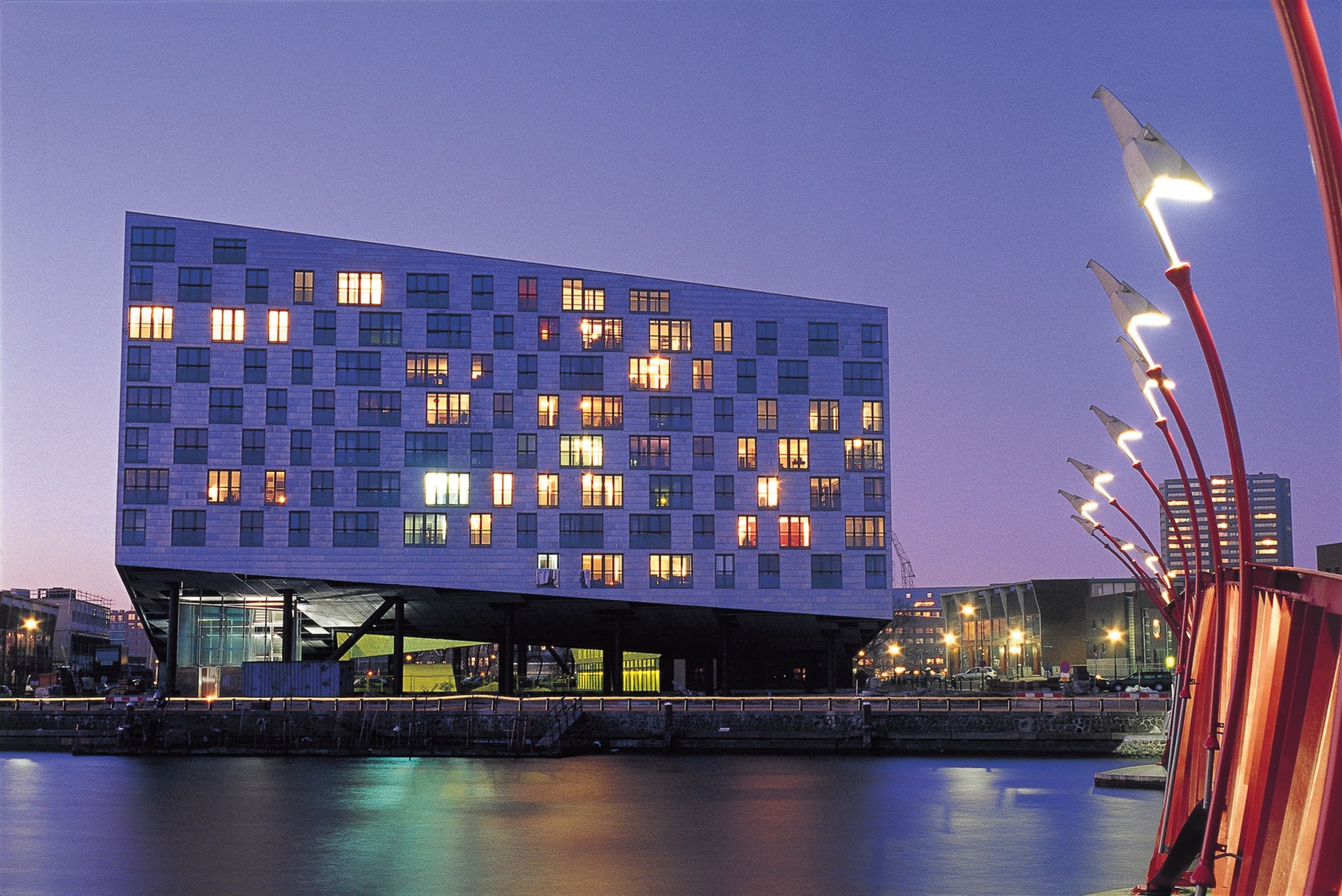 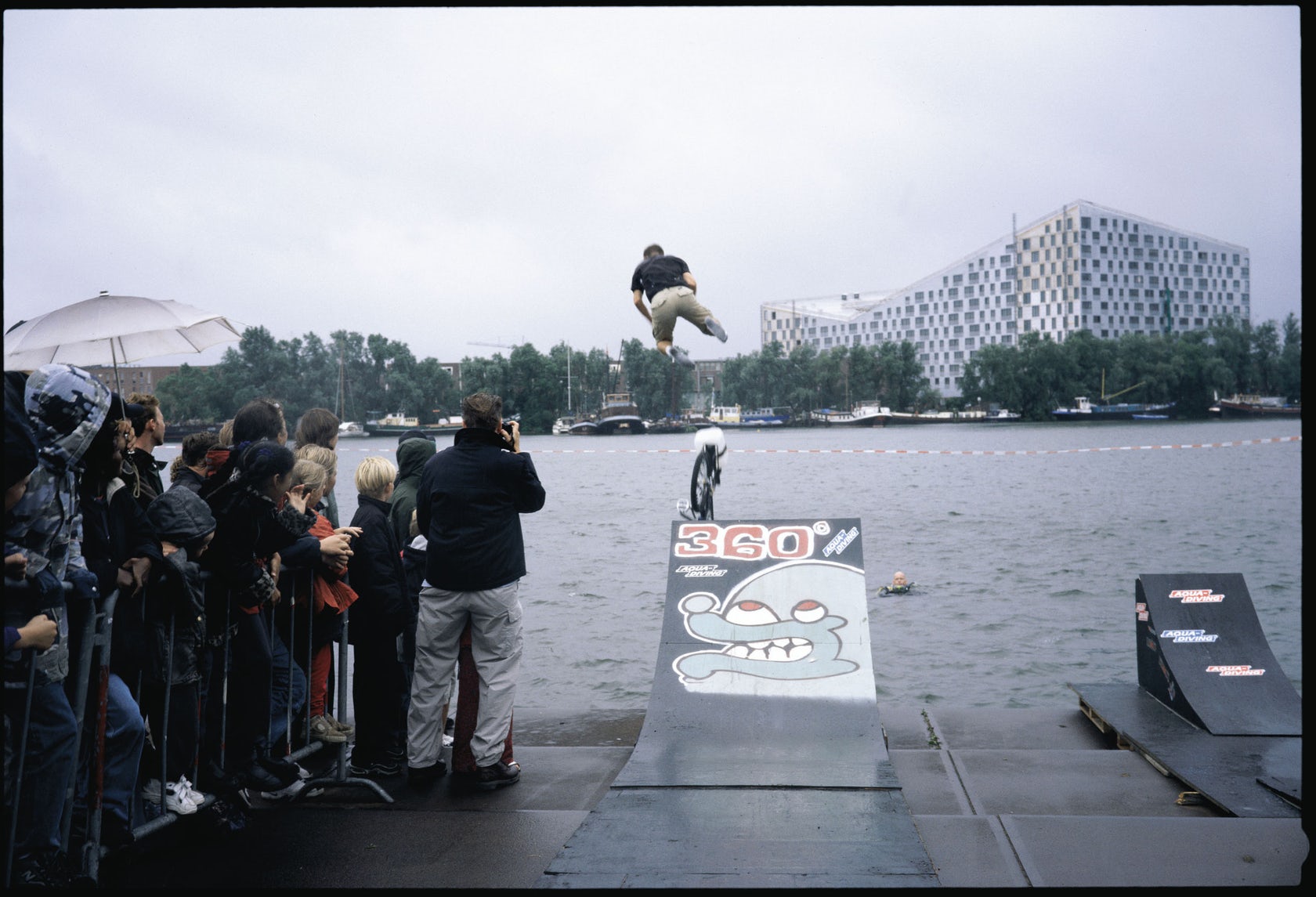 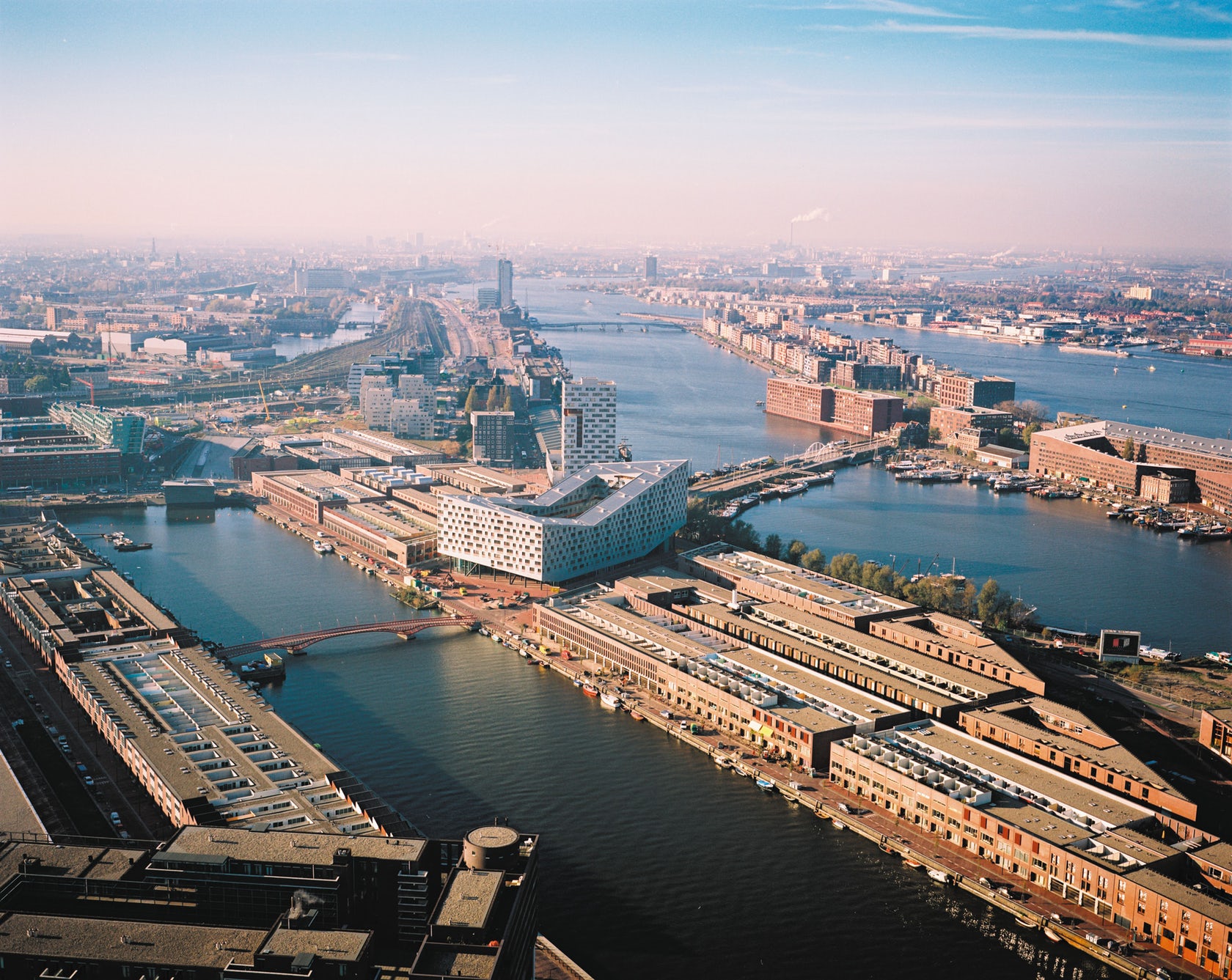 Some more images of ‘The Whale’ from across the web,

Next
FROM OLD STABLE TO MODERN STUDIO: CASA LELA IN PORTUGAL BY OFICINA D’ARQUITECTURA