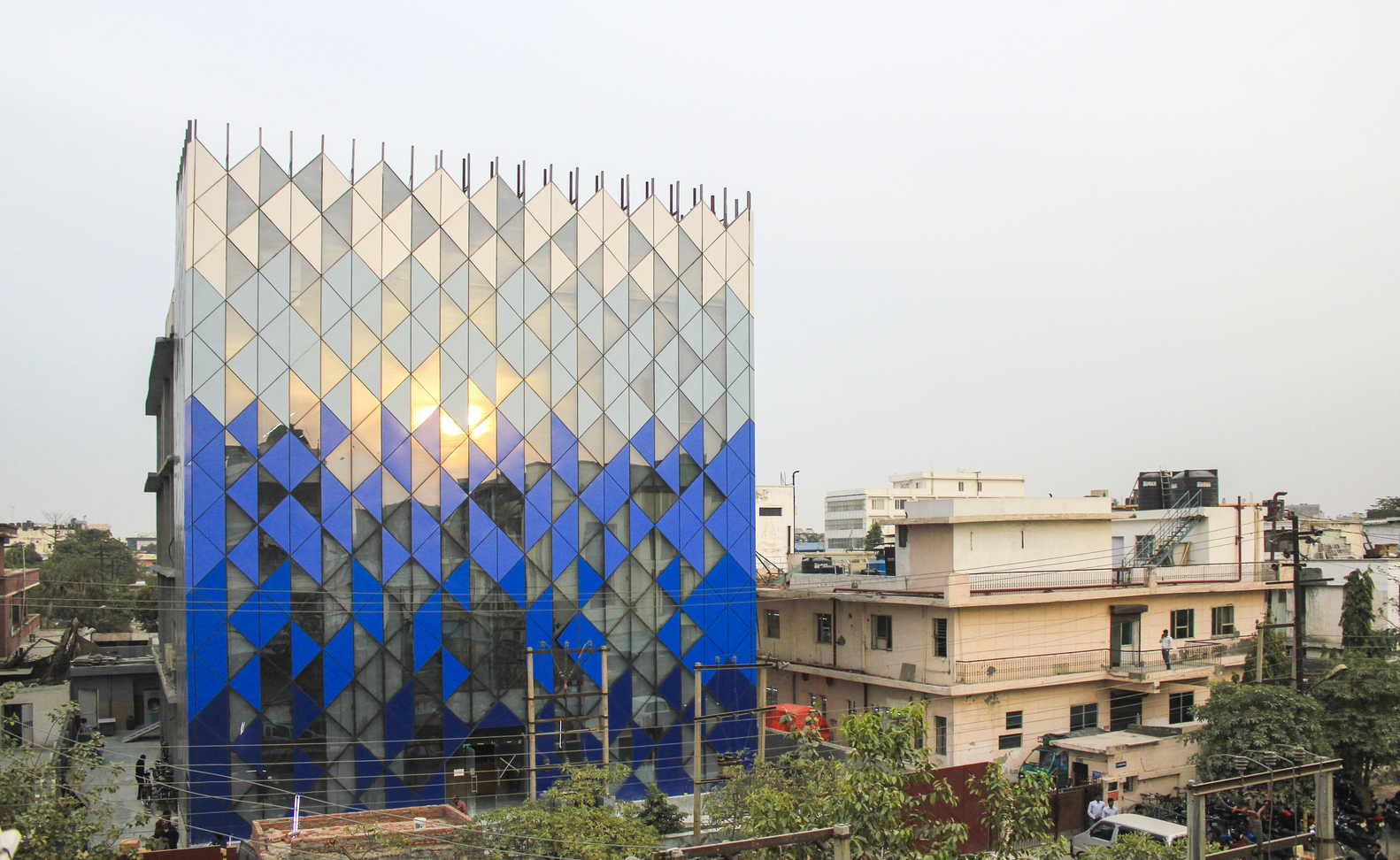 Completed in 2018, the building features a distinctive facade of tessellating aluminium and glass triangles, which ‘weave’ together to form an engaging pattern- a nod to fabrics and garments which the factory produces. The apparent randomness of the pattern is governed by a desire to manage materials as well as interior day lighting requirements. The architects offer further insight in the text below.

Tessellate (verb) “to cover (a plane surface) by repeated use of a single shape, without gaps or overlapping.”

The persistence of zoned industrial areas surrounding growing cities is a vestige of Ebenezer Howard’s conceptualization of an ideal city. Howard understood that the production of goods was vital to the economy, but couldn’t bring himself to harmonize the idea that manufacturing could exist within the city. Generations of successive urban planners have laid out industrial areas far removed from the dense city centers where they once prevailed, choosing to mistakenly empathize with the needs of the urban elite, rather than with the blue-collar working class, whose commute remained an unessential component of the decision making process.

​The New Okhla Industrial Development Authority (or Noida), is one of the few municipal organizations in the world where the city agency has lent its acronym to the very city it services. Noida, as the region to the south-east of Delhi’s Yamuna, is colloquially known, is home to one of the largest “planned” areas in the region. A vast swathe of seemingly boundless grids has been overlaid over the landscape, with sector numbers running into triple digits. Connected via an immense highway to the south is Greater Noida, an equally ambitious planning exercise that is home to institutions, multi-story residential buildings and even, an erstwhile formula one racing track. Nestled amid this conurbation is the Hosiery Complex, an industrial hub allocated to the garment manufacturing business. Twenty years in the making, the surroundings still very much feel like a work in progress, as smaller industrial units give way to denser, vertical factories contained in multi-story configurations.

​To articulate a meaningful architectural response to such an insipid context, it was necessary to delve deeper into the intrinsic, to create a pattern, as it were. Fabrics are about patterns, often repetitive and the facade of this building uses layers (another garment reference), to create a multiplicity of surface textures. Cool grey glass is combined with a gradation of blue, grey, and white aluminum panels that seem to emerge with solidity from the ground, and eventually, dissipate into the horizon. The exposed ends of the framework peek out from behind the top of the finished cladding, not unlike the tassels of a carpet, proud of their necessity in the process.

​The name of the building is derived from the visual complexity of the facade. To tessellate is to repeat a pattern to create a plane. The unit chosen here is the triangle, the proportions are so chosen for the ability to extract exactly four equal four-foot (1.2m) side pieces from a single 8 x 4 (2.4 x 1.2m) sheet. Apart from longevity, the idea that material must not be wasted is a key component of our approach to sustainability. While the glass panels may appear randomly sprinkled, their positions are the result of interior daylighting requirements. The colors of the panels themselves have been chosen for better light absorption at lower levels, with higher levels of reflectivity close to the top of the building. A tubular aluminum frame supported on robust metal brackets underpins the facade. Diagonal cross-bracing support the glass and aluminum panels on the peripheries, creating the precise six-sided joints.

​The building is laid out to maximize the efficiency of manufacturing processes that are housed within. Pallets of fabric make their way down ramps to the storage areas in the basement, where they are cut and bunched into bundles, complete with accessories. These make their way to the upper floors, where lines of stitching machines produce the semi-finished product. The final touches of packaging, labeling, quality control, and despatch are handled on the ground floor. The office space dominates the first floor, with the largest areas allocated for the sampling section and a workspace for the designers. This workspace was designed as white space, a blank canvas to encourage creative freedom while reducing strain. A showroom and a few private offices line the perimeter, while a corridor provides the requisite access to the rear fire escape stair.

Next
Take a Look Inside This Renovated Mid-Century Ranch House by Mark Ashby Design in collaboration with Rick+Cindy Black Architects.