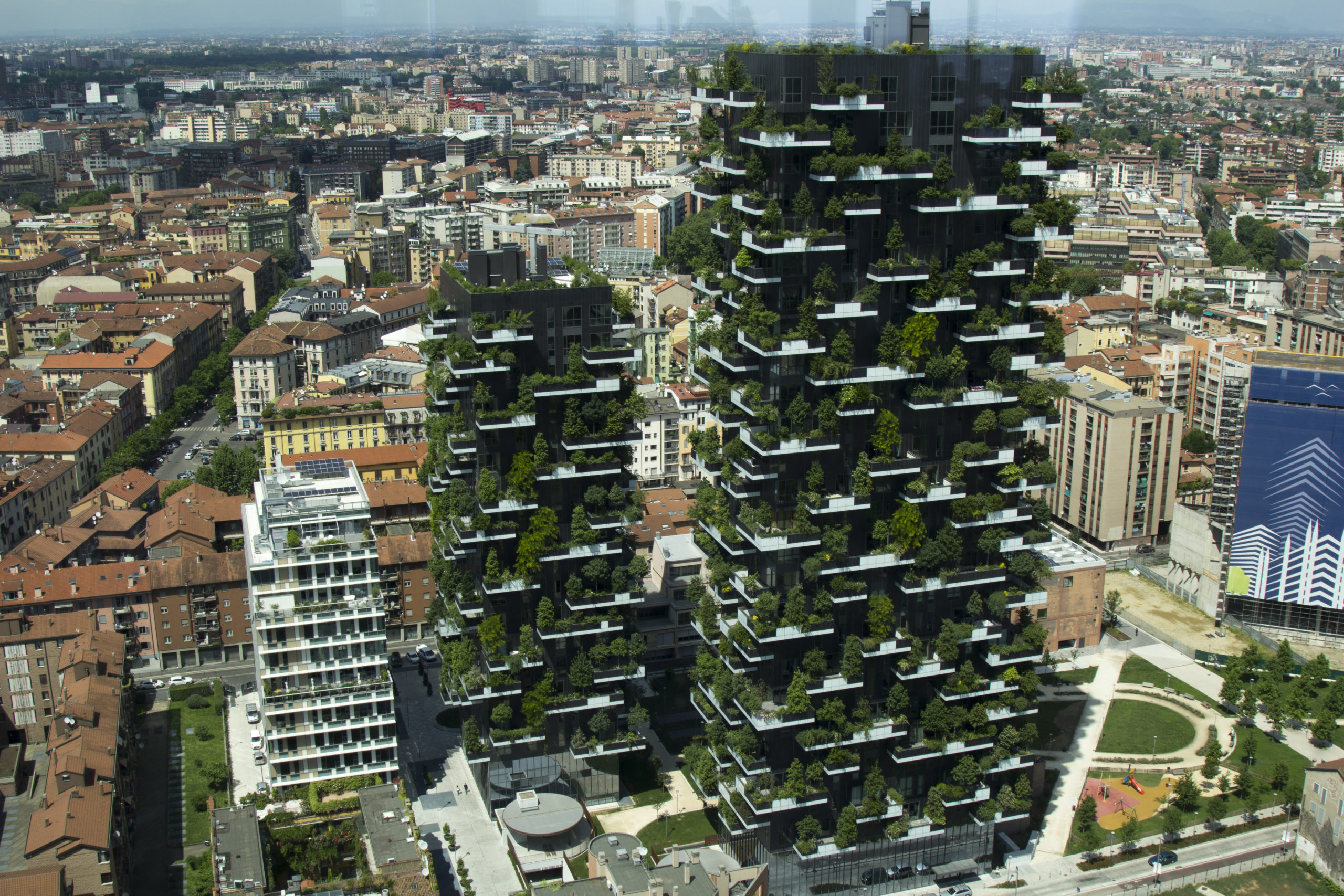 Trees in the sky: The Bosco Verticale project in Milan by Boeri Architects

If asked to describe today’s Urban City, a distinct lack of green would be a peculiar feature across the board. Today’s cities are predominantly concrete, steel and glass monstrosities that take no consideration for the environment or the end user and are thus largely unsustainable. Generic Tall buildings Skyscrapers typify this practice as they are often disconnected from nature and the environment due to the their height. Urbanization and over population also contribute to this state of our concrete jungles.

A unique project in Milan, titled “Bosco Verticale” (Vertical Forest) seeks to address this. Designed by Boeri Architects, the idea is to help remedy the environmental ‘damage’ that has been inflicted upon the city of Milan and mitigate the urban heat island effect within the area through reforestation and naturalisation. This would significantly contribute to the to the regeneration of the immediate environment as well as the urban bio-diversity of such a large urban and metropolitan area. All this without having to expand the landmass to accomodate the required vegetation. Basically, its putting trees in the sky to enhance dense, vertical, urban living.

The Striking design comprises two high-density tower blocks with a facade of planted trees and vegetation.
This ‘green facade’ creates a microclimate that will most certainly comprise a variety of birds while helping to capture CO2 and dust in the air, and produce oxygen and humidity. This is turn reduces the need to mechanically heat and cool the apartments within the tower blocks(most especially in the 100 degree summers).
Towering at 78m and 110m, with 18 and 26 floors respectively, both structures host about 900 trees (ranging in heights from 3-9 m), as well as over 11,000 ground cover plants and 5,000 shrubs, each distributed in relation to their individual solar orientation on the facade. To give an idea of just how staggering these numbers are, on a flat plane, each tower amounts to an area of about 10,000sqm worth of forest!
Apartments within the towers range from small 65sqm apartments with a small terrace to large 450sqm apartments with 80sqm worth of terrace. This population density catered to within each tower is the equivalent of 50,000sqm of single family dwellings, call it a big residential estate……in the sky.

Another very cool aspect of the facade, is the fact that it will change colour as the seasons change, with autumn offering warm, earthy colours while spring and summer would see lush greens with bright accents dotting the elevation.

It is worthy of note that the trees planted were not just randomly picked but were selected based on their predetermined position on the ‘green facade’. It took a team of botanists over two years to decide which trees and plants would be best suited for the structure and the climate. The selected plants were then pre-cultivated to aid in their acclimatization to the conditions they would experience in their ‘new home’. For maintenance, a specialty company has been contracted to ensure the vegetation within the vertical forest stays in good health for years to come.  Other features of the development include an intergrated photovoltaic system that will provide power as well as greywater recycling to water the vegetation.

Truly an innovative approach, the Bosco Verticale has generated a great deal of buzz on the global scene with the property already on the market and residents poised to move in, it is sure to be a winner and offer a different experience in the world of big city living, while providing much needed reforestation and greenscapes within a dense urban fabric.

Previous
A Home for the Homeless: The New Jerusalem Orphanage in South Africa by 4D+A

Next
Sofa of the future: Offecct Airberg by Jean-Marie Massaud