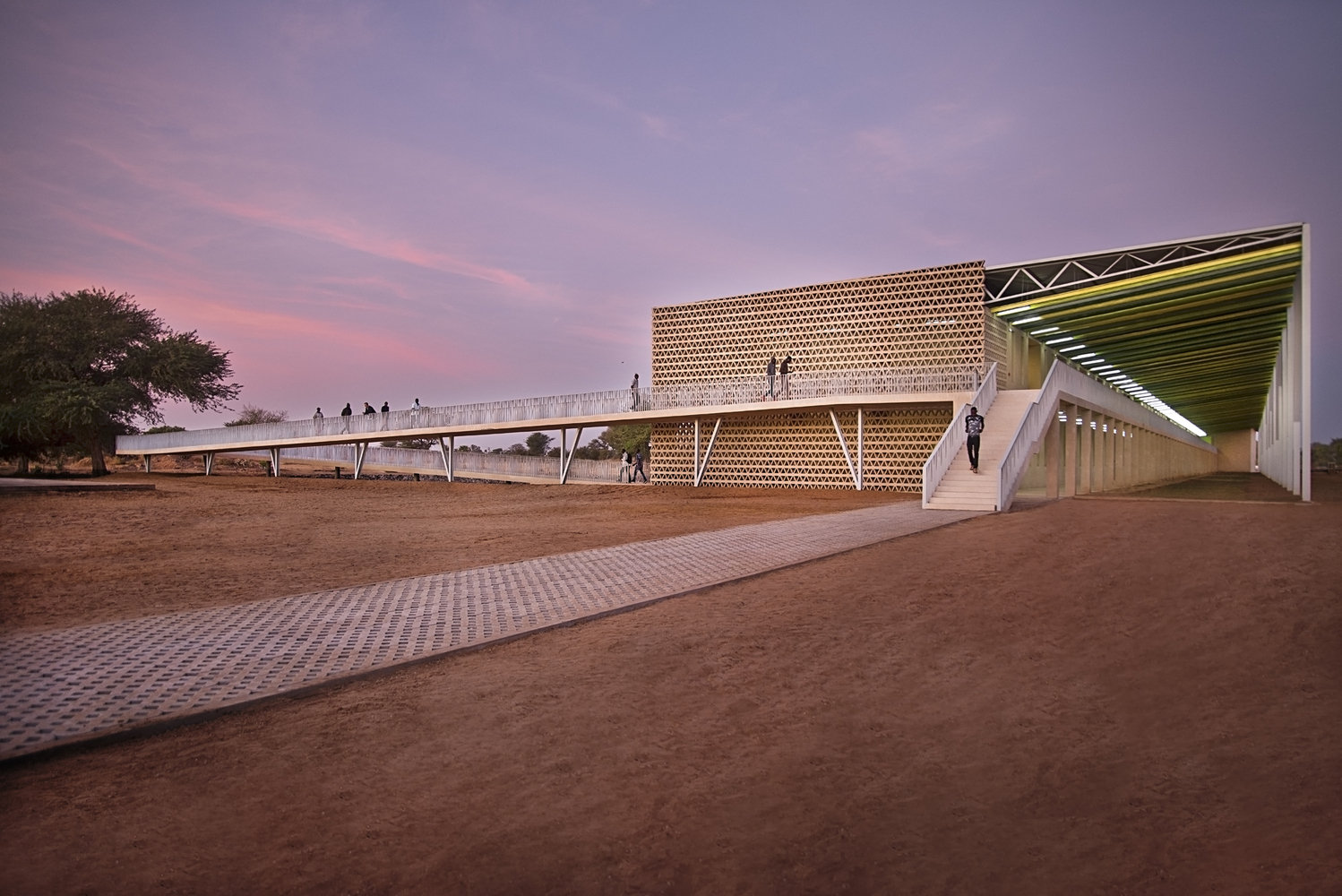 Located in Bambey, Senegal, this lecture building in Alioune Diop University of Bambey was designed by Global consultancy IDOM as part of a program to improve the countries universities.

The Government of Senegal, financially assisted by the World Bank, decided to start an ambitious plan to improve several universities in the country, commissioning IDOM to carry out the project and site supervision for a new lecture room building for 1,500 students at the University of Bambey, to the West of the country. The plan includes lecture rooms for 50 and 100 students, a 500 seat lecture hall, laboratories, computer rooms and offices for the teaching body, all distributed over an enclosed built-up area of 4,200 m2 and 11,500 m2 of urbanised area.

The city of Bambey, located 120 km west of Dakar and having a population of 20,000, stands out for its peanut and cattle farming. The few urban infrastructures and services are indicative of the poor surroundings and harsh life conditions. Some unusual starting constraints made us reflect on how to deliver a contextualized architectural response. On the one hand, we had to deal with the extreme climate of the Sahel area, with temperatures during the day reaching between 35ºC and 45ºC during the whole year.

For 10 months a year, it is also very dry and between July and September, torrential rain is characteristic, generating a contrasting arid-lush landscape which is unrecognizable between seasons. On the other hand, the shortage of resources in the country is noticeable both in the absence of technology and in the lack of skilled workforce and the limited building maintenance. On top of it all, the existing campus had no sewage system, road network or constant supply of drinkable water or electricity. Lastly, the existing buildings, in very poor conditions, were not in keeping with the expected functionality of a campus.

Faced with these circumstances, we planned to respond with a building both simple and repetitive in its construction, of a scale commensurate to the campus, very practical and integrated into the environment whilst generating optimal conditions for protection against the extreme weather. We found inspiration on campus by observing the behaviour of the students. This led us to the idea of reproducing a great tree as a contributor of shelter, which would offer shade, coolness and comfort to its users without energy consumption. We therefore developed the project from its cross-section, providing the building with a large double roof with a metal sandwich panel and insulation on top and a dropped ceiling of mineralised fibres on the inside. In other words, layers of tree branches, with air flowing in between them.

For the south façade, the strategy was different: we created a large latticework, permeable to air, which eliminates any solar incidence towards the interior and acts as a great filter of solar radiation, extreme in this environment, but still allowing enough light through for the interior functional needs. We planted citronella grass in the cavity between the two skins to avoid the presence of malaria-bearing mosquitoes and to freshen up the space. Complementary, the roof is extended into a 10 meter long canopy, covering a wide exterior area, sheltering students when not in class.

The combination of both systems, the double roof and a double-skin façade, having 1 and 3 meter cavities respectively, makes it possible to create a Venturi effect: the heat concentrated on the outer skin of the façade ends up flowing under the roof, eased by the inclination of the latter. This system allows for a high percentage of outside heat to be dissipated while at the same time generating a constant flow of air through the cavity of the building’s envelope.

The result of applying this bioclimatic strategy has made it possible to reduce the interior temperature by 10 degrees, with no energy consumption and with satisfactory interior sunlight conditions.

Finally, to solve the lack of sewage networks problem, we incorporated infiltration rafts with vegetation that collect rainwater as well as an activated sludge purification system for waste water, which, once purified, is discharged to the same rafts. The set of rafts is laid out in keeping with the surroundings, as a natural meander, accessible during the dry season and favouring the natural development conditions of native vegetation, avoiding any attempt of growing vegetation that requires maintenance or consumes water.

Lastly, we wanted our project to be sensitive to the social component. For this purpose, we designed a façade made up of blocks with triangular perforations that could be prefabricated in situ by the local unskilled workforce. And so, the 20,000 concrete blocks were built manually on site by means of a stainless steel mould and then air-dried. The construction of the 2,000 m2 of the south elevation lattice employed over a hundred workers from Bambey for 6 months.

Next
The Beacon by ALL Design and Kiloran Development group will be the largest shopping mall in Nairobi, Kenya