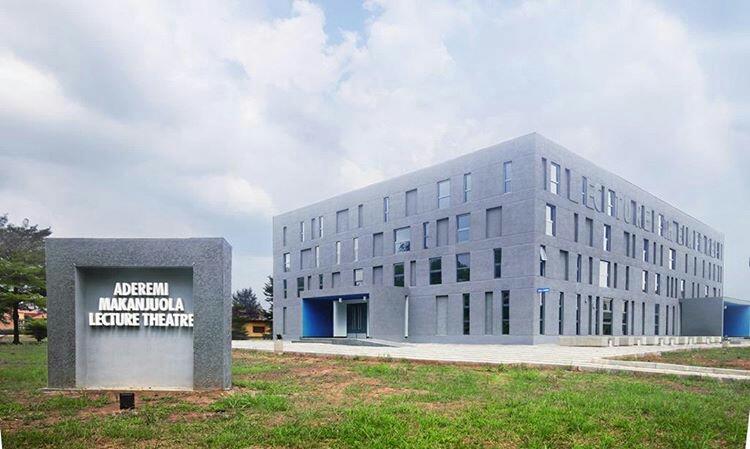 Completed in 2018, the RMKJ Lecture Theatre is a 500-seater facility designed by Patrick Waheed Design Consultancy (PWDC) for Mr. Aderemi Makanjuola as a donation to the Lagos State University (LASU).

Lagos State University, (LASU) established in 1983, had a designated site for a lecture theatre in the university master plan, but for over 30 years lacked the funds to develop it. The donation by Mr. Makanjuola, (who has been a part of the university’s governing council since late the ’80s), marked his 70th birthday, and is the second of two lecture theatres PWDC have designed for this grand patron of education. The first was in Kwara State, Nigeria, in honour of his late mother. ​

The building programme includes the lecture theatre on a raked floor, with the main reception lobby, male and female conveniences, a store, printing centre and janitor rooms underneath the terrazzo finished sloping concrete slab. The two main staircases lead to the upper floor of the lecture hall on the east-wing. In the west-wing are offices, changing rooms, and conveniences. There are three entrances into the building; one leads to the entrance lobby; the other two are in the north and south facing walls and lead to the lower part of the theatre.

The lecture theatre is a two-storey building with four tiers of windows on all four elevations. It is painted a dark stealth-like grey to single it out and give it a strong presence within surrounding non-committal architecture of the university campus. The brief initially included a mezzanine floor but due to budget and height restrictions, the extra floor was omitted. However, the client asked the architect to retain the facade of four rows of windows, of which the topmost in the parapet wall concealed the long span aluminium roof and air-conditioning plant.

This building is to be enjoyed from the inside and the outside. To facilitate this the architect’s created RMKJ corner, a place where students sit, interact and contemplate their surroundings, life and beyond, thereby lending itself to the notion that:

“a profound design process eventually makes the patron (Aderemi Makanjuola), the architect (PWDC) and every occasional visitor (the students) to the building a slightly better human being”

You can get more detail about the RMKJ Lecture Theatre and the Principal of PWDC, Ade Shokunbi, in a newly released e-book published by the Cultural Intellectual Association (CIA-Lagos), a non-profit, non-governmental organisation dedicated to promoting creativity in the Nigerian performance arts, visual arts, architecture and urbanism industries. Get the e-book here.