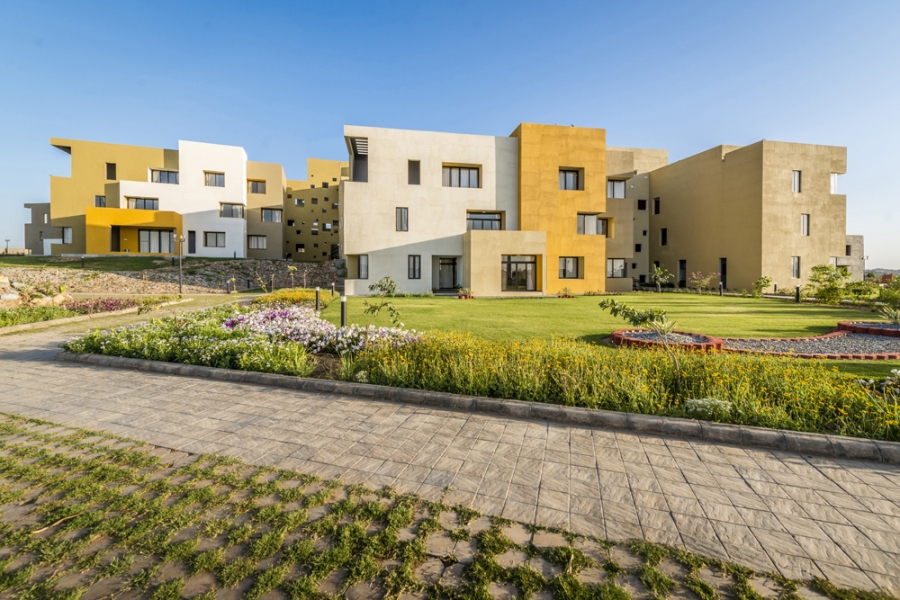 Situated on an undulating site in the deserts of Ras, Rajasthan, India, Studios 18 apartments are a part of an entire layout spread over 36 acres.

With no buildings or development in the vicinity, this layout is being created for the guests and staff of a new cement manufacturing plant that has commenced production nearby. Close to the site there is no existing development and there are four villages at a distance of 1 km from the site. Designed by SanJay Puri Architects, the $1.7 million development which was completed late last year, provides at total of 18 apartments (as the name implies) including 2 bedroom apartments at 139 sqm and 3 bedroom apartments at 152 sqm, each inclusive of sizeable terraces.

Taking a cue from the organic layouts of the neighbouring villages near the site, the residential units are interspersed within the existing contours along organic streets that weave through the site. The 18 number of residential apartments follow the organic nature of old Indian cities with houses stepping back and creating interlocked built volumes across three levels.

A 4M contour difference is negotiated by the building levels stepping down accordingly. In response to the hot arid climate prevalent in the location of 8 months of summer and temperatures in excess of 35°c, the apartments are all oriented towards the north, north east and northwest with no apartment facing the south.

The low rise design allows the residents of studios 18 to be close to the ground level akin to living in individual houses. The circulation spaces are all naturally ventilated with an abstract composition of square punctuations on either side facilitating air to move through and allowing natural light within that creates different patterns at different times of the day. The linear corridors provide a cool ventilated sheltered walkway between the apartments allowing residents to glimpse landscaped spaces on either side while walking through and making the circulation an interesting experience. Each apartment too is cross ventilated with deep recessed windows and open to sky terraces.

Color plays an important role in differentiating volumes as well as identifying circulation spaces interestingly while alluding to the colors of the region. In Rajasthan colour plays an important role in the lives of the people who wear bright colours daily. Most cities in Rajasthan state in India are identified by a colour. Jodhpur in Rajasthan is known as the blue city with traditional homes in hues of blue lime plaster. Jaisalmer is known as the yellow city for its traditional houses being built in yellow sandstone.

Studios 18 is a contextually designed housing project that is sustainable by its design adhering to the existing contours, its orientation to reduce heat gain, its facilitation of natural light and ventilation and its low rise design.

Inside the Kuda Technologies in Lagos by Spazio Ideale Interior Design

5 Tips for Setting Up a Dining Room Bar

Previous
Tiles and Textures: The Latest Trends in Bathroom Design

Next
The Detail in Retail: Watch Episode 6 of RED TV’s “Interiors by Design”