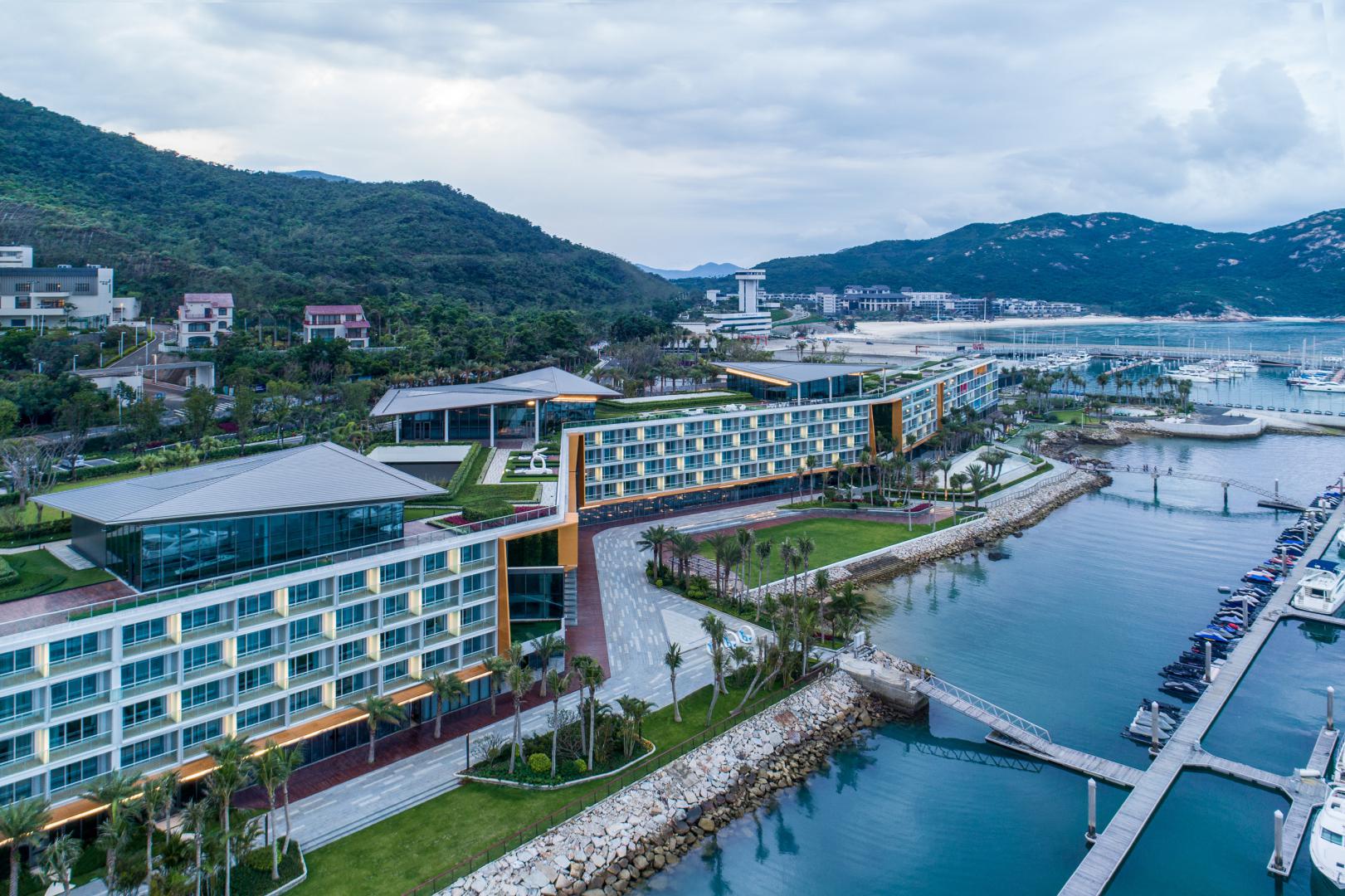 Set on the Dapeng Peninsula, part of the Daya Bay in Nan’ao, Shenzhen, on a narrow strip of land between Daya Bay and the Yashan mountain range, Longcheer Yacht Club, designed by SAOTA was envisioned not just as a new flagship yacht club and hotel, but also as a catalyst to promote yachting culture and encourage public interest in marine sport.

The site, which included existing yacht jetties, has spectacular views of the bay and Daya Islands, and provides some of the best vantage points from which to view the China Cup International Regatta and other prestigious yachting events. Caught between the mountain and the ocean, the building was envisioned as an extension of the landscape, mediating between the mountain and the bay beyond.

The narrow shape of the site, hugging the jagged coastline, and the need to maximise views of the bay informed the long, linear zig-zag shape of the building and its orientation, while its height and emphasis on horizontality was dictated by municipal restrictions that ensure that ocean views from the scenic main road behind the site are not obscured.

The façade of the building was inspired by traditional Chinese lanterns, the concept of the light box multiplied and repeated to create a modular pattern emphasising lightness and transparency, which is particularly effective when seen from the bay at night. An undulating copper-coloured ribbon-like detail feature unifies the façade, delineating the circulation cores and opening up views of the yacht basin.

A series of four rooftop pavilions serve as dedicated entertainment, meeting and reception areas. These lightweight, floating pavilions feature slim, folded, faceted roof shapes, echoing the angularity of the “ribbon” feature on the building’s facade. The large overhangs not only create protected outdoor spaces, but together with the clear expression of their columns involve a contemporary interpretation of some of the defining aspects of traditional Chinese architecture, which also informed the strong axial elements and clear hierarchy of the design.

The building features a highly efficient servicing strategy, whereby it takes deliveries and is serviced entirely from the lower level via four strategic cores that bring services up into the project and disperse them throughout the building via circulation nodes. This arrangement maximises the use of premium space and views on the upper levels. Large light scoops in the roof allows natural light into the lower levels and filter it into the rear rooms.

The landscaping includes two promenades, one above the hotel, creating a public viewing platform from which members of the public can view the yacht races in the bay, and one along the water’s edge in front of the hotel, which is envisioned as forming part of a longer continuous walkway spanning neighbouring properties and contributing generously to the life of the precinct more broadly. The flowing lines, softened edges and terraced layering of the landscaping around the site, contrasting with the angular linearity of the architecture, was inspired by rice field terraces in Yunan. In addition, the landscaped rooftop gardens extend the mountain forest vegetation behind the main road.

The resulting intervention not only creates a new landmark yachting destination and home for the local and international yachting fraternity, but contributes meaningfully to the overall development of the region and the creation of a larger precinct. It’s a luxurious location for the appreciation of one of the eight most beautiful coasts of China.