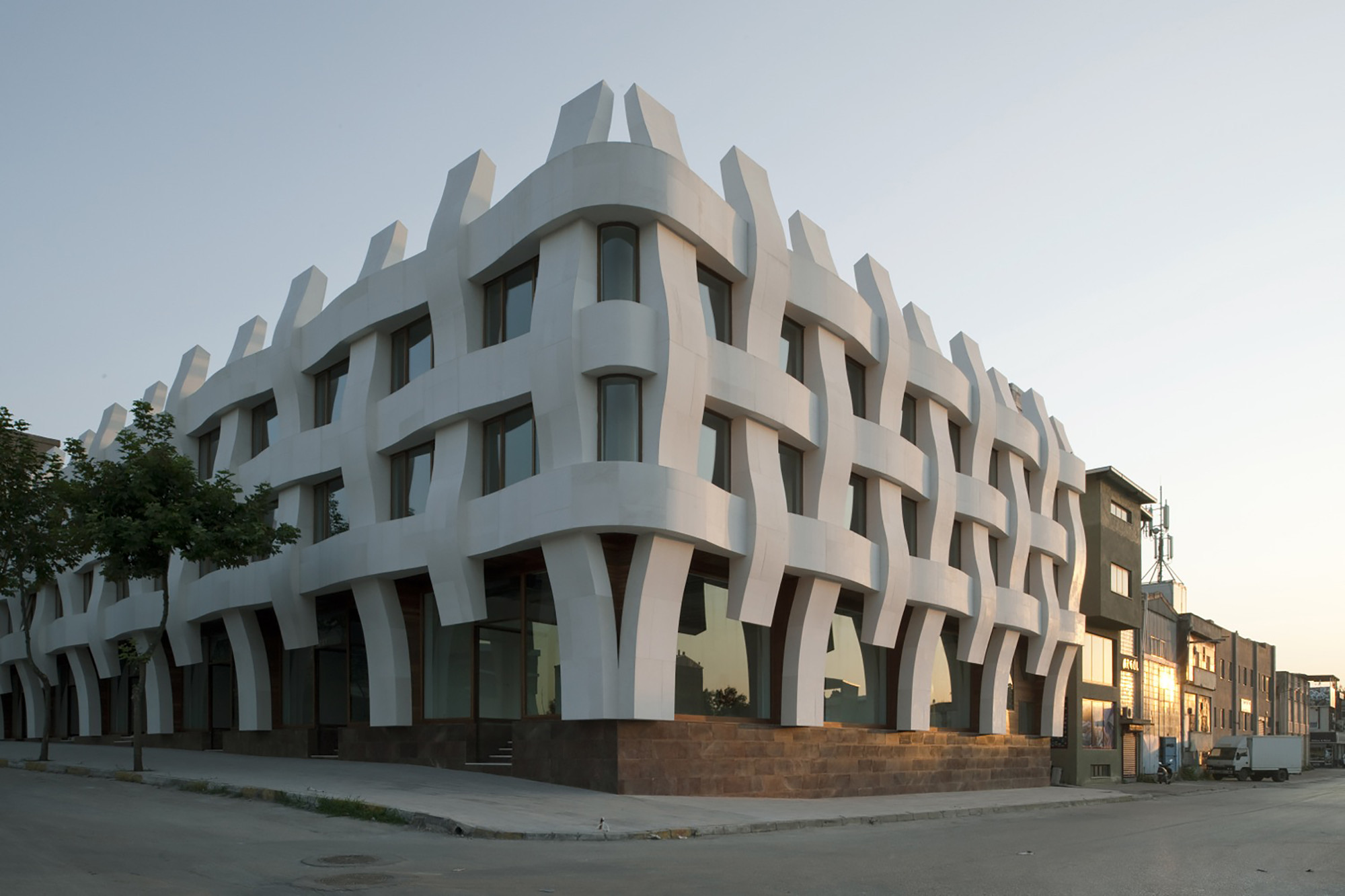 Interwoven: A Detailed Look at the Facade of Argul Weave Building in Turkey Designed by Binna and Smart Architecture

In most cases for commercial architecture, a facade could mean the difference between a captivating eye catching building and just another box taking up space. Its an opportunity to lend character and style to a building.

Though, its one thing to design a fancy facade on paper, but, quite another to bring it to life. This feature from archdaily chronicles the process from design through manufacture to final implementation, of the facade for the Argul weave building, a textile distributor in Bursa, Turkey. The innovative facade was designed by Binaa in collaboration with Korean practice, Smart Architecture. Its a combination of steel and stone, using local skills to bring global design to life. Take a look.

Argul Weave is sited in Bursa Turkey located 100km south of Istanbul in the Asia Minor peninsula. Bursa is home to Turkey’s historic and celebrated textile industry which is witnessing a rebirth to position itself as a regional and international leader. Located on the corner of Koklu Cd and Kirkpinar Cd the project site sits at the center of this manufacturing district and is the first in a planned series of interventions to redevelop the area.

The client is a textile distributor with his existing facility directly adjacent to the East of the project site. From its inception the Argul Weave was planned as a mixed-use development to attract international textile businesses to refocus and rebrand the district as a leading manufacturing textile hub. The Weave is 4,500 SQM distributed over three stories with retail on the ground floor, offices on levels two and three and capped off with a rooftop restaurant.

To satisfy the clients vision the design considered the rich tradition of Turkish textiles and their making through the interweaving of individual threads by giant looms. This motif offered a means to integrate the disparate parts of the project into a singular and coherent whole while making a clear statement as to the importance of this district.

The material palette was kept to a minimum to emphasize the continuity and plasticity of the design. Patara Marble quarried from Burdur, Turkey and fabricated in Afyon forms the sinuous banding of the façade. Dark red marble from the Turkish Aegean region forms the buildings plinth and reddish brown Iroko wood from West Africa clads the inner areas of the weave. As one walks along the façade its undulations create a changing rhythmical pattern that are enhanced by the continuous play of light and shadow evolving throughout the day.

On the interior the Iroko wood of the façade projects in on the ground floor to form fully glazed entry vestibule vitrines creating a warm transition between exterior and interior. Levels two and three are animated by the alternating in and out and up and down of the façade banding that creates a unique and asymmetric view for every window opening. The vertical strands of the façade terminate at the rooftop forming crenellations from between which is a serial framing of the surrounding district and the distant Uludag Mountains that anchor the city.

The designs execution relied on a unique and collaborative process that included a diverse group of team members situated in different regions and continents. Digital technologies were tailored to adapt to local practices for fabrication and construction. Master digital models were used to fine tune and control all geometries and construction assemblies and also used as a means to evaluate costs.

Often time’s constraints from the fabricators were fed back into the model to further tune the geometries and design as required. As in the design the overall process can be conceived as an interwoven collaboration of actors located in distinct geographies. Research, design and execution fed each other in parallel progressions throughout the project that led to the realization of the Argul Weave.

Next
Toyota Home Aichi Puts Together a Home in a Day, Using Prefabricated Pre-Finished Volumetric Construction