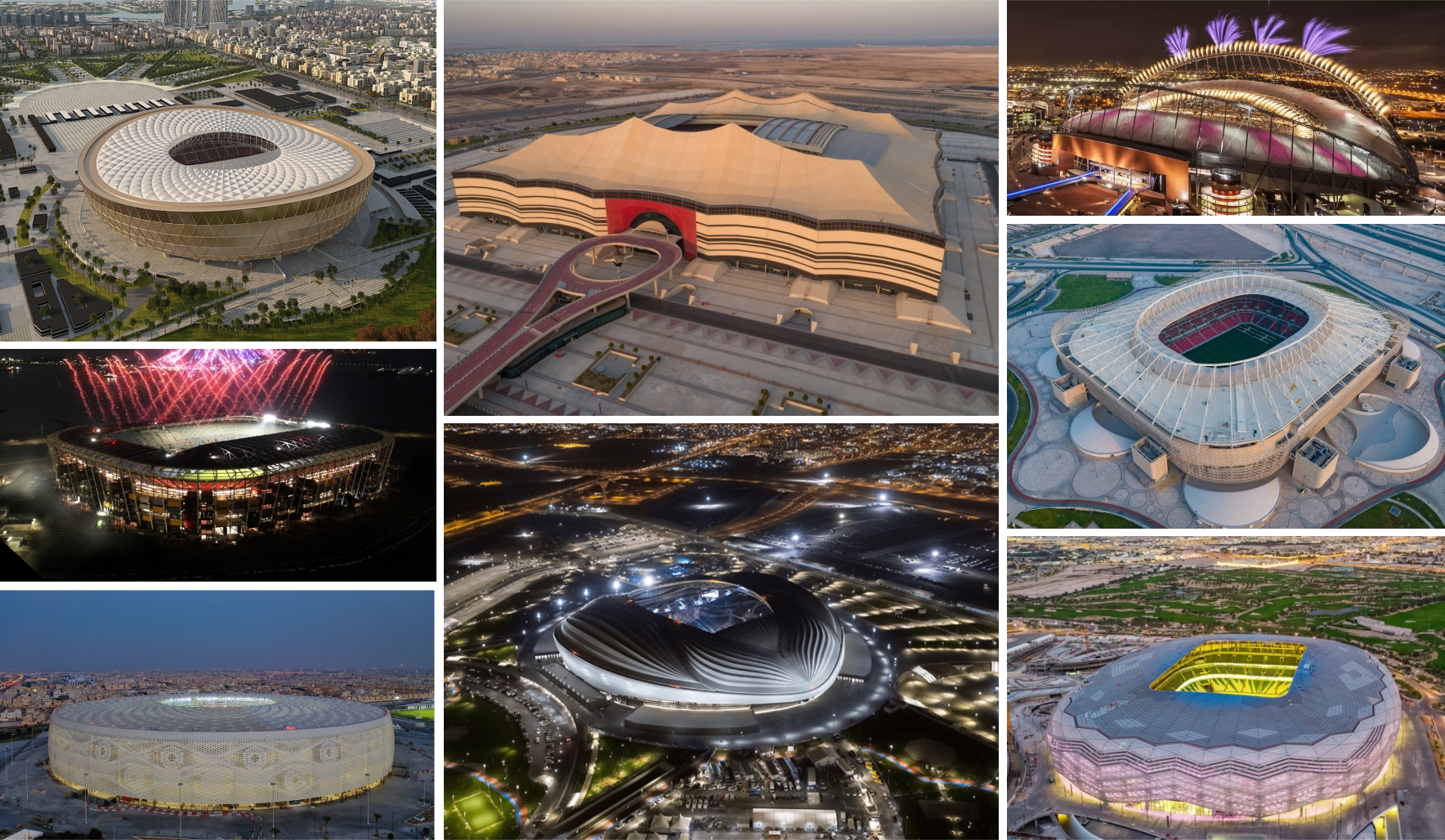 Ever since FIFA announced that Qatar will host the 2022 World Cup back in 2010, preparations on a total of 8 stadiums have been in full force, especially since it will be held in a country with critical climate conditions.

Over a decade of preparations have gone into getting the venues ready for the quadrennial international men’s football championship which is being held in an Arab country for the first time. Here’s a look at the finished stadiums that will play host to the Qatar 2022 FIFA World Cup.

Located 12km south of Doha, Al Thumama stadium’s design weaves Arab culture through its facade, drawing inspiration from the woven patterns of a Gahfiya, the traditional head piece worn by Muslim men in the Arabian region.

In addition to its design, the area surrounding the project explores the importance of ecological and contextual architecture, targeting Global Sustainability Assessment System Trust (GSAS) 4-star certification for both design and construction. The stadium ensures the saving of 40% more fresh water compared to a conventional stadium, using recycled water to irrigate green areas. 50,000 sqm of park area is integrated within the design, using native trees to cover 84% of the landscape. The stadium was inaugurated during the 49th Amir Cup Final on 22 October 2021.

Back in 2013, Zaha Hadid Architects have been selected to work alongside AECOM for the design and construction of Al Janoub Stadium (perviously known as Al Wakrah Stadium).

Built in Al Wakrah, one of the oldest inhabited areas of the south of Doha and nestled within a rich cultural site with profound archeological heritage, the design is inspired by the city’s history of pearl diving, fishing, and traditional dhow boats. The 40,000-seat stadium opened on 16 May 2019, coinciding with the Amir Cup final. After the World Cup, the stadium’s capacity will be reduced to 20,000 attendees, whereas the other 20,000 seats will be donated to football development projects overseas. Hospitality and recreation facilities, as well as a school, event hall, cycling, horse riding, and running tracks are some of the new amenities that are currently being developed alongside the stadium to ensure its use on the long run.

Inspired by traditional nomadic tents, the 60,000-capacity stadium is set to host the opening match of the FIFA World Cup 2022™ and fixtures up until the semi-finals.

Located in the northern city of Al Khor, a city famous for its pearl diving and fishing which has invited desert-dwellers to the coast throughout the years, the stadium’s design honors Qatar’s past and present, highlighting the city’s culture, traditions, and history. Similar to nomad’s tents, the upper tier of the modular design seating is portable, and will be removed following the championship, and given to developing nations in need of sporting infrastructure. The stadium’s design was revealed mid 2014 by the Supreme Committee for Delivery & Legacy (SC) and Aspire Zone Foundation, and was inaugurated early 2020, coinciding with Qatar’s National Sports Day.

Home to one of Qatar’s most celebrated football teams in the city of Al Rayyan, the Ahmad bin Ali stadium celebrates its close-knit community by incorporating symbols of the Qatari culture and traditions.

One of the main design features is the undulating façade, made of patterns that characterize different aspects of the country, such as “the importance of family, the beauty of the desert, the native flora and fauna, as well as local and international trade”. 40,000 fans will be protected via a lightweight canopy and advanced cooling systems, ensuring optimum comfort during the matches. Labeled as the “gateway to the desert”, the stadium opened its doors in December 2020 during the Amir Cup final.

How the Qatar 2022 FIFA World Cup Stadiums are Shaping Up

Situated within a vibrant center of knowledge and innovation, the Education City Stadium is surrounded by academic facilities and sports organizations.

Due to its particular location in Education City, the structure has been carefully designed with a great focus on accessibility. During construction, excavators uncovered rocks that date back 20-30 million years, which forced them to dig 17 meters further down, so the pitch can sit below sea level where temperatures are cooler. The façade features triangular patterns, a reimagination of traditional arabesque patterns, that appear to change color during the day following the sun’s movement across the sky. The design was revealed in 2014, and was complete and open to the public in 2020.

Considered as one of the most innovative stadium designs of all 8 structures, Stadium 974, previously known as Ras Abou Aboud, is inspired by Qatar’s international trade and seafaring.

The number “974” is highly significant for the project as well, as it is the international dialing code for Qatar, as well as the number of shipping containers used in its construction. The structure is located on the shore across Doha’s West Bay skyline. Since it’s mainly made of shipping containers, the 40,000-capacity stadium will be entirely demounted upon completion of the World Cup, and used as a waterfront development for the local community. The stadium was inaugurated on 20 November 2021, via a digital launch.

Built in 1976 in Al Rayyan, the Khalifa International Stadium has long been one of the most notable stadiums, having hosted the Asian Games, the Arabian Gulf Cup and the AFC Asian Cup, among other events.

For this event, the stadium is expanded to accommodate 40,000 fans and equipped with an “innovative cooling technology” that will allow players to compete at a comfortable environment. The structure sees an addition of a single roof to shelter the seating areas, along with a new east wing structure that will host food courts, shops, multi-purpose rooms, VIP lounges, museum, and a health center. The reopening ceremony took place in 2017.

The 80,000-capacity Lusail Stadium, the largest of all 8 structures, will be hosting the FIFA World Cup Qatar 2022™ final. The design is inspired by the interplay of light and shadow seen in the Fanar lantern.

The structural form and façade echo the intricate motifs of art and furniture pieces found across the Arab and Islamic world during early civilizations. Due to its prominent locations in Lusail, a newly built metropolis, the master planning of the stadium features a tram system, and lush green spaces, turning it into a sustainability-focused arena that focuses on human needs and environmental conservation. Once the event is over, it will be transformed into a multi-purpose community hub with schools, shops, cafés, sporting facilities, and health clinics. The stadium was inaugurated end of 2021.

We would be remiss if we didn’t mention the fact that construction of the stadiums were marred by both tragedy and a fair share of controversy. From alleged inhumane labor practices, discrimination against many minorities and questionable safety standards that unfortunately led to the death of over 6500 migrant workers.

A report by the Guardian details how these migrant workers from India, Pakistan, Nepal, Bangladesh and Sri Lanka have died in Qatar since it won the right to host the World Cup 10 years ago. The findings, compiled from government sources, mean an average of 12 migrant workers from these five south Asian nations have died each week since the night in December 2010 when Qatar won the bid.

The committee organising the World Cup in Qatar, when asked about the deaths on stadium projects, said: “We deeply regret all of these tragedies and investigated each incident to ensure lessons were learned. We have always maintained transparency around this issue and dispute inaccurate claims around the number of workers who have died on our projects.”

Read the full article from the Guardian here.

Want to get your project published? Get started here

Next
This Apartment Building in Mexico Maximizes a 300sqm Site to Create A Clever Mix of Compact Living Units.