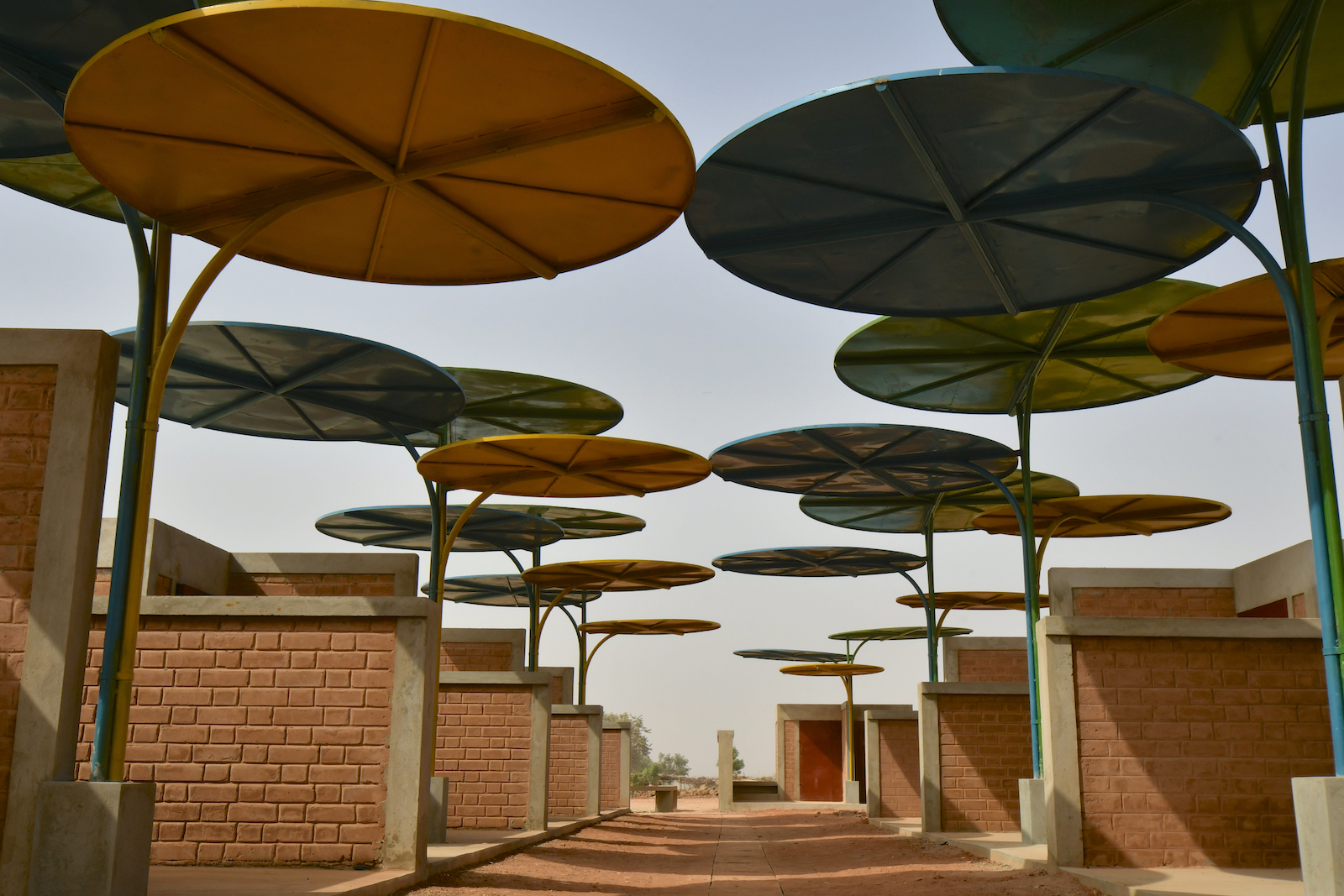 Completed in 2018, the Dandaji Day Market is 7500sqm open air market in the remote village of Dandaji, Niger by Architecture studio Atelier Masomi.

The market was commissioned in response to the growth of the village and features colourful recycled- round metal canopies which shade the 52 enclosed market stalls planned around an ancestral tree. The stalls are made from compressed earth bricks which are a relatively new material in the region as compared to cement or earth-based adobe. The compressed earth bricks ensure the vending spaces of the stalls remain cool in the region’s arid climate.

In rural Niger, markets run on a weekly basis, meaning that individual villages never really develop a local economy. The demographic growth of Dandaji has led it to attempt a turn around by commissioning a permanent daily market. Because the current market is organized around an ancestral tree that has long been an important public space on Market Day, the new project stays on the same site, amplifying an experience the population has come to count on.

The objective was to create an infrastructure that would be visually striking, instill pride in its users, and attract more commerce to the area. Ultimately, an important goal of the project is to create a space that triggers greater confidence and aspirations for the future in the users themselves by offering a dramatic upgrade for this public infrastructure.

The design of the project is kept very simple, using a colorful metal canopy produced by a succession of individual shading structures. It provides solar and thermal protection to the vending spaces underneath. The result is a whimsical world that complements the colorful goods on display while protecting patrons from the scorching sun.

The design shows that modern architecture doesn’t have to be based on a western model, but that regional typologies can be used as a base for moving forward. The project has triggered a lot of pride of place in the community and the market vendors particularly,… They expressed wanting to make sure it stays with them for a long time, which was an unexpected civic response to the design.”

Atelier Masomi in conversation with dezeen

The market is laid out to progressively step down to the old tree, the surroundings of which are formalized to become a real public space with seating and rest spaces for all to gather around. Walking along the shaded lanes, one experiences the simplicity of the compressed-earth brick stalls that contribute to the cooling of the space, while the alternating heights of the shading structures help the airflow throughout.

Next
RL Residence by SDeG is an Aspirational, Urban Family Home in India