Livin Spaces·Dec 15 2014·0
Pristine White Spines and Ribs typify the character of one of today’s most sought after Architects, the man known as Santiago Calatrava.
In one of his most recent ‘sculptures’ (because calling them building would be wrong), the Innovation, Science & Technology Building for Florida Polytechnic University, Calatrava rolls out his repertoire.
Characterised by an arrayed skeletal form, with a latticed building envelope, across a series of arched ribs, the 15 000 sq m oval-shaped structure houses classrooms, auditoriums, faculty offices, research labs and an e-library all crowned with a rising operable roof that can be adapted to regulate the direct light coming through in response to the sun’s daily movement.
This two-Storey, $60 million building sits as the centerpiece and flagship of the Calatrava-designed masterplan for the school’s extended campus. 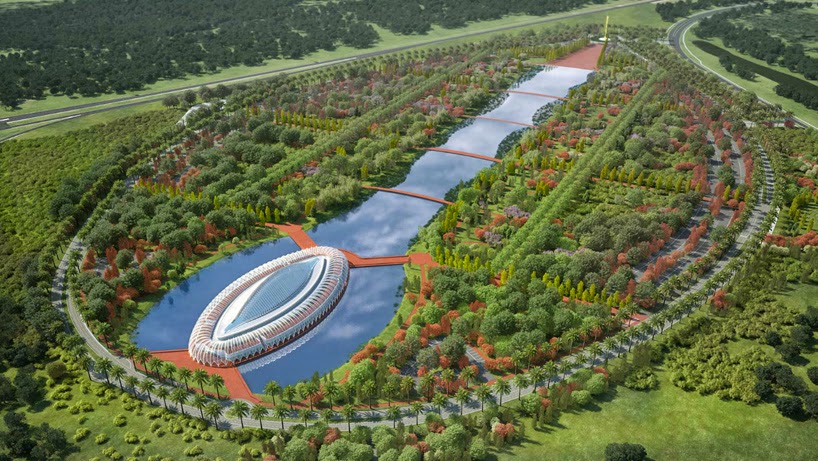 A simple form surrounded by two man made lakes, with four pedestrian bridges connecting it with the surrounding development, the IST building sits pretty as shown above. The layout, see two corridors lining the perimeter of the building on both levels with the ground level corridor opening into classrooms on the outer edge and labs on the inner side.
Arriving the upper floor via either of the two grand staircases at the ends of the oval, the corridor below is replicated here opening to faculty and administrative offices on the outside and conference and study rooms on the inside. It also leads to the functional and architectural heart of the building referred to as “the Commons”. This large room with its soaring ceiling is the location of the aforementioned e-library /study space, which does not feature any tangible books but directs students to e-books and other digital resources made available. The swooping geometry of this room is both calming and inspiring, drawing attention to the complex system of 94 mechanical aluminium louvers on its roof that rise and fall to offer the most effective degree of shading, but still permit plenty of natural light.

Ringed by pergolas, the exterior of the building offers a geometrical progressive drama reminiscent of Mediterranean patterns. They cover and lightly shade a wide walkway on the ground level as well as a terrace on the upper level. The beauty of the building can be enjoyed from any angle, most especially with the reflection seen on the adjacent lakes, that help accentuate and emphasise its form and ability to play with light and shadows.
Self-described as anthropomorphic, Calatrava’s architecture here is dynamic, provocative, not too controversial, and, as always, an ultimate display of the art and craft of masterful architecture.