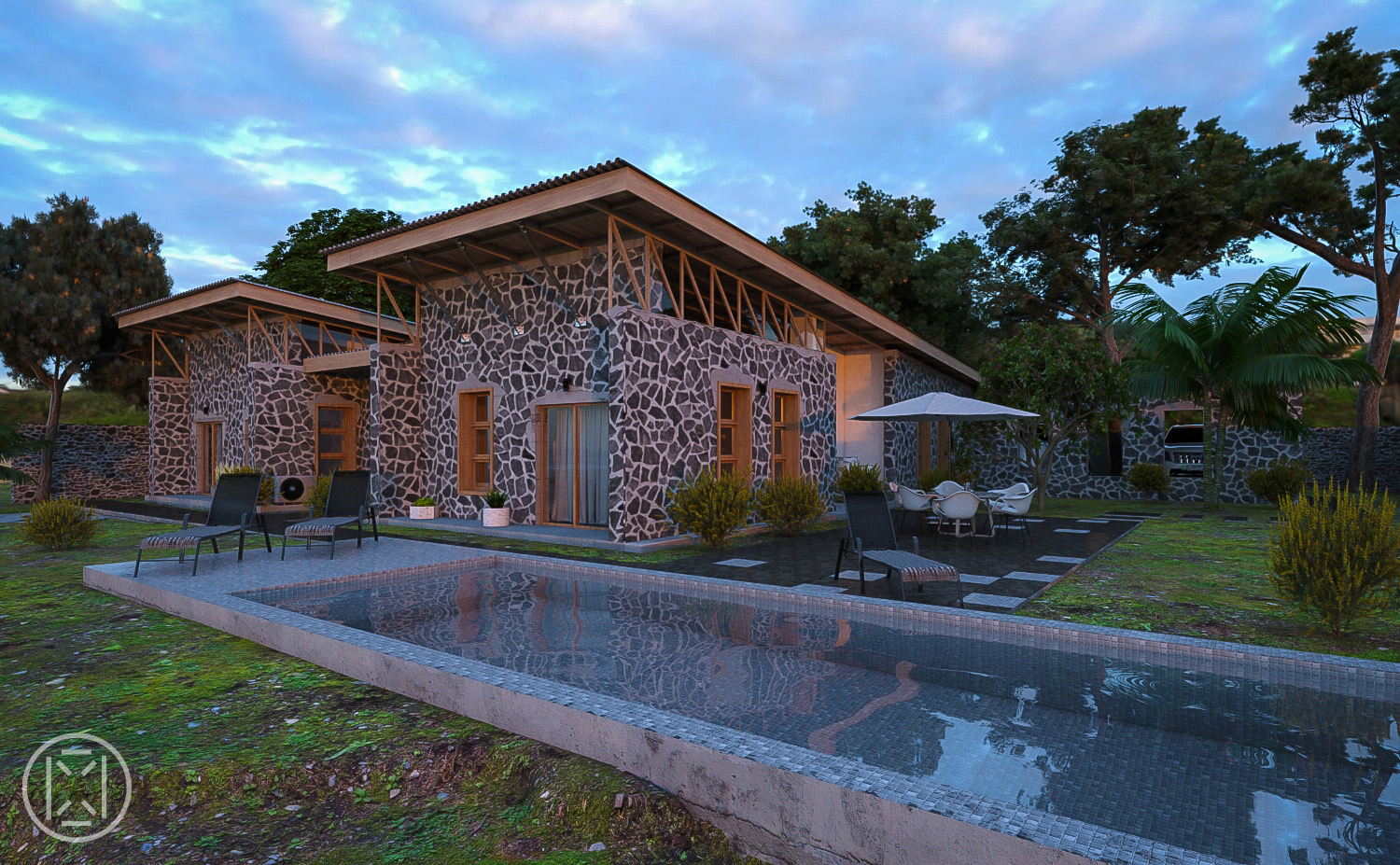 Basabose Studio seeks to define a new vernacular architecture in the Republic of Congo with the Nyiragongo Villa.

Nyiragongo Villa I, designed by Basabose Studio, is the expression of resilience of the city and people of Goma, A city of one million people located on the northern shore of Lake Kivu, in the North Kivu province, DR Congo. Goma lies only 13 to 18 km due south of the crater of the active Nyiragongo Volcano.

On 17 January 2002, after several months of increased seismic and fumarolic activity, a 13km fissure opened in the south flank of the volcano, spreading in a few hours from 2800m to 1550m elevation and reaching the outskirts of the city of Goma. Lava streamed from three spatter cones at the end of the fissure and flowed in a stream 200 to 1000m wide and up to 2m deep through Goma. About 245 people died in the eruption from asphyxiation by carbon dioxide and buildings collapsing due to the lava and earthquakes. At least 15% of Goma comprising 4,500 buildings were destroyed, leaving about 120,000 people homeless.

In 2005, volcanic activity again threatened the city. Currently the scientists at Goma are monitoring Nyiragongo. Mount Nyiragongo did not just bring desolation to the city but left behind a meter-thick layer of lava. A layer that over the years turned into the most common, cheapest and mostly available construction material for the citizens rebuilding their lives one stone at a time. These volcano stones have somehow given the city a distinct identity in ways they are used as foundations or fences.

For the Nyiragongo Villas I and II, we aimed at using this readily available construction material in a way that the city hasn’t learned to use it, yet. Being readily available, for free, to collect across the city, the typical volcano stone of Goma is given a privilege stage to shine as the main material on the project. Using Portland cement made by a local firm that mixes the same Nyiragongo stones, dust and ashes; and wood from locally sourced trees, this is by far our greenest project to date with 95% of materials sourced within 5km radius, with some stones collected on the actual construction site.

The Villa Nyiragongo I is a 200 sqm home for a young family. The first line of the brief was that the house shouldn’t be visible from the street. This breaking the current trend of building vertically in the city. The required spaces and their programmes were spread across the small plot without suffocating it.

The levels of privacy are organized in blocks. The parking and entertainment areas notably the garden and pool are the welcoming non-enclosed block. The lounges, dining and guestroom occupy the first enclosed block with a sliding door leading to the kitchen with its storage room and a family breakfast table which contains another door guiding you into the last block, the most intimate part of the house, containing four bedrooms and three bathrooms.

The circulation between blocks is organized by a continuous linear corridor only interrupted by doors, used as “checkpoints”. The fluidity of circulation is guaranteed by the fact that all the rooms, except the kitchen, individually open to the plot and offering uninterrupted access to the glorious views of the majestic Lake Kivu, on which bank the plot is located. While redefining a new vernacular architecture, the house is a fitting allegory for Goma which would be the phoenix.

Next
Cocoon is a Proposed, Eco-friendly Hotel and Resort in Mexico by DNA Barcelona Architects