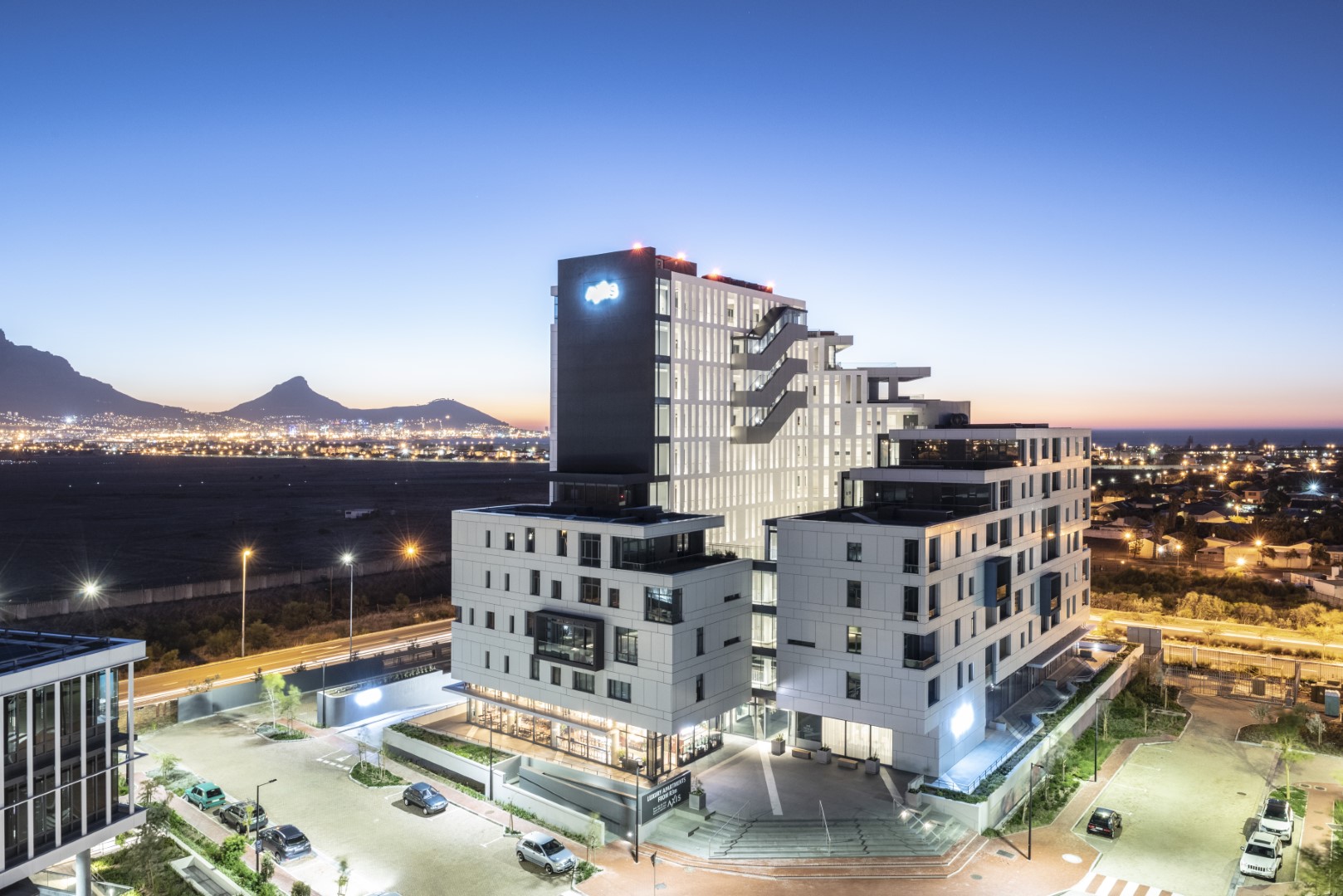 Axis is the latest residential development situated in the vibrant mixed use Bridgeways precinct of Cape Town’s Century City.

Designed by dhk Architects, the apartment building is conceived as a monolith with indentations and cut-outs, featuring 85 luxury residential apartments and penthouses supplemented with small-scale commercial and retail space at ground level. Occupying a prominent corner position in growing suburb Century City in Cape Town, the landmark development has been designed to capitalise on enviable views of Table Mountain and the Atlantic Ocean.

The building connects to the environment in a myriad of strategic ways and sets a precedent for urban conscious residential developments in the city. The compact form of the building wraps around itself and gradually rises, orientating most of the apartments towards views of the city. Its unique doughnut-shaped form is adorned with visual gashes that allow the sheltered walkway spaces to catch glimpses of the city around it, connecting the inside circulation to the outside world. The rising form cuts away, creating dynamic terraces and activity at differing heights, culminating in generous penthouse units.

Transporting every inhabitant on a scenic journey to their destination, a large panoramic lift runs the full height of the building and is positioned at the pinnacle of its mass. A stand-out element of the design, the exterior of the lift is completely clad in red aluminium and sits within a glass shaft facing Table Mountain.

Contributing to the contemporary aesthetic of the building, dhk utilised 2500mm x 1250mm sheets of satin off-white aluminium composite panels (ACP) to wrap the facade. This approach was to clearly define the monolithic appearance with the natural play of sunlight and deep shadows creating the articulation. The panels were bent and pressed to form 20mm cassettes used to create the profile of a large format tiled finish. The cladded panels have been staggered, within 1200mm grid centres, while the building fenestration is equally staggered but on a wholly separate 1800mm grid, creating the complex randomised fenestration appearance.

At the heart of the building is a deep fissure, as a result of the negative space created by the building form wrapping on itself. This deep 30m x 13m space acts as a light chasm that catches the north light and delivers it down to even the lowest floors. At the base, is a courtyard made up of a white-painted face brick fenestration that creates an alternate world inside the building. The rustic textured nature of this area was intentionally designed to complement the smooth, sleek external cladding. A series of transparent glazed commercial and public spaces surround the courtyard which spill out onto landscaped gardens – offering 360-degree views, connecting the internal areas to the outside environment. Inside the courtyard, a highly reflective aluminium material wraps the bottom escape staircase – emulating a mirror and encouraging residents to look up.

Each apartment has been meticulously designed to optimise views, light and to provide a generosity of space that extends to the provision of ample external terraces. High-quality finishes have been specified both internally and externally to ensure the long-lasting beauty of the modish design. A 24-hour concierge in the entrance court completes the exclusive nature of the complex.

The building, named Axis, complements the suburb’s greater urban strategy by creating a series of public, semi-public and private spaces and urban courts – challenging ideas associated with apartment living. A public urban plaza has been introduced as a forecourt and arrival space that is fed by routes along the precinct’s pedestrian network and leads into the building’s courtyard, forming a chasm of sorts.

“Elements of Axis are embedded in abstract narratives paying homage to classic literature; from the crown-shaped crescendo to the ‘three urban courts’, while conversely responding to contentious aspects of the realities of apartment living. For example, the large gestural cuts and gashes in the building offer views of Robben Island, Intaka Island and Tygerberg Hills; allowing for stunning outward views even from the innermost crevices of the building”.

Axis is the latest development in the vibrant mixed-use Bridgeways Precinct in Century City. Other developments in the area include commercial twin developments Sable Park and Bridge Park – both of which were also designed by dhk.