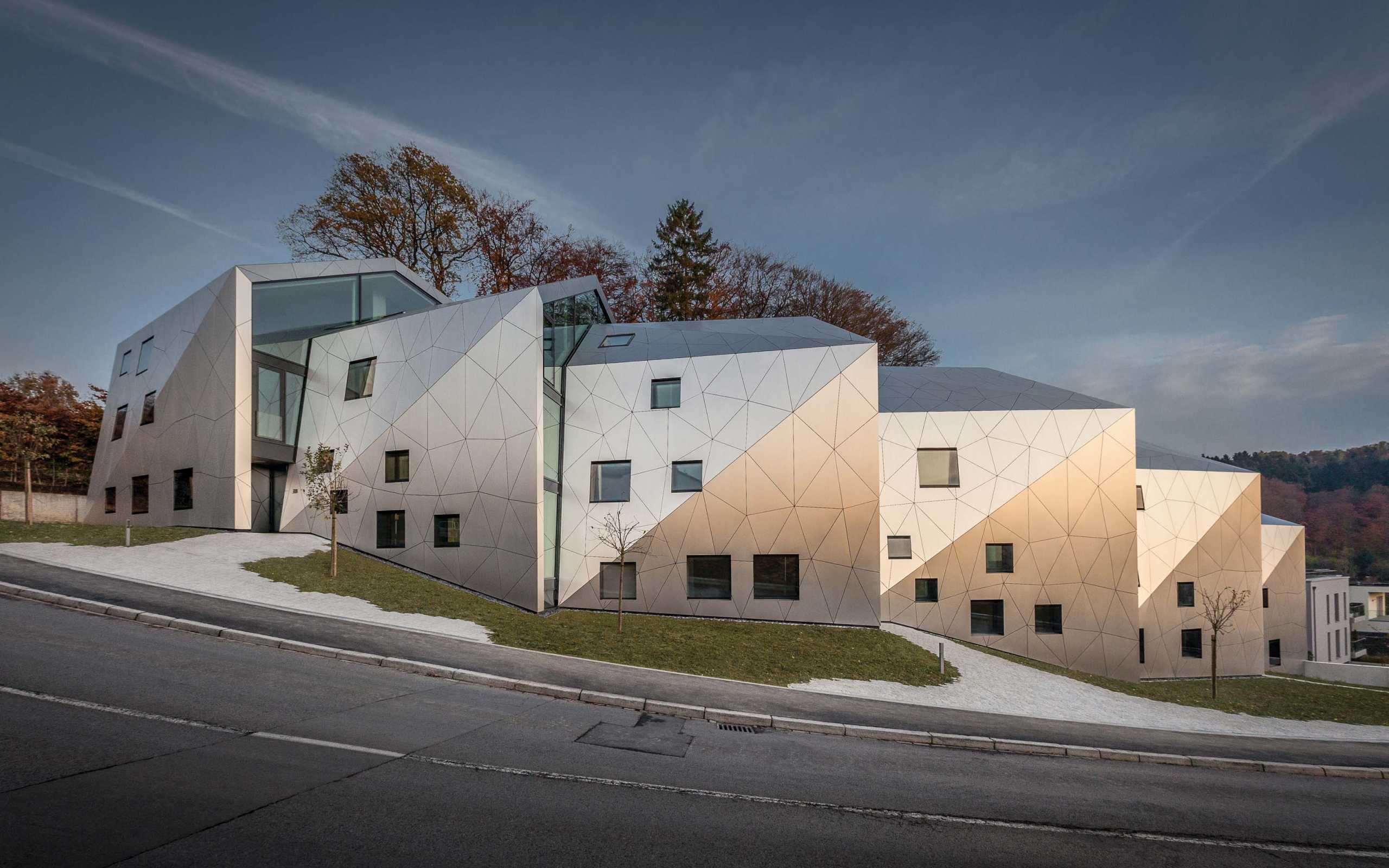 When it comes to housing, one of the main problems people are facing in most urban areas today, often places of constant growth and raising housing demands, is a need to choose an apartment typology over single-family houses not because of their desire, but out of necessity.

Their main concerns can be summed up as following:

In our approach, the idea was to carefully analyze these issues and respond by using them as a base point of transformation into resources, and furthermore into qualities, thus bringing a new vision of a collective housing typology.

According to the municipal building regulations and consent, regardless of the peculiar topography, a priori we would have been allowed to design a simple single-block building, with a 2-story flat basement. However, the surrounding context, specific terrain conditions and form of the plot offered a possibility for different experiment, while at the same time reflecting and responding to the named issues:

1. The plot is situated along a particularly curved street, a very steep topography with 10 meters of difference in height and a preservation of three-century-old trees, classified as national monuments – all of these conditioned the initial shape of the building. Furthermore, the building responds to the specific urban context (small-scaled housing units on one side and large-scale apartment block on the other): it creates a subtle transition by splitting the main volume into six smaller, vertically shifted blocks. In this way, the building is adjusting to its surroundings; it preserves the required density, while nurturing the feeling of belonging, identity, human scale.

Volume splitting and shifting have been carefully studied to respond to a need for natural light, opening the panoramic views towards the landscape and the city and creating the visual contact with the sky, while at the same time allowing for the residents’ privacy.

2. Another response to the privacy issues consists of enhancing the vertical communication, while eliminating long horizontal, often dark and acoustically unfavorable corridors. Three vertical cores connect underground parking directly to the apartments. This solution allowed for the transversal apartment configurations with three-side orientation.

On the other side, our idea was to, apart from offering a privacy when needed, give residents a possibility to meet and get to know each other in a common shared indoor space. The facilities such as common kitchen, leisure room, games – are all designed and intended to bring value by improving social interaction and a sense of community living, on individual voluntary bases, while preserving the privacy and peace of others.

3. Apart from creating the meeting common space that can accommodate common as well as private gatherings, the underground floors offer of a spacious storage for every apartment.

Our overall aspiration was to ‘marry’ current housing needs and issues with specific conditions of the site; to design a collective housing building that offers people a sense of belonging, identity and community.

The building is made of a massive structure of reinforced concrete, faced with a ventilated facade made of triangular aluminum panels. The thermal insulation of the walls consists of mineral fiber. The openings are filled with three-layered glass in an aluminum frame. The large glass elements are specially coated with anti-UV film to prevent the building from overheating.

An important aspect of the energy concept of the building is the orientation; the large openings appear mainly on the south and eastern facades, whereas the north facade is mostly closed. According to Luxembourg laws the building is classified as a low-energy building (Class B-B). A centralized ventilation system as well as solar panels for hot water production are also included in order to optimize the energy efficiency of the project.

The used façade materials have been chosen in order to allow for the minimal maintenance.