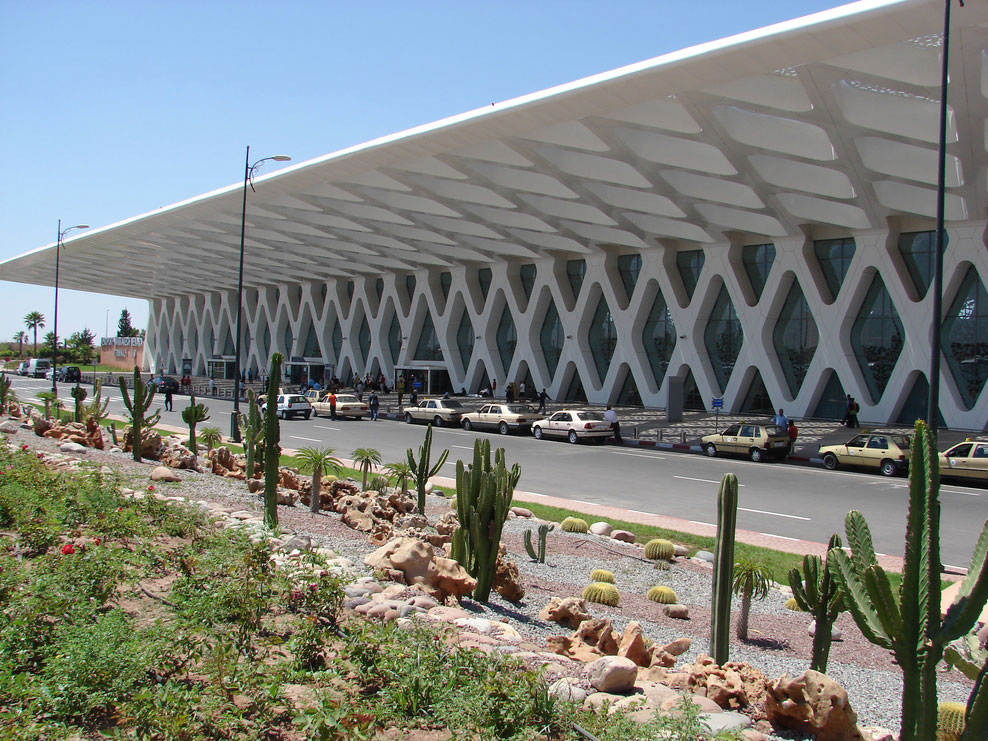 Designed by Casablanca-based Abdellah El Ghari Architects, in collaboration with famous French Architect, Claude Costantini, the International Airport of Marrakech-Menara, serves international flights from and to Europe as well as domestic flights. It is located 6 km southwest of downtown city center and 7km of the Djemaa el-Fna.

The Design of the project is focuses around three main ideas – 1. Combine the contemporary architecture of the airport with Moroccan traditional styles, 2. Develop a friendly and safe functional space, and 3. Implement a new modernity using traditional and today’s materials and techniques. The airport features two terminals, one serving the international flights while the other serves domestic flights. Other spaces incorporated in the project include cafes, a small souk where local crafts are sold, parking for 360 vehicles and services which include a medical centre and a chapel. The architects were commissioned to develop a new terminal extension for the airport. Between 2006 and 2008, the studio developed a 15 300 sqm extension that is probably most notable for its unique and functional facade. Their design presents a space where the light comes in filtered by arabesques that cover the windows and enriches the visual contact between the inside and the outside, a structure that’s reminiscent of typical wire mesh combined with some modern touches.

The facade comprises 24 rhombuses and 3 triangles. The triangles are located above front-doors measuring 12m x 6m. They are clad in white aluminium panels and filled in with glazing that features ancient stylized Islamic ornamental motifs printed on it. This aesthetic is carried into the interior of the development with granite floor tiles and interior columns which continue the rhomboid shape of the whole structure are lined with sheets of plasterboard and in some cases combined with wood. Even the sofas and armchairs in the rest areas are decorated with fabrics of a similar style, native to the region.

Another notable feature of the development would be the roof. The steel roof features a 24 m cantilever the shades the facade as well as the drop off and entry areas. The cantilever also carries photovoltaic pyramids, as well as skylights that wear a similar pattern to the previously mentioned arabesques. These motifs and patterns not only lend traditional character to the building but also help to mask contemporary technology and utilities so most travelers are none the wiser.