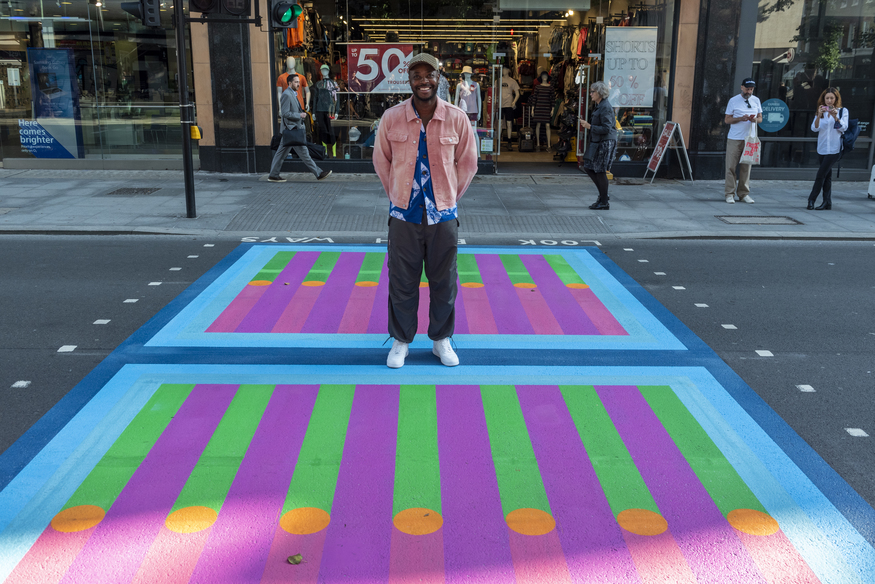 *** FREE FOR EDITORIAL USE *** Artist Yinka Ilori unveils his bright and lively street art designs on Tottenham Court Road titled Bring London Together, part of London Design Festival, supported by Bloomberg. The activation is the latest instalment of the Mayors Lets Do London recovery campaign  the largest domestic tourism campaign the capital has ever seen.
NEWS

As reported by Archinect, The Design Museum in London is set to host a new exhibition by British-Nigerian designer Yinka Ilori. The London-based artist, whose work includes the acclaimed 2019 Dulwich Pavilion The Colour Palace, will populate the display with installations, patterns, and graphics to create a “joyful and playful experience.”

Ilori drew critical acclaim for this 2019 Dulwich Pavilion, which he built in collaboration with London-based architecture firm Pricegore. The scheme was designed with inspiration from the markets of Lagos, Nigeria, whose colorful textiles were translated into what Guardian critic Oliver Wainwright called a “spectacular temple of colour.”

“Yinka Ilori enlivens the public realm with installations and murals in a playful combination of colour and pattern,…This display will bring to the museum his distinctive aesthetic, inspired by the African fabrics of his childhood and capturing the colourful geometric patterns that feature in Nigerian design, with a nod to British postmodernism.”

The pavilion was one of two works by Ilori for the 2019 London Festival of Architecture, the other being a colorful installation within London’s Thessaly Road railway station. The work, titled “Happy Street,” created an inviting environment underneath a bridge using durable, low-cost materials.

More recently, Ilori took part in the Asphalt Art Initiative’s Bring London Together project, where the artist’s signature bold play with color was brought to the streets of London in the form of painted murals on street surfaces. London Mayor Sadiq Khan described the scheme as one that can “prove once again that the desire for safer, more welcoming, and more beautiful streetscapes is universal.”

Ilori’s free exhibition at the Design Museum will run from September 15th through June 25th, 2023.

Next
Stack Restaurant & Bar Makes a Case for Reuse and Recycling