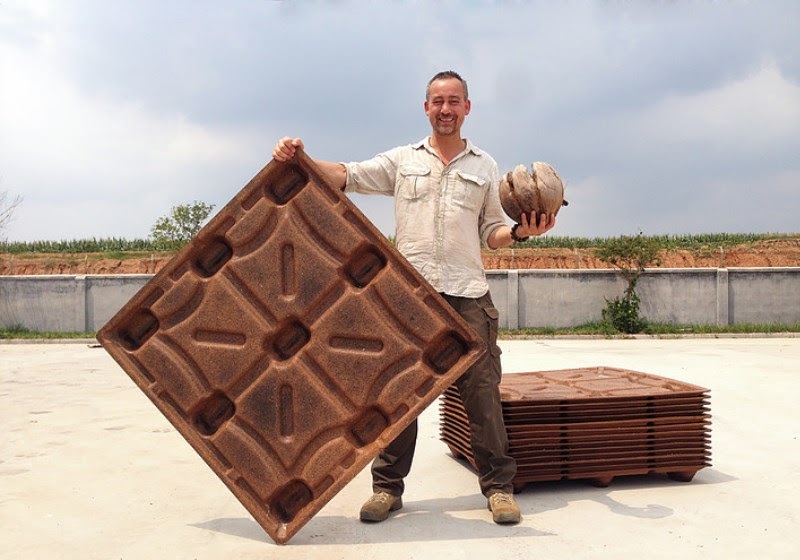 CocoPallet Recycles Coconut Waste into Pallets as an Alternative to Wood

CocoPallet, developed by a dutch startup of the same name, is an affordable, fire resistant, sustainable, 100% bio-based export compliant pallet made from coconut waste.

Targeted at Asian exporters who currently use 1.7 billion wooden pallets per year, (causing 170 million trees to be harvested), CocoPallet saves millions of trees, heavily reducing the carbon footprint while paying farmers for their waste and saving costs for customers. The company was awarded the Waste & Water track prize of €15K sponsored by Sycomore Asset Management back in 2016.

The process used by CocoPallet is actually cheaper than using wood, and the design is more practical and durable as well. It is estimated that the company saves roughly 200 million trees from being cut down every year since shipping pallets are used everywhere. The technology was initially explored and developed by Jan Van Dam, a plant scientist at Wageningen University but was later commercialized by Michiel Vos, founder of CocoPallet. You can read more about the origins of the idea here.

“Asia produces more than a billion pallets every year. They require softwood, which does not grow in the tropics, thus is imported from Canada, New Zealand or Eastern Europe on a large scale. Complete forests are being shipped to Asia to make pallets, that are mainly used to ship products back to America or Europe. It is clearly a lot more efficient to make them in Asia with local materials,…CocoPallets have important advantages: they are stronger and lighter than the old-fashioned pallets, they are fire retardant, and thanks to an adjusted design, also easier to stack, so they take up less space. Above all, they are cheaper, and a lower price is always the best sales argument for a sustainable product,”

Previous
The Yemisi Shyllon Museum Of Art (YSMA) will be the First Legacy Museum in Nigeria.