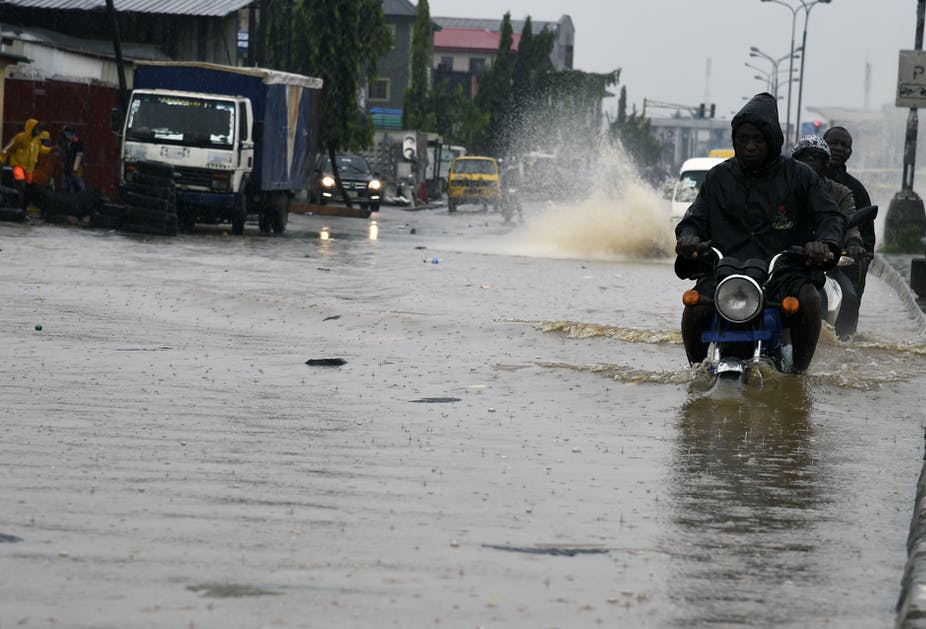 Lagos is getting less rain, but more heavy storms. What it can do to prepare? A Thought Piece by Nelson Odume

In this article originally published on The Conversation, Nigerian Researcher at Rhodes University, Nelson Odume, examines the changing rainfall patterns in Africa’s most populous city, citing its vulnerabilities, the risks faced by its inhabitants, what the government needs to do and what Lagosians can do to prepare.

Lagos State can expect to experience 270 days of rainfall in 2020. Many Lagosians who suffered from the 2012 and 2017 devastating flooding are wondering whether this is usual or not.

What have been the notable rainfall patterns in Lagos over the last 60 years?

When one looks at the average annual rainfall received from 1960 – 2010, there is a gradual decrease in rainfall amount.

Also, from 1960 – 2010, on average, rainfall in Lagos began in late March, peaked in June and then ended in October. But there was a shifting rainfall events from the months of May, June, July to the months of August, September and October. The second peaking of rainfall happened in September.

So, where do the risks lie for people living in the city?

While the amount of rainfall has been decreasing in Lagos, the frequency and intensity of extreme whether events are on the rise. So, the risk is not much about the annual rainfall amount, but its distribution and intensity when it happens.

These are not entirely new. For example, on June 17, 2004, Victoria Island received rainfall amount of about 243 mm (78% of the month’s rainfall), causing devastating flooding. More recently, intense precipitations are happening more frequently in the months of June, July and September, increasing the risk of flooding.

What are the biggest weather risks faced by people in the city?

The risk is the growing 1-5 day extreme rainfall events, which have been predicted to increase in Lagos State. It is these extreme precipitation events that Lagosians should be more worried about.

Apart from extreme rainfall, storm surges are also predicted to rise in Lagos. These are also not entirely new. For example, on August 17, 1995 Victoria Island suffered from a devastating storm surge that destroyed properties worth billions of Naira.

What makes Lagos so vulnerable?

Lagos is bordered in the south by the Atlantic Ocean, in the east and southwest by lagoons and creeks. The relative position of Lagos, being a coastal city, makes it very vulnerable to coastal flooding and coastal erosion as a result of sea level rise. It is predicted that Lagos could experience about 12-17 cm sea level rise by 2050. This could increase coastal flooding because Lagos topography is flat and only about 0-5 m above sea level. In addition, sea level rise would increase coastal erosion and saltwater intrusion into groundwater. This would make the city’s groundwater salty and would increase treatment costs.

Another factor that makes Lagos more vulnerable is that about 90% of Lagos is already built up. What this means is that land surfaces are covered with buildings, roofs, concrete and roads. These materials are largely impermeable. The natural soil and vegetation, which usually retain rainwater and make it to flow slowly, are removed giving way to materials that do not hold rainwater.

The implication is that when it rains, water is quickly collected into adjacent rivers, and these rivers easily become overwhelmed, leading to flooding. Because of the increased run-off, river channels can become modified, which can also increase the risk of flooding.

Insufficient drainage system and solid waste collection, illegal dumps, unplanned building on flood prone areas such as wetlands, as well as high population density are all contributing to flooding in Lagos.

What are government’s responsibilities?

First, Lagos state government needs to strengthen its capacity for evidence-based decision making. The scientific community (researchers), practitioners and political class must work closely together so that decisions are informed by up to date scientific analysis. And the science must be informed by on the ground challenges.

Second, Lagos state government should embark on structural measures such as the construction of dikes, embankment and seawalls to minimise the risk of flooding in the city. The clearing of waterways, channels and drainage systems as well as efficient solid waste collection system would also help. And there are structural steps that could be taken such as building design codes that promote the use of permeable pavement as well as infiltration trenches.

Fourth, land use planning and protection of ecosystems hold promise for mitigating risk. Lagos state government must continue to strengthen compliance and enforcement about land use planning, ensuring that developments are prohibited in flood prone areas, and sensitive ecosystems such as wetlands.

Finally, without adequate involvement of local communities, including local knowledge systems, the above measures would likely fail due to a lack of sense of ownership by the people. Therefore, Lagos state must also continue to strengthen its capacity to work with local communities and diverse stakeholders in addressing flooding risk within the city.

What should Lagosians do to prepare for the rainy season?

They must join government efforts to reduce the effects of flooding in the city. One way every person can do this is to avoid indiscriminate dumping of wastes on waterways, water channels and wetlands.

Lagosians can also form voluntary community-based organisations whose aims are to sensitise local people on the importance of keeping the drainage clean and liaising with relevant government authorities for effective communication of risk.

Finally, the threat of flooding in Lagos is an opportunity to look in the direction of nature-based solutions such as creating green spaces and protection of wetlands. These will mitigate the devastating effects of flooding. They can also help create jobs through recreation and tourism, conserve ecosystems and storing carbon.

This article is republished from The Conversation under a Creative Commons license. Read the original article.

Dr Oghenekaro Nelson Odume is a Senior Researcher and Director of the Unilever Centre for Environmental Water Quality within the Institute for Water Research at Rhodes University. He holds a BSc (Hons) degree from the Delta State University, Abraka, Nigeria and an MSc and PhD degrees in Water Resource Science from Rhodes University. He has over 9 years research experience in the field of water resource management with interest in social-ecological systems, applied ecology, water quality and pollution management, ecosystem management, environmental ethics, and transdisciplinary water science in the context of social-ecological systems.

His research has received local and international awards, including the Emerging River Professional Award by the International RiverFoundation, Australia and the Bronze Medal Award by the Southern Africa Society of Aquatic Scientists in recognition of his contribution to water quality management in South Africa.