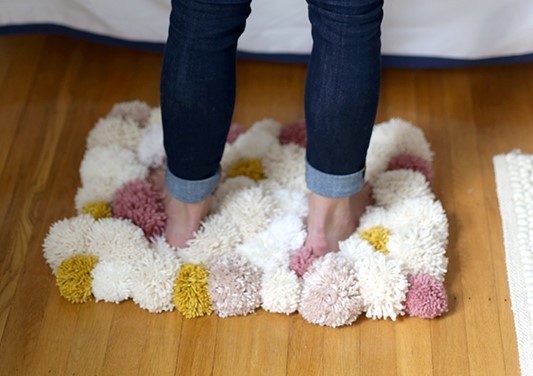 DIY: Use Some Wool Yarn to Make This Fluffy Pom Pom Rug

Originally published on say yes, this DIY project turns rolls of colourful wool yarn into a fluffy and fun bedside, pom pom rug, perfect for a nursery or children’s bedroom.

Mother of two, Liz Stanley takes us on a step by step journey of how she crafted the pom pom rug for her children’s room. Her intent was to make something soft to stand on while soothing her baby daughter in her crib when she got up in the middle of the night, plus add a feminine touch to the space using few pops of pink and yellow. You can see the full, original post here. Here’s how to get started,

Stick your fingers into the rolls and start wrapping the yarn around both.

Keep going until it looks about this size or even larger. Our rolls were so squished because they had been used a lot but yours might not get as squished at first. The sizes will differ but that’s okay! We liked the look of the rug to have different size pom poms. This one above was for a smaller pom pom, the rolls below are for a larger one.

Cut another piece of string and weave it through both of the rolls so it wraps around the whole thing.

Tie once, then pull the rolls out

Now tie even tighter with the rolls out. Make a knot. But leave the long strings, don’t snip them. You’ll need them to tie the pom pom to the rug mat.

Now with your scissors snip through the loops around the whole pom pom. You’ll also need to trim to they’re about the same length. But don’t get too ocd about it. You could sit there snipping forever if you wanted.

Now keep going! Each pom pom took us about 5 minutes so put on a movie or two and relax!

Now you’ll start to place them on the non stop mat to decide on what design you want. You need them to be really squished together so after placing them you might find out you need to make more. We needed about 50 for our rug, which was pretty small.

Tie them on using the long string you’ve left hanging (you did leave those strings, didn’t you??? Oh good). We used slip knots so that we could move them around if we decided we needed to. Or if we got sick of the rug and wanted to use the pom poms for another project. That’s it!

Next
Istakagrha (Brick House) in Jakarta by Raw Architecture is a Compact, Sustainable Home with an Intricate Brick Facade