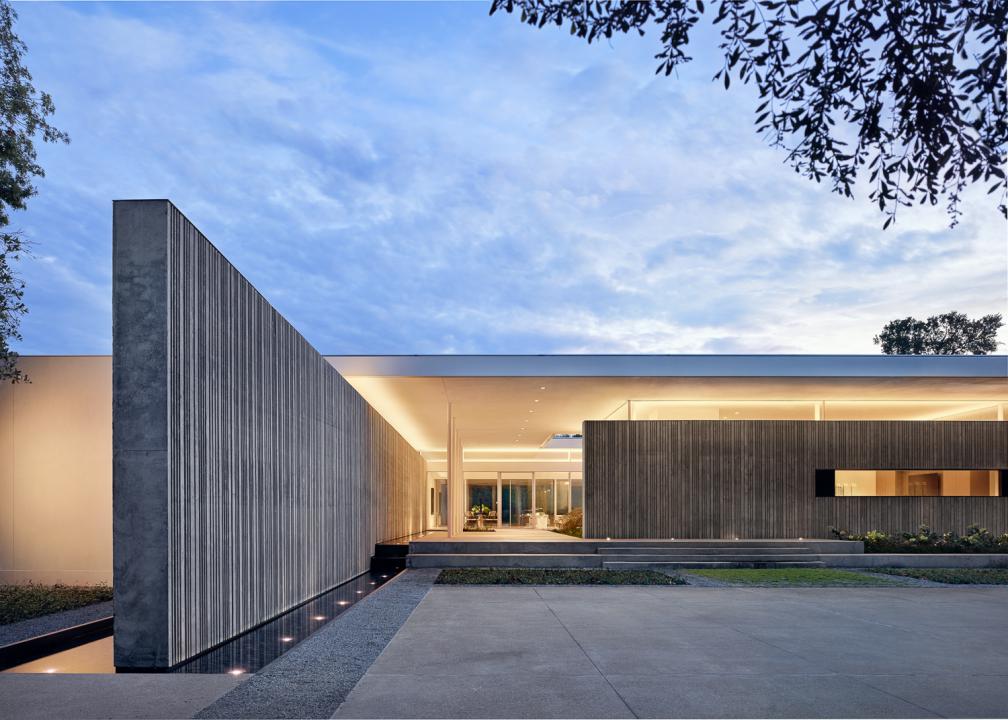 The Preston Hollow Home in Texas by Specht Architects Ushers in a New Era of Brutalist Architecture.

The design of the Preston Hollow Home by Specht Architects was driven by the desire to blur the lines between inside and outside while providing a sense of privacy and seclusion from the street and surrounding neighborhood, at the homeowners request.

The 743 sqm scheme located in Preston Hollow neighborhood of Dallas, Texas is influenced by strategies common to classic Dallas modern homes of the 1950’s and ‘60’s. These strategies which had faded for decades are now experiencing a resurgence. These homes were usually located on sites that were urban, relatively dense and close to the city center. As such they drove a unique residential architecture with shaded and screened living spaces that are inward-looking and private.

Heavy cast-concrete walls extend from the interior of the house out into the landscape, breaking the “modern box” and creating courtyards that allow for a bright, nature-filled view from every room.  This effect is complemented by the huge glass walls that define each space.

The home’s design and build represents the resurgence of  brutalist architecture —  popular in Dallas in the 60s.

A large, floating, pavilion roof hovers over both the interior and exterior rooms, defining a special “living precinct” in the site and further fragmenting the boundary between interior and exterior.  The roof shape and large cantilevered overhangs were carefully configured to provide complete shading from the harsh Dallas sun at all times of day.  An “Impluvium” or opening in the center of the roof is modeled on those found in traditional Roman houses and allows rainwater and light to reach the garden below.

Flowing water plays a large part in the design as well.  Beginning at the entry, a narrow channel courses through the site and to the pool beyond. The stream is punctuated by a series of cascading terraces and a gentle waterfall near the main entry. At night, lighting within the water casts changing patterns on the adjacent textured concrete surfaces.

The concrete walls in the Preston Hollow house were cast using custom-fabricated formwork that creates a corrugated appearance.

“This technique, a staple of brutalist architecture from the 1960’s and ‘70’s creates a play of shadows and pattern that changes throughout the day.  Unlike the brutalist work from that era, however, the heavy walls here are countered by delicate steel columns, thin window frames, and the hovering cantilevered edges of the roof.  The concrete is a grounding element that provides a contrast to the overall lightness of the spaces,” .

Dallas has a long tradition of modern architecture that faded for decades and is now experiencing a resurgence.  The home sites of Central Dallas, which are urban, relatively dense, and close to the city center, have driven a unique residential architecture with shaded and screened living spaces that are inward-looking and private.  The Preston Hollow house refers to examples such as Edward Durell Stone’s 1959 Oak Court house, with its outdoor covered dining room surrounded by water, and Philip Johnson’s 1963 Beck Residence with its tree-filled inner courtyards.

The design for this house is organized around eliminating direct solar gain while still allowing for expansive views.  The large pavilion roof and cantilevered roof overhangs were modeled to provide complete passive shading from the harsh Dallas sun at all times of day. In addition, the entire west façade has no openings at all. Large operable areas of glazing allow for extensive natural ventilation during appropriate seasons. The “Impluvium” allows rainwater to reach the courtyard garden and water collection area below.  This rainwater is used for irrigation and other non-potable uses.