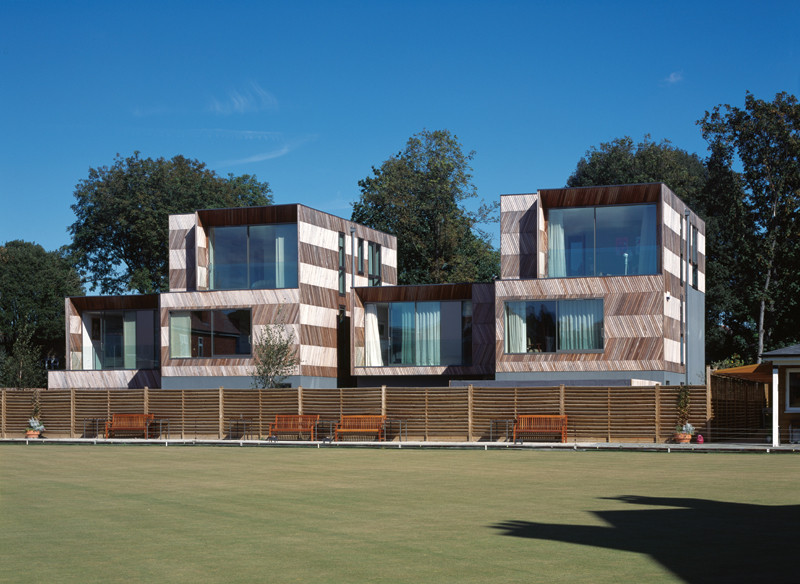 The Herringbone House in London by Alison Brooks Architects

Each open-plan house is composed of two continuous planes of herringbone timber and graphite render surfaces that form walls, floors, external decking and fences. These planes interlock and fold inward at the centre of the house to create a double height entrance hall open to the sky. This approach to the wrapping of spaces generates an apparent lightness to the houses which are conceived as an assembly of planar elements as opposed to “punched” masonry. The atrium holds a suspended timber staircase and galleries which lead to the first and second floor bedrooms. Each house has a two car carport that has been integrated into the design of the house, fence and landscape with pebbled roofs on expanded metal trays supported by stainless steel ‘picture frames’.

The 3 storey 5 bedroom houses have full basements with storage, guest accommodation and a games room. The ground floor is conceived as an open plan living, family and kitchen area wrapped around a central double height hall open to the sky with a 3x2m roof light. The hall is a double height atrium at the centre of the house with a sculptural oak staircase hanging in the middle of the space. The first floor bedrooms are accessed from a gallery space and library with a balcony offering views down into the living space.

The three principle bedrooms are on the west facing façade with large windows that maximise passive solar gain and offer fantastic views out over the bowling green. All of the bedrooms have windows on both sides to allow natural ventilation of the spaces and maximise the light and views. The living rooms are recessed behind deep overhangs that provide shade, direct views to the south-east and shelter the ground floor entrance areas. Adjacent to these are the three storey volumes oriented north south, containing bedrooms and family rooms. These elements also have recessed glazing at the 2nd floor level to reduce solar gain, increase a sense of privacy for the occupants and create space for greenery at the buildings’ upper levels.

The ground floor living spaces have been designed in order to create a free flowing space from inside to outside with level thresholds opening out to generous terraces.

The house is constructed from a steel frame with timber infill that has been wrapped in plywood sheathing. This acts as a substrate for the insulation and cladding. The herringbone cladding was initially developed and set out using 3d modelling software to establish the dimension of each board and to test the final visual effect. After trials with different lengths of board and widths it was decided to us a thin board profile (50mm) and that the boards should be 800mm long, a dimension that worked functionally for the construction and fitted into the structural levels of the house.

The cladding is essentially a traditional open weatherboard construction. The house is initially wrapped in Tyvek breather paper over the rigid insulation. Battens were set out at 800mm horizontal centres and the IPE cladding was all pre-cut to 800mm lengths with pre-drilled holes to speed up the installation and accuracy of the construction process. At our request the contractor constructed a 1:1 mock-up to test the construction of the façade and each stage of the installation was signed off by the architects before proceeding.

This enabled us to maintain a tight control over the building finish. Following the installation of the boards each board was pelleted and sanded before sign off.

Across the façade all materials – timber, render and glass are in the same plane. This was done to further enhance the abstract planar quality of the façade. The windows sit on steel angles and are strapped back to the window heads and jams, meaning that they can be positioned flush with the timber, like holes cut out of in a thin surface.

Given the automation of the process and simplicity of the traditional construction method this delicate and refined façade took no longer and cost no more than a standard horizontal weatherboarding system. Yet the result is a distinctive façade with an optical ‘accordion’ effect and with the refinement of a piece of renaissance marquetry.

Previous
Sign Up to Participate in the Lagos Architects Forum 2017