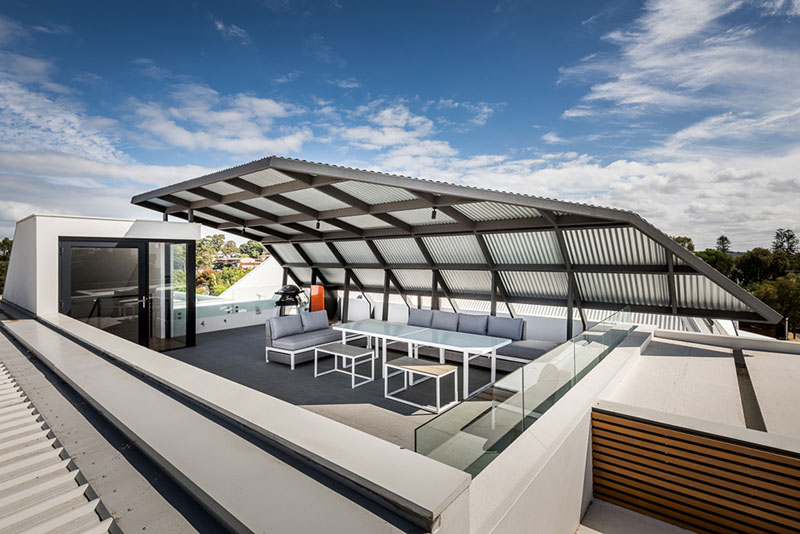 Located in Perth, Australia, the Claremont Residence designed by Keen Architecture fullfils a brief for a busy couple seeking a low-maintenance home that offers modern design and privacy. Situated on a centre plot in a row of three, the site had its challenges but offered an opportunity for the architects to create something responsive and unique.

The client wanted a house to entertain friends and family whilst having the ability ‘lock and leave’ it with his busy lifestyle. In terms of an investment, he also wanted to maximise the sites yield so we worked extensively with the adjoining neighbours and council to push the envelope.

What evolved is a house that looks inwards to the outdoors. A central courtyard allows north light to flood into the the heart of the home and creates a core where both the kitchen lounge area spill outside via bi-fold doors. All the living spaces become one harmonious open space.

As a feature, we hand selected the deciduous Bradford Pear to be a focal centrepiece of the house and soften the crisp modern form. The double storey north facing glass link connecting the two areas soaks up the sun and warmth and spreads it throughout the house. The tinted glass also  bounces a soft light back on to the adjoining two storey wall to brighten up a potentially dark southern wall.


To the street, a feature timber screened balcony off the master suite dramatically punches though the steel portal frame. The timber box has built in bi-folds which open to views of Claremont but can also be a private retreat.

The dramatic flying roof form provides shade to the ‘entertainers delight’, a large open roof deck (engineered to take a future spa) which takes full advantage of river views to the south, the City to the east and hints at the ocean beyond the Norfolk Pines to the west.

Next
Everblock, The Modulare Building Block that can Build Almost Anything