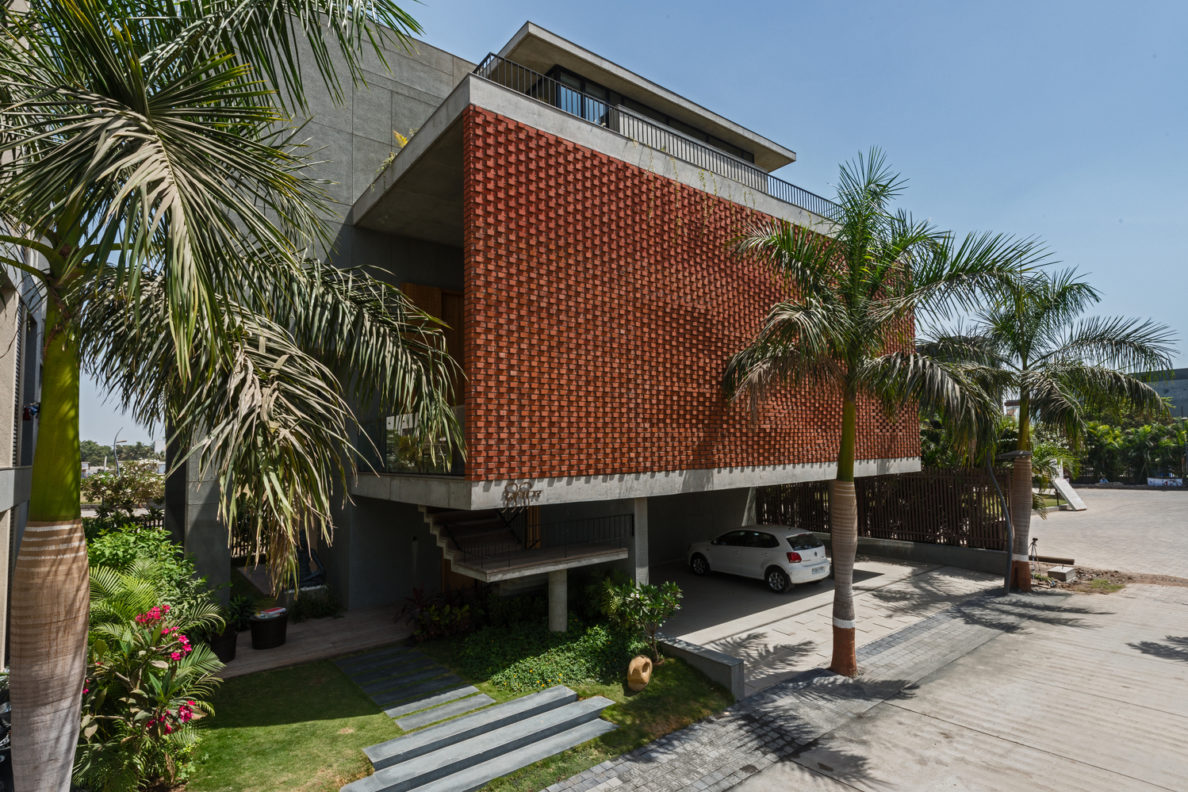 The Brick Curtain House is tropical family home in the Indian port city of Surat, which features a unique undulating brick facade that is able to shade itself and serves as the visual focal point of the home.

Designed by Indian architects, Design Work Group, the brick curtain house is a response to a unique climatic challenge that required the passive cooling of large surface areas which make up the west facing front facade of the building. After testing a number of potential interventions, the idea of undulating bricks or a ‘brick curtain’ stood out as the most efficient solution.

Aside from its functional attributes, the ‘brick curtain’ also helps to embellish the adjacent, plain concrete walls on the exterior and serves as a reference point for the home’s natural-coloured finishes and wooden furniture as well as the the marble flooring. Below is a detailed description of the design and thought process from architects,

India is a home to an extraordinary variety of climatic regions. The site being located in Surat, Gujarat falls into hot and humid climatic zone. High humidity, strong sun and glare from sky characterize the climate. Our client having a family of 5, Mr Kanji bhai Bhalala is a public figure whose only purpose is to serve the mankind and be in constant touch with people in the neighbourhood and visitors throughout the day.

The site is a part of Residential society a corner plot approached from road on the west edge. The layout was organised such that the private zone were at the inner side and public zone in the front facilitated by a centralised connecting services.

On the ground, the front occupies parking while the rear consists of servant room and a multi-purpose hall that connects with the outdoor Garden In the habitable spaces above , Private spaces like kitchen, dining and bedroom are accommodated at the inner side of the house while the front portion serves the client interactive nature and hence contains Semi- Open Spaces on both the sides that helps connection with the neighbours with a double height Living area in the centre. Within the centralised connecting spaces lies the prayer area which can be looked up to from the 2nd and 3rd floor. Further, on the third floor, the Home Office is at front merging with the terrace garden on the sides. The spatial Organisation brought with it the biggest climatic challenge the front facade with large surface areas stood exposed to the West side intensifying the heat gain throughout the day.

The analysis led us to select BRICK – a module that is raw and natural just as the client, and could help create projections reducing the heating effect.

A brick façade with bulges protruding in and out was selected. As the façade majorly needs to shade the central indoor environment the two ends are straight without bulges, giving the undulations in the centre a firm hold.

The central portion was divided in three parts each having 3 bulges in a series. To structurally hold the huge façade of 83 layers, vertical and horizontal reinforcement was added.

The chosen form served dually:
• Individually the brick module shaded itself.
• Convex bulges in the wall would shade its lower concave bulges, doing the same shading thing at larger level

The house is a perfect epitome of how a plane curtains itself. It stands out and connects to surroundings – both at the same time! The brick façade provides an ideal backdrop for the living area and major interaction spaces aesthetically adding simplicity and integrity to the design.

Overall the expression of house is response to client’s affinity for nature. It’s an outcome of seeking sustainable and functional amalgamation for the living environment.

Previous
Terasas 27: A Concept Design for an Apartment Building in Montenegro by SanJay Puri Architects

Next
Watch the Honomobo Modern Shipping Container Home Get Installed