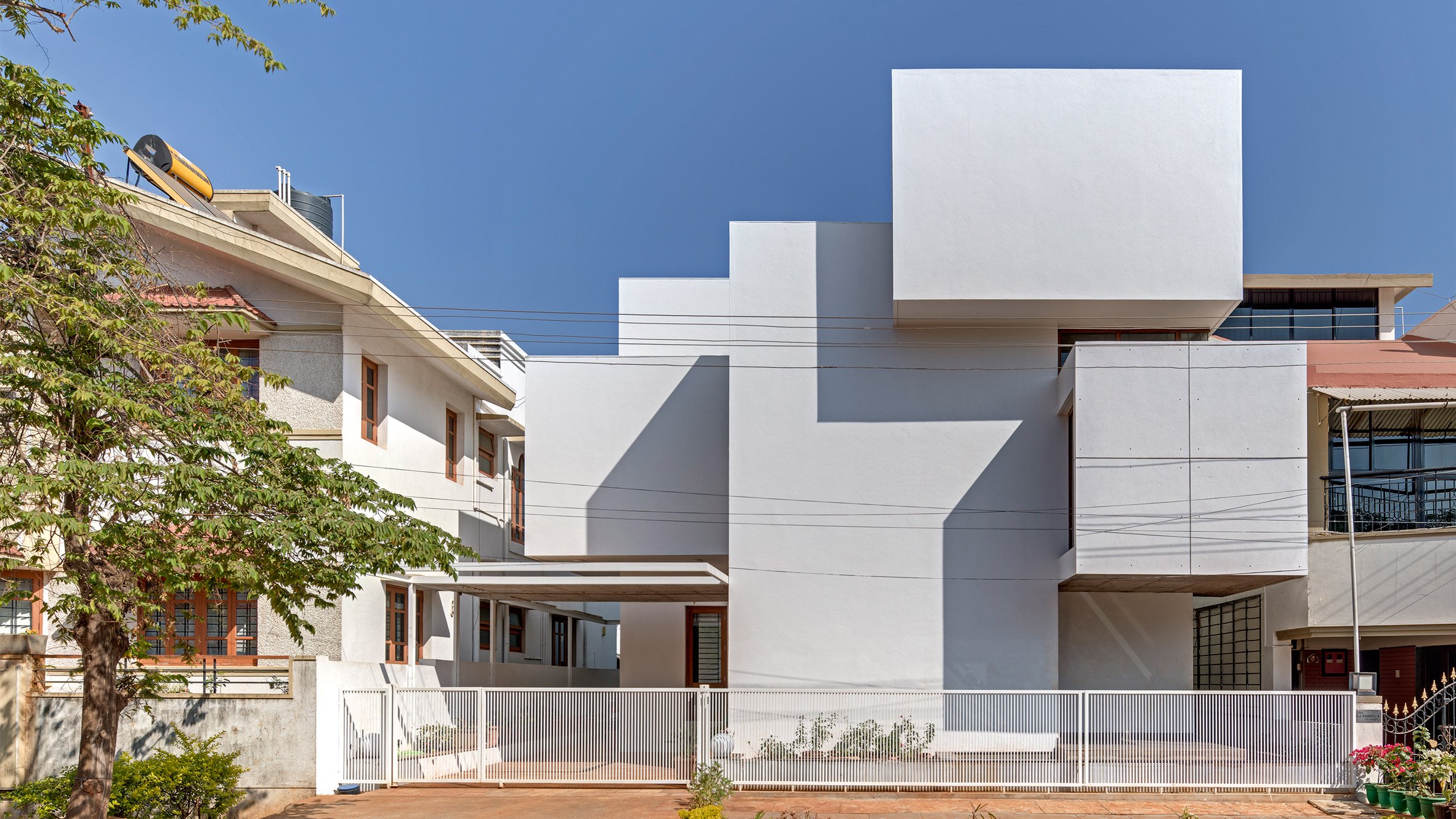 Padival House is 4 bedroom courtyard house in Belgaum, India that features a sculptural facade of staggered blocks which shield the house from street views and help maintain privacy.

A young couple and their 2 children, originally from Mangalore, a coastal city of south India, approached us to design their home. The brief was to build a clean modern contemporary house. Padival house is a private dwelling located in the south of Belgaum in a gridiron neighborhood with the streets running north-south. The site is rectangular, west facing with an 24m major road.

In Mangalore, the courtyard was an integral part of a traditional house. We chose to vividly reflect the memories of a courtyard, readapting the vernacular typology to a house in an urban context. The program is organized into spatial compartments around the courtyard based on the function they are designed to serve. Each of these compartments further evolves into primordial geometric masses. The idea was to create a more pure form of architecture – of architecture stripped of its non-essentials, reduced only to its basic elements and the feelings that the space itself evokes.

The walls of the private spaces around the courtyard are kept low with glass continuing to touch the ceiling. The courtyard thus flows into the bedrooms, blurring the boundaries of the courtyard while establishing a connection with the internal spaces of the house. The spatial strategy is designed to visually connect spaces to allow a sense of communication. The concrete ceiling is left exposed to add a sense of informality in contrast to the smooth white plastered walls.

A flight of sunbathed stairs from the family room lead to the ‘Barsati’ which transitions into the living room terrace through a semi open verandah. The ‘Barsati’ also acts as a pantry to serve for the terrace parties that the client usually hosts.

Light percolates into the building through strategically placed fenestration, in some places touching the roof, allowing an unobstructed flow of view to the outside. Two major light wells, the courtyard and the skylight above the stairs in the family space display a subtle, perpetual play of light and shadow creating a high sense of order and visual impression. Light as a building material is sculpted carefully to define spaces and their functionalities. As the sunlight changes throughout the day, the shadows make the space dynamic and ever-changing across all seasons. The perception of space varies depending on where one is standing in relation to the light wells.

The interiors and furniture designs are heavily inspired by contemporary Indian artist SH Raza. His approach to color, line, space and light, the geometries in his paintings, all reveal a deeper understanding of emotions. Concrete, white plaster, brass, wood and natural stone became the color palette for the interiors.

An abstraction of the painting ‘Tanava’ on the floor using colored stone, adorns the living room. It rises into the third dimension with the floating pyramid stools and coffee table set in harmony. The shadows formed by the courtyard skylight empirically reinterpret the patterns of Raza paintings.

The triangular book shelf in the Library, indulges in an amicable conversation with the light each time the sun renders the wall behind. The painting, ‘White crosses’ is sculpted in wood to form the wardrobes adding warmth to the bedroom interiors.

The house is an abstract composition of masses responding to the west sun. The sharp shadows move as the day progresses giving life to the facade. The compound wall is designed to resemble a fabric, very light and absent keeping the composition undisturbed. The house attempts to stand as a piece of art.