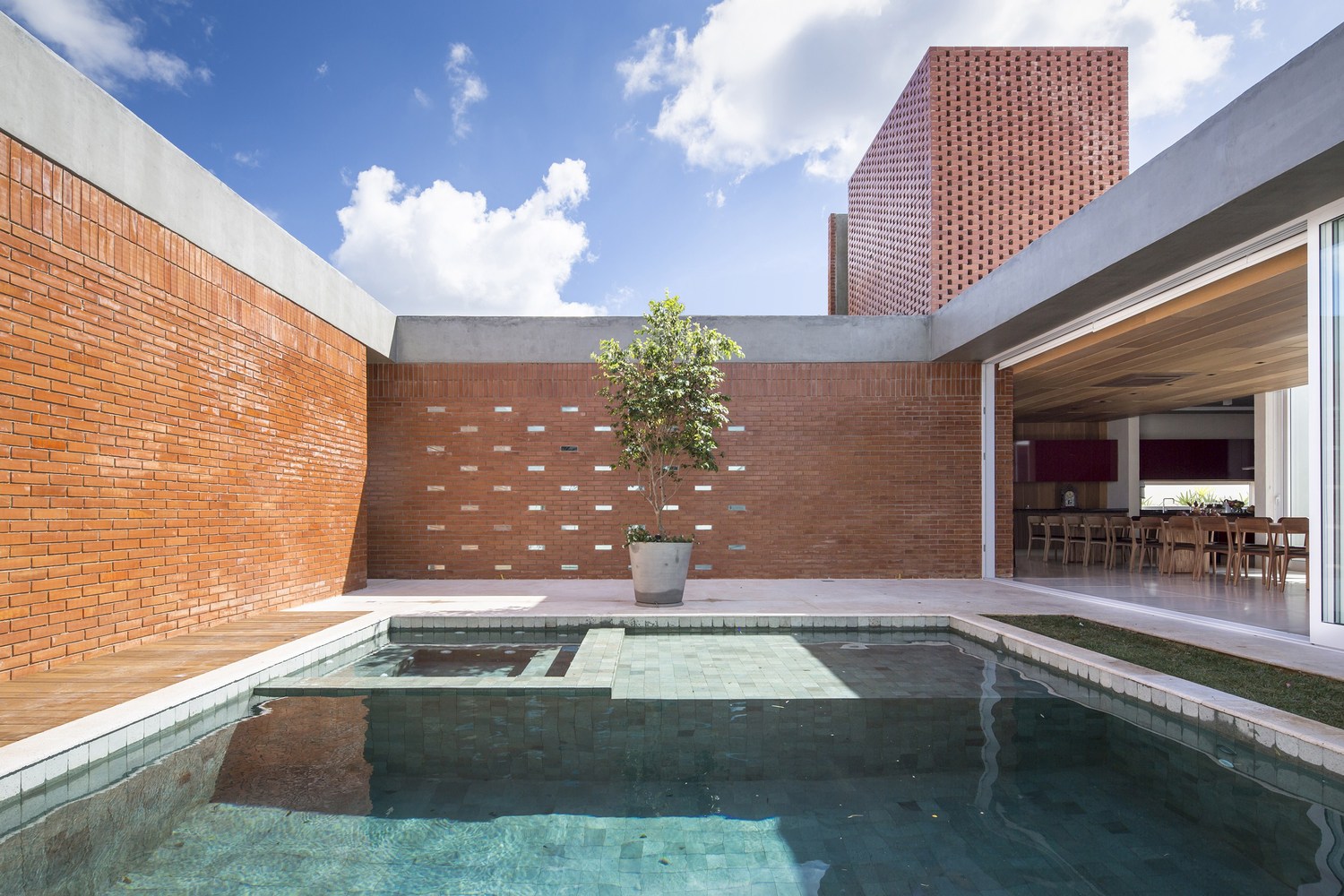 Casa Malva is a Courtyard House in Brazil by Bloco Architects

‘Casa Malva’ or the Malva House is a 360 sqm, 3 bedroom courtyard house in Brazil designed by local Brazilian practice Bloco Architects. The home bears a tropical character and features a u-shaped layout with an open plan living area configured around a small indoor garden court. This living area also opens up seamlessly to a central court with a mid-sized dipping pool and a generous patio.

Here’s a full description from the architects, The site is located within a gated community in Brasilia, outside the urban context of the city and flanked by other houses. We use the highest occupancy rate allowed so as to enable the deployment of the house on a single level, as per the desire of the clients. We explore the views for the interior spaces of the site and create a central courtyard around which revolve the programmatic spaces. The living areas are open directly onto the courtyard, while the bedrooms turn their backs on it and open to the side of the lot. The social rooms of the house are organized in a continuous space, organized by an open central garden.

We seek to highlight differences between the main building materials of the house so as not to create a monolithic volume. We seek to obtain expression of the architecture through a composition of different parts.

The solid brick wall has only a sealing function and has no structure or embedded systems. In the private hall part of the bricks were replaced with massive glass bricks, made especially for the project. These bricks bring natural light and allow small views of the courtyard. They were made by gluing several clear glass slides.The sealing of the tower that houses water tanks and AC condensers consists of the same solid bricks, but their layout is like a “twist” that leaves empty spaces between the pieces and promotes natural ventilation and lighting.

The painted brick walls assume the functions of embedding facilities and part of the concrete structure, and define the secondary spaces of the house such as side walls and garage. The concrete beams are exposed around the entire exterior of the house, crowning the composition. The concrete pillars are sometimes exposed along the walls of solid brick, sometimes embedded in the masonry walls.

The natural wood cladding (tonka bean) in social areas is a surface structured internally by wood and steel beams. The cladding contains air conditioners, facilities and lighting in the dining table and circulation areas. In the sofas and armchair area the cladding is higher, directly on the ceiling and leaving exposed parts of the beams of its internal structure. These beams form a pergola where the indirect lighting system is fixed.