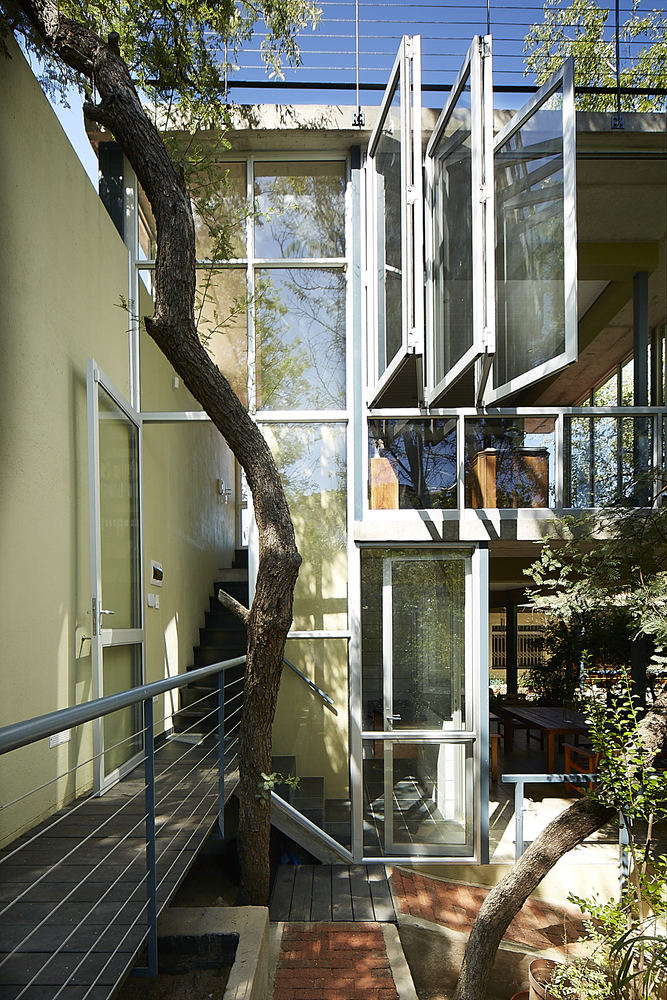 The idea for this tiny studio of about 35 usable square meters was born out of its spectacular setting. The incredibly dense garden is home to everything from porcupines to guinea fowl and slopes down steeply to the dry ravine beyond.

The clients’ insistence that no single tree may be cut required an unconventional approach. The only buildable space available was a 3 x 3m storeroom between the garage and the living room of the existing house.

How to fit in an office and consultation space for the client’s consulting business, which could also function as an independent apartment, and yet respect the visual connection between the existing house and the garden? The garage could have been moved towards the street by 5 meters, opening up enough space for the studio. However, that would have meant to spend much of the budget rebuilding an existing garage, rather than on the actual studio. In addition building on the ground level would have limited the studios view into the garden.

A double storey structure was proposed, transforming the 3 x 3m footprint of the former storeroom into a kitchenette and bathroom. The new first floor accommodates the actual studio, cantilevering over the existing veranda and thus exposing the entire north and east façades to the surrounding treetops. Fully protected from the harsh sunlight, both facades are fully glazed to maximize the feeling of a “tree house” – one of the client’s childhood fantasies. Yet for the balcony the client had wanted there was not enough space. Large sliding-folding windows now create an open corner, transforming the entire first floor into a “balcony” when needed.

The entrance is via a timber deck one meter above the ground floor level. Upon entering, one can take 3 steps down into the kitchen, or continue upwards towards the studio through a double volume. The limited space of the kitchen required the staircase to the first floor to become a piece of furniture, accommodating the kitchenette with fridge and sink below. Other built-in furniture is designed to maximize usable space and create useful storage areas. All built-in furniture is made of solid, local Prosopis hardwood, beautifully finished – either charred or natural – contrasting the more “cold” finishes of the walls, windows, ceilings and floors.

A large single concrete column is the main support for the two concrete slabs above, and connects ground and first floor visually. Other supports have been designed as steel elements, as thin as possible, and set back from the facade by one meter to emphasise the cantilevering effect. The quality of the workmanship did not allow for all exposed concrete walls to remain in their rough state as originally planned. Thus some elements were painted in varying hues of green, blending in with the tones of the garden outside and blurring the transition between inside and out. Carefully placed openings on all four sides of the building allow for maximum cross ventilation and enhance the sense of spaciousness.

Ultimately, the most satisfying recognition is that of the client herself. After enduring the frustrations typical of a building site in and around one’s house, she now has a workplace in the treetops: stimulating not only to herself but also to her clients that come to visit now and then.