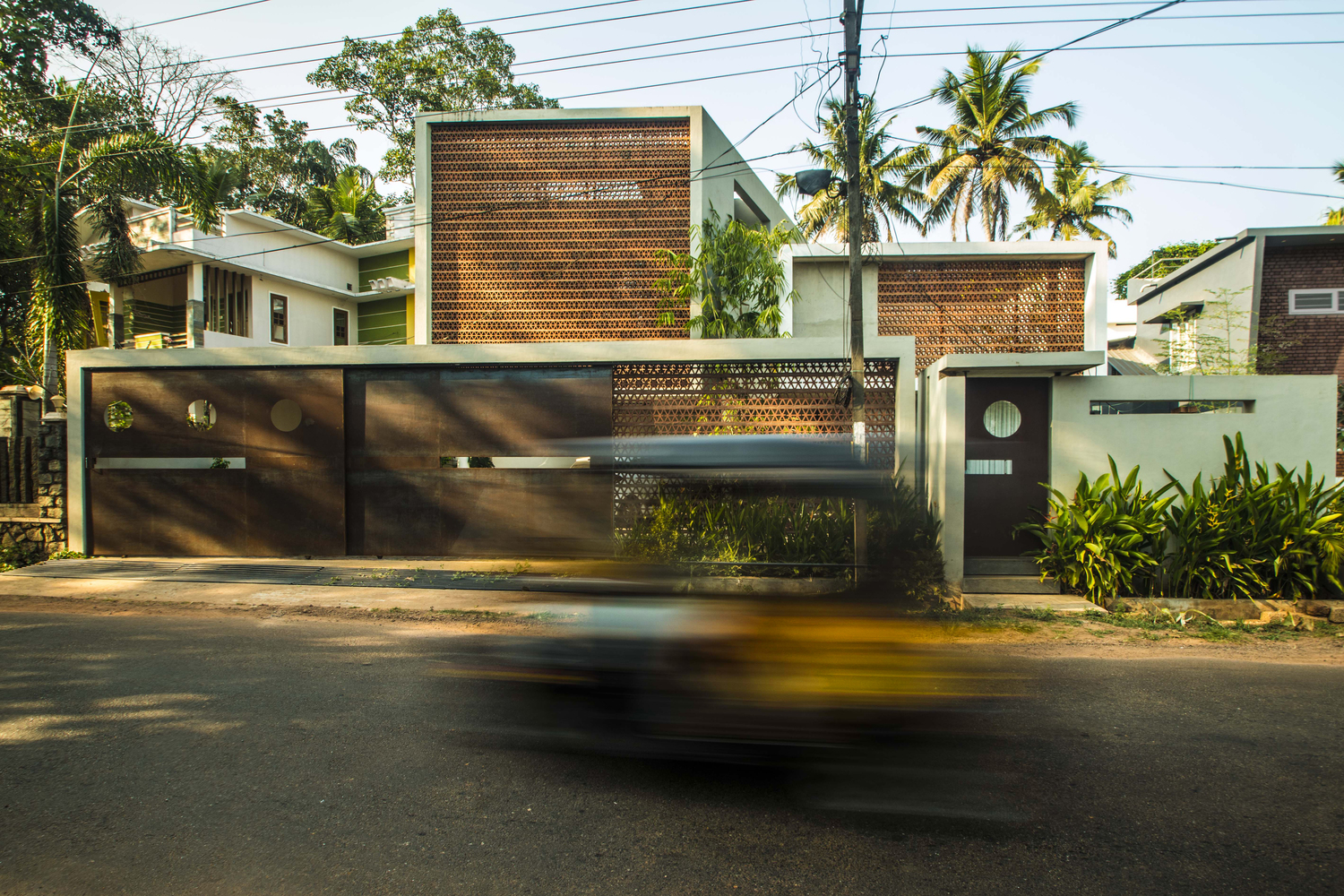 Buoyant Hue is a house that is set adjacent to the lush green paddy field, grabbing one’s attention from very far itself with hued perforated blocks or jali screens ornamenting its front facade. These perforated blocks function as a barrier against the harsh south sun and also aid in capturing the wind from the nearby fields thus maintaining a cooler microclimate inside.

The client brief called for a simple yet modern house that could accommodate a family of 6 and required ample green spaces. The proposed site measuring (16mx 24m) had its south side abutting the road and nests in between two residential buildings to the east and west.

The design was a primary response to the context and kept in mind to retain the two existing coconut trees that added a charm to the site. Open planning played a key role to ensure a seamless flow between the spaces along with natural lighting and ventilation that accentuates the overall experience for the users. Both the axes of the house were aligned in such a manner that they opened toward green space. The large doors and partitions complemented the openness and framed views toward these axes. The ground floor houses the living, dining, and kitchen areas along with the parent’s bedroom toward the west and the guest bedroom towards the north. The toilets were designed with a courtyard in them thus ensuring a well-lit and green space.

The formal living could easily be separated from the other spaces by a movable door that ensures optimum privacy for the family. Also, the lower ceiling heights increased the sense of intimacy and comfort within the house. The courtyards adjoining every space in the house provide a special sense of serenity with a panorama of picturesque plants that allows us to bring a little piece of the outdoors inside thus making nature a part of it. The exterior courtyard in the parent’s bedroom blurs the boundary between the outdoors and indoors and acts as a personalized nature retreat for the elderly couple. These skylights also function as stacks for the hot air to escape and ensure proper ventilation within the house.

The entire charm of the house lies around its stairs which had to be something transparent to let light enter through them for the courtyard beneath it. Hence stairs designed of customized steel became an aesthetically pleasing solution to the functional issue posed by the situation. Another striking feature is the hanging slab that appears to hover from single support in the family living ensuring an uninterrupted flow between the spaces on the ground floor. The design of both the stairs and the hanging slab provided us with an opportunity to explore the unknown. The first floor houses an upper family living, a bar counter, and a utility room along with the master bedroom and the kid’s bedroom. The entire material palette is kept minimal with Kota stone flooring, teak wood, and exposed concrete ceilings that add a raw and expansive feel to the interiors.