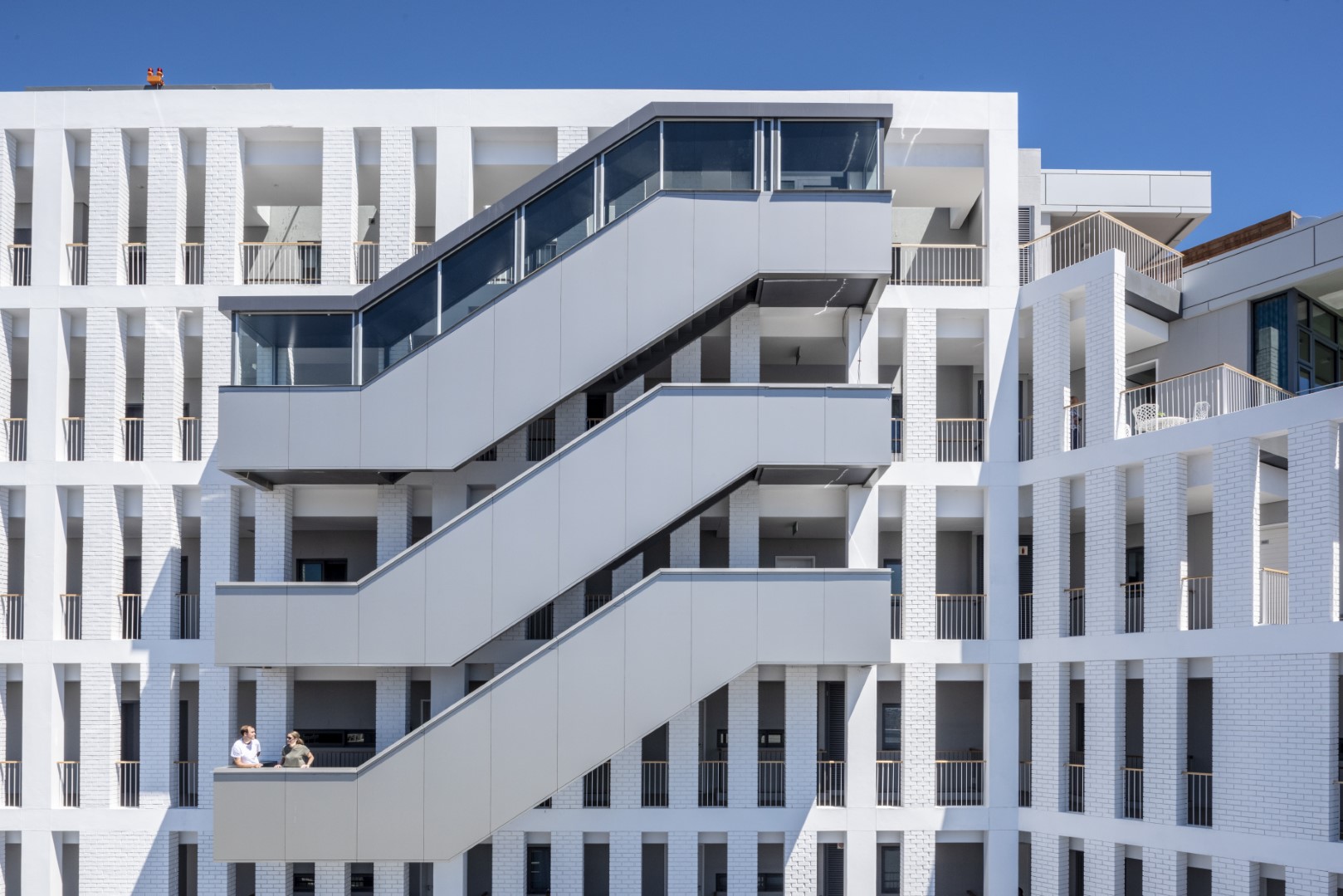 How Adding Exterior Stairs Can Enhance Your Building Design

Every building consists of numerous components. You’ll often see terraces, walls, and sometimes columns, but most importantly, you’ll find a lot of stairs, especially in a building with numerous floors.

Stairs serve as a means of transport for the building’s guests and tenants, which might lead you to wonder why some buildings have stairs outside the structure. While exterior staircases may seem like a simple addition to a building, in reality, this component plays a vital role in a building’s overall functionality. This is because it provides tenants a quick route to the building’s exit in the event of emergencies like fires and earthquakes. It serves as an additional safety precaution to a building, but it can also contribute to its overall design.

What (Really) Is Building Design?

People often think of design as something that deals with the aesthetics of an object, which, while true in the grand scheme of things, doesn’t always apply to a building design. To be precise, building design refers specifically to the overall performance of the building, which can be evaluated using many factors, and aesthetics is just one of them. But mainly, it concerns other aspects, such as energy efficiency, HVAC performance, accessibility, and most importantly, public safety. This article provides reasons as to how exterior staircases can improve a building design:

One of the many reasons why building designers often include exterior staircases in their plans is that they can enhance building design by adding an extra safety precaution to the building. Since exterior staircases lead directly to the ground floor, evacuation would go a lot smoother in the event of emergencies where other routes are blocked off or are unsafe, such as elevators and escalators. It’s also one of the reasons why despite the convenience of elevators and escalators, stairs remain a vital component in every building.

Furthermore, building designers follow a particular code when adding exterior staircases into a building. The exterior stairs code is a series of regulations set by the International Building Code (IBC), which aims to establish a standard among builders and contractors when it comes to the materials, design, and other aspects of a project.

Since designers will most likely adhere to the IBC when installing exterior staircases, people can rest assured knowing that a building’s outdoor stairs would always be made of materials that are highly resistant to impact and heat. Additionally, they were constructed by following the correct process, so they should be sturdy enough to withstand earthquakes and other natural disasters that may require the need of immediate evacuation.

However, remember that’s not going to be the case 100% of the time. That’s because buildings like residential homes and living spaces install exterior staircases purely to add a means of transport from the top floor to the ground floor without taking up space inside the property.

They Don’t Take Up Space Inside The Building

In the preliminary stages of building plans, one of the many things designers often have a hard time dealing with is how and where to place the staircase inside the building. After all, stairs usually take up a lot of space inside buildings, which is quite unfortunate for those making do in a relatively small living space. That’s precisely why new stair designs like spiral and U-shaped stairs were developed—to minimize the space it takes within the property.

The good news is, exterior staircases aren’t the same as the typical stairs. Since they’re located outside the building, you don’t have to worry about having your space reduced. In other words, you can enjoy the benefits that exterior stairs bring to the table without having to deal with the disadvantages that come with installing stairs.

Encourages The Use Of New Technology

The IBC has numerous principles, safety being the most important of them all. But that’s not to say the other principles aren’t worth mentioning. The exterior stairs code, in particular, emphasizes the importance of embracing new technology, which in this case is the ability to adapt to new designs. That’s why every now and then, you’ll see a few buildings with unique exterior stairs, like the spiral designs or the L- and U-shaped varietals.

Of course, that doesn’t mean the code blindly supports these new designs. It simply encourages building designers and engineers to be open to the idea. The most practical option would still be given priority over anything else, especially considering that safety is their number one priority.

Used As Entry And Exit Points To And From The Building

In public buildings, you’ll often find a staircase that leads from the ground level to the highest floor of the building, aside from elevators or escalators. But to get to these points in the building, one must first enter through the entrance, which is usually a door of some sort. In short, to get to the floor you want to go, you need to enter through the entrance and get in the elevator or walk up the stairs. With exterior stairs, however, you can skip a few steps.

Instead of the previous series of actions, you simply walk to the area where the exterior staircases are located, which is usually at the back or side of the building and walk up the stairs. By doing so, people can get to their destination within the building without disturbing other tenants.

Similarly, people from the top floors can immediately proceed to a lower floor without the hassle of waiting in line. Put simply; exterior stairs can greatly enhance the building design in terms of efficiency and accessibility—especially for properties that accommodate various tenants and guests.

Enhances The Overall Aesthetics Of A Building

With all things considered, exterior stairs are still very much fashionable, so it’s highly likely people would see this component as an improvement to the building’s aesthetics. This is especially true for those who like showing off their creativity or wealth and striking awe into people that may visit them in the near future. In fact, among the many areas of a building or a home, guests usually look at the stairs within the first few seconds of their visit.

Alas, exterior staircases won’t always be a great addition to a building. It largely depends on whether the designer can successfully pull the project off. On that note, it might be best to end this guide with some tips to help you maximize the potential advantages of exterior stairs.

One of the most obvious ways to improve the performance of exterior staircases is to simply install handrails. Doing so would lower the chances of people getting pushed aside and falling from the stairs, which is highly likely considering the panic and chaos that emergencies can cause.

Moreover, it also allows people to get a firm grip, which would further reduce the possibility of sustaining an injury from a fall or slip. It’s also helpful for seniors and young children who may need extra support when going up and down the stairs.

Pay Attention To The Color Scheme

Designers often choose the color that’s most appealing to the eyes, but the color scheme of the stairs actually has a considerable significance in its safety. That’s because if the steps are painted using a dark color, individuals would have a hard time perceiving the depth of each step, which can lead to trips or slips. With that said, the ideal choice is to go for light or vibrant colors such as cyan or lime.

Finally, when choosing the material to be used for the stairs, it’s essential to choose one that has a relatively rough surface since smooth surfaces would only result in a higher risk of trips and slips. That’s precisely why concrete and metal, both rough substances, are the most common material used in the construction of staircases.

If you know the exterior stairs code, you’d know that the tips mentioned above are standard procedures among building designers. For that reason, if you’re planning on adding exterior staircases to your building or your home, you might want to learn about IBC’s standards first.

While safety is the main purpose of exterior staircases, they can also serve as a convenient alternative route to tenants and may also improve the overall appeal of the building.

Of course, there’s no guarantee that the building design would truly see an improvement if you install exterior staircases. You have to do it properly. Otherwise, it may result in the opposite effect, which is precisely why the exterior stairs code exists. With this guide, you should be able to deal with the majority of problems people often face regarding this project.

Next
The Barlow Coat Hanger by Wood Tailors Club